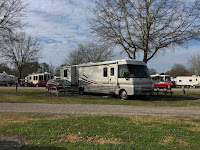 We arrived in Cropwell, AL on St. Patrick's Day. This is the third time we have stayed at the Lakeside Landing RV & Marina. First time was March 2017, with beautiful weather and the second time was in December 2017 with 3" of snow, as we headed to Florida. This time, March 2018, the weather was chilly and rainy. We never unhooked the car so it was a quiet two night stop. 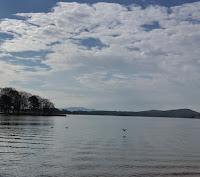 As the name suggests the park is right on the water which makes for nice morning dog walks. The majority of the park is full time residents, most are kept up pretty well. The sites for overnight are all pull through, gravel with a patch of grass and a picnic table. The WiFi is spotty and our Verizon signal was just okay this time. We paid $29.70 a night with our Good Sam discount. 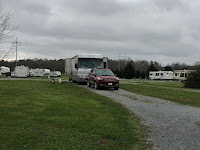 March 19, 2018 was moving day. We headed to Athens, AL for a four night stay. Northgate RV Travel Park was home. 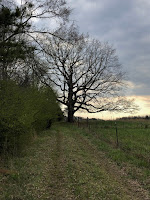 It is a smaller park with all pull-through sites. Sites are gravel with grass and wider than normal. The park is well maintained and quiet, with an occasional train. We paid $30.00 a night with no discount. 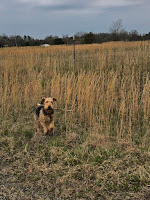 They have a nice grass path that is perfect for running the dog off lead, walking all the way to the end, where you will find a creek, and back is a mile.

Florence and Muscle Shoals, AL are about an hour west of here. We explored them both back in May 2016, while staying in Tennessee. On that trip we stopped at the Singin' River Brewery in Florence and purchased one of their glasses that had Florence on it - Nancy's moms name. Well, that glass got broken along the way so we went back to get another one. Of course we enjoyed a glass of beer, had great conservation with the bartender and came home with not only glasses but our howler (half growler) filled with yummy beer. 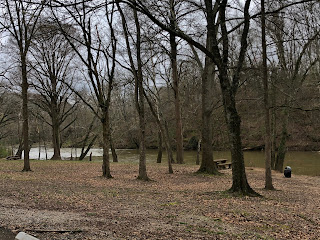 We found this little park so we could walk Mielikki and it was perfect timing as a girl was there with her lab and the two of them had so much fun chasing each other around. 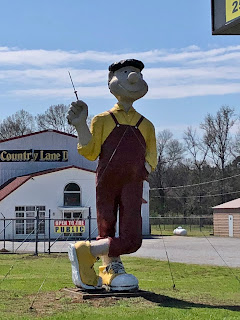 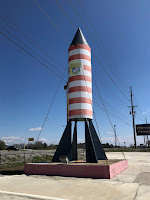 There is not much in Athens, but we did find a few roadside oddities. The Giant Boy stands outside a hardware store and as you can probably guess the Rocket is in the parking lot of a fireworks store.


Huntsville, also didn't have as much as we had expected, but it does have a few fun roadsides. There are also a number of Antebellum homes, the most in the entire state. All the homes are private residences and they do not do tours, but you can do a walking or driving tour and listen to a podcast while doing so. 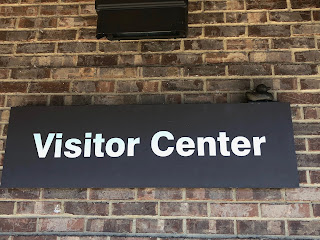 They also have a Lucky Duck Scavenger Hunt you can participate in and win a prize if you find them all. There is a brochure with hints that guide you all over town in search of the small bronze ducks. We found the one at the Visitor Center. 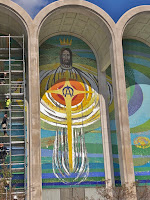 The Eggbeater Jesus, yes that is what locals call him is painted on a Baptist Church. He is being repaired at the moment.

The Giant Jukebox was great fun. As you walk past, it starts to play music.

One of the more interesting places we stopped at was the Dream Maker. It is a rock shop and massage center. The house it is in once belonged to Anne Clopton who was known as the "Cobweb Painter". 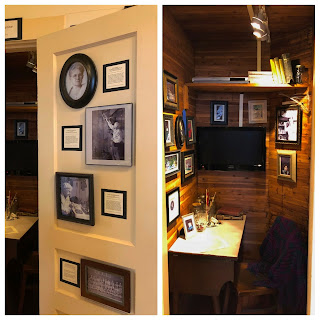 The closet she used as her art studio is still intact just as she left it. Many of her delicate paintings have deteriorated over time, but there are still a few left. 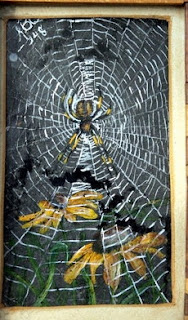 When she was 11-years old she read about a German artist who painted on the webs of spiders. She set out to learn how to do the same thing. With much patience and many years of practice she perfected the challenging process. She found out many years later that the German artist who inspired her had used a much stronger and sturdier web. After carefully collecting webs for a canvas she would delicately apply tiny dots of oil paint and then let it dry before she could continue her work, her pieces took up to 6 weeks to finish, some longer. 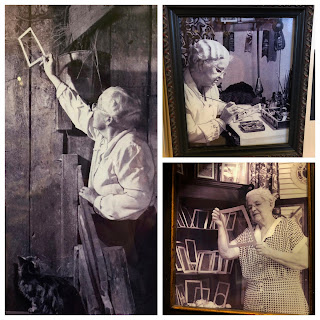 She started teaching in the Huntsville school system in 1894 at the age of 16. She taught Latin, art and math from 1921 - 1943 at the Joe Bradley High School. She formed the first Girl Scout troop in Alabama. After acquiring several war-surplus tents, she took her scouts on yearly camping trips, the first organized camping for girls in the state of Alabama. Anne was also the first women in her county to seek a place on the Board of Education.


In Hartselle, south of Athens we found a unique old billboard. Iron Man is over 100 years old. As the name suggests the roadside billboard is made of iron. He advertises "Vegacal Liver Tonic", one of several patent medicines whose high alcohol content made them popular in dry counties. Seems reasonable that a Liver Tonic would be high in alcohol!!

Our three night stay in Heflin, AL started on March 23, 2018 and the Georgia-bama RV Park was home. Well, actually it is where Les stayed. Due to a family emergency we went our separate ways from Athens. Nancy headed north to Louisville, KY and Les and his co-pilot Mielikki continued on in the RV towards Asheville.

The RV Park was actually a gravel parking lot behind a gas station and a restaurant. WiFi was good and there were places for dog walking. The gravel site had full hook-ups and we paid $25.00 a night with our Passport America discount. 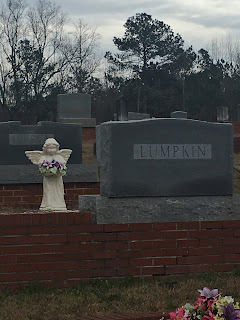 There is a cemetery across the street that made a great dog walking place. "Lumpkin" was a term of endearment that Les had for Nancy back in the day - don't ask why because we don't know.
While the trip to Louisville was for a family emergency - everyone will be okay.

The timing was perfect as Nancy got to see Lilly head off to her Junior Prom. She was so beautiful and has grown to be a smart and independent woman. Plus, we had a visit from a rabbit.
A friend of Lilly's brought him over to play. 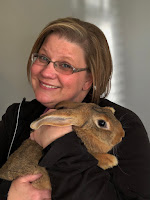 Sunset Camp in Martin, GA was the last stop before Asheville. Les arrived on March 26, 2018 and spent two nights. He forgot to get a picture but based on his description it is probably just as well. Think banjo music! There was no WiFi, the narrow site was dirt with full hook ups. We paid $25.00 a night with a military discount.  On his way to Asheville on March 28th he made a stop in Greenville, SC to pick up a new fender for our tow-dolly so when we leave Asheville our tow dolly shouldn't look so sad anymore. Both Nancy and Les landed in Asheville on the same day.

Tips and things we have learned along the way.
~ You need to know how to do all the chores!
Like most RVer's we have our set "tasks" that each of us does when we take down for moving and then setting back up.
Les generally does the outside set up/take down and Nancy does the inside. As our last two stops of this trip prove, there are times when just one person needs to do it all. So, it is important that everyone knows what needs to be done. This really is a safety concern as well, because something not done correctly could cause some serious problems as you are driving down the road.
It not only is important for moving day but also any time. Back in November when Les was in the hospital Nancy needed to know how to empty the black and gray tanks, and fill the fresh water tank.