We ventured into South Dakota on July 27th. A new state to explore. 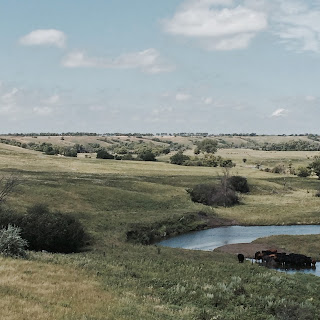 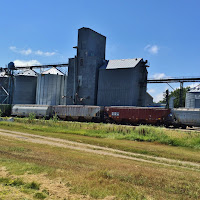 Another fairly short drive. This one had some rolling hills, which is a nice break from the corn and soybean fields. Grain elevators and trains are always part of the scenery. 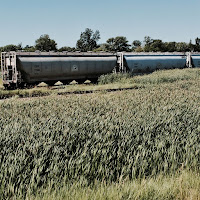 We stayed at the Wylie Camp Ground, which is located within a city park. 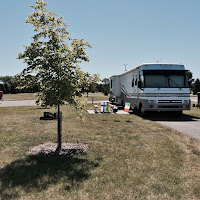 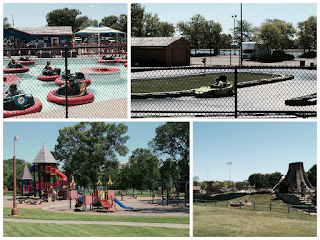 There is so much to do in the park, they have a number of large playgrounds, lots of picnic areas, biking and walking paths, go-karts, bumper boats, putt-putt golf with an erupting volcano, a zoo and Storybook Gardens. Perfect place to come with kids. The office was beautiful, with a nice sitting area and a store with your basic needs. The laundry room and bathrooms were super clean.
The sites were about average size and they have full hook ups to primitive tent camping.

One of the reasons we picked Aberdeen is it is the location of the South Dakota Peter Toth Indian. This one was dedicated in 1981 and is made out of cottonwood. It is at the Fair Grounds, but wasn't easy to find. We stopped and asked a couple of people and even went into the county office on site, but no one knew where it was. They have a small fenced in historical village so we called the number on the sign and discovered the Indian was in the fire house. The guy we talked to sent his daughter over to open the gate for us. We were pretty happy and quite surprised. The Indian is in need of repairs, which is why it has been moved here. It was sad to see it locked away, but glad we got to see it and get pictures. 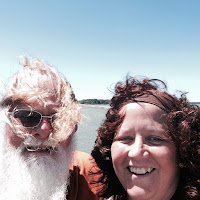 The refuge is small but very pretty. As you enter the park there is a small knoll that you can walk to the top of and see across the lake to the island and out across the priaire fields that surround it. Our walk that day was hampered a bit by the strong gusting winds. We thought we might get blown over. 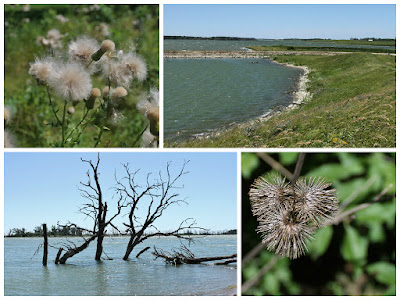 A narrow gravel road takes you across the lake to the island. We didn't see any wild life but had a nice hike. It was free to enter the refuge and a portion of it is handicap accessible. 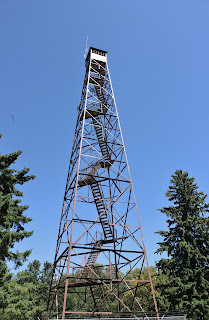 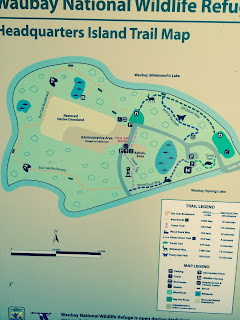 There are hiking paths and a fire tower you can climb that offers spectacular views, or so we are told. Nancy got to the first landing and decided that was far enough. A man came with his two grandchildren, who of course ran to the top - he got to the third landing and waited for them. It is a long way up. 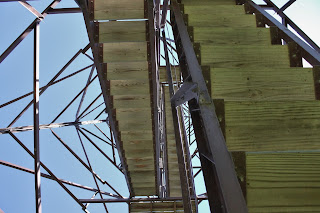 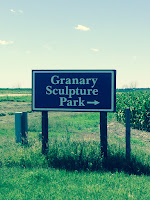 The Granary Sculpture Park didn't show up on any search we did, but we are so glad we saw the sign on Hwy 12. There is a walking path that takes you through the history of the area.

Three historical buildings are on the property. The Granary, built in 1928 by William Sieh to store grain, is now an art gallery featuring artwork from local artists. Putney Hall, built in 1916  was the Social Hall for Putney, about a mile away. It was moved here in 1996 and is used for events and has historical pictures and information displays. 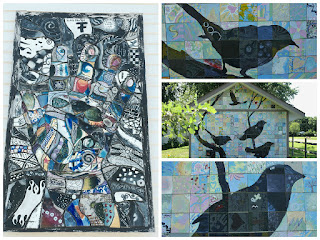 A small tool shed that was on the property, has a mural on it, painted by local art students.

The site was developed in 1994 by John Sieh to honor his parents William and Dorothy. The family donated it to Brown County in 2012 so it could always be kept as is.

There are sculptures and art work along the path depicting the history and the settlers of the area. 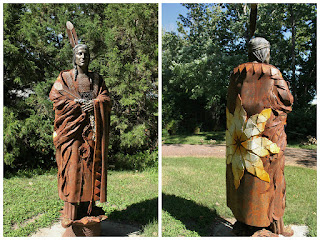 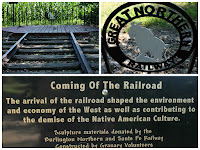 One of the best metal Indian Sculptures we have seen is here, it was created by John Lopaz.

This place was a real hidden gem. The girl working in the art gallery was appreciative of our visit and super friendly. She was heading to Finland in a few days and was excited to find Nancy was Finnish. 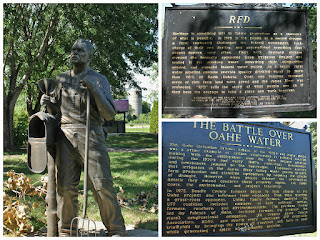 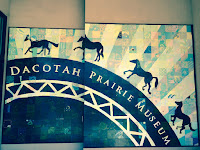 The Dakota Prairie Museum is located in the old Western Union building in Aberdeen. It encompass two floors of the building and covers the history of the area. They have a pamphlet that you use to do a self-guided walking tour. The entire place is handicap accessible. 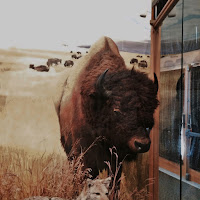 It starts with a diorama of how northeastern South Dakota looked before the settlers arrived, the interesting part of it was that there were no trees in the display. There are still very few in the area, and most of those have been hand planted. 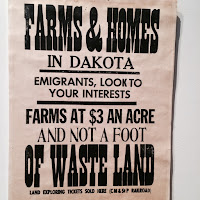 One of the galleries is dedicated to Fred W. Hatterscheidt who was a successful Aberdeen real estate man. He along with his business partners donated the building to the country to be used for this museum

Fred was an avid sportsman and went on many foreign safaris and tours. Most of the animals on display are from his collection. The mural depicts one day on earth, beginning with midnight over the Himalayas on the east wall and ending with sunset over India.

The train, of course was a big part of the 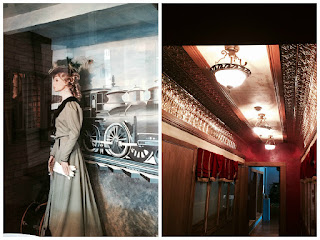 development of the Midwest. One of the hallways was made to look like the inside of a rail car.
Western Union was a way to spread news, much faster than the pony express. 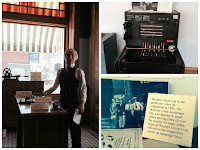 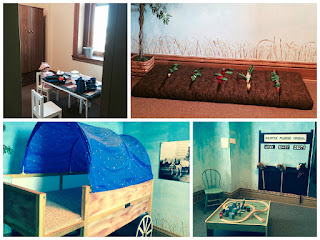 On the second floor is the children's gallery, it has an old general store, covered wagon, garden, clothes line and clothes to hang up, and a room set up like a dining room. All hands on fun for kids. 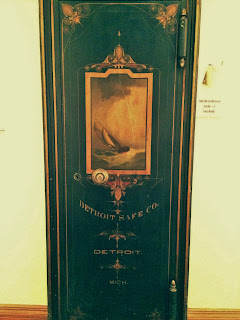 Storybook Land is in the city park that we stayed at and the name pretty well explains it, a park that has lots of statues, and play structures that are storybook related. We thought we would take a quick run through and get some pictures. Well two hours later we were done. It really is a cool place, got to be a kid again for awhile and enjoy some memories of favorite books and nursery rhymes. Nancy found it intetesting that she could remember all of the stories and rhymes but can't remember yesterdays events.

The park is set up on a walking path, with the statues lining the path, some are very interactive and a castle in the center. It is all handicap accessible.
There is a maze, a climbing structure, a number of slides, and a train that you can climb on. Plus a small roller-coaster, a carousal and a tea cup like ride.

There is a train that you can ride that takes you through the park and past the zoo. 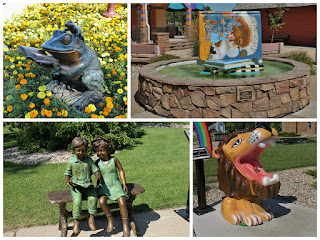 There were additional sculptures through out the park - all of course with a book in them.


Many of the characters are slides and swings. 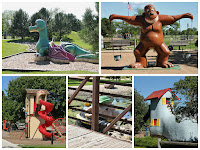 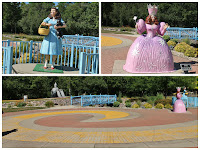 One section is the Land of Oz, and of course you follow the yellow brick road. 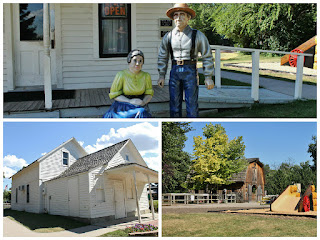 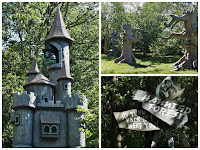 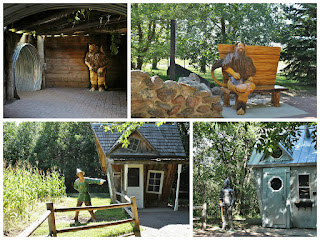 There is an old farm house that you can go into and the back hallway has been turned into a tornado simulator. Kind of cheesy but kids would love it.
A lot of this was interactive as well, there is a large Tin Man slide, and the Cowardly Lion has a den you can walk through.

L. Frank Baum, the author of The Wizard of Oz lived in Aberdeen from 1889 to 1891. Many of the Midwest details in the book came from his time in Aberdeen.


On July 30th we celebrated four months on the road. Four months! We have seen and done so much it is hard to keep it all straight, one of the reasons we keep this blog. We haven't been without problems, but we feel truly blessed that we are able to do this. We have received so much support and encouragement from family and friends which has made this even more special. We have traveled through nine states and have stayed in 16 different campgrounds. We have put 14,335 miles on our car, and 4,000 miles on the RV. Yes, gas is our biggest expense.

Happy Trails to you.

Tips and Things we have learned along the way
~ Invest in a small carpet - or better yet see if you can get a carpet sample square from a carpet store or center. It really saves your knees when you have to kneel down on gravel or dirt. Which is necessary when you are pulling the plastic leveling blocks out from under your RV or trailer, or when attaching your car for towing.
Posted by Nancy B at 8:41 AM