Who knew it would take five stops to get through Washington? On December 13, 2015 we left Hansville and headed to Elma, WA. We stayed at the Elma RV Park, a quiet little park. There are a number of permanent residents but all of the sites are well maintained. The laundry room was clean and they have a propane filling station right on site. The grounds were all decorated with lights for Christmas which made it very pretty. We received homemade cookies when we checked in, it's the little things that make a difference! Nancy forgot to get a picture of our site, but they were a little bit wider than normal so not right on top of your neighbor. 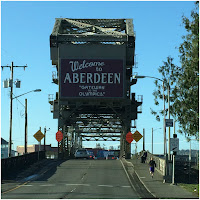 To get to the coast you have to drive through Aberdeen and you cross this bridge each time. It is the funniest looking bridge, it reminded Nancy of an overloaded wagon.

The Pacific Ocean was calling again, thinking that will be a recurring theme over the next few blogs, and we are perfectly fine with that. First day out we drove Hwy 109 up the coast to Taholah, a small town on the Quinault Indian Reservation. 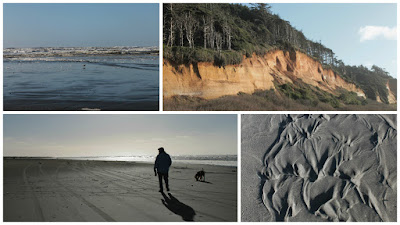 First stop was in Ocean City, were we played on the beach for a bit, until the tide started coming in. Wandering around town we found a great Irish gift shop, Galway Bay, and later we came back to eat at their pub.
We also stopped at Copalis Beach. 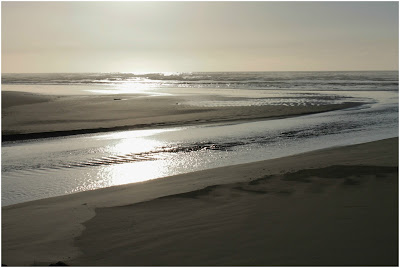 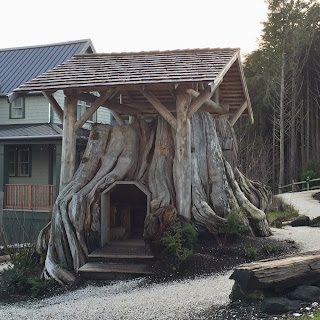 This tree house was in a neighborhood in Seaside, it looks like a fun place to hang out.


Second trip out we took Hwy 101 north all the way to Forks, which by the way is the town the "Twilight" series is based on and where parts of the movie were filmed. No vampires or werewolves were spotted.
We went through the Kalaloch National Forest and stopped at a couple of the beaches. 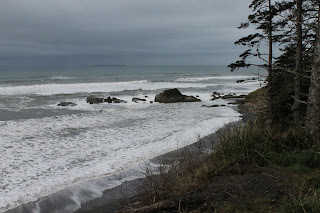 There is an overlook at Beach #1 that is right off the parking lot. You can also take a trail down to the beach, highly recommended. A river runs along side the trail and when you get to the end of the trail, you cross a beautiful wood bridge that takes you over the river onto the beach. 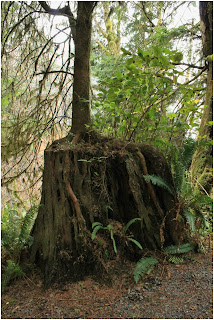 The path is lined with lots of trees, ferns and moss. It always amazes us how resourceful trees are and the crazy places they grow. 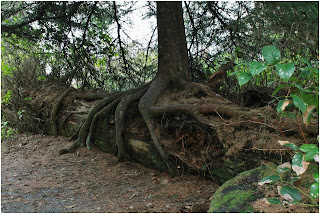 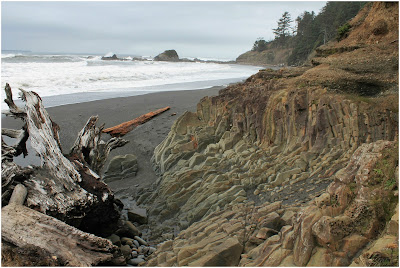 This is where the river comes out from under the bridge - it didn't even look real, the flow of water can accomplish quite a lot over time.

Like most of the beaches this one had ample driftwood and rocks. 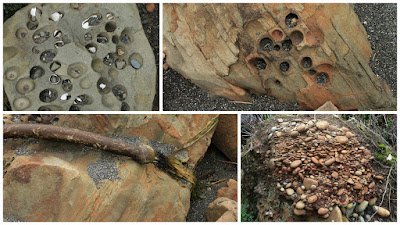 The rocks were full of holes. They are drilled by Piddock Clams, they use a rocking motion to burrow into the sandstone. There were also large groupings of small rocks in the walls lining the beach.

The tide was coming in while we were there and Nancy found herself a little close to the waters edge while trying to get pictures of the waves. She ended up with very wet shoes and pants. 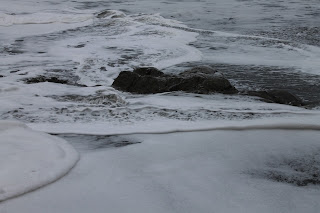 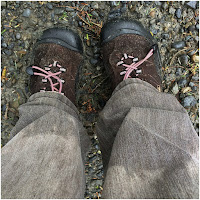 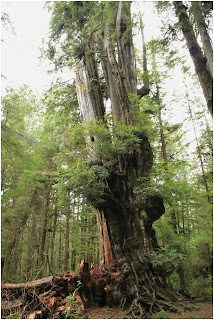 The Kalaloch Big Cedar tree is the stuff legends are made of and looks like a tree from another realm. In March of 2014 a storm took down this giant that is 19.8 feet in diameter and was 175 feet tall. What is left after the storm is still pretty impressive to see. 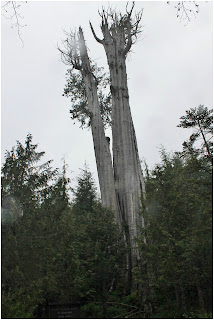 The Duncan Memorial Cedar Tree in Olympic National Park is 178 feet tall and 19.4 feet in diameter, according to one source it is the largest tree in the world, another says third largest, either way it is a very large tree. It was outside of the National park and part of logging company property, but legend says that when the loggers reached this tree they couldn't bear to take it down, so they saved it. It has been damaged over the years by wind and storms but there is still some life in it.

This entire area is known for it's abundance of rain, but sections of the park are actual rain forests. We visited two of them.
The Hoh Rain Forest has a nice visitor center, after entering the building and wandering around for about 10 minutes we discovered they were closed for the season. There were people working on the building and they forgot to lock the door! 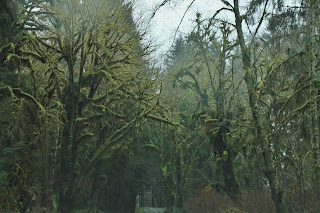 The road in was quite magical.


The trees are draped in a velvet shawl of moss, making every where look like a fairy tale. 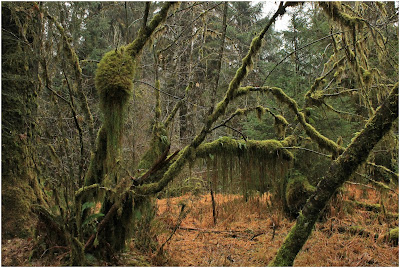 The sign on the crossbeam has an arrow that shows where the rain fall would be if it filled the patio area. 137.60 inches annually - that's a lot of rain. Based on our experience while in this area it never stops raining. 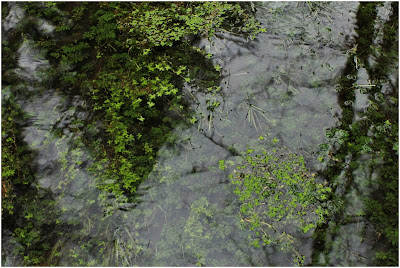 The path behind the visitor center takes you past a small river and pond surrounded by more moss covered trees, stumps and lots of ferns. The pond is full of plants and the tree reflections were in the perfect spot to make it look like they are covered with the plants. 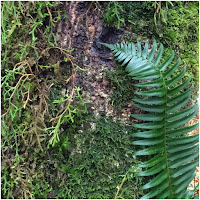 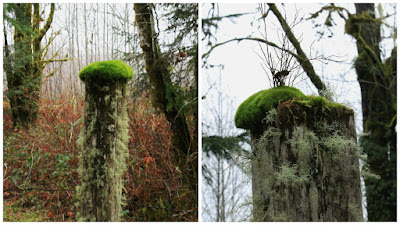 
The Quinault Rain Forest was as mossed covered as the Hoh Rainforest and also offered us some waterfalls. The waterfalls were all road side which made for easy viewing. 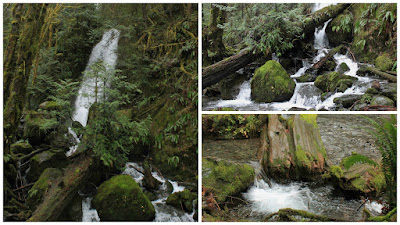 If you want to get close to Merriman Falls it is a very short walk on either side of the bridge. It is a beautiful little spot.

This tree looks like it is ready to take a walk across the river. 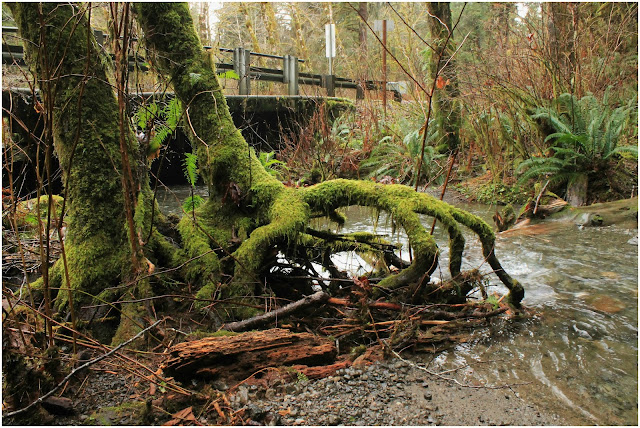 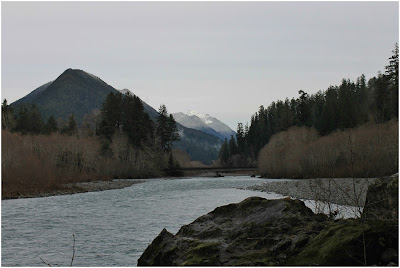 We followed the Quinault River on the South Shore Road and saw the Bunch Falls and a small water fall that doesn't appear to have a name. 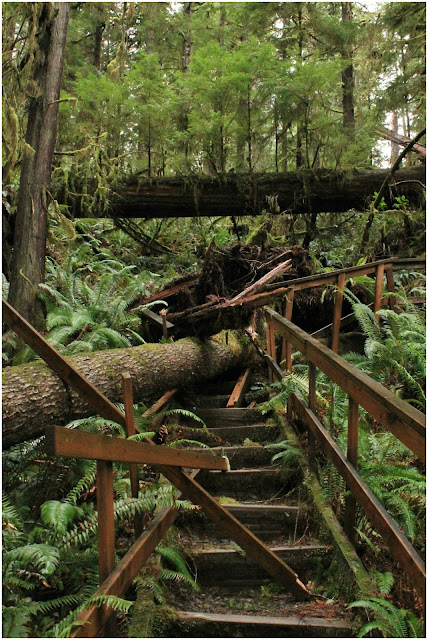 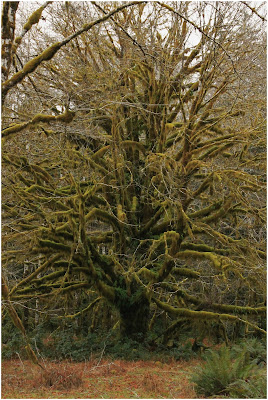 We crossed over the river and drove the North Shore Rd back out of the park.
Stopping at the Quinault Big Cedar Tree. It is a short hike into the forest, once we got to where we think the tree should be we discovered a tree has taken out the stairway. We loved seeing the fallen tree with all of the trees growing out of it. The fallen trees that host new growth are called "nurse trees". 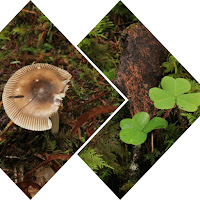 There are lots of fun things to find on the forest floor, and more than enough moss covered trees to keep any photographer happy.


This is our last stop in Washington, next we will be heading down the Oregon coast on Hwy 101 to Tillamook.

Tips and things we have learned along the way.
~ Mold. Our new bane of existence. After being in the rain for over two months now we are experiencing problems with mold. The last tip addressed dehumidifiers, which are helping but we are still getting some mold in places. One of those places is the wall behind our couch. The couch is bolted down so that it doesn't move while driving, which is a good thing, but makes cleaning behind it rather difficult. The couch is a sofa bed and even opening it up it is still hard to reach certain places. 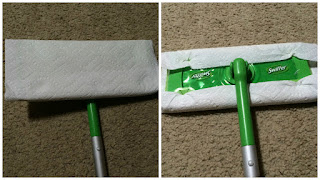 Our solution was to wrap paper-towel around our Swiffer(r) floor mop. We sprayed the mold cleaner on the paper and washed the wall like we would mop the floor. So far it seems to be working like a charm.