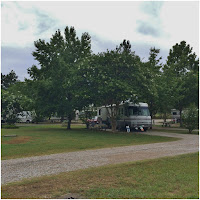 Happy Birthday America! We traveled to Shannon, MS on July 4, 2016, this was a long drive, just shy of 5-hours. Shannon is 8 miles south of Tupelo.  We stayed at the Natchez Trace RV Park, which is just off of the Natchez Trace Parkway. The Parkway runs 444-miles through 3-states from Natchez, Mississippi to Nashville, TN. It was established as part of the National Park System in 1938, but wasn't officially completed until 2005. Now that is a long construction job.
The RV Park is a mix of long-term campers and over-nighters, with about 30 sites and a mix of pull-throughs and back-ins. If you plan to stay here ask for site 5, the best one in the park and we were lucky enough to get it. There is a large grassy area right out side your door, with trees for shade and no neighbor.
The sites are gravel and level, there is a small picnic table and the water pressure was great. We were very grateful to have gotten this spot. The trees kept us much cooler than we have been in a long time. There are sites without trees for those who want to use their satellite. The park is very quiet, there are two small ponds which are home to a family of geese, and two nature trails give you a nice place for walking. There is a small swimming pool with a only a few chairs, but it was clean.
The laundry room is in a small log cabin, fairly clean but a little dusty.
There is one of each machine so don't leave a lot of laundry to do here, a dollar a load and you pay on the honor system, not coins in the machines. No WiFi on site but our Verizon hot-spot worked well enough for web-surfing but not strong enough to load pictures and such. We paid $26.00 a night with the weekly rate.

Memphis, TN was explored on this stop. We had planned to do much more in town but the two stops we made took way longer than expected, but we had a great time. 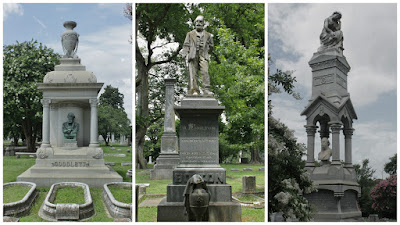 First up was the Elmwood Cemetery. The monuments were incredible. So many of them were busts and statues of the deceased. Never seen anything like it. The detail on some of them was unbelievable. 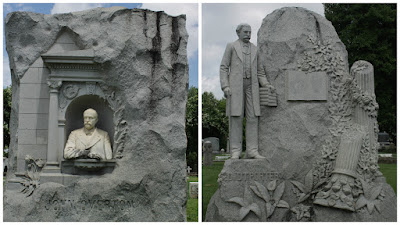 The cemetery opened on August 28, 1852. A number of Memphis elite are buried here, along with Confederate generals, victims of the Yellow Fever epidemic of 1878 and Robert Church, the South's first black millionaire.

This is one of the best kept cemeteries we have been in, very few broken or worn tombstones. Once again it was fun looking for the symbols we learned about in Nashville, TN. This is the first weeping willow trees that we have seen that are still intact and recognizable. It was used a great deal up to the 1860's and represents mourning and sadness. The clasped hands mean farewell and devotion to the departed. 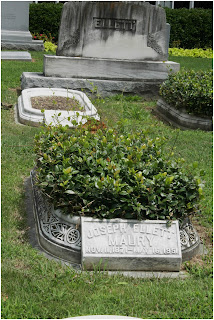 There a number of grave sites that are like small gardens, many with shrubs or flowers in them. The concrete boarders range from plain to very ornate. We have never seen these before and can't find any information on them. 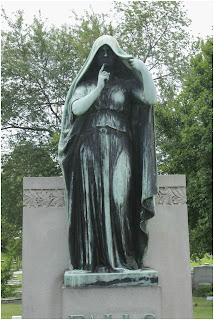 Angels and female statues were popular as well as the figure of death. 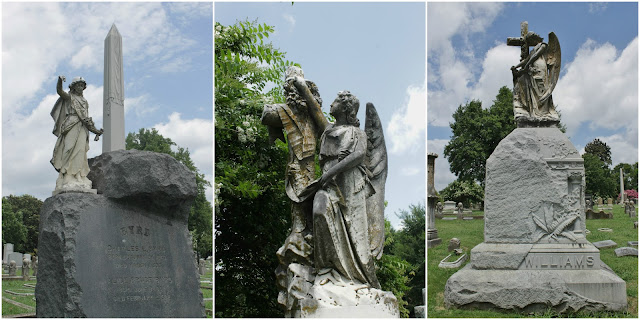 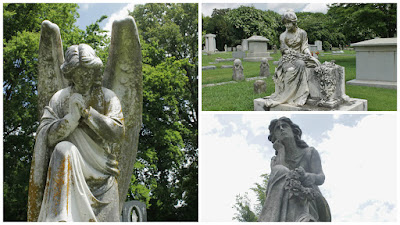 The angels came in all shapes and sizes, most made from concrete but a few are bronze. 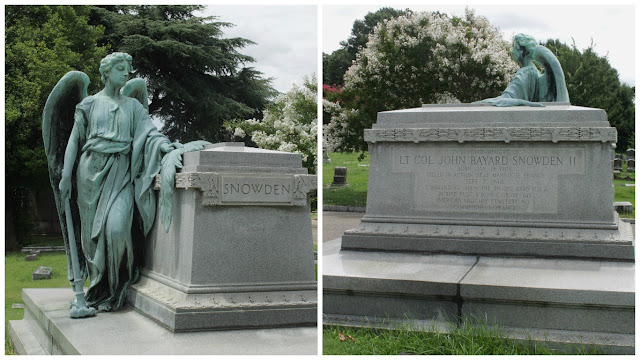 Nancy has added a book on Cemeteries to her list of things to do, we may have to take a sabbatical to get all of her projects done.


Next up was the Mud Island River Park. 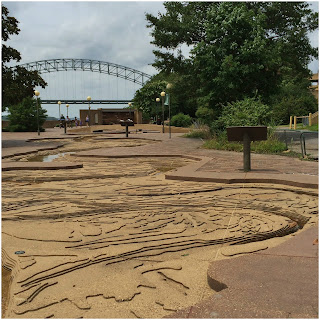 This place was so interesting. It is an exact scale replica of the southern half of the Mississippi River, where it meets up with the Ohio River at Cairo, IL. The entire park twists and curves with the river, following every turn and all of the different depths and side rivers and islands. 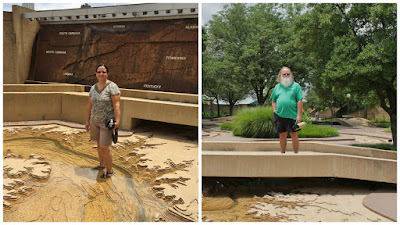 There are bridges so you can walk across from side to side. Or, you can walk in the river. Along the way are informational boards telling you about the different cities the river goes through, the history of the area and more. Twenty cities are mapped out, showing landmarks and even the bridges that cross the river. 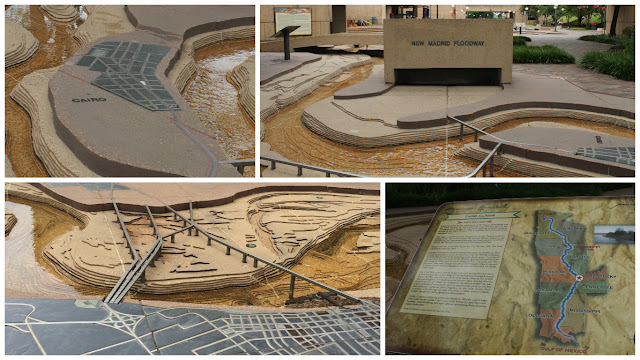 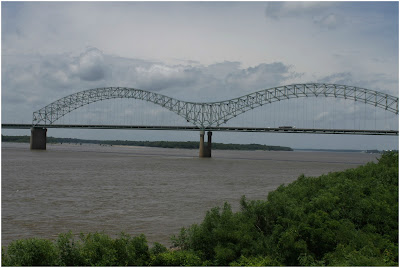 It was fun "walking" through the cities we have been to and finding all the sights. The park is on the actual Mississippi River bordering Arkansas. 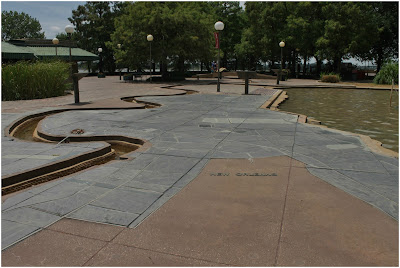 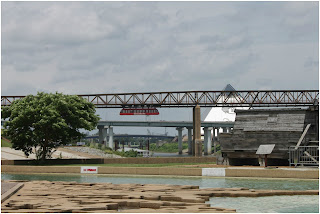 There is a parking lot on site, or you can park downtown Memphis and take the tram car across the river. The park is handicap accessible.
The"1,000" mile river journey ends at an acre sized Gulf of Mexico. The park was designed using Corps of Engineers survey and navigational charts. The 1,746, 4 x 8 concrete sections are installed to allow the water to flow from north to south and the water levels mimic what is currently happening with the river. 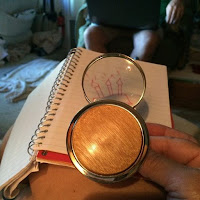 We stopped at a Farmer's Market on the way out of town. They have been few and far between on our travels, so we are always excited to find one. Nancy got an early birthday present at this one, a beautiful wooden magnifying glass. 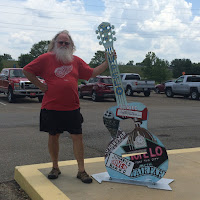 This is the birthplace of Elvis Presley, so there are a number of music related things in town. Music notes and metal guitars can be found all over town. While neither of us are huge Elvis fans and really had no desire to go to Graceland while in Memphis we did stop at his birth home and wander the grounds. 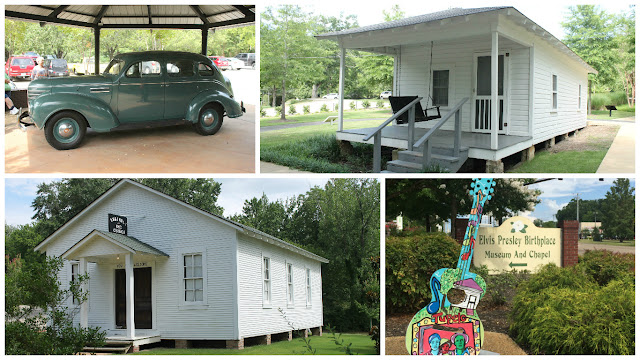 The 2-room home that he was born in sits on it's original site, the Assembly of God Church where he attended and started singing was moved to this location. 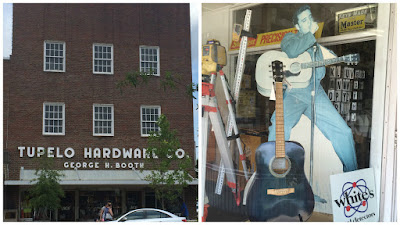 Tupelo Hardware is where Elvis's first guitar was bought. His mother persuaded him to look at it instead of the rifle he wanted. His pastor taught him how to play it.  Elvis's family moved to Memphis in 1948 and the rest is, as they say history. 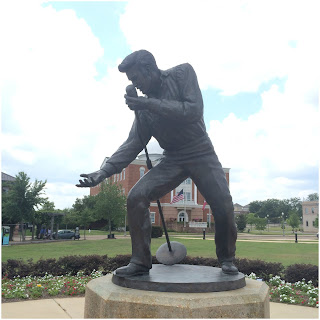 Ten years later Elvis was back in Tupelo to hold a concert to raise money for a park, that park has a statue of him in the center of it. 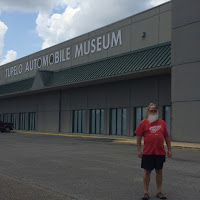 The Tupelo Automobile Museum was a fun place. The self guided tour takes you past 100 antique, classic and collectible cars laid out in chronological order. You get to see the progress of the cars design and engineering over the last 100 years. It was very interesting, but rather sad how mundane cars of today are, they all look the same, certainly wasn't the case in previous years. 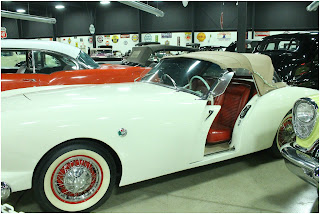 Another interesting car was the 1954 Kaiser Darrin. This is one of the 435 that were made. The original cost was only $2,550 and it is so cool that it has a sliding door! Our first thought was how quickly it would stop sliding in a place like Michigan that use salt on the roads in the winter! 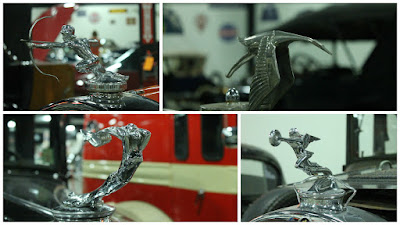 Once again Nancy had a book idea while snapping 400+ pictures today - she was fascinated with the hood ornaments and radiator caps. Yep we are gonna need a sabbatical! 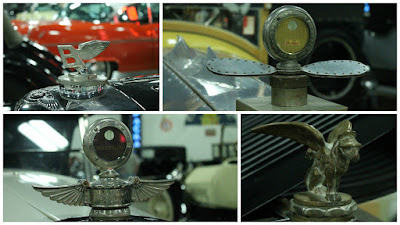 Nancy had a short run with the bug Les had in Mongomerty. Luckily she was only down for a day and a half. Unfortunately it was the day we were heading to Muscle Shoals, AL to meet up with a co-worker of Les's. Les headed off on his own to have lunch with Bill Davis while Nancy slept.

He visited the Muscle Shoals Sound Studio, they are not doing tours due to construction but he was able to visit the gift shop.

Tips and things we have learned along the way.
~ Be a good neighbor
Being a good neighbor in a campground is very similar to being a good neighbor any where else with a few extra things.
~ Keep the noise down - when you are sometimes only 10-feet or less from your neighbor, noise can be a real issue. Watch your voice volume along with the radio and TV. This extends to pets too, especially barking dogs and running your vehicle.
~ If you are a smoker try not to sit under your neighbors window while smoking - sit closer to your own trailer.
~ Don't spread out into your neighbors space. Keep your things on your site, bikes, cars, towels, pets etc.
~ Don't cut through your neighbors space. Don't walk next to their trailer or tent, stay on the road.
~ Most importantly - be friendly. You don't have to invite them to dinner but a smile and simple hello is a great thing.