Candler is where we actually stayed, about 10 minutes west of downtown Asheville. We arrived at the Hominy Valley RV Park on March 20, 2017. Home at last. 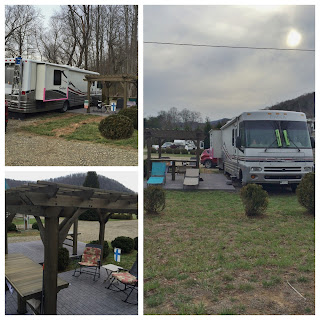 This is the same place we stayed last year. We were in the lower level right on the creek, with the exception of the last two nights when we were on the upper level on the road.

Sites are nice and wide in both places. There is a little road noise on the upper level but not bad. Both offer beautiful views. The WiFi is hit and miss, our Verizon signal was good. We paid $650.00 a month. 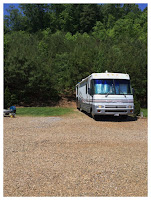 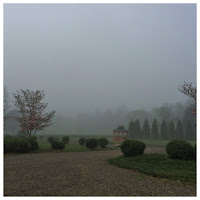 Even in the fog the surrounding mountains were pretty. We loved watching Spring take over the mountains and all of the trees come to life with buds and flowers. 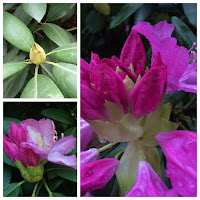 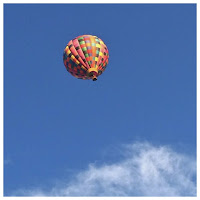 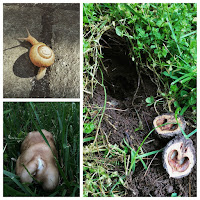 Nancy found lots of interesting things on her morning walks, snails, crazy mushrooms and the left overs of a squirrels breakfast. The valley is a popular place for balloons to pass over. 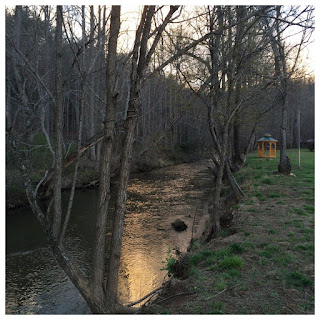 Fred has made some improvements.
He added covered patios to each site and gazebos to sit and relax while watching the creek or the mountains.


He now has two small houses that he rents out.They were quite busy while we were here. 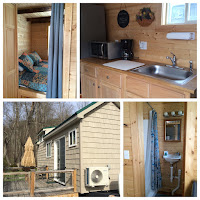 Two months flew by so fast, we didn't even make a dent in our to-do lists. The chore one or the fun one. The first week we rarely left the RV, we hit up the library and laid low being lazy and catching our breath and reading. We each got about 20 books read while we were here.
Nancy had 40 pages left to go in her last book the morning we left so she took pictures of the pages so the book could go back and she could still finish it.

We got all our doctor appointments taken care of and the license plates on both vehicles so we are street legal to hit the road again.
We did get a few things done. Les got caulking done on the outside as we discovered the passenger side window was leaking. Along with lots of purging and organizing.

Nancy painted the door panels on the fridge. She used a magnetic primer and then gloss black latex paint and we are pretty happy with the results. 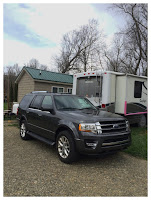 The repairs from our accident in Birmingham, AL took longer than expected but we had a nice rental vehicle so it was no problem. In fact the rental came in handy for taking stuff to storage and Goodwill to get it out of our RV! The repairs and rental costs were all covered by the other persons insurance - thank goodness! 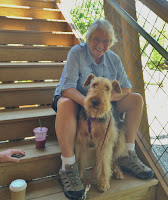 We shared a lot laughs with Janet over beer and coffee and spent a nice day at Carrier Park, which Mielikki was happy about.
Enjoyed a wonderful Easter dinner hosted by Judy and Billie. Janet shared her delicious mint juleps with us while eating the famous Guinnes Pie that Toni and Phillip made. 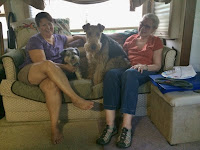 Helped Donna move and spent a relaxing evening with her and Gaia. 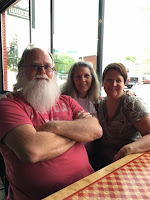 Munched on pizza while catching up with Sally and finally met face to face with Nancy's pen pal Barbara, who moved here last year from New York. 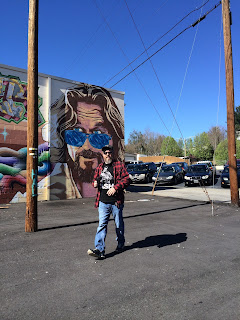 Family came to visit. First Lillian and Larry. It was so nice to meet Larry and get to show them our town. We had a blast exploring all the quirky shops and eating at Sunny Point and 12 Bones. Plus, we all got to relax in the Salt Cave. This is the only picture I got while they were here - Larry loved the mural on the bowling alley so we stopped so he could get a picture of it. 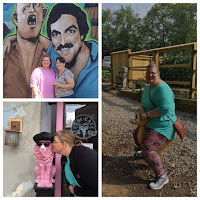 Sherrie also came for a visit, three wonderful days of Up-words, beer and food.
We explored downtown, hit up Burial Beer, Sunny Point and Blind Squirrel Brewery in Burnsville, cuz even a blind squirrel finds a nut every now and then! We tried to show her the beautiful views on the Blue Ridge Parkway but the fog was so thick we couldn't see a thing and we scared the crap out Sherrie in the process. 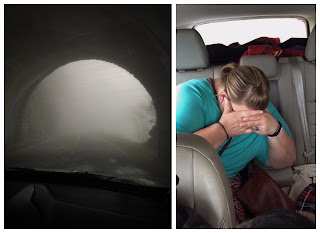 She didn't see much as her face was covered most of the time! But, she did help out Mielikki a few times. 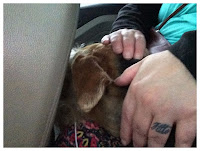 Made new friends as well. Todd and Kay are also full time RVer's and stayed a couple sites over from us. They are looking for a house here in Asheville so they should be around when we come back next spring. Todd is an amazing acoustic guitar musician and holds the title of National Finger Guitar Style Champion. Check out the link to his website - you won't be disappointed. Plus their dog Tucker, Mielikki's new best friend, does a pretty good job singing our theme song "Happy Trails to You".

Mielikki got a much needed haircut from our groomer here in town, actually she got two while we were here.
We hit up some of our favorite haunts, like Filo and checked out new ones. Penny Cup and Owl Bakery were two, there are just so many choices. 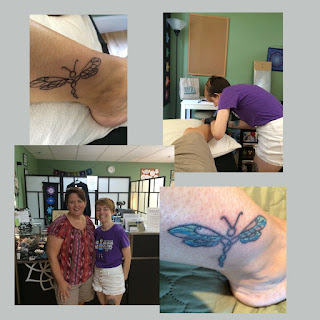 Nancy got herself an early 60th birthday gift. She has always wanted a tattoo but has never really been brave enough to do it - well this time she was. Mychela at Zen Ink did a fabulous job on her Celtic dragonfly. It was a little painful but not as bad as she was expecting.

Irish music at White Horse is always a favorite as is spending time in the River Arts District. Jonas Gerad is one of Nancy's favorite artists and we got to see one of his demonstrations.

There is never enough time to see it all or do it all but the open road is calling so off we go again.

Asheboro, NC is up next.

Tips and things we have learned along the way.
~ Verify your dates
We pulled into Asheville on March 20th and paid for two months, so in our thinking we had our site until May 20th. Well, that wasn't exactly correct because 60 days ended on May 19th. Fred had someone coming into our spot on that day. So we had to move the RV to another spot - up on the road. While this wasn't a total disaster, and thankfully there was another spot open, it was kind of a pain to have to move twice in two days!