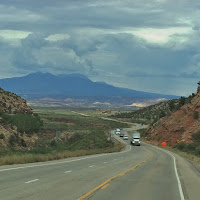 We made it to Utah on July 28, 2017. It was an uneventful drive to Moab. Of course it was filled with amazing scenery. 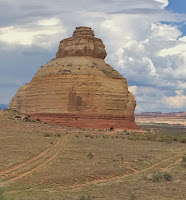 We never get tired of seeing the crazy rock formations and the changing terrain.


We stayed at the OK RV Park just south of Moab. The park has over 63 sites, a mix of RV and tents along with cabins. It is well kept up. 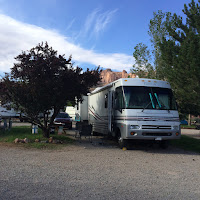 We were in Site 12 which is gravel with a nice patch of grass, a picnic table and full hookups. Plus a couple of trees. WiFi was good, laundry and bathrooms were very clean. We paid $27.18 a night with our Passport America discount.

There is so much to do in this area so our days were packed. First up we hiked to the Faux Falls at Ken's Lake. They are actual falls but were named this because they were created when water was diverted this way to reach Ken's Lake. 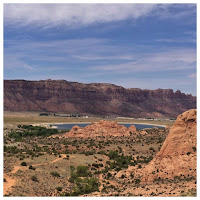 The hike was fairly easy, mostly along the river bed and in and out of shade with not to much change in elevation but enough to give you some nice views.
It was in the 90's so a bit hot and we welcomed any shade we came across. 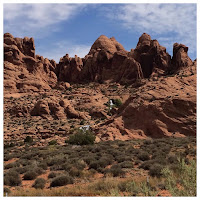 You can see the falls off in the distance as you hike towards them. You pass a number of small rapids in the creek and a smaller water fall. 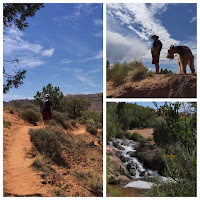 We found a few new friends along the way. Apparently someone had a little snack at the base of the small falls, or there are some clawed creatures in this creek. 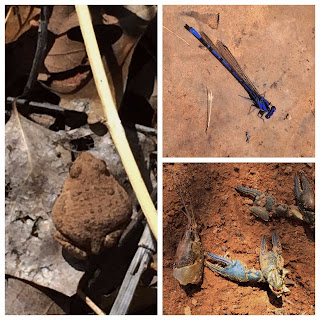 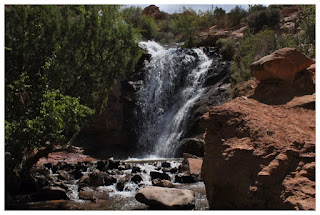 Nancy and Mielikki climbed to the top of the falls while Les waited for them at the bottom.

After the hike we went to Wilson's Arch. Of course Nancy was excited to come here! It is named after Joe Wilson, (no relation) a local pioneer who had a cabin close by.

The formation is Entrada Sandstone and over time the superficial cracks, joints and folds of the layers are saturated with water. Ice forms in the fissures then melts in the heat and winds clean out the loose particles. Nature is pretty cool. You can actually climb into the arch, but a storm was moving in pretty fast so we played it safe and took pictures from below. Once again the windswept rock is incredible. 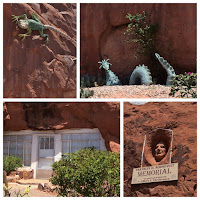 Just down the road is the Hole N the Rock. It is a unique spot. There are three gift shops and lots of artifacts and art sculptures on the grounds. 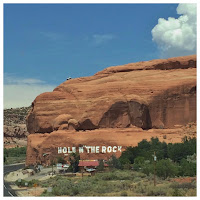 Originally it was the 5000 sq. foot home of Albert and Gladys Christensen. It started as a small alcove for the young Christensen boys to sleep in at night and grew into the engineering marvel that it is. It was a 20-year process. There is a fireplace with a 65-foot chimney and 14 rooms arranged around huge pillars. The original furnishings are still is place along with some of the tools used to create the home. Albert carved a sculpture of Franklin D. Roosevelt on the face of the rock. 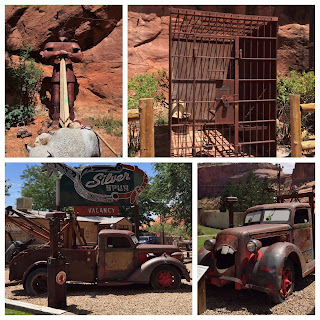 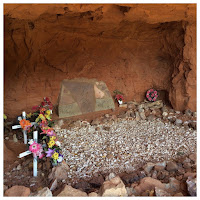 Albert passed away in 1957, before the project was completed. Gladys continued his dream and opened a gift shop and held tours until she passed in 1974. Both are laid to rest in a small alcove next to the home. 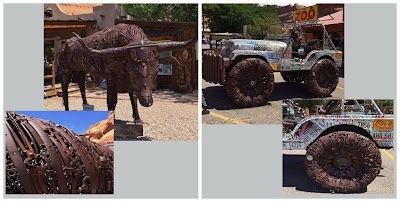 We found a few Roadside Oddities in the area. The Movie Museum being one of them. It is housed in the Red Cliffs Lodge which is on the Scenic Byway 128.
Many movies were filmed in this area. Some include Rio Grande, Thelma and Louise, The Lone Ranger (2013), MI-2, Back to the Future II and III plus many commercials and fashion shoots.


The walls of the museum are lined with posters and memorabilia from the movies and there is a short film you can watch.

Newspaper Rock was fascinating. We have been to others but most of them are pretty far off in the distance. You are standing right next to this one so you get to see the petroglyphs very well. The etchings in this sandstone span history back 2,000 years. It is believed that the Archaic, Basketmaker, Fremont and Pueblos cultures have contributed to the rock face. 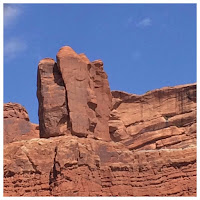 Arches National Park is just minutes north of downtown Moab. We were in awe from the moment we pulled up to the entrance gate. There is a face watching over the visitor center. It was once again in the high 90's and you cannot take dogs on any of the trails so luckily the views from the overlooks were more than adequate. Nancy did venture out on a few of the trails for some extra pictures.
Park Avenue like the name suggests has many high rises along with a few balancing rocks. These "skyscrapers" tell the story of the Entrada Sandstone.
The sandstone began forming more than 150 million years ago as tidal flats, desert, and beach deposits. Over time layers of rock, some a mile thick or more covered these deposits. Pressure from these rock layers compressed the buried sand into sandstone and cracked it. Erosion then did its work removing the overlying rock layers. The erosion has left what we see today. The erosion is still constantly happening so over time this landscape will change.

The Organ, Courthouse, Three Gossips and the Sheep Rock were entertaining. The sheep rock was once connected by an arch that has fallen.

Just driving down the road gives you so much to look at. As always we saw images in the rocks. A face profile, two love birds and a castle to name a few. The changes in color was always a surprise. 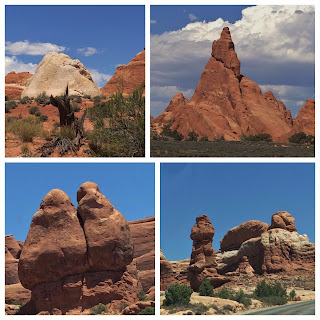 We are not the only ones who see things as many of the formations are named. Along with the ones previously mentioned, Parade of Elephants is another.
The change in terrain through out the park was pretty interesting. You go from all red rock, to the petrified dunes to an open valley full of sage brush.

Balanced Rock is just a short walk from the parking lot on a paved walkway. The rock looks different depending on what direction you are looking from. 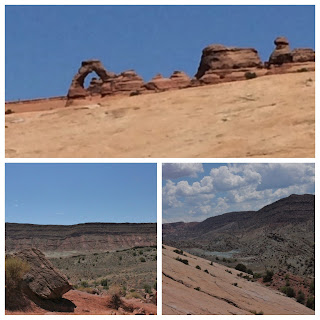 The hike to the high look out at Delicate Arch was very rocky and a bit of a climb. If Nancy had known that the view wasn't much different than that from the lower view point she wouldn't have hiked it. The lower view point is handicap accessible and only a short distance from the parking lot. One bonus of the high view was the surrounding area.

The overlook at Fiery Furnace is a short walk from the parking area but gravel and a little rocky. The view over the valley was nice. 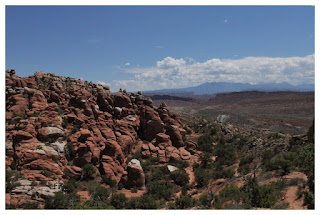 The name suggests that this was created from some sort of volcanic action, or that there is a source of heat here, that is not the case. The name comes from the glow the rocks take on in the late afternoon sun. The "fins" have been created by erosion. 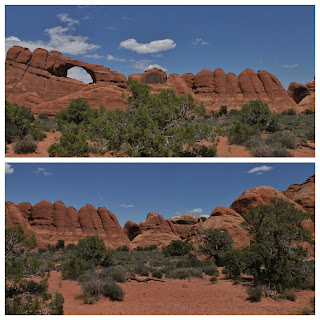 Skyline Arch was so pretty. You get a beautiful view of it from the road or you can walk in a ways for a closer look. The trail is rocky and a little steep in places.


Unfortunately the road to The Windows Section was closed for repairs - so guess we will have to come back to see those.

Dead Horse State Park is on the way to Canyonland National Park. We had actually planned to hike here, but discovered that you can see the canyon without hiking. The main road through takes you to the Dead Horse Point Overlook where you are treated to a beautiful view of the Colorado River. 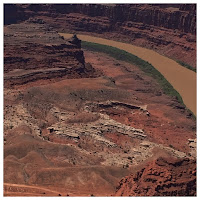 According to legend the point was once used as a corral for wild mustangs roaming the mesa. During the 1800's, cowboys would round up the horses and herd them across a narrow piece of land onto the point. They would fence them in with branches and brush creating a natural corral. Then they chose the ones they wanted and for some ridiculous reason leave the rest corralled on the waterless point. They of course died of thirst within view of the river. Hence the name of the park. There is a section of rock that looks like a dead horse, which of course helps the legend along.

Canyonlands National Park was way more than we expected. In fact we hadn't planned on going to the park, but when we didn't hike at Dead Horse we had extra time. We are glad we did. While standing on any of the overlooks you still can't grasp the enormity of the canyons.
Our first stop was at Shafer Canyon which gives you a good view of the White Rim Road. It is a 100-mile road that takes you across the canyons.

Only high clearance, four wheel vehicles or bikes are allowed. It generally takes two to three days by motor vehicle and three to five days by bike. There are ten camping areas along the route. Just looking at the road from the overlook was enough for Nancy. 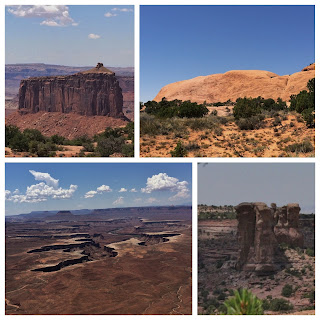 The rock formation in Holeman Spring Canyon looks like a large temple and we thought Whale Rock was a hoot.
The Green River Overlook gave us the first view of the mighty canyons. Yes, there is a river down there! The Candlestick Towers did look like fancy candlesticks! 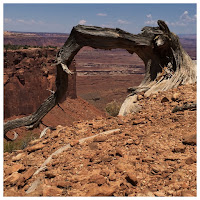 At the Buck Canyon Overlook you could see for miles with the gaping canyon running down the center of the valley. 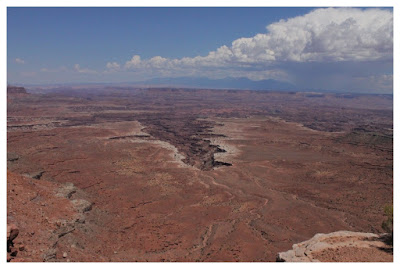 As the name suggests the view from Grand View Point was grand. The canyon is filled with needle towers and the landscape surrounding it is a mix a flat and rolling hills. 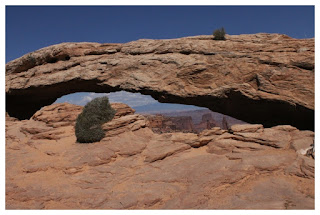 The hike to the Mesa Arch was a little rocky going in and rather steep on the way out. The arch itself is wonderful and being able to view the towers through it was awesome. Add the beauty of the surrounding view and it makes every step to get here worth it.

What a busy week this was and we still didn't see everything!

Up next is a short stay in Salina and then Long Valley Junction where we will visit Bryce Canyon and Zion National Park plus more.

Tips and things we have learned along the way
~ A tisket and tasket we use a lot of baskets
Living in a small space with little storage requires you to create your own extra storage space. Baskets is one of the ways we do that. 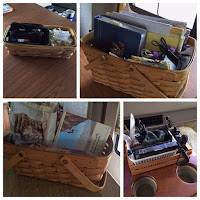 Nancy has always used baskets and has quite the collection from Longaberger along with plastic ones. We store books, kitchen items, dog essentials and toys, food, medicine, toiletries, art supplies, liquor and more.
It helps to keep everything in place, keeps things tidy and makes moving every week that much easier. Plus they look nice too. 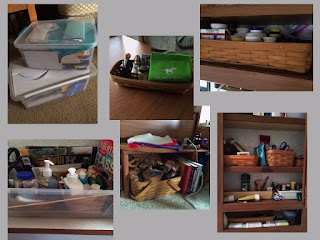