North Carolina ~ Asheville and the two stops on the way.

Oh how we hate to leave Michigan. Only cried a few tears this time. We did a one night stop in Fletcher, OH. on November 2, 2018. Our stop at Poor Farmers RV Sales and Campground was interesting. There had been rain for days on end and the campground was a little soggy. We had planned to stay in a pull through site so we didn't have to remove the car and dolly for just a one night stop.
All of the pull through sites were under water. So, the owner led us to a back in site that had empty sites next to it so we could drive through one of those and pull into the site from the back. Great idea, until we hit a muddy spot and our tires sunk! Luckily it is a working farm and they have a large tractor that was able to pull us out.
Our site had full hook ups, we only used the electric seeing it was a one night stop. The campground is well maintained, quiet and the staff was very friendly and helpful. We paid $28.00 a night with no discount. 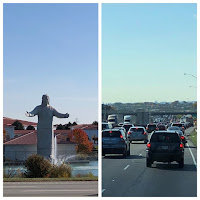 On November 3, 2018 we headed farther south, our drive through Cinnci was the same as always - backed up traffic! What isn't the same is Jesus - sure do miss "Touchdown" Jesus!
Our stop at the Creekside RV Park on the grounds of the Renfro Valley Entertainment Center in Mt. Vernon, KY was for two nights. It is a large complex with music entertainment and shops. The campground is well maintained with mostly pull through sites. 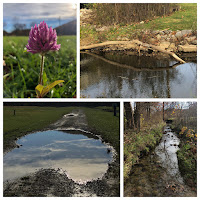 We had full hook ups and the site was plenty long enough for our RV and tow dolly. The park offered lots of places for dog walking and picture taking. We paid $31.12 a night with our Passport America discount, they also honor Good Sam. 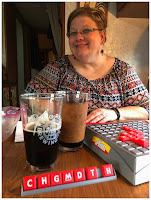 A bonus of this stop is that our niece Sherrie from Louisville came and spent the night with us. Eric and Lilly both had to work. Whenever Sherrie and Nancy are together you know the Upwords Game is out and ready to play. 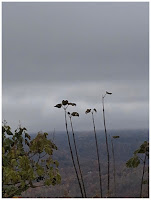 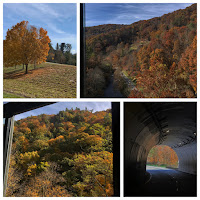 On November 5, 2018 we headed home! Our drive through the mountains offered some fall color and a little bit of fog.

Unfortunately, this wasn't a very long stay, but anytime in Asheville is good. This trip was planned all around doctor appointments. Les needed to come back for his one year check up with his cardiologist at the VA. Thankfully he got the all clear, hard to believe it's been a year since he had his heart attack and stint put in. Nancy caught up on some of her appointments as well that she couldn't get done during our spring visit. We are all set on health issues and ready to hit the road again. Okay, Nancy would never leave Asheville, but the road is calling. 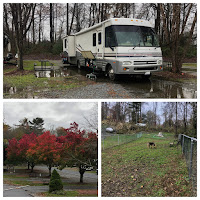 We stayed at the Lakewood RV Resort in Flat Rock, NC, about 45 minutes south of downtown Asheville. It was still "leaf" season so finding a campground with an opening was tough.
It is a very well maintained park, about half of it is permanent residents, many of them in tiny houses. There is a dog park, clubhouse and lots of planned activities. We were in Site 316, a gravel pull through with full hook-ups. Just long enough for our RV, tow-dolly and parking the car. We paid $44.00 a night with our Good Sam discount.

Once again Nancy dropped the ball on taking pictures! 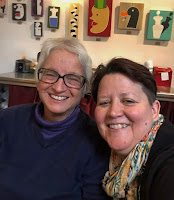 While we didn't get to see everybody we did see a few friends. Dinner with Sally at Les's favorite Mexican restaurant. Coffee with Donna at Fractals Coffee Shop.
Of course we hung out with Janet, but surprisingly never at a brewery! But we did enjoy some meals and coffee and the only person we got a picture of!

We also toured the Carl Sandburg Home in Flat Rock with her.
The house was built around 1838 by Christopher Memminger, who was Secretary of the Confederate Treasury from 1861-1864. The second owner was textile tycoon Ellison Smyth who named it Connemara to honor his Irish ancestry.
The Sandburg's moved here in 1945. Carl was looking for a secluded place to write and wife Lillian and their daughter Helga were looking for a place to raise their goats. They moved here from Michigan with their 3 daughters, two grandchildren, a library of over 14,000 volumes and a herd of goats.

The house is currently being renovated in places so a number of books and other personal items were boxed up. The process for this was quite extensive, with pictures taken of each shelf and extremely detailed notes so that everything will be put back exactly like it was. 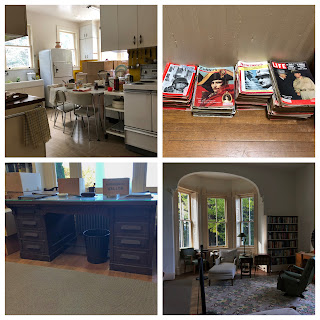 The upper left picture is the kitchen where many items were made from goats milk. The volume of magazines from when they lived here was impressive. The wooden desk was made from beams that were in the White House when Lincoln was President. Sandburg wrote a biography of Lincoln and when renovations were made to the White House, the contractor had the desk made for Sandburg. The bay window is in Lillian's bedroom.


Lillian was internationally renowned as a goat breeder. Her and Helga raised and breed champion dairy goats. During the years of 1946-1952 their herd numbered over 200 animals.

The left hand picture is the Tenant House built in 1910 for farm assistants. During Sandburg's time is was occasionally used for farm employees or as a painting studio for Helga. Center is the Swedish House. Carl called it the "Swedish House" because of the scalloped accents and used it as an overflow library for magazines and books. Right hand picture is the Wash House/Chicken House. Built in the 1840's, Memminger used it as slave quarters during his summer visits here. In 1924 Smyth installed large tubs and it was used as the Wash House. Lillian used it first for chickens and then for young goats. 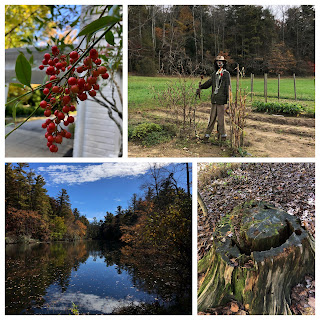 Carl Sandburg was born January 6, 1878 in Galesburg, IL. He passed away here in Flat Rock at the age of 89 on July 22, 1967. He spent his lifetime championing social justice through his writings and singing.  His wife Lillian was born in Hancock, MI on May 1, 1883. She passed away on February 18, 1977 at the age of 93 in Asheville, NC where she lived after the property was sold and the house and it's contents were donated to the National Park Service. In 1968 the home became the first National Historic Site honoring a poet. 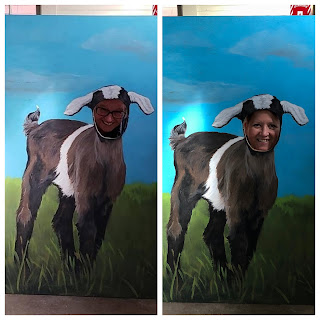 While the goat farm is not nearly as active as it was in its heyday there are still a number of goats on site and you can go into their pen as they are very gentle.
Nancy and Janet had great fun making friends with them and playing in the barn. 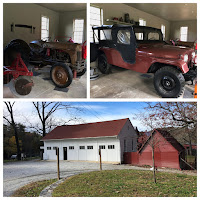 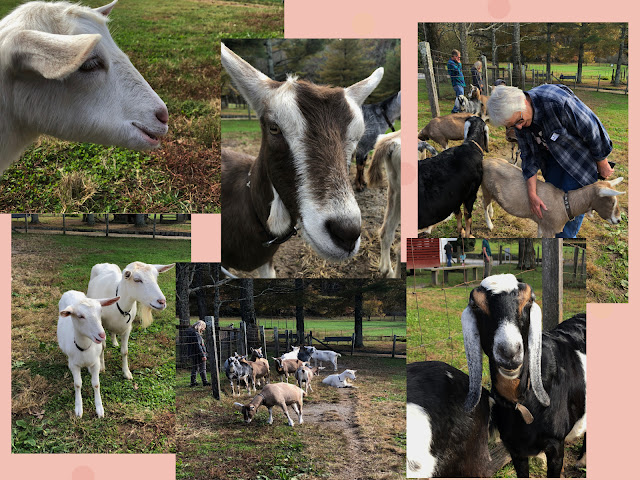 Up next is Foley, Al, where we stayed for a month.

Tips and things we have learned along the way.
~ Mold
We have talked about mold issues before, it is a common occurrence in RV's. The weather has been damp and rainy since we were in Michigan so we should have been a little more diligent in watching for it. But, of course we weren't so it wasn't really a big surprise to find it in our cupboards and on some of the windows. So, once again we have a really clean RV top to bottom. 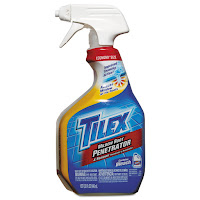 Here's what we did:
1 - We removed everything from the cupboards and drawers, and pulled the drawers out.
2 - The insides of the cupboards and the drawers inside and out were cleaned with a mold retardant cleaner. We use Tilex Root Penetrator and Remover. There are other brands. It is strong so make sure the area is well ventilated. We cleaned the walls behind all of the drawers as well.
3.- We left the drawers out to dry completely and then we sealed them inside and out with varnish. This way if we get mold again it will not be able to get into the wood.
4. We placed a small fan in each cupboard to dry it completely and for a couple of days we removed the items from the cupboard so it could continue to air out.
5. It is best to not have the cupboards filled tightly, you want some air to be able to circulate. We store most everything in zippered plastic bags, this not only keeps things from getting moldy it helps with dust too.

The most important thing to remember is to check often. If it has been really damp, we suggest checking at least once a week. Better to catch it right away then to let it get bad. Hopefully we can remember to do this!