Still so much to share - so once again hang in there till the end. 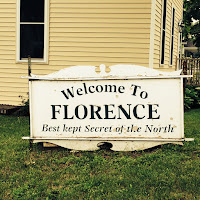 We are only a few miles from the Wisconsin boarder and discovered a town there called Florence, which was Nancy's moms name. So of course we had to go. We were very surprised at how big it is, we expected it to be just a small town like others we had drove through. We found a small local paper called the Florence Mining News which excited Nancy and she had to buy a copy for herself and her siblings.

We ran through Florence on our way to Ontonagon, which is on Lake Michigan and is just outside of the Porcupine Mountains State Park.
On the way we found some interesting things in Rockland so of course we stopped for pictures. As we entered the town there was an old man sitting in a lawn chair on the side of the road just waving to everyone as they went by - we nick named him the Ole Yooper.


A really cool old church that is for sale. Nancy would buy it if it was in a warmer place! 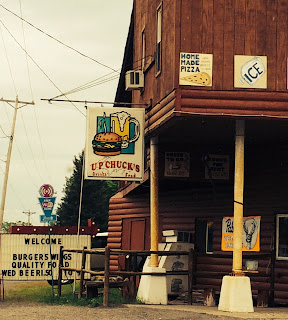 UP Chucks Bar - thought of our nephew Chuck - not sure if UP is for Upper Peninsular or if they really mean UP Chuck! 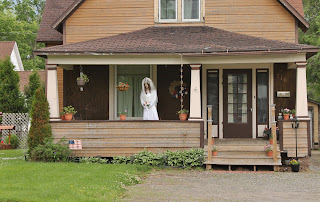 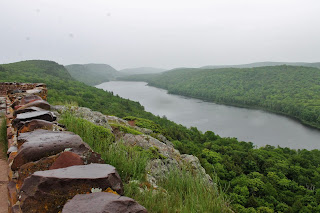 We went to the Lake of the Clouds, in the Porcupine Mountains State Park. You drive rather high up in the mountains to get to it. It was raining the day we went but it stopped enough for us to get out and get some pictures. You can see why it is called Lake of Clouds, the mist from the rain was just coming over the lake. 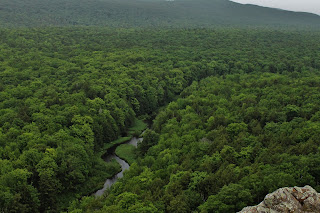 The view is amazing. It is a short walk from the parking lot to the overlooks, and also handicap accessible.
It is a beautiful spot and we can only imagine what it looks like in the fall with all the colors.
The park offers a number of trails to hike, from easy to difficult. 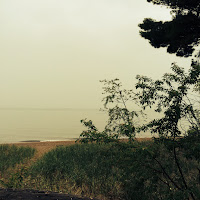 We stopped at the Ontonagon Township Park, where we had a great view for our picnic dinner, which we ate in the car due to the rain. It was also a little foggy that day. 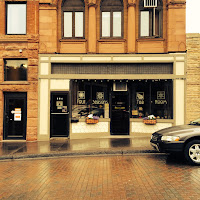 From there we ran back up to Houghton, in hopes of visiting the Four Seasons Tea Room, which is owned by a family from the grade school that Katrina went to. We got there a little late for tea as they were closed already, so we went for beer instead.
We went to 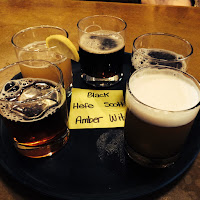 the Keweenaw Brewing Co. and enjoyed a flight and a pint of great bear. Even Les liked all of their beer, which is amazing. The brewery is in a cool old building, with barn wood walls, and old wooden floors, the bar tops are of course made out of copper. 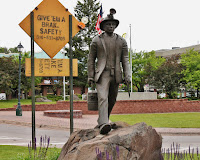 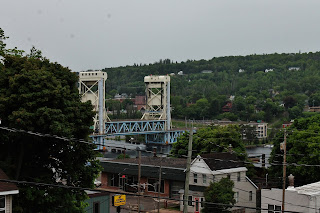 Copper miner statue in Houghton.  Thought the "Give 'em a Break" sign behind him was appropriate. 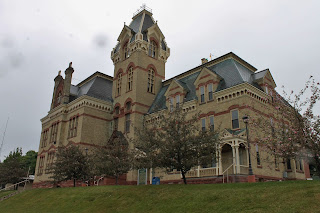 While taking a picture of the beautiful Houghton County Courthouse we had a great view of the The Lift Bridge as well.


One day was spent going to Ironwood where we found a ton of roadside oddities there, and along the way - we are having so much fun finding these. The Road Side America website is our go to site.

The red Stormy Kromer cap has been a fashion badge in Michigan's U.P. for over a century. It looks like a red baseball cap, but has been modified to be rugged, warm, and to not blow off in the U.P. wind. 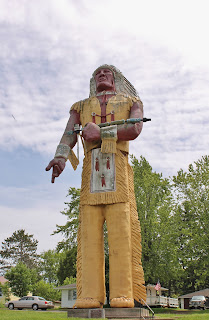 Smiley Face water tower in Ironwood - there are a lot of these across the country.

The largest Indian, in Ironwood. Hiawatha was built in Minneapolis in 1964, transported to Ironwood and erected in the "caves area," on the site of the Old Norrie Iron Mine. Hiawatha rises into the "giant" category at 52 feet (though his base may account for 2 of those feet). He weighs 16,000 pounds, including anchoring internal steelwork, and is engineered to withstand 140 mph winds. 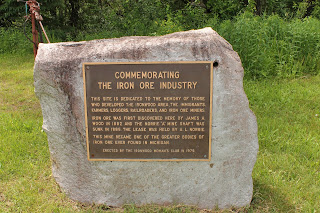 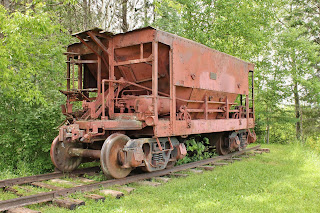 On this same site is a memorial
of the Iron Ore Industry.

In downtown Ironwood there is an incredible mural painted on the side of a building to honor miners.

They have also turned an old depot station into an historical building honoring the miners and their history.

The Nee-gaw-nee-gaw-bow statue is in Wakefield.

Peter "Wolf" Toth carved this statue of a Chippewa Indian in 1988, from a single piece of pine donated by the Ottawa National Forest. Nee-gaw-nee-gaw-bow means "Leading Man" in Chippewa. This was the 59th statue on Toth's "Trail of Whispering Giants," his project to create an Indian sculpture for all 50 states, which he did from 1971 to 1988. You can see all of his carvings and read more about Peter "Wolf" Toth on his website.

We never know what we will discover when driving along. Many times we come across things we never planned to see. Mt. Zion Overlook was one of these. It is ski lodge that you can go to and see quite the view. 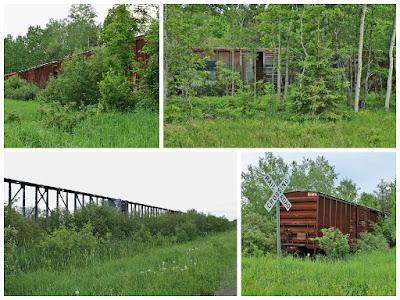 Abandoned trains are another. They start in Covenington and run for about 9 miles. The railroad company says they are being stored but locals say it appears they have been forgotten, because they have sat there for so long. 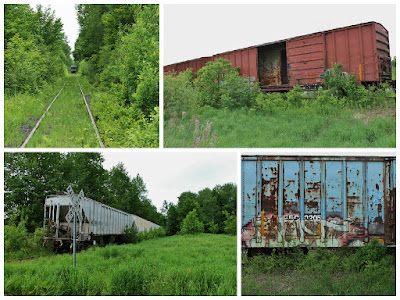 What struck us was the lack of graffiti. There were only 2 or 3 cars that were hit with graffiti and it seems that was done before they were left here.

Waterfalls are always something we search out. We found four in the Ottawa National Forest, two of which were roadside ones. Potawatomi and Gorge Falls are on the same trial, with Gorge Falls just a short distance north of the Potawatomi. The viewing platform at the Gorge end is handicap accessible, the other trail has a ton of stairs. These two falls where amazing. It looks like root beer coming over the falls, the river they are on is called Black River and we can see why! 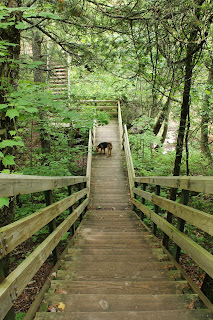 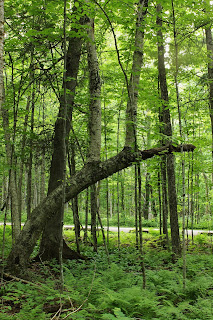 Lots of stairs to climb, we always find them.

This bent tree has two trees growing out of it - Mother Nature never ceases to amaze.


Root Beer falls was roadside but you have to climb down a short embankment to get to it. It wasn't easy to find either. It is appropriately named and a beautiful little spot. 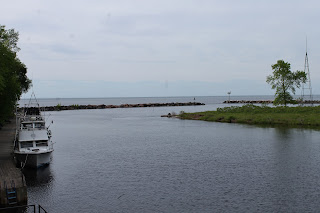 While enjoying the falls we came across Black River Harbor, that opens to Lake Michigan. There is a nice park along side the harbor, with picnic tables and hiking paths, as well as an old boat on display titled Nancy Jean. 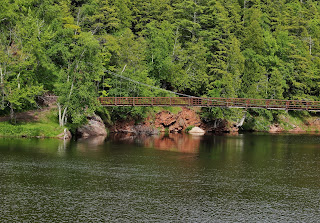 There is a lot to do right in Iron Mountain and neighboring Norway. There is a bat viewing place, it has a grated opening to an old iron mine shaft and during certain times of the year you can see hundreds of bats coming out at night. Unfortunately this wasn't the right time of year, would have loved to see that. 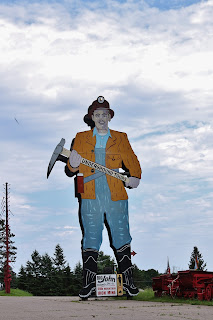 There is the Iron Mountain Iron Mine that gives underground mine tours, where you travel 2,600 feet through drifts and tunnels to 400 feet below the earths surface, and it is the home to Big John, who stands 40 feet tall and weighs 1 ton. 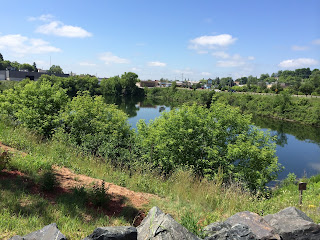 There are hiking trails along a lake formed from the mining. 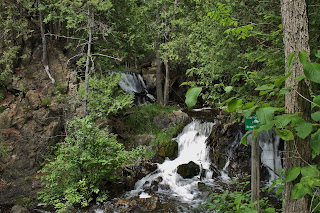 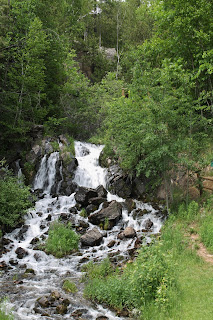 Roadside Fumee Falls is truly road side and can be viewed from your car, or the small bridge over the river. There is a short set of stairs that take you to the upper two falls. 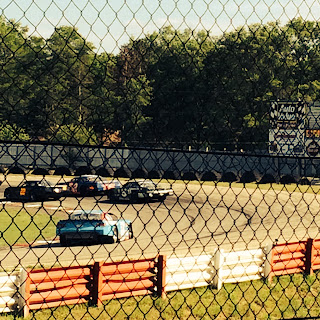 Norway Stock Car Races were a lot of fun. There were 5 different types of cars racing. While we were sitting in the stands waiting for the race to start the announcer says over the loud speaker that the drivers will meet at 6:45. We look at each other in confussion because according to the time on our phones it is 7:15. It was then that we realized that we had been here for 3 days and living on the wrong time! Iron Mountain is in Central Time not EST. It made sense at that moment why no one was around when we arrived at what we thought was 5:00 and was really 4:00. Apparently time really has no meaning for us!


We tried 4 different places for pasties and the best ones we had were in Iron Mountain at Dobber's Pasties. We bought a half dozen frozen ones to take with us. They re-heated really well, the crust stayed nice and flaky. They do ship them so if you have a hankering for a pasty check out their website.


In previous posts we shared the problems we have had with one of our hydraulic lift jacks. When we left Newberry we didn't have any problems at all and were quite happy. Pulling out of Iron Mountain wasn't as smooth, and the problem jack would go up again. We tried everything and nothing was working. Jerry, the owner brought out the big guns with a huge metal bar that did the trick in pushing it up.


One more opps before we were done traveling. Les's allergies have been terrible while here in the U.P. Well, as we were driving down the road he had a sneezing fit and missed our turn! The next main road was miles north, so Google maps to the rescue. Nancy found a side road that took us in a large square down three side roads and back to the highway we were on, because you can't turn this rig around just anywhere. The road wasn't much wider than our RV but it worked.

Thanks for following along with us.

Happy trails to you.

Tips and things we have learned along the way
~When replacing a shower head (ours stopped working) be very careful of the direction you have the pipe facing. Les went to show me the water spray coming out of the pipe and had it too high and sprayed the entire wall. Once that was cleaned up he tried to show me again and sprayed himself in the face. We laughed so hard we could hardly stand up. Needless to say I never saw the water spray! But we have a nice handheld shower head now.
~Make sure your electrical cord and water hoses are long enough for any camp site. This site the sewer hook up was on the correct side but we had to run our electrical cord and hose under the RV and across our site. We had to position the RV just right so our cord was long enough.