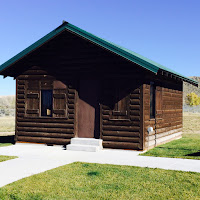 The drive to Rexburg, ID was a five hour trip. We stopped at the Lima, MT rest area to stretch our legs a bit. They have a small log cabin on display that is a monument to a program that was started in the mid '30's to promote Montana's scenic and historic treasures. College students, dressed in western style shirts, cowboy boots and bandannas welcomed visitors and handed out information. This cabin, built in 1936 sat on Old US Hwy 91 in Lima. It was used for almost 20 years. The cabins were phased out in the early '50's. 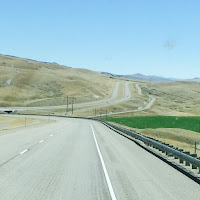 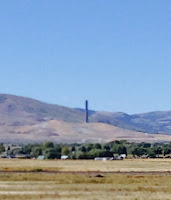 While most of the drive was tedious and at times the view a little desolate looking, we did see some interesting things along the way. Snow capped mountains off in the distance and a very tall chimney. It is a Smelter Stack in Anaconda, MT. Standing at 585 feet you can see it from a long ways away. It is 75 feet in diameter at the base and 6 feet thick. 60 feet in diameter at the top and 2 feet thick. It was built in 1919 and is the worlds tallest free standing masonry structure. It is so tall the Washington Monument would fit inside of it. 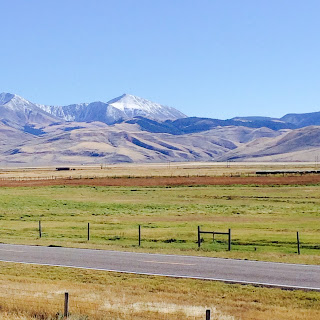 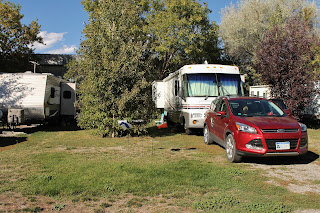 As we approached Thompson's RV Park, we were wondering what we had gotten ourselves into. Just outside the gates is a potato packing plant, an abandoned grain mill, and a run down store. Going through the gate was like entering another world. The park is well maintained, and Connie met us in the driveway to welcome us. The sites are about average size with shade trees on both sides, the bathrooms and laundry room were very clean. The park backs up to a farm field, so nice open views. The down side was the Wi-Fi was not good at all.

Rexburg is a fairly good sized town, it is home to the Idaho Brigham Young University campus. It was interesting driving through campus and seeing signs for "approved" female or male housing, not something you see at most universities. There is a large Later Day Saints Temple in Rexburg and Idaho Falls. Both look all most exactly the same. 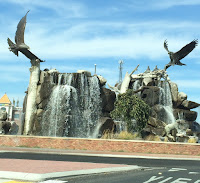 Idaho Falls is about 30 minutes south of Rexburg and a much bigger town. Big city shopping is done here. We loved the roundabouts, they have fountains, gardens, or mosaic designs in the centers of each one.
It is also home to Idaho's Peter Toth Indian. 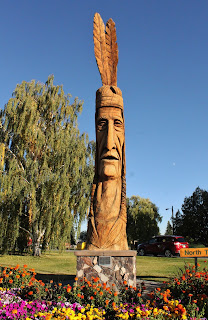 It's the 37th one and was built in
1980 out of Douglas Fir. He stands 27 feet tall and sits in a beautiful garden.


Craters of the Moon National Park is appropriately name. It reminded us of when we landed in Hawaii and thought we were on the moon. The trip there takes you through very flat prairie lands and then, here and there you see a dark rock or two in the fields, then a few more and then whole fields full of them. 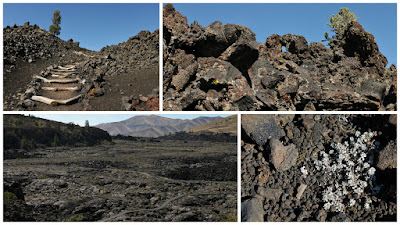 The North Crater Flow is crater fragments that rafted here on lava flows and our first spotting of Dwarfs Buckwheat. 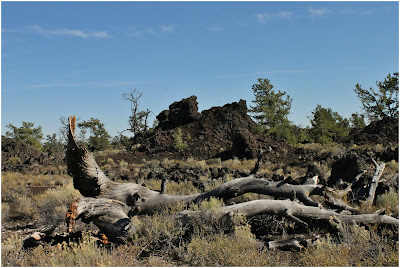 Devil's Orchard is where island-like lava fragments stand in a sea of cinders.

The Inferno Cone is one of the world's largest basaltic cinder cone. To get to the top you climb a short but very steep .4 mile trial. The views are worth the effort. You are towering about the lava plains and can see additional cones and in the distance the Great Rift and Big Cinder Butte. 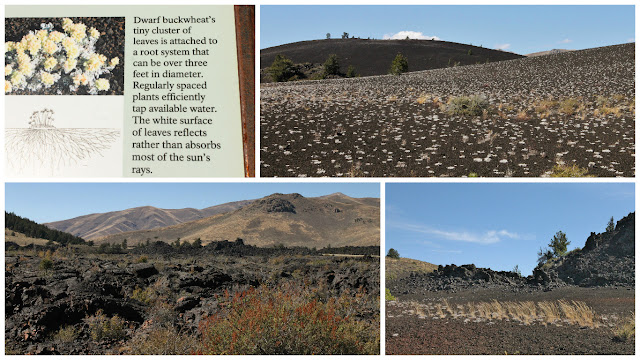 The plant life we kept seeing amazed us. How anything can grow here is mind boggling. The Dwarf Buckwheat was the most interesting. It grows with such regular spacing that it looks like it has been planted. The spacing occurs because the plants compete for water through their extensive root system.


The Spatter Cones and Snow Cones are miniature volcanoes. Both are wheelchair-accessible.

There were so many different shapes. One is lava tubes, where the outside hardens and lava flows within. In some places you can see where the lava flowed over itself.


The park is a vast and almost eerie place to visit. Most stops can be seen from the car or overlook without walking far, there is a brochure that you use for a self guided tour. There is a lot of history here. It became a National Monument in 1924. Archaeological evidence and oral traditions indicate that the Shoshone likely witnessed volcanic eruptions here. NASA's Apollo astronauts learned basic volcanic geology here in 1969. Definitely a place to explore, there are a number of trails and a few caves that you can hike to, no pets allowed so leave them behind if you plan to hike.

The north end of the Grand Tetons was done from Cody, WY and the south end from Rexburg, ID. The Cody, WY visit was a rainy and foggy day, with some occasional glimpses of the sun.


Willow Flats Overlook with the Moran Canyon in the background, is a popular hangout for Moose - but not today.


The road up to the Signal Mountain overlook is steep and twisty and even a little narrow in spots, but the views are worth it. 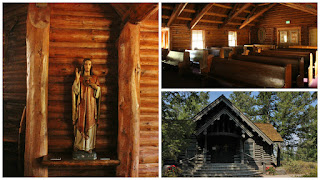 The Chapel of the Sacred Heart is on a rise over Jackson Lake. They hold services there on Sundays and it is open all the time. A beautiful log chapel. The views were very pretty and Mielikki loved running on the rocky beach. 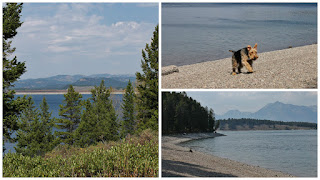 Jenny Lake Overlook offers some of the best views. We were so glad that our second visit here was a much clearer day. 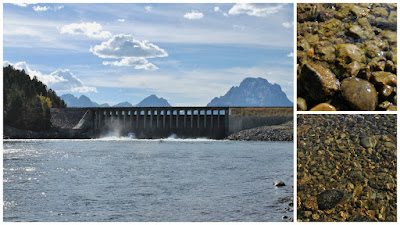 Jackson Dam is about mid way in the park. There is a large rocky beach that offers a great place to fish. The water is so clear that once again it is deceiving how deep it is. The water was about a foot deep in the pictures of the rocks. 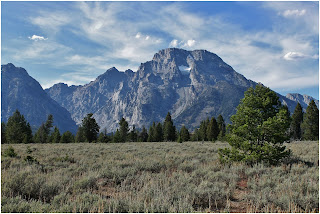 Mount Moran was one of our favorites. 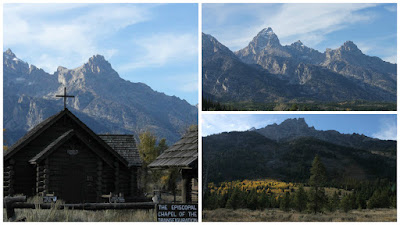 There is an Episcopal chapel at the south end. We didn't explore inside as it was getting late in the day. What an incredible place to worship.

There are a number of side roads to take and we suggest you do as many as possible. You will find great views of the Snake River, lots of plant life and even some wildlife 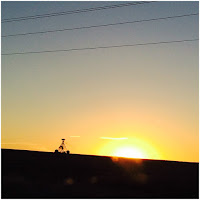 The day ended with a beautiful sunset on the way home.

Home repairs are inevitable whether your home stays in one place or moves across the country. As always a little preventive care goes along way. One of our kitchen drawers had been sticking and was difficult to open, we should have checked it sooner but didn't and one morning while trying to force it open the front panel came right off. Once we got the drawer out we discovered that the track was broken and upon further investigation we found four other broken tracks - no wonder the drawers were sticking! A hunt for replacement parts ensued, not an easy task for a 15 year old RV. We thought we had found the right brackets but when we tried to use them they wouldn't work - so back to the cabinet shop, KVO in Idaho Falls was very helpful. We ended up with all new brackets and tracks. Drawers work like a charm now and all have been re-glued so they are nice and sturdy as well.

Western Idaho is the next stop on the Barrett trail.

Tips and things we have learned along way.
~ Small change adds up. Like everyone else we are on a tight budget so we pick and choose what events we go to based on cost. We pay for most everything with cash which means we get a lot of loose change back. We save all of that change in a large glass bottle and when it's full we roll it up and take it to a bank to exchange for cash. We usually end up with about $20 - 25 and treat ourselves to breakfast or lunch out, a brewery if we can find one, or entrance into an exhibit.
We have found that the small local banks are the best for exchanging coins for dollars. Wells Fargo charges 10% to exchange your coins, which is ridiculous, and the coin machines in stores also charge a percentage anywhere from 6-10%.