It took us six months but we finally made it to Oregon on October 4th. While we saw some pretty amazing things in Idaho for the most part it is flat and dull brown with lots of sagebrush that sent our allergies into overdrive. 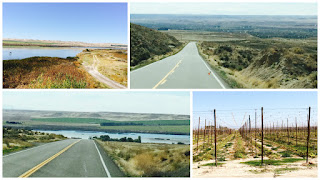 As usual we took mostly back roads to Vale, OR there were a few hills and valleys and we crossed the Snake River a number of times. We did see acres and acres of hops on the western side of Idaho, it is the nations third largest producer of hops. 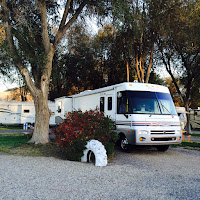 Vale is a small town with not much to offer, but we only stayed two nights, enough time to get pictures of the murals that are painted around town depicting the history of the Oregon Trail, and a trip back to Boise to enjoy a few breweries.

We stayed at the Vale RV Park, just on the edge of town. A small park with about 30 sites. It sits right next to the railroad tracks but they are not very active, so it wasn't a problem. On the other side of the tracks is a stockyard for cattle auctions. Nothing was happening there until our last day, when an auction was held all day, from 9am to 9:30pm. Lots of noise from the loudspeakers, at times it was pretty entertaining listening to them. The cows that were not loaded onto trucks were quite vocal late into the night, or early into the morning if you will. The park is well maintained, the sites about average size with nice shade trees. 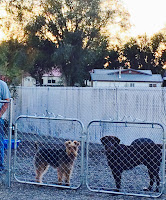 We were greeted by Denny, who was super friendly and helpful. His trailer was just across from ours and he has a very friendly lab who became fast friends with Mielikki. There is a small pet area for the dogs to play in, which is such a great idea, Mielikki loved it.

There are 29 murals all painted by local artists that cover the entire town of Vale. There is a map with all of the mural locations marked on it, so with map in hand, or in pocket, we dusted off our bikes and hit the mural trail. It was fun finding them all and getting pictures. Left to right - "First Set of Shoes" (1997) Gary Kerby - A blacksmith across from the Rinehart Stone House. "The Hot Springs" (1995) Ruth Boyle, Neo Brown, Carol Hayes - The joy of a bath in the hot springs of Malheur River. "Sunday Go To Meetin" (2004) Colleen Mitchell-Veyna - The Vale Christian Church built of native stone and dedicated in 1911. 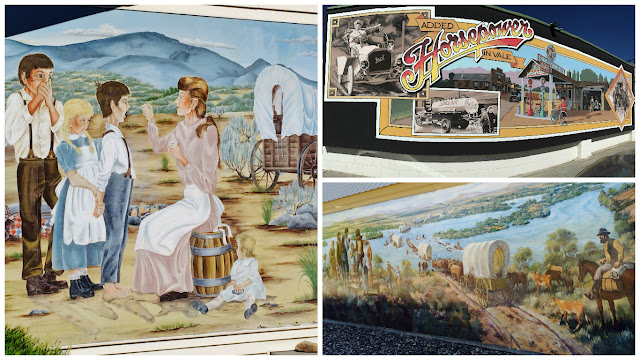 Left -"Caster Oil, The Cure All" (1998) Beth Wolfe - A mother gives a dose of preventive medicine to her unenthusiastic children. Right top - "Added Horsepower" (2010) Art Mortimer - The transition from horse and buggy to the automobile. Bottom - "The Crossing" (1994) Robert Thomas - Crossing the treacherous Snake River. 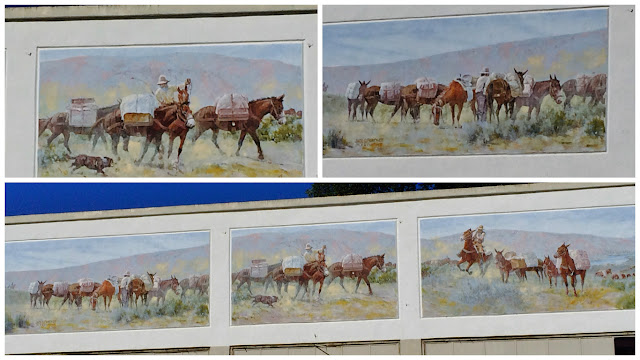 "Men, Mules and Merchandise" (1999) Jack Fordyce - A mule train delivers supplies from Burns to Vale in the late 1800's. 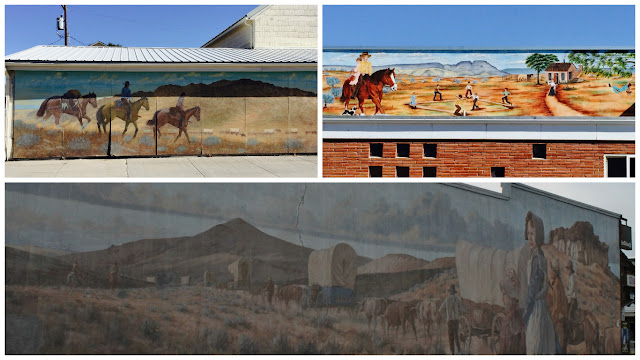 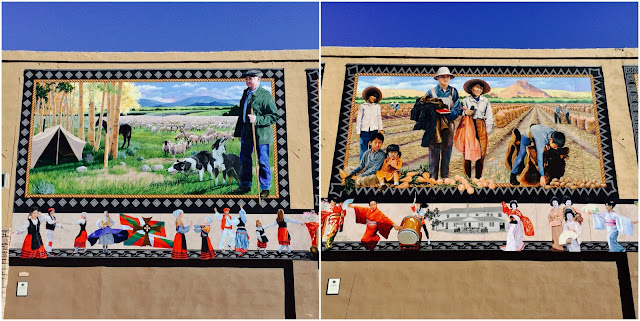 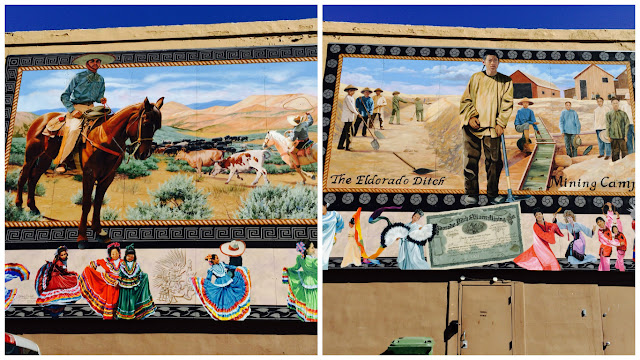 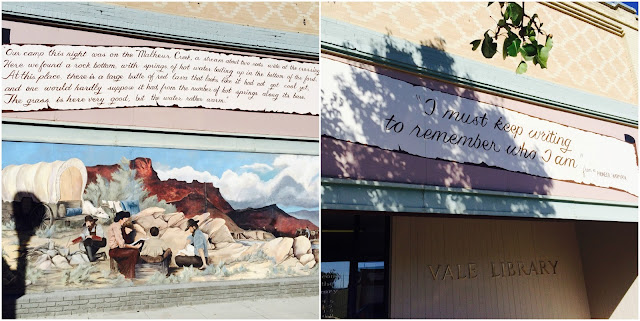 "Journaling" (1995) Dorothy Danielson - A mother reads to a child and a man writes in a journal while camped. "The Branding" (2000) Larry Bute - Branding in the willow corral, the cattle drive and the chuck wagon. 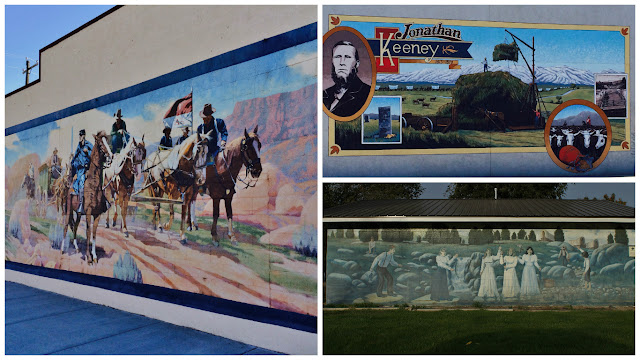 "Playing at the Nat" (2002) Roger Cooke - A family enjoying the warm waters of the Nataorium. "Walking the Planks" (2002) Roger Cooke - Crossing the Malheur River on the swinging bridge to the Natatorium.
It is hard to imagine what life was like on the Oregon Trail, all of the hardships they faced along the way and yet still kept going. Makes our first world problems seem rather insignificant.

Our Boise brewery tour, well not really a tour as we only hit two, was enjoyable just the same. We went to Cloud 9 Brewery. A small store front where they serve and brew. They have a nice outside patio, that we were able to take the dog into. We enjoyed a flight of four of their beers and also lunch, some of the best pulled pork since leaving the south. Next was 10 Barrels, which is out of Bend, OR. There tasting room is in an old building, lots of wood and exposed duct work, brick walls and big open windows. Their flights only come in 10 pre-picked beers, so we opted to go with a pint each instead. The beer was good and the atmosphere of the place was great.

Continuing on the Oregon Trail as we head mid state.

Till we meet again.

Tips and things we have learned along the way.
~ It's important to have people back home to back you up when needed. We don't actually have a "home" anywhere as we sold most everything before we hit the road, and while we do all of our bill paying on line we still get snail-mail. We actually use two different addresses. We have our "home" address in Asheville, we use our friend Janet's address for that. She receives anything local, such as voting info, DMV info and all of Les's medication from the VA. All other mail goes to our daughter, Katrina in Michigan. She opens it and then lets us know what we have received. When we are in one place long enough for mail to get to us, they will send us what they have.