October 25, 2015 found us traveling to Moses Lake, WA. There are no pictures of the drive as Nancy had a migraine and spent the entire trip in the recliner with her eyes closed. 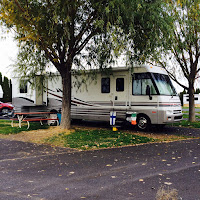 We stayed at the Suncrest RV Resort just off of I-90, but the only traffic noise we heard was from the road the campground was on. Nice park, well maintained with average sized lots.

They have a large pool with a water park and spa area, and a gazebo that sits on top of a hill that offered great views of the area.

The highlight of our stay was being able to see Michele and Eric Brinkert. Michele is the daughter of Kitt and Dianne Mahaffy, long time friends of Nancy's. Kitt and Nancy grew up together and Michele and Katrina went to grade school together. It was so great to spend time with them and see their new house. 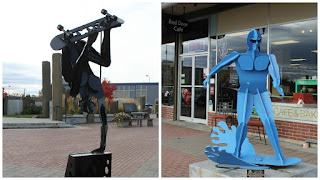 Moses Lake, they have fun metal sculptures on the corners, we got pictures of a small sampling of them, and the bowling alley has the coolest door. They have a great Farmers Market where we finally found some apple cider! 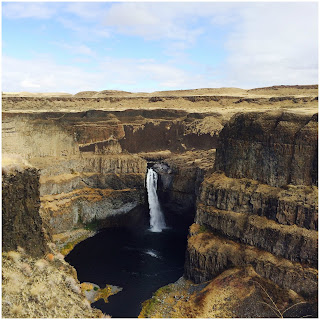 One would think we would have visited Palouse Falls while in Palouse, but no, they are closer to Moses Lake, about an hour southeast. These falls are the official water fall of the state of Washington. 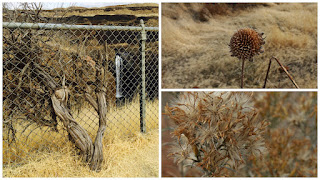 With a 198 foot drop from the Palouse River into a beautiful round pool that looks perfect for swimming, it makes for a stunning view. Some of the rock formations at the top made us think of the castles in the Hobbit movies.
Unfortunately the hiking trails have been closed due to land erosion and stupid people vandalizing equipment. There is a short walkway along the edge of the parking lot that affords you some great views of both the falls and the river. 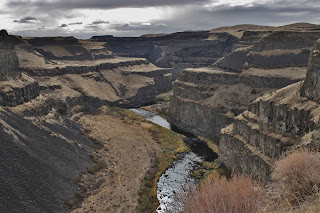 Seeing we couldn't hike we decided to head to Summer Falls, north of Moses Lake. After a two hour drive to get there we discovered it was closed and we couldn't get in.
It was a nice drive and it took us through a small town called Wilson's Creek, we love when we find places with our names. 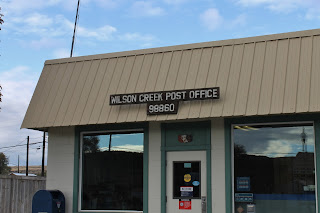 We are always on the look out for more waterfalls, even when they have no water. Dry Falls State Park was great fun to explore. Once again we are off season so we pretty much had the place to ourselves with the exception of a few fishermen on the lake at the base of the falls. 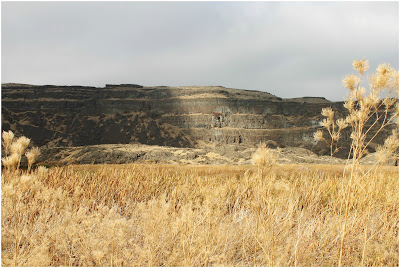 We hiked for a couple of miles across the fields at the edge of the lake, at times finding ourselves way off path. We spotted some deer off in the distance and lots of evidence of other animals based on the scat we saw and the remains of a few less fortunate critters. 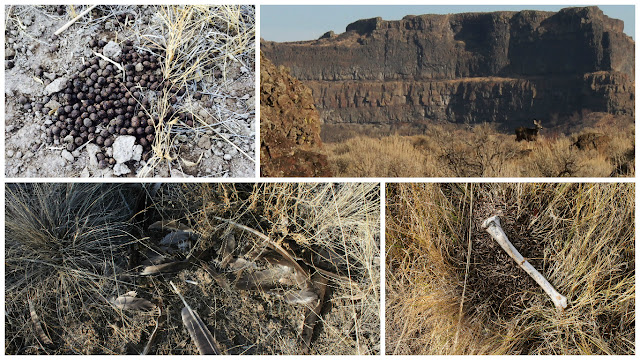 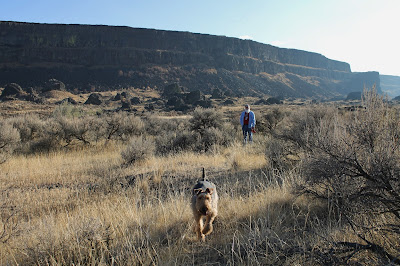 Mielikki loves it when she can run free off lead. She wasn't as thrilled when we were done and we had to pull a zillion (yes, a zillion) burrs out of her fur. Seeing there is nothing but sagebrush and brambles everywhere, burrs have been the bane of our existence. 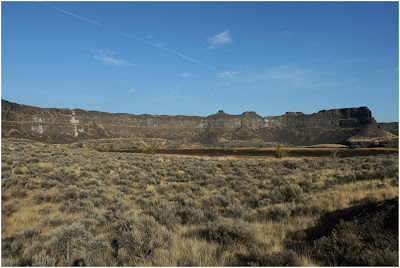 The scalloped rocks of the Dry Falls were quite impressive to see, they are 3.5 miles long, making it five times the width of Niagara Falls. It is believed that catastrophic flooding at the end of the ice age channeled water at 65 miles per hour over the 400- foot drop. Mind boggling to try and imagine that. 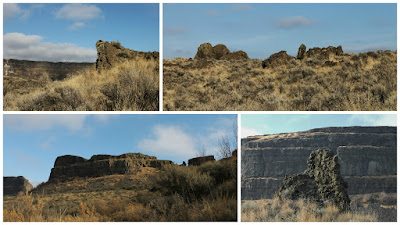 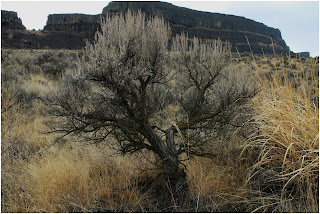 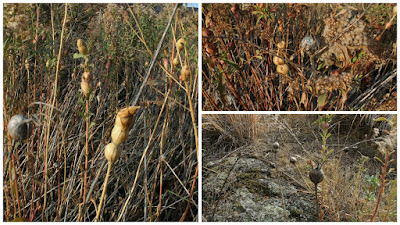 There were amazing rock formations and interesting weeds. The lake is quite beautiful as well. 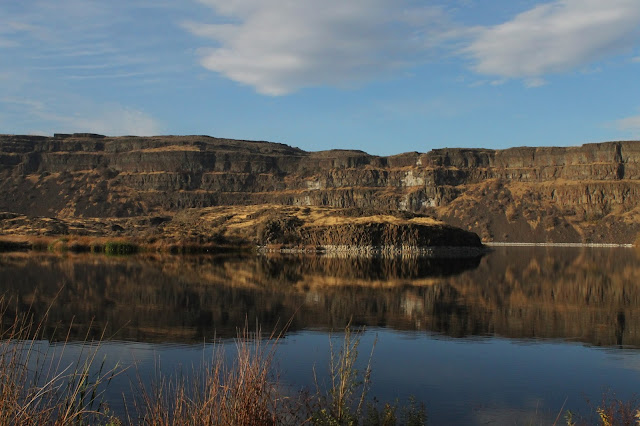 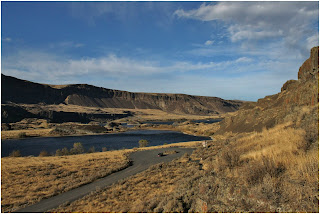 Lake Lenore Caves is just down the road from Dry Falls State Park, we stopped the day we went to the falls but only had about an hour of daylight left so went back another day. The hike to the caves is a little strenuous in places and very narrow in others, but it offers some great views. 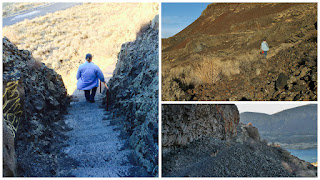 Nancy's fear of heights was once again challenged greatly at one point, but she pressed on, literately, as she pressed herself against the rocks to make it around a curve. 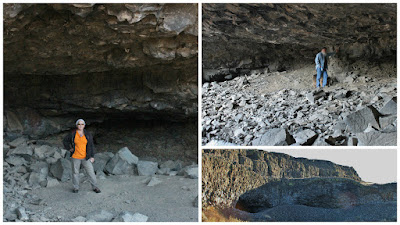 We hiked to five of the seven caves, most of them very shallow with one being big enough for us to walk into.
This area is considered one of the largest volcanic regions on earth and is still used today by local Indian tribes for various ceremonies.

In our search of Roadside Oddities we encounter our second dust storm, luckily our RV was not caught in this one. 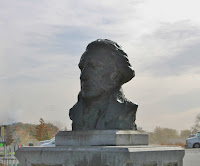 While in George, WA, gotta love the name, we decided to check out the Gorge Amphitheater  only to discover it was also closed for the season. We did get to see the bust of George Washington, which is about the only thing in the town of George.
Next we headed to Vantage to get pictures of the wild horse monument but due to the dust storm we never got to the memorial as I-90 was closed because of poor visibility.


While in Vantage we visited a cool rock and gem store that had interesting creatures outside. 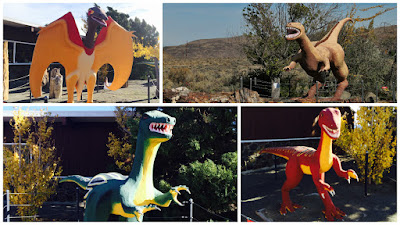 We also went to the petrified forest but after hiking only a short distance we decided it wasn't worth the hike as all of the wood was set into the ground encased in metal cages. Nancy did get to see some more lumbering giants up close and personal. 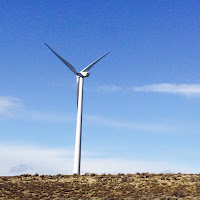