Les spent his October 18th birthday driving to Palouse, WA. A five hour trip, much longer than expected but that's what happens when you take back roads across mountains.

We arrived at the Palouse City RV Park with about an hour to spare before dark, it gets dark way too early now. We had an assigned space and when we pulled into it we discovered it was not very level, so we dropped the car and Les circled around and pulled in a little to the right. Nope that didn't work, so he circled again and pulled a little to the left. Nope that didn't work either. There were people across from us saying good-bye to a family pulling out and after checking the listing on the board we pulled into what was now a vacant spot, or should say we backed in as it was not a pull through.

Yea, a level spot. So a little over an hour later as darkness was setting in we were finally set up. It is a small park on the edge of town with only 10 spots. There is a park across the street with a river, playground and large open fields which is a great place for dog walking.


Downtown Palouse
is only a block away and the whole town is only 3 blocks long. We did have fun checking out the stores, they have two antique stores, a quilting store, a small boutique and an art gallery. Plus, a couple of places to eat. 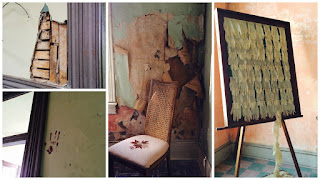 There is an old bank in town that the main floor has been turned into an art gallery, The Bank Left Gallery and a bistro. The upstairs, which originally held offices, has a few art pieces even though it has not been refurbished. It is an interesting building. 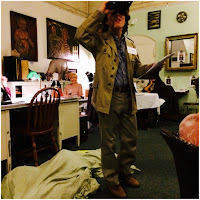 We attended a Murder Mystery dinner there on our last night in town. It was so much fun. The tables were set up in the gallery and the six actors served the meal in between acts. In case your wondering Norman did the dastardly deed. You gotta watch our for those bird-watchers. 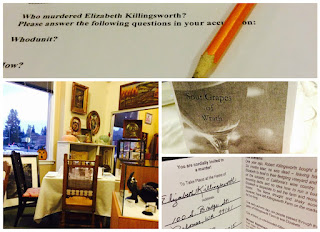 The last two weekends of October, the town hosts "Haunted Palouse". It is geared towards adults not kids, they have two haunted houses, and a haunted hayride, along with Zombies and creepy clowns wandering town. We walked through town Friday night to see what it was all about, it was really entertaining, and we were impressed that even though the town was full of college students, everyone was well behaved and no wild drunks around. 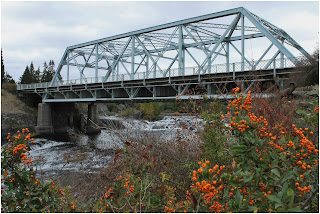 Spokane, WA is another interesting downtown area. Would love to live somewhere that has a waterfall in the middle of downtown, but we need to find one without snow! Riverfront Park is beautiful and the Snake River runs through it with a number of falls and rapids. There are walking bridges across the river in a number of places. 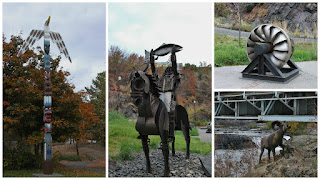 Along the walk ways you will find art work and beautiful flower beds.

Even the water power buildings were interesting. 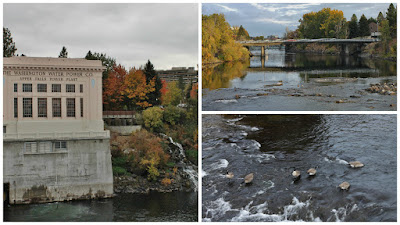 The geese were standing on the rocks of the rapids catching food as it came by. Pretty smart! 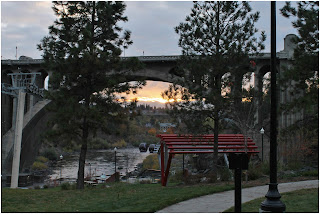 At the south end of the park is a large bridge that crosses the river, the gondolas go underneath it. We would have loved to ride them, but they only operate on the weekends. This section has multiple levels, lots of picnic tables and benches to enjoy the scenery, which on this day included a beautiful sunset. 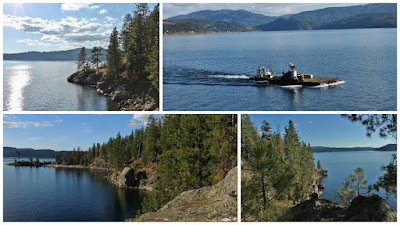 Coeur d'Alene (core da lane) is just across the boarder into Idaho from Spokane. Once again another really nice town. This one is on Lake Coeur d'Alene. The downtown is filled with lots of stores, restaurants, breweries and galleries. 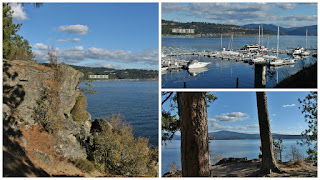 After exploring the town we hiked the 2 mile loop on Tubbs Hill, 120 acres of wilderness in the city, which gave us great views of the lake.
The water was so crystal
clear in the lake. 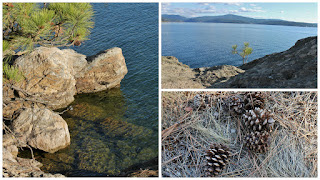 On the edge of town is McEuen Park and a marina that backs up to Tubbs Hill. The park has a large playground which includes water features, walking paths, lots of picnic areas and tall poles for Osprey nests that include webcams that provide an opportunity to view the osprey in their natural habitat. Osprey have been nesting on the poles since the mid-1980's. Originally the poles were used for lighting the ballfield that was once here, it is believed the osprey were attracted to the warmth of the lights. The 70-foot poles were left in place when the park was redeveloped and the cameras were added. You can find the webcams on the city website, City of Coeur d'Alene

We found a few Roadside Oddities and cool buildings in our travels this week. 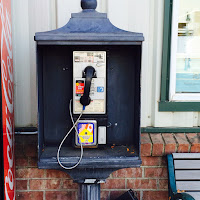 A pay phone in Palouse, and 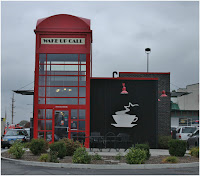 a coffee shop in Spokane. 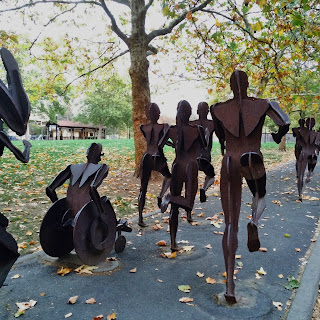 A cow in Garfiled, WA.

These running sculptures line one end of Riverfront Park in Spokane. 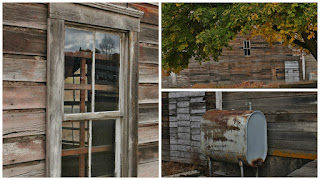 This old flour mill is in Oakesdale, WA. It is being dismantled and moved to Moscow, ID. 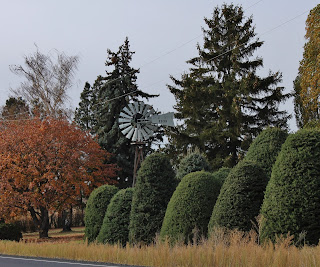 We traveled the road from Palouse to Pullman, WA a number of times. The check engine light came on in the RV while driving to Palouse so we took it to the Ford dealer in Pullman to have it looked at, we needed a new sensor but of course they had to order the part. This meant we went back to the campground and the next morning we packed up again and took it back to the dealer. It was like moving day three times this week! The 12-mile stretch takes you through lots of farm land, which offered up some nice photo opportunities. 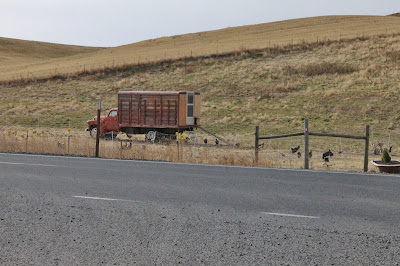 The best chicken coup ever, an old truck converted, with a ramp and everything. 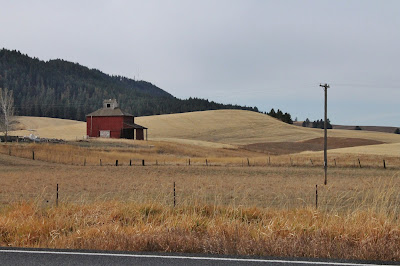 The farm lands were all rolling hills, which made for interesting views. 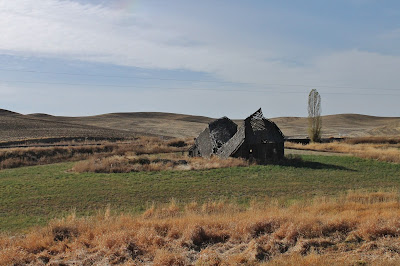 Not all the farm houses and barns have weathered as well as others.

One of the best things we went to Pullman for was dinner with Corey Bippes. He and Nancy worked together for almost 6-years at the International Center for Reiki Training, but had never met. All of their work was done via the phone or computer. Corey handles all the advertising for the "Reiki News Magazine" as well as jack-of-all- trades web designer, layout person, and anything else you can think of. It was so great to actually meet face and face after all these years. 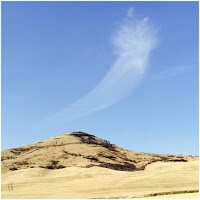 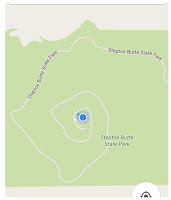 Steptoe Butte State Park is a 150-acre, 3,612-foot-tall butte that looms over the surrounding flat lands. It offers stunning panoramic views of the surrounding farmlands, mountains and other neighboring states ranges and peaks. After driving up the spiral road to the top you can see for 200 miles when the skies are clear. 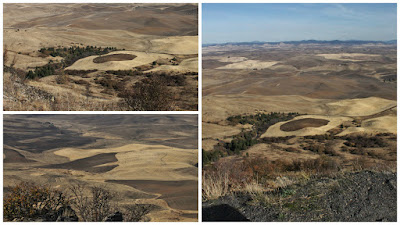 We watched a farmer plowing a field, he made great progress while we were there. In another field we saw the shape of a mitten. 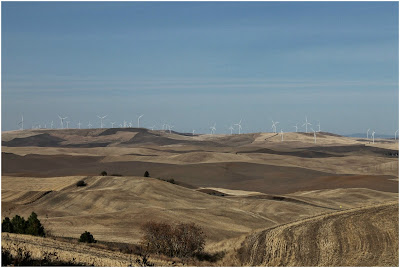 Nancy's favorite lumbering giants were seen in the distance. 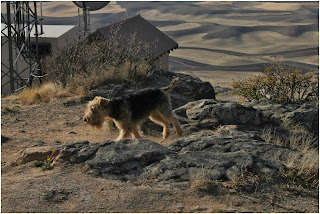 Mielikki enjoyed the views too. It was quite breathtaking in every direction.

Packwood, WA and Mt. Saint Helen's and Mt. Rainier are up next.

Tips and things we have learned along the way.
~ Water Filters - having them and checking them.
First, it is important to filter your water as you can never be sure from place to place what the water will be like. We usually stay in small towns, which makes the uncertainty of the water even greater. We triple filter our drinking water. We have a water filter attached to the hose that connects to our RV, there is a cold water tap at our kitchen sink that has a filter on it, and we put that water into a Brita Pitcher that we keep in the fridge. 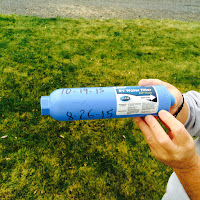 Second, it is a good idea to keep track of how long your filters have been in use. When we install a new filter to the hose, we write the date of installation on it, as we would never remember when we put it on. Over the last few stops our water pressure has been decreasing and when we arrived here it was almost non-existent. Les pulled the filter and hooked the hose up without it and the pressure was great - a good way to determine if it is the filter or not. They say the filters should last 3-months, but that depends on the water you have going through it. This one only lasted two. Once a new filter was installed, the water pressure was back to normal.
Posted by Nancy B at 7:10 AM