February 15, 2016 found us on the road again, this time into a new state. Las Cruces, NM was our destination. The drive was through mostly flat land until we got a little closer to Las Cruces and then we started seeing some mountains off in the distance. As usual when driving through the desert there is always a risk of dust storms, but this was the first time we saw these warning signs.
We played tourists along the way and stopped at Bowlin's Trading Post in Butterfield. A huge store filled with every tourist chachke you can think of. 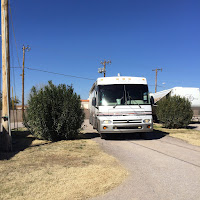 We stayed at the Sunny Acres RV Park, it has about 100 sites, well maintained, most of the campers are there for at least a month or more, many of them were from Canada escaping Winter. Sites were a little narrow but long enough for our RV, tow-dolly and parking the car. They had a nice dog park, even had toys for the dogs to play with. Mielikki made some new friends each day, and we got to compare travels stories with other RV'ers. 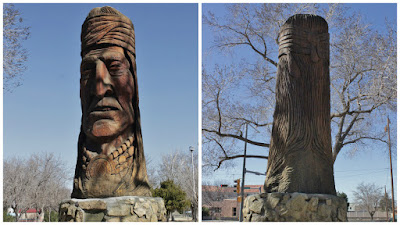 We were very excited that New Mexico's Peter Toth Indian was in Las Cruces. We missed the ones in Oregon and California, so we were happy to have found one again. This is the 54th statue on the Trail of the Whispering Giants, it was sculpted in 1986. It is titled Dineh, which means human in Navajo and Apache. He stands 20-feet tall and is carved from a pine tree. 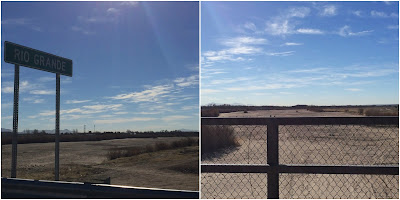 The Rio Grande River runs through Las Cruces, or used to anyways. It is completely dry now.


El Paso, TX is about an hour south. Unfortunately everything we looked up to do had reviews that talked about the bad neighborhood and warned about going there, and other places were not open on the day we went. We did drive through most of the city and there were some places that looked a little on the rough side. 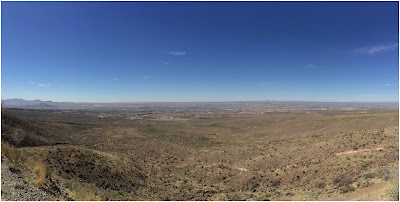 Hwy 375 is just north of the city and takes you through the Franklin Mountain Range. There is an overlook you can stop at that gives you a beautiful view of the city. The highway takes you to the eastern side of the town, with more views of the valley. 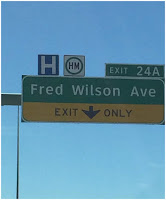 While driving through town we came across Fred Wilson Ave, don't think Nancy's dad was ever in El Paso, but who knows!

AK Enterprises which claims to be the biggest antique store in the Southwest, is right off of Hwy 10 on the north end of town. It is easy to believe their claim as the biggest, this place was huge. You have to be careful pulling into the lot that you don't run into something. Every spot is covered with items. Inside there are two stories waiting to be explored. We had great fun wandering through and looking at all the crazy stuff. 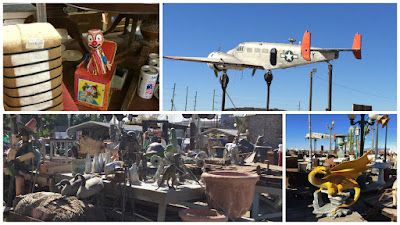 They have everything including lots of kitchen sinks and an airplane! 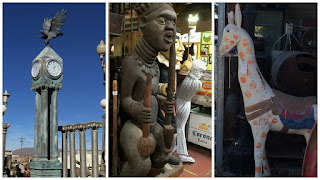 Statues every where and of everything. 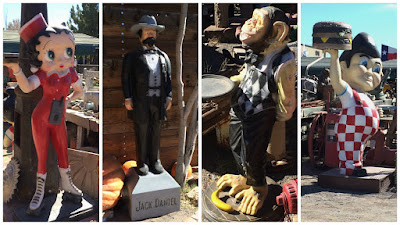 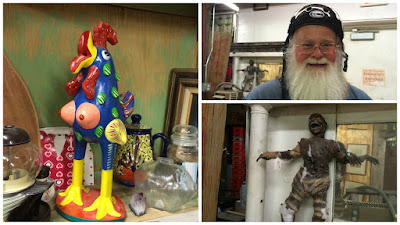 Funny and crazy objects and some creepy ones. Les thought he found a biking helmet, but it was just a little small. 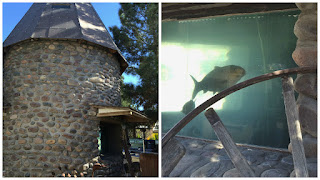 Outside there is a large round brick building that we thought was a storage shed. Only to discover it is a fish tank with very large fish in it.


White Sands National Memorial Park was recommended to us by one of the dog owners we met in the dog park.
Wow, what an incredible place. It is in the Tularosa Basin, a mountain-ringed valley at the northern end of the Chilhuahuan Desert. 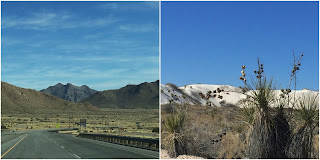 As you are driving to it, you are in flat land with sage brush and cactus, then you start to see small rolling hills, a little lighter in color but still covered in sage brush and then the hills start getting bigger and bigger with fewer and fewer sage brush.
Then you see the dunes! It was breathtaking and you know why they are considered one of the world's great natural wonders. The giant wave-like dunes cover 275 square miles of desert and create the largest gypsum dune field in the world. 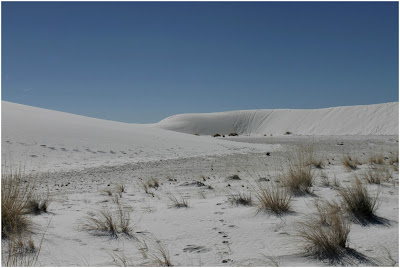 Only a few species of plants can grow fast enough to survive the ever changing landscape, as the dunes are constantly changing due to the wind. Several types of small animals have evolved white coloration to camouflage themselves, bleached lizards being one of them. 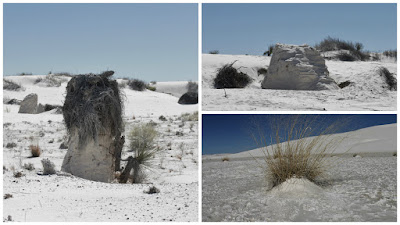 There is a really nice information center and gift shop.You can purchase a snow disk to sled down the dunes, we didn't realize it when we were in there or we would have gotten one. Watching people do it looked like it was a ton of fun. 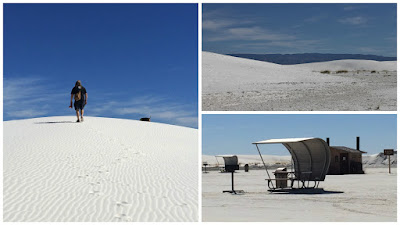 The entrance road leads you to the center of the park and loops back around. There are parking places along the way where you can get out and walk the dunes, and picnic areas with wind and sun shelters.

They have marked trails you can hike, or you can head off on your own which is what we did. It was like we had the whole place to ourselves. Mielikki had a blast running up and down the dunes. 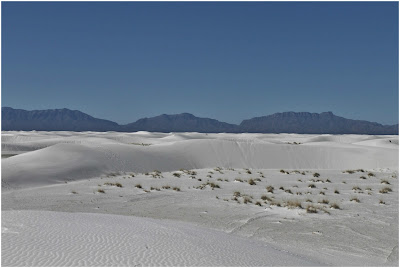 Once again there are not enough words to describe this place. Standing on top of a dune, you look out and see nothing but pristine white sand and mountains in the distance. The ripples reminded us of the beach, except these are caused by wind and not water. 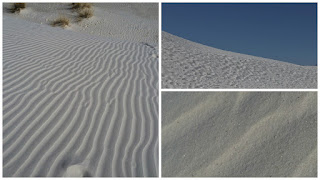 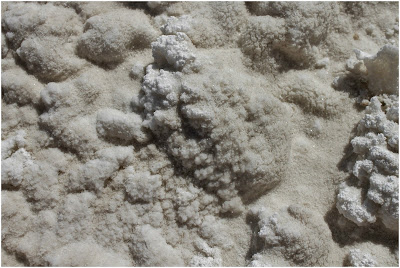 This is a rare form of sand. The common mineral gypsum is rarely found as sand because it is soluble in water. Rain and snow in the mountains dissolve gypsum from the rocks and carry it into the Tularosa Basin. Usually rivers would then carry it out to sea, but no rivers drain from the basin. The water, with the gypsum and other sediments is trapped here. As the water evaporates, gypsum is left behind. In some areas it is deposited in selenite form, freezing and thawing and wetting and drying break down the selenite into sand-size particles that are moved by the wind. Some of the surfaces where we walked were crusty bubble shapes, you can actually break off a piece and pick it up before it crumbles. 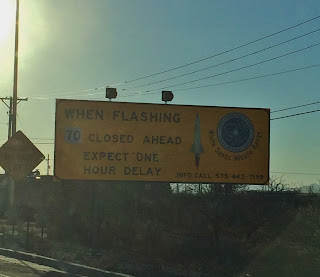 The White Sands Park is in the White Sands Missile Range, which is an open air test range that covers 3,200 sq. miles and is in five different counties in New Mexico. No missiles were tested the day we were there, but when it happens it disrupts traffic a bit.

From there we went to the Three Rivers Petroglyph Site. There are two trails, both fairly steep and rocky. You can't take dogs on either one but luckily there was a carport we were able to park under and the temps were cool. We took a quick 10 minute run up one of the trails. It is stated that there are more than 21,000 glyphs in this location.We did not see anywhere near that many, but we didn't do the whole site. The ones we saw were pretty cool. 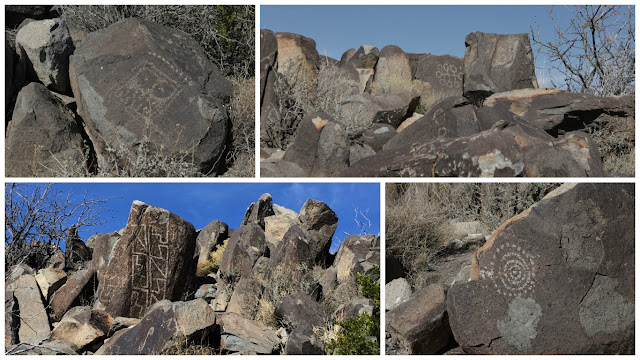 The views from the trail and the parking lot were beautiful. 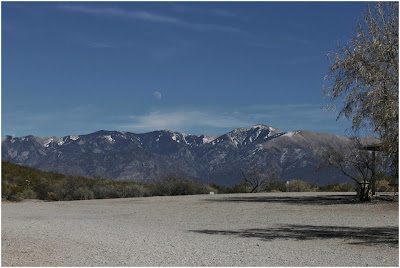 A few miles away is the Valley of Fires Recreation Area. Approximately 5,000 years ago, Little Black Peak erupted and flowed 44 miles into the Tularosa Basin spreading molten rock. The resulting lava flow is four to six miles wide, 160 feet thick and covers 125 sq. miles. This flow is considered to be one of the youngest lava flows in the continental U.S.
There is a paved, fully accessible trail that takes you out into the lava field and you can get a guide brochure that explains things along the trail.

We did find some roadside oddities in our travels. 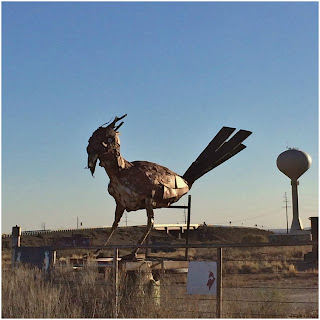 A crazy metal road runner in Alamogordo and also a giant pistachio. 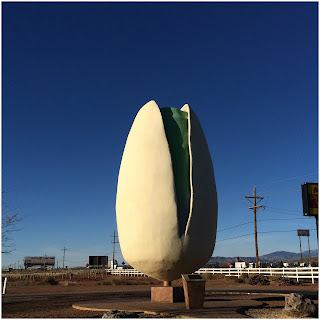 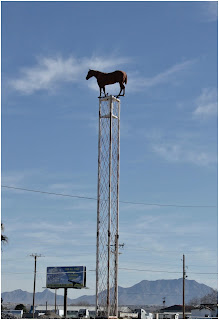 In Las Cruces, there is a horse on a pole, we don't really know why he's there. 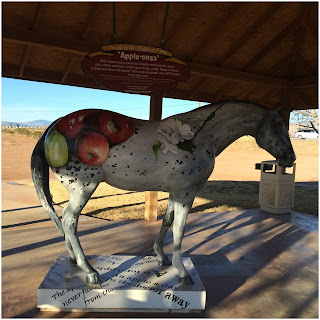 In Tularosa we found an "Apple-oosa" that has objects hidden in the painting on it.

Visiting the aliens in Roswell next.

Tips and things we have learned along the way
~ Using your noodle! 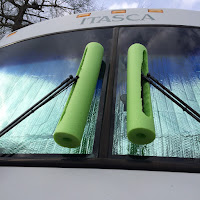 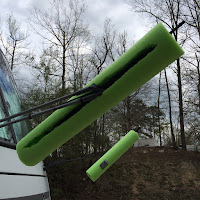 Pool noodles have found their way into many DIY projects. We learned this tip from another camper. Cut a pool noodle in half, then make slices on one side of it that your windshield wipers will fit into. By covering your wiper blades while parked, it helps to protect the rubber from sun exposer. We used 4" noodles and found it would be best to use 1-1/2 or 2" ones.