Midway is actually where we stayed, it is a very small town that is midway between Dexter and Roswell. We arrived there on February 18, 2016. 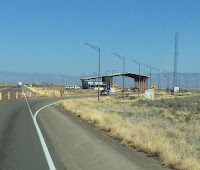 The most exciting part of the trip was going through the Boarder Patrol stop on Highway 70, 98 miles from the boarder. It is a very serious looking place. Cameras and spot lights everywhere, and fully armed guards with K9 dogs waiting for you when you pull up. We weren't sure if they were going to ask to board our RV, and what we would have done if they had asked. The Audi A8 two cars ahead of us got searched, but they just asked our citizenship and waved us on. Once we passed through the mountains, we were driving through flat as a pancake land. We did see some snow, and started seeing some actual green trees. 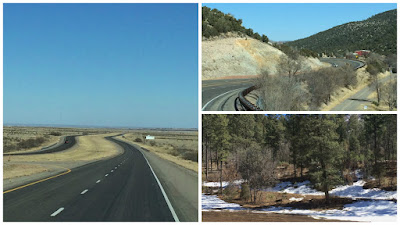 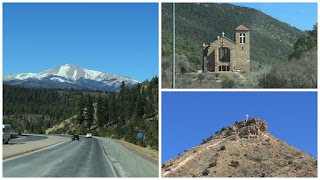 A pretty church on the side of the road, a cross on a hill and beautiful snow capped mountains filled out the trip. When we passed the Fox Caves we had to get a picture. 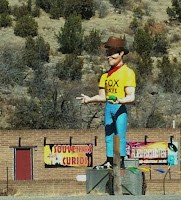 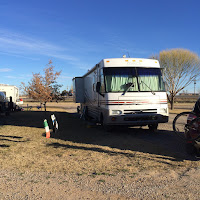 We stayed at the Midway RV Park, very small and not well marked as to how to pull in or where the office is. Sites were good sized, there was only water and electric hook-ups, no sewer. For a three day stay it wasn't a problem.

Besides visiting the aliens, Carlsbad Caverns was on our to-do list. We would highly recommend a visit here. It was quite incredible. The first person to enter the caverns was 16-year-old, Jim White, a Texas born cowhand in 1898. The first photos were taken by Ray V. Davis from 1915-1918, they appeared in the New York Times in 1923. This created interest in the caverns and from April 6 - May 8, 1923 Robert Holley, surveyed and mapped the caverns and recommended them to become a national monument. 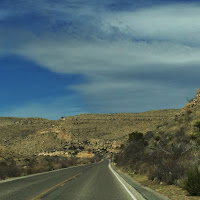 As you enter the park, you are driving through a section of the Chihuahuan Desert, a fairly flat area and then you start to climb and the scenery changes from scrub and cactus to rocks and boulders. 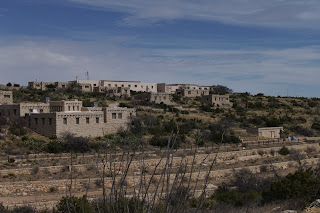 The Visitor Center and entrance to the caverns is at the top of the hill. They have a large gift shop, and a restaurant on site as well as a nice display room.There is also a dog kennel on site, which unfortunately we didn't know about so Mielikki got left home this day. 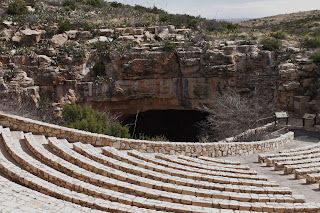 The entrance to the caverns for your self guided tour, is through the amphitheater where you can sit to watch the bats leave the caverns at dusk. Hundreds of thousands of Brazilian Free-tailed bats make their home here May through October. There are also guided tours that you can reserve. 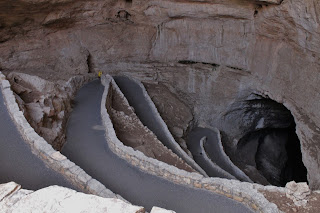 The path has a much needed handrail as many spots are extremely steep. About half way to the Big Room, is a rest area, that has bathrooms, a small gift shop and during regular tourist season a cafeteria.
The year round temperature in the cave is 56-degrees, so taking a sweater is advised. Portions of the Big Room are wheelchair accessible, with access via the elevators at the cafeteria level. The elevators can also be used to take you back up to the surface after walking down the path, but unfortunately they were not working on this day, so when we finished we had to walk back up. Up and up and up, 750 feet up. It was slow going, with many rest stops along the way. We kept playing leap frog with two other couples all the way up. The whole tour took about 4-hours and was well worth the effort. 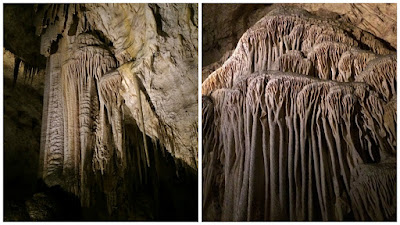 We saw amazing formations of Stalactites (dripping from the ceiling) and Stalagmites (forming from the floor). Many of which have made towers over thousands of years. 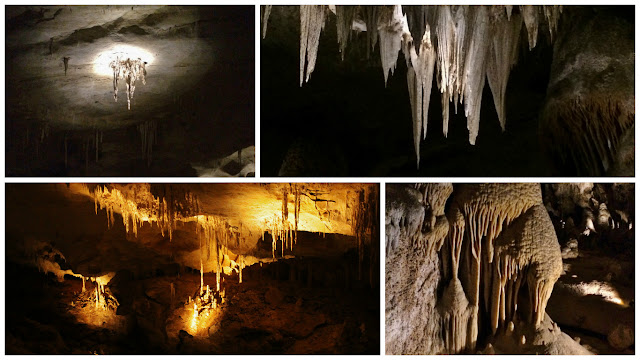 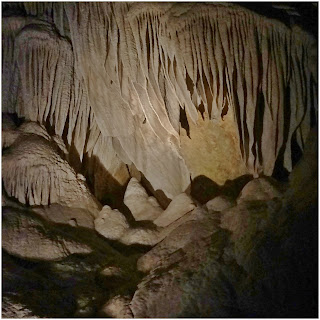 Some are called drapes, for obvious reasons. 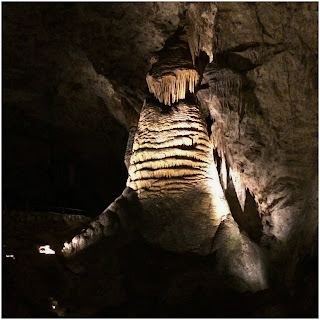 It was great fun picking out faces and other objects as we went. Our favorite was the sitting bearded dragon. The big eye was a little eerie, and the lion tails were a surprise. 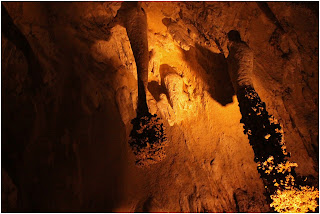 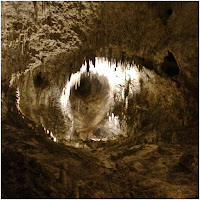 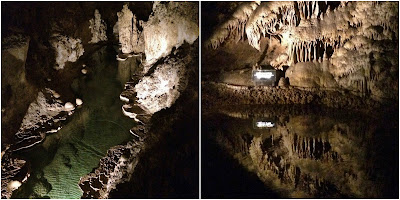 We came across two lakes, both so crystal clear you can see to the bottom.

As we hiked back towards the entrance on our way out we could see fog highlighted by the sun in the cavern opening. 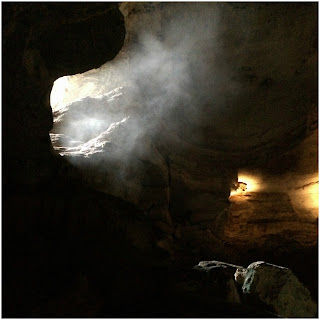 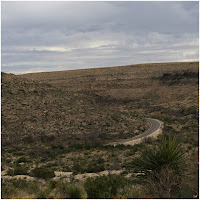 The view on the drive out was beautiful, a perfect ending to a great day.


A visit with the aliens was what brought us to this area. We were actually a little disappointed in downtown Roswell. We expected there to be much more alien related things throughout town. There is the International UFO Museum & Research Center, which is the main attraction. It was interesting and also a little hokey at the same time. 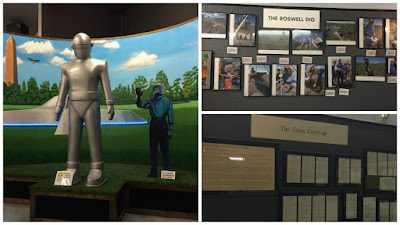 Lots of pictures and documents from the Roswell crash site. As well as mock ups of captured aliens. 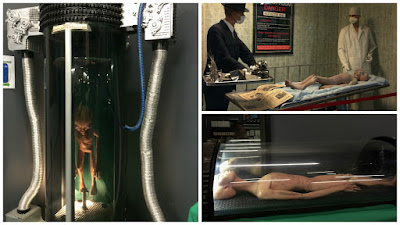 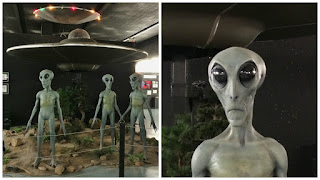 In the center of the museum there is a "working" spaceship. All through out the displays is alien artwork.

A section of the museum is dedicated to alien and UFO research. 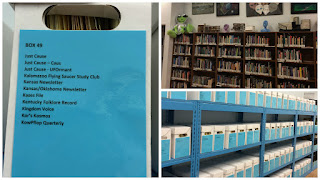 As expected there are a number of tourist shops where you can buy everything alien, all of them pretty much had the same items and an alien statue outside their door. 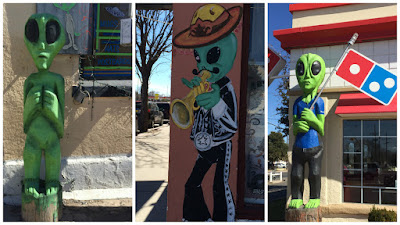 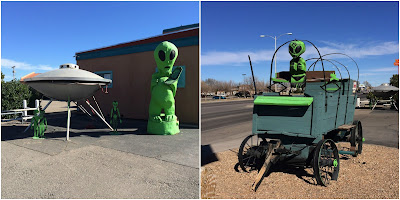 If you are going to be anywhere near Roswell, it is worth going just so you can say you have been there. In all honesty we are not sure we would recommend going out of your way to get there.

Texas is up next!


Tips and things we have learned along the way
~ Don't let your sliding pantry get stuck!
We have shared other tips about securing things when you are on the move. Here is one more, if you have a slide out pantry like we do make sure that taller bottles are secure on the shelf so they cannot tip. 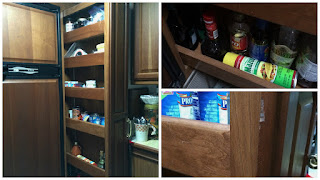 We had a bottle of vinegar at the back of one shelf and it tipped forward while we were driving. The pantry would only slide out about an inch. The opening to work with to tip the bottle back was only about a half inch wide. We had to use a long metal bar to reach to the back and tip the bottle. We ended up scratching the wood on the shelves. Now we make sure all the tall bottles are at the front and secured in on the shelf.
Posted by Nancy B at 8:00 AM