September 18, 2016 we left our lovely little spot that was home for so long and headed west into Kansas. It was a straight shot down Highway 54 from one campground to the next. The road had a few hills but for the most part was straight and flat. This was the reason Nancy got brave and drove the RV. She test drove it before we bought it, a couple of blocks around the dealership and had never been back behind the wheel. It wasn't as bad as she expected, but the 91 miles she drove had no big cities or much traffic to contend with and only one turn at the very end. She is still pretty proud of herself though and Les got to experience what it's like in the passenger seat! 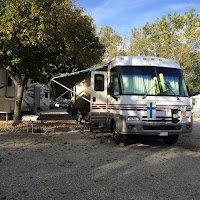 We stayed at the Deer Grove RV Campground which is just east of El Dorado. It is a small campground with mostly permanent trailers, and is basically a large gravel lot. There was grass around the edges, and a few trees for shade. They have a small dog park. Laundry room was clean with two of each machine. We paid $32 a night with our Good Sam discount.

A visit with President Eisenhower is one of the things that brought us to this area. His museum and library are in Abilene, and are built on the grounds of his childhood home. 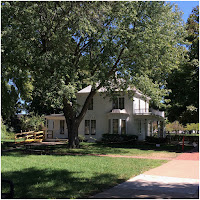 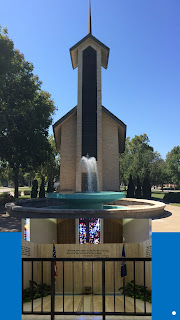 There is a Meditation Chapel, which is where Ike and Mamie are buried.
The Visitor Center is where you start, you can browse the gift shop and watch a movie that outlines Eisenhower's life. You get a short tour of his childhood home, just the first floor and then you can wander the museum at your own pace.

This is our least favorite so far. The museum starts with WWII, which of course he was a leading figure, but it felt more like a war museum than one about Eisenhower. 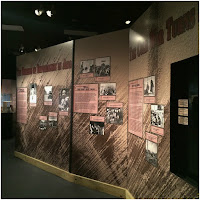 The displays are wall after wall of pictures and descriptions that follow a timeline as things happened.

There was a section of woman's accomplishments during the war. Of course, most everyone knows about Rosie the Riveter, but not everyone knows the story behind it. The famous graphic of a woman rolling up her sleeve saying "We Can Do It" is not actually Rosie. It is Geraldine Doyle, who was 17 when a photo of her was taken in 1943, for the Westinghouse Corporation. At the time she was working at a metal factory in Ann Arbor, MI. Rosie the Riveter was a song written by Redd Evans and John Jacob, about women in general, the image grew to represent the independent woman and her strength. 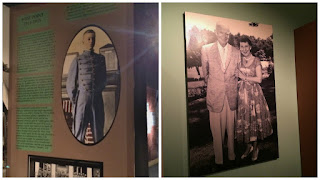 There was very little about Ike's life prior to his military training at West Point, most of what you learn is in the movie you see at the beginning. The section for Mamie was mostly clothes with a few displays of her charitable work. 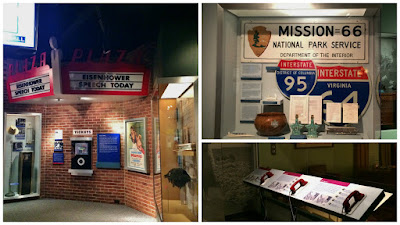 Neither one of us came away with any feeling for what the man himself was like, or what Mamie was like.

There was actually very little about his presidency and almost nothing about his life afterwards. Most of the other museums had lots of interactive displays, this one has a few videos and just one bank of phones to listen in on conversations he had. 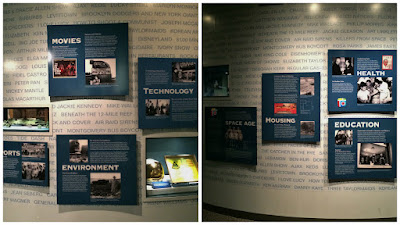 One rounded wall listed the achievements during his presidency, which there were many, but it left us feeling like they just glossed over them.

We were told that the museum will be closed for all most all of 2018 so they can redo all of the displays, so hopefully it will be better. Based on reviews we have read we are not the only ones who felt this way. 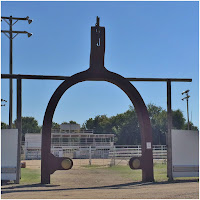 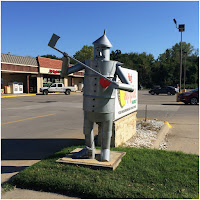 We found a few Roadside Oddities in Abilene. A happy looking Tin Man and a Giant Spur gateway at the Fairgrounds.


Our drive to and from Abilene took us through the prairies that Kansas is famous for and some interesting towns. 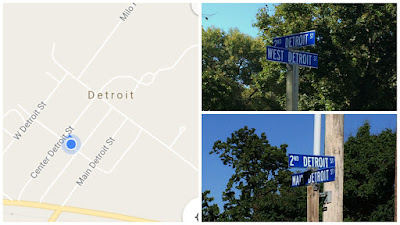 Lots of places that reminded of us home. Detroit was a great find, a little smaller than our hometown of Detroit, MI! 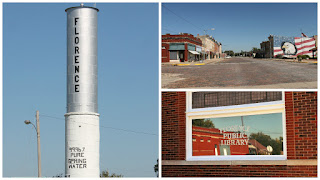 Florence, was Nancy's moms name, we have found a number of towns named after her.

This old Standard Gas Station was in Strong City. We loved the old cars. 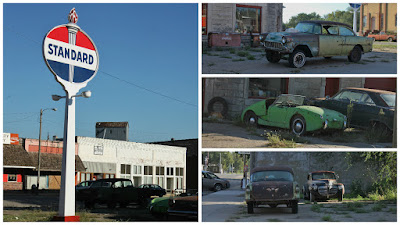 While we did not see the Wichita Lineman, we did see a number of cool things in Wichita. Roadside Oddities of course. A Rooster on the roof of a donut place, and no we didn't stop for donuts this time. The Muffler Horse stands on the sidewalk downtown. 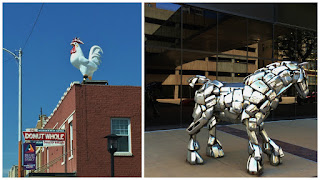 Some Oddities are a little more serious than others. The Lunch Counter, is a tribute to the soda fountain sit-ins of the 1960's. 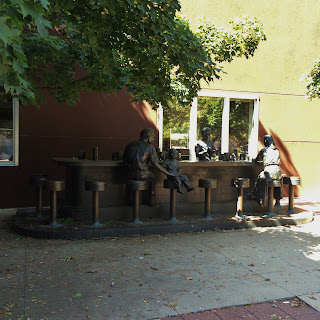 This sits where a Woolworth's used to be, there was a sit-in at this store in 1958, thought to be one of the first sit-ins in the country. 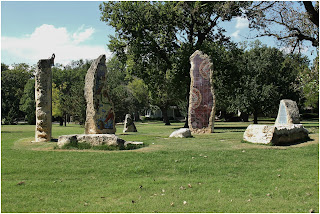 The Mini Stonehenge Astrological Calendar is in Central Riverside Park. The stones have beautiful mosaic designs on them. 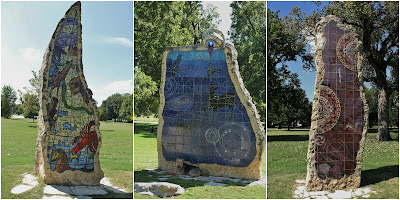 The sun comes through a hole in a piece of blue stained glass, which casts its shadow on the metal date markers. 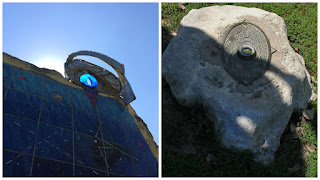 There are some beautiful old buildings we well.


The Keeper of the Plains is an amazing sculpture that sits on top of boulders and is surrounded by Indian artifacts and history. 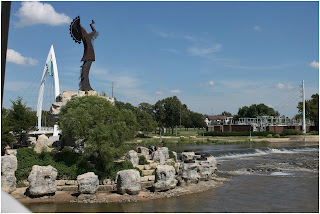 He sits at the end of the property of the Mid-American All-Indian Center. A large building filled with American Indian History. 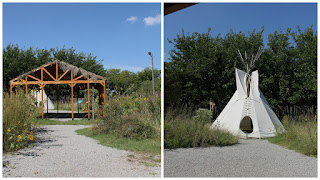 They hold ceremonies on the expansive lawn, there is an outdoor educational area, and plaques along the walkway with information about local Indian artists. 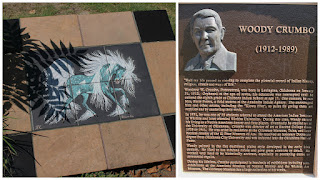 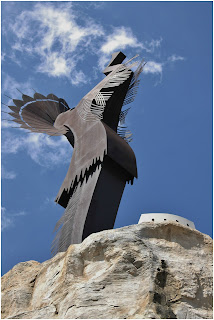 Blackbear Bosin, a Kiowa-Comanche artist, donated this piece of work to the citizens of Wichita in May of 1974. Bosin's ancestors camped on this spot. Made from weathering steel, he extends his arms in supplication to the Great Spirit. "All living creatures are Indians' brothers" Bosin said. The Keeper was chosen as one of the official emblems of the 1976 American Bicentennial. It is stated that the statue and the All-Indian Center "will symbolize the coming together of the Indian culture, first within itself and then with the non-Indian."

El Dorado is a fairly small town, but they have a fabulous park system. There is a paved walkway that connects the parks together. We enjoyed a nice stroll down one of them.
Most of the path follows along the river that winds through town. 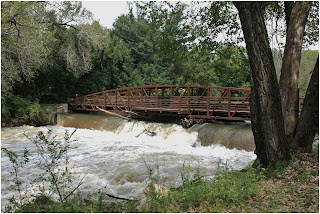 The path crosses under the train tracks in a number of places. It always strikes us as funny when we see trains that do not have graffitti on them. Most small towns have clean trains, you can always tell which ones spent time in a big city. 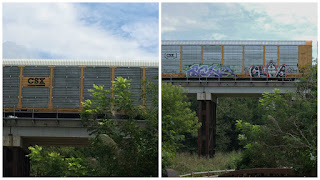 Like everywhere else, Kansas is having a very hot fall, it was in the 90's this day and Mielikki was trying to find shade anywhere. Unfortunately, she picked a weeded area to cool off in. It took a number of brushings to get all the burrs out. 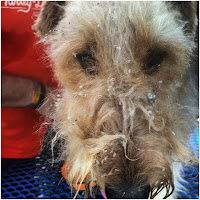 This was quite the stop for Nancy, first with driving the RV here and second she got all her hair cut off.

She has hesitated getting it cut because she is not thrilled with finding a new hair dresser every 4 weeks or so. It has been so hot, and with her very thick hair it is a lot of work having it long.

So off it went. Sheri at Forever Young in downtown El Dorado cut over 8" of hair off, the piles of hair on the floor was pretty crazy.
This new short look will be so much cooler and easy.

Tips and things we have learned along the way.
~ Making a list and checking it twice.
Yes, Les looks like Santa but we are not talking about a Christmas list. As we have mentioned before we usually stay off the beaten path, it's usually quieter, cheaper and puts us centrally located to activities we want to do. It can also mean that stores, even a Walmart can be 25 - 30 miles away. So with his in mind when you are working on a project of any sort and need to run to the store check all your supplies before you go. Les's last project had him making multiple trips, over 40 miles round-trip, to get all the supplies he needed. That was gas money and time we didn't really need to spend.
Posted by Nancy B at 8:53 AM