September 1, 2016 - like most everyone else we couldn't believe it was September 1st! This is the day we moved to Osceola, a little town in the middle of nowhere. We were actually closer to El Dorado Springs but as is usually the case the mailing address is someplace else. 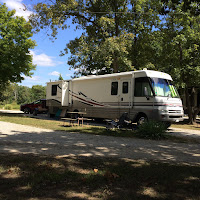 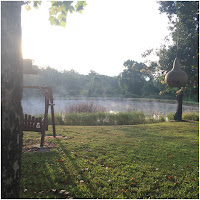 Arrowhead Point RV Park is where we had planned to stay for a week, due to some issues with the RV we ended up being her for 17-days. Couldn't have picked a better place to stay so long. It is beautiful, very well maintained, with a small pond, cabins you can rent and nice long RV sites. Bill greeted us with a big smile and some great stories. Anne was so sweet, she even stopped by on our last morning to say good-bye. Our site was plenty long enough for the RV, tow-dolly and parking the car. They are about average width but angled so that you are not sitting on top of your neighbors hookups. WiFi was pretty good. Site is gravel but very level with a strip of grass and a picnic table. We were in a shady spot, as we don't use our TV, but there are open spaces for satellite users. 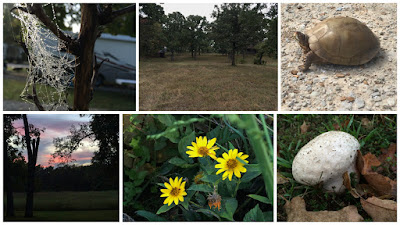 Plenty of room to walk the dog and big fields behind the campground to let her run off lead. They have places through out the camp and around the lake to just sit and relax. Nancy's morning walks resulted in lots of pictures, some flowers, turtles, spiderwebs and more. Laundry room was very clean and they have a club house that you can use.
One morning there was some beautiful fog, but mostly just sunny skies while we were there.
The front porch of the clubhouse has a number of hummingbird feeders that had lots of activity. Dozens of birds at a time.

Independence, MO is home to the Harry S. Truman Museum and Library. 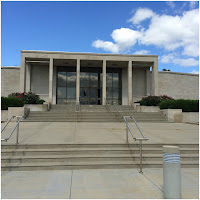 It is a rather nondescript building set in a pretty park like setting. The lay out is very similar to the others we have visited, where you follow along the history of person as you pass from room to room. This one was a little different as the main floor is his political life and his childhood and family information is on the lower level. Neither one of us knew much about him, so it was a nice learning experience.

His presidency was full of turmoil, thrust into the job after President Roosevelt died, and in the midst of war couldn't have been easy.
One room was a wall of newspapers from the time. The front page of the papers were presented for you to read. 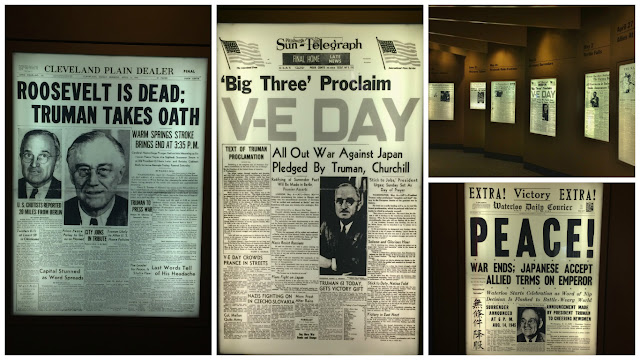 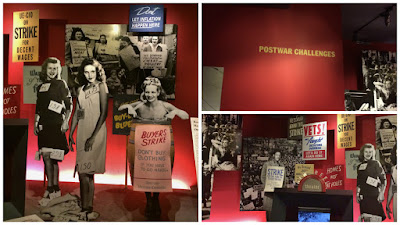 After the war, the challenges had just started here at home. As things settled down, the middle class really started to grow and "luxuries" like refrigerators and TV's were becoming more common place. 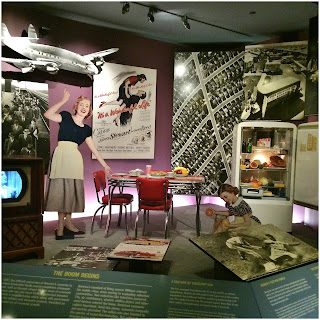 President Truman was a strong supporter of the little guy. 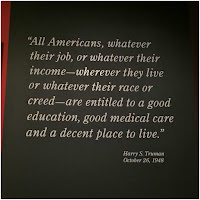 He was also a supporter of Civil Rights, which divided his party and almost cost him the reelection. 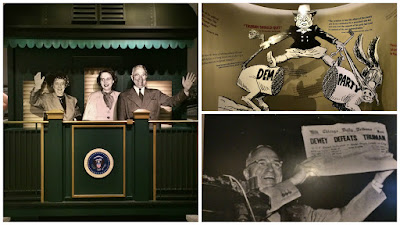 The famous newspaper headline of his defeat is about the only thing we knew of him prior to our visit. 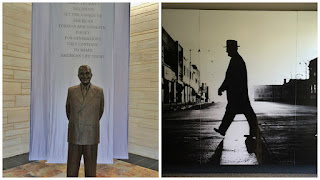 Both Harry and Bess Truman are buried here in the court yard. There is construction work being done so we couldn't go out to the sites, but they are laid to rest between the two trees in the center of the picture. 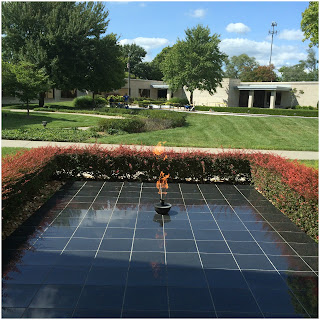 The eternal flame was given to the Museum by the American Legion Post #21 and dedicated to the memory of the President who was also a Legionnaire.


Troy, KS was a little farther than we normally travel for a day trip, but the Kansas Peter "Wolf" Toth Indian carving is there. He sits on the lawn of the Doniphan County Court House. It is the 29th carving on the Trail of The Whispering Giants. He was carved in 1978 from a Burr Oak and stands 30-feet tall. 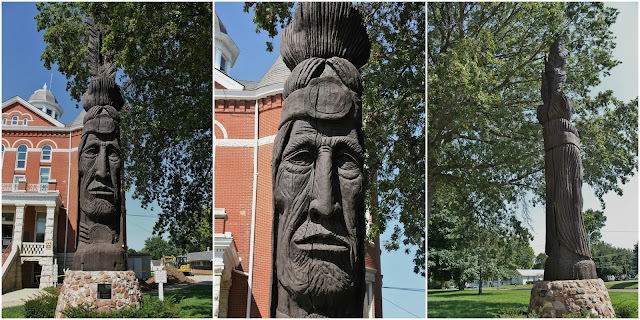 Our travels to and from Troy took us through a variety of familiar sounding towns. It is amazing how many towns go by the same name, we went through a number of Michigan towns Garden City, Adrian, Lansing, and Dearborn. Then there was Nevada, Prescott and one that you don't see very often, Peculiar! 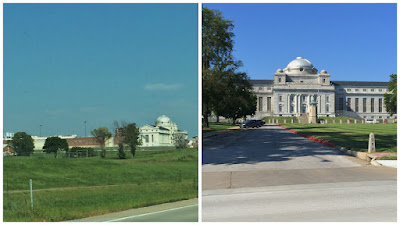 We also drove through Levanworth, KS which is home to the Leavenworth Prison, we didn't stop to visit. It is a huge sprawling complex and not at all what we would have thought it looked like.


Atchison, KS is the birthplace of Amelia Earhart. She was born on July 24, 1897 in the home of  Alfred and Amelia Otis, her maternal grandparents.

Her mother Amy, did not believe in bringing her children up to be "nice little girls". So Amelia and her younger sister had quite the adventurous childhood exploring the outdoors. She was always interested in the sciences and woman's achievements but not aviation. She kept a scrapbook of newspaper articles and information about woman who were working in fields that were considered at the time to be strictly a mans field. She attempted college a few times but had to quit due to financial and family issues.

In 1918 she attended an airshow and was enthralled by the planes, she later commented "I did not understand it at the time, but I believe that little red airplane said something to me as it swished by." On December 28, 1920 while attending an airshow with her father, pilot Frank Hawks took her up in his plane. "By the time I had got two or three hundred feet off the ground, I knew I had to fly", she said later. After the 10-minute flight she became determined to learn to fly. She saved every penny and with a little help from her mother she raised the $1,000 to take lessons from Anita "Neta" Snook, a pioneer female aviator.
She wanted to fit in with the other pilots and chose a leather jacket, knowing that the other aviators would be judging her, she slept in it for three nights to give the jacket a "worn" look. To complete her image transformation, she also cropped her hair short in the style of other female flyers.  On May 15, 1923, Earhart became the 16th woman to be issued a pilot's license 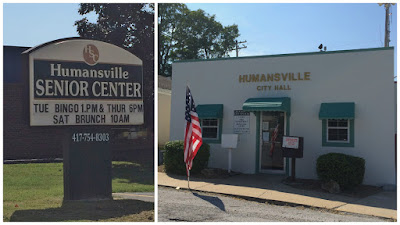 On our first trip to Springfield we made a couple of detours, first was Humansville, we got such a chuckle out of the name we had to go and explore!


The next detour was through Boliver, Nancy's sister Jeanne lived in Boliver, OH which is a small town south of Canton/Akron. We assumed this Boliver would be about the same, but we were wrong, it is quite a large town. They have a beautiful court house in their town square that is bigger than the whole town of Boliver, OH. 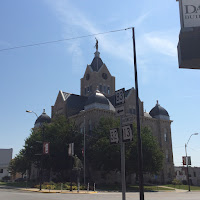 As you know we are always on the lookout for Roadside Oddities. Some of these were found while traveling Route 66, others are from different adventures. 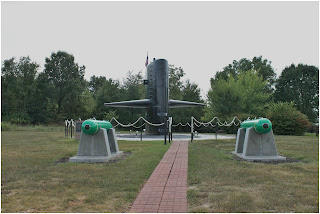 In Springfield we found a Giant Fork and a Submarine coming out of the ground.


While we were waiting on a part for our generator to be fixed we treated ourselves to some Hurt's Donuts - now that takes you back to your childhood doesn't it! It reminded us of Voodoo Donuts in Portland, OR. 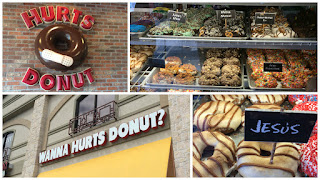 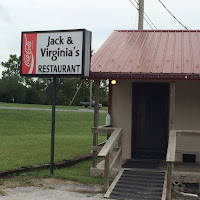 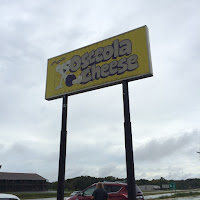 Not far from our campground was the Osceola Cheese Shop, yep it was awesome! 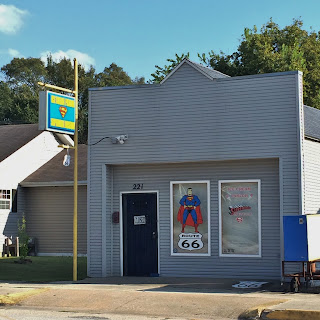 In Carthage we found a Crop-duster Tractor Plane and in Carterville we came across an ice cream store that is also a Superman Museum, we were so bummed that it was closed. 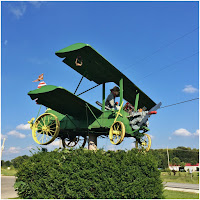 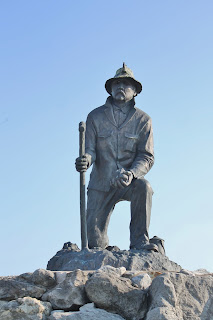 In Webb City at the King Jack Park there is a Kneeling Miner and Giant Praying Hands.
Nancy caught the sunlight just perfect behind the flag. 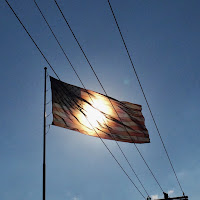 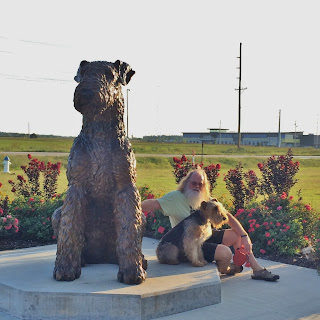 Our favorite was the 8-foot Airedale statue in Joplin. Of course Mielikki was scared of it so Les had to sit with her for the picture.


The largest oddity we found was
Red Oak II. 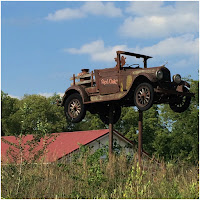 It is located just outside of Carthage, MO, and is the creation of Lowell Davis an artist who many have called the Norman Rockwell of Rural Art. He was raised in Red Oak, MO and moved to Dallas, TX for work. 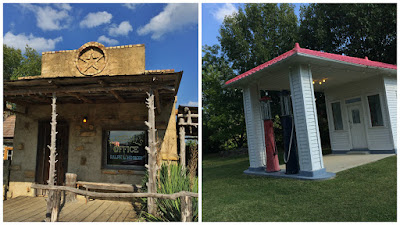 He missed the simpler life of the country and was saddened by the decline of small towns in America. When he moved back to Missouri he found his hometown of Red Oak had turned into a Ghost Town. In 1987 he started buying the old businesses and homes and moved them 23-miles to his Fox Fire Farm. 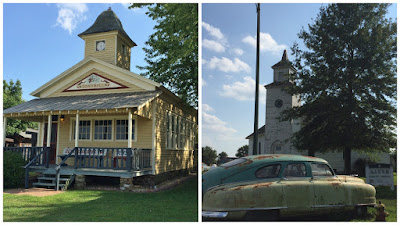 At the time the area was just farm land but to Lowell it was a blank canvas, "I don't believe that an artist should be restricted to use only paint or clay. It can be anything including junk, wood, even an old building. To me, Red Oak II is a combination of a painting and a sculpture, and it is just made from things that someone else threw away." 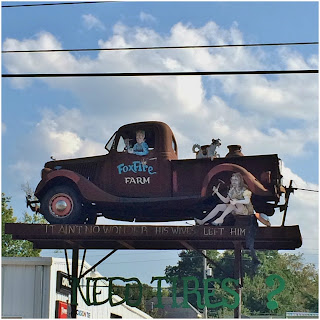 The church holds a Sunday morning service and on Saturday nights there is a blue grass jam session that takes place.
As you pull into Carthage, this pickup truck, an advertisement for Fox Fire Farms greets you. The caption under the truck says "It ain't no wonder his wives left him"

A real bonus to staying longer here was that we got to see our good friend Janet, from Asheville. 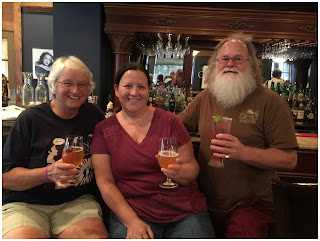 She was biking the Katy Trail and was about an hour from us. It was so nice to see her and share some good beer with her.
We explored a little of Sedalia and were treated to a homecoming parade - in the rain.

The Katy Depot Welcome Center is one of the stops on the trail, they have a nice gift shop and some cool metal sculptures on site.

One day Nancy will learn how to weld and make something as cool as this pole of tools.

Next up is El Dorado, KS where we will spend a day with Dwight Eisenhower and explore Wichita.


Tips and things we have learned along the way.
~ Driving the highways and byways
Just a reminder that when you are driving and there are RV's or trucks towing a trailer they need to be treated like a semi-truck. We can't stop quickly, or change lanes as easily as a car. If you're entering a highway and an RV is in the right lane - speed up like you would for a truck. If you are switching lanes, leave room in between you and the RV. It is amazing how many people treat an RV or trailer like it's another car.
Posted by Nancy B at 8:01 AM