Casa Grande
December 27, 2016 we moved to Casa Grande, AZ which is about 45-minutes south of Phoenix. 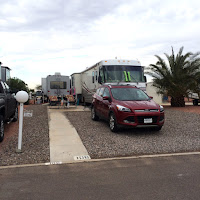 We stayed at the Sun Scape RV Park. This is a very large "snow-bird" destination with over 500 sites.
Many of the sites are personally owned and have small homes on them. Our site was back-in with full hook ups. We were able to store our tow-dolly on site and have room to park. The sites are a little wider than normal and very level. WiFi was good and our Verizon signal was strong. We paid $26.25 a night with a combination of Passport America and Good Sam discounts. 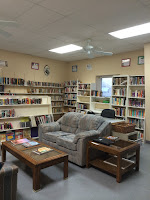 The park is very well maintained and offers tons of activities. There are dinners, breakfasts, card nights, dances, happy hours and more. They have a wonderful activities building with a library, computer and craft room, fitness room and billiards. The laundry room was very clean. 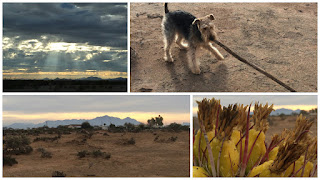 There is a large field just outside the park for dog walking and running off lead. 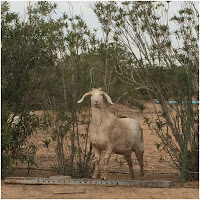 When you dropped off trash or recycling you were greeted by this guy who lives next door, think he was looking for a hand out. 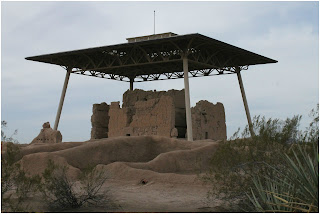 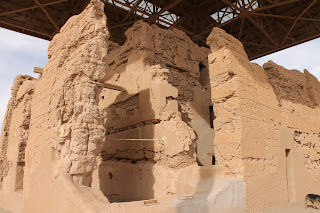 The Casa Grande Ruins were just a few minutes away. They are the namesake of the town. When early Spanish explorers discovered it in the late 1600's they named it Casa Grande which means "Great House". It is the largest known structure of the Ancestral People of the Sonoran Desert. It is four stories high and 60-feet long. The walls face the four cardinal points of the compass. A circular hole in the upper west wall aligns with the setting sun and moon at specific times. The Ancestral People who lived here were hunter-gathers, farmers and traders. They built an extensive canal system to irrigate their fields, many of the same paths are used today. Casa Grande was the nations first archaeological reserve, designated as such in 1892. The steel and concrete canopy that helps to protect the ruins was built in 1932. The buildings were made of caliche, a desert soil that is rich in calcium carbonate. 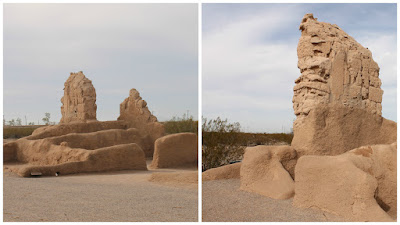 It was mixed with water in shallow pits to form a stiff concrete-like material. The walls were formed by hand. You can see horizontal lines in the walls that show the thickness of each layer of caliche that was laid down and then left to dry before the next layer was put down.

The complex was quite large with a number of buildings and an outer wall surrounding it. 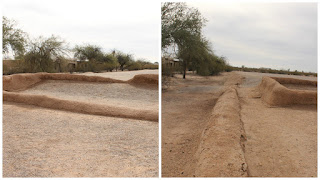 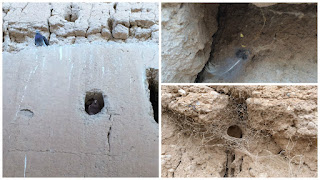 A number of birds and small critters have made this their home.

No one knows what name the people who lived here called themselves. Archaeologists use the term Hohokam to label the culture that flourished here from 1,500 years ago to 550 years ago. Six tribes in the Southwest today still have histories that link them to the people who once lived here. For them this is a very sacred place and ceremonies are held here through out the year. 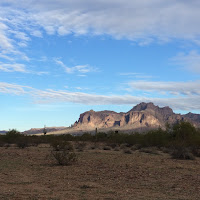 We went to Apache Junction to visit with Suzie Loos who we met while hiking the Blue Mesa Trail in the Petrified Forest back in October. She has traveled through-out the states starting in Alaska and is spending the winter months in Arizona. We had a great time catching up and sharing stories. The views of Suspicion Mountain weren't bad either. 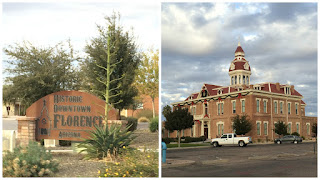 On the drive back home we went through Florence, AZ so of course had to get pictures and the beautiful court house was a bonus. Florence was Nancy's moms name. 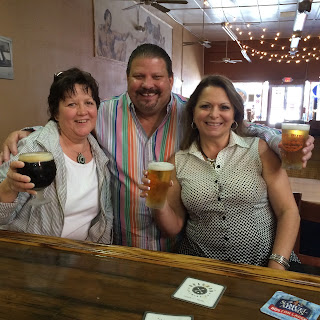 The best part of our stay here was we got to spend time with Chuck and Gina, Nancy's nephew and his wife from Phoenix. They came down and spent a night at the Franciso Grande Hotel and Resort. We enjoyed a wonderful dinner at Duke's, named after John Wayne who was a frequent guest and had a penthouse suite. We sat for hours talking and laughing. The next day Nancy left Les home to finish his chores and she met Chuck and Gina at the Old Town Ale House where they shared some great craft beer and then we stuffed our faces at the Macayo's Mexican Restaurant. There was a couple across from us celebrating a birthday and they asked Chuck to take a picture of them.
It was a true Chuck moment, he had them do different poses and then proceeded to show her how to email the pictures to family. The best part was when he paid for their meal, the poor lady was speechless and her husband, the birthday boy, just chuckled at her and said "well, I've never seen that happen before."

It was so great spending some time with them and even better that there wasn't anything going on which is usually why we are together. 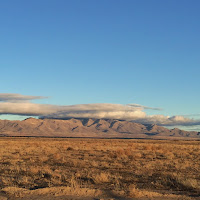 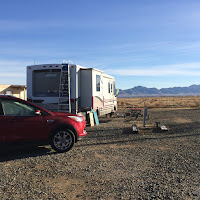 We stayed here back in February 2016 as well. The park is under new ownership now so we did not get our waffles for breakfast or the yummy pies that the previous owner made. The park itself hasn't changed much, although they have big plans for improvements. Sites are pull through, gravel and level. The park is quiet with only occasional road noise. The view out our front window was very nice.
New Year's Eve was a bust for us, Nancy was losing her battle with a cold and was in bed before 10 pm - didn't even make the east coast ball drop. 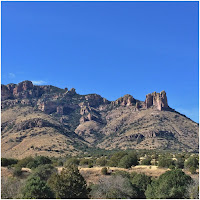 We spent a whole day exploring the Chiricahua Mountains. We drove to the tiny town of Portal which has a general store and cafe, and then came back across the mountains. 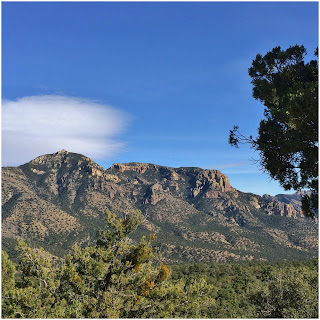 The Visitor Center and entrance to the mountains is in Portal. 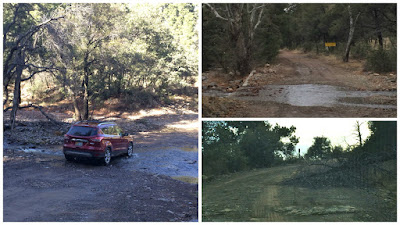 The guy at the center told us the road would be a washboard in places and have some holes and rocks to maneuver around.


He didn't tell us about the running water, fallen trees, narrow one lane sections or the cows.

This trip is not for the faint of heart and there were a few times Nancy thought she would faint! 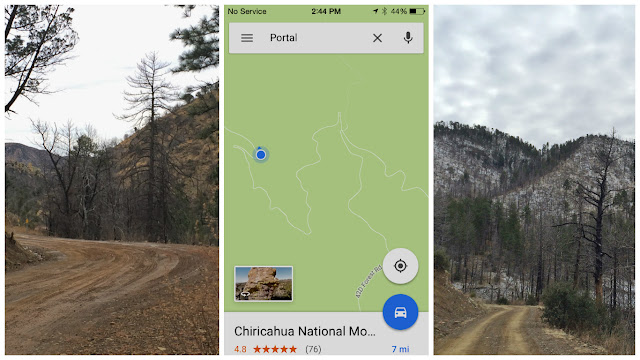 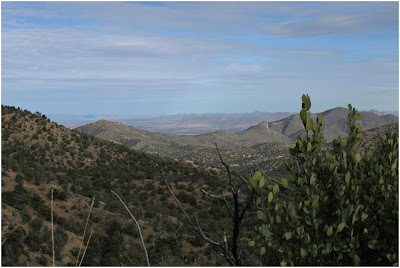 But, the views were so amazing it was worth every breathless moment.
Every twist and every turn gave us something different to see. Some areas we could see a long distance into the valley. Others we could hardly see past the road.

We even saw snow! Yep, and parts of the road were a little on the slushy side. This may have been one of the moments Nancy thought she might faint. 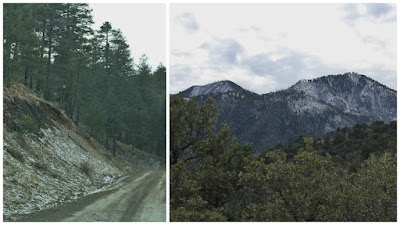 There were so many different types of trees and as always the tree roots amazed us. Such determination to keep growing. 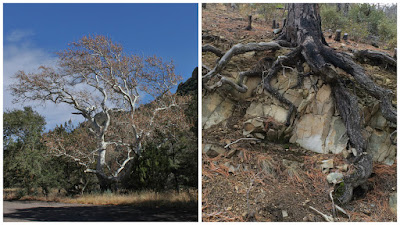 The road ends just at the entrance to the Chiricahua Monument National Park. The last time we were here the road was closed so we were glad we could get to the Massai Point. Absolutely spectacular. 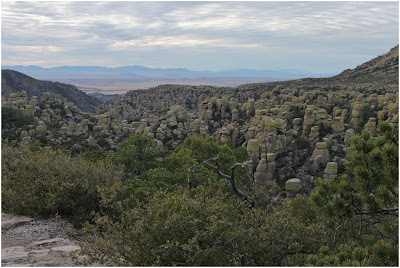 As you walk down the Massai Point Nature Trail you only get a glimpse of what is waiting for you in the clearing of trees. It looks like a huge city of skyscrapers laid out before you.
Then when you think you have seen it all you turn the corner and a whole mountain side of cathedrals greets you. 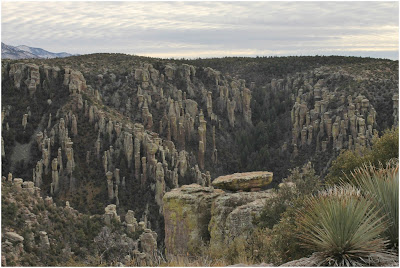 The road to and from the point is just as amazing. The rock formations are just crazy. There is so much to take in that you have to stop along the way and just stare. 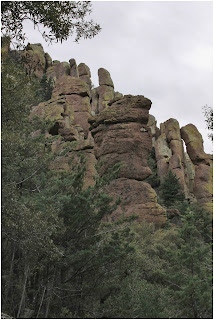 We always see objects and faces in the rocks and it seems other people do too. This one is called the Sea Captain.

The picture in the center is called The Pipe Organ.  The vegetation runs from ponderosa pines and Douglas firs to cactus, depending on the elevation, which the highest is 9,763-feet. This is another place we strongly suggest going to. 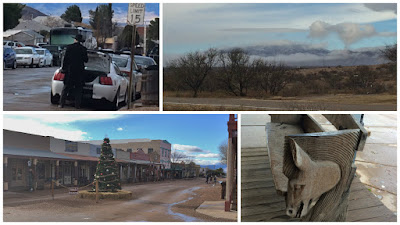 If Old West History is your thing, then you will also want to go to Tombstone. This is our second time visiting here. This time we left the dog home and explored all of the stores and had lunch. As we were wandering around, one of the "gunfighters" crossed the street in front of us to get to his car - we found it very funny that he drives a mustang! 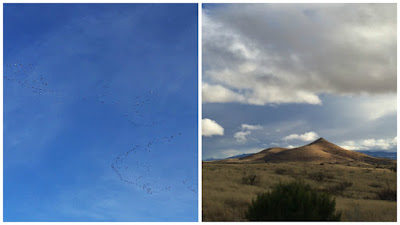 The drive to and from Willcox to Tombstone was so pretty and we seemed to be in the path of migrating geese as thousands filled the skies.


Next up is a one night stop in Las Cruses, NM and then on to Texas.


Happy Trails to You!

Tips and things we have learned along the way.
~ A place for pictures and other fun things. 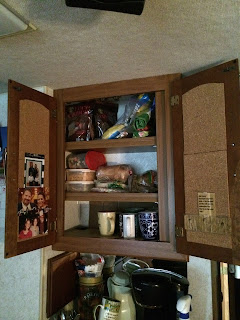 There is almost nothing in the kitchen area that is metal so using magnets is not an option for displaying family photos and such (that will be changing as Nancy got some magnetic paint - watch for that to show up in a later post).
So, we bought some cork board and cut it to fit inside the cabinet doors. Now when we open the doors we get to see family! Need some more pictures though.