California here we come! Yes, Nancy sang this at the top of her lungs on November 15, 2016 as we crossed the river into California. The drive once again treated us to some pretty views. 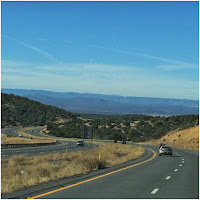 We stayed at The Palms River Resort in Needles, which is just across the boarder and on the Colorado River. 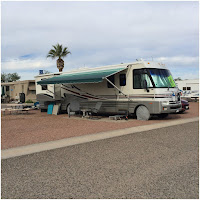 The park is very nice and this was the biggest site we have had. The park is a combination of small homes, trailers and RV's. It is a very active community. They have Taco Tuesday and breakfast every Sunday morning with very tasty biscuits and gravy. Game nights a couple nights a week as well.
There is a pool with two hot tubs, an exercise room, game room and basketball courts. We actually shot some baskets one night. 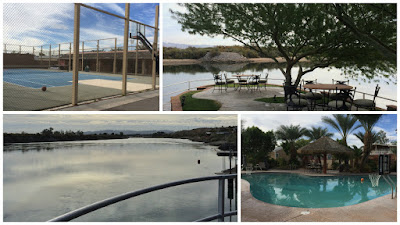 The park is very well maintained and there is a small beach and a nice patio right on the river. WiFi was good and our Verizon signal was strong. We paid $25.46 a night with our Passport America discount.

There is not much in Needles, in fact we were surprised how depressed the area is. 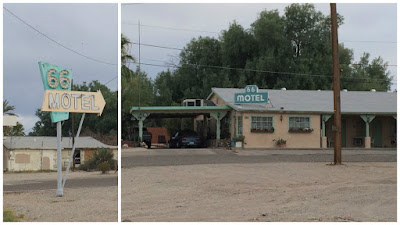 There is a motel left from back in the day and a beautiful Harvey House that is now a railroad depot and office space. The El Garces Hotel was designed by Frances Wilson. It was built in 1908 and closed in 1949. It was refurbished in 2009. The palm trees on the property are pretty amazing. 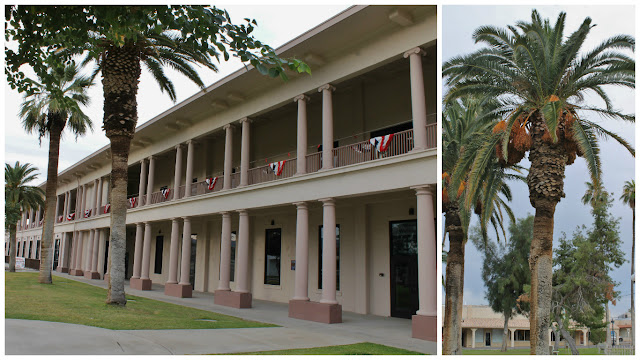 Hoover Dam was a fun outing. We made a stop in Boulder City for a few pictures and what we thought was the Area 52 Coffee Shop. When we got there we discovered it is now a gift shop, fun place to wander but alas no coffee. You are greeted at the door by a rather tall alien who warns you about the area. 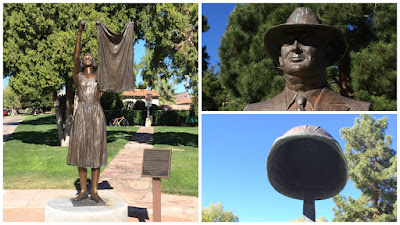 There are a number of metal sculptures in town that commemorate the building of the dam. "Ragtown Goddess" depicts the struggle and strength of the workers and their families. Most lived in tents as there was no housing available.
The bust is of Frank Crowe, the chief engineer of the dam. The hard hat made its debut at the building of the dam - where the motto was "safety first". 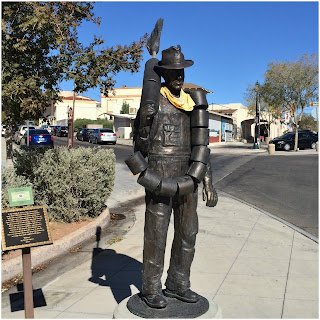 Alabam, the toilet paper hero of the dam, was a Hoover Dam worker who cleaned and restocked the outhouses. This statue shows him as he often looked in life, with rolls of toilet paper draped over his shoulder.

As you approach Hoover Dam from Boulder City you get glimpses of Lake Mead and then the entire lake comes into view. There is an overlook where you can see the lake and surrounding valley. 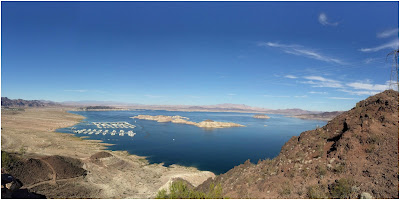 The enormity of the Hoover Dam is insane. Really can't wrap your brain around it, but it changed the surrounding desert forever. The construction of this massive project took just 5 years to complete. Built during the Depression, thousand of people came to this desolate area for work. While safety first was the motto there were still accidents and deaths. It is hard to know the exact number of people who died during the construction because the differing counts include family members, and deaths that were not directly related to the construction, but it seems the number is around 100.
There have always been rumors of bodies buried in the concrete but they say that is false, due to the way the concrete was poured there was only 1 to 6-inches of wet concrete being poured at a time. So no one could have been buried in it. 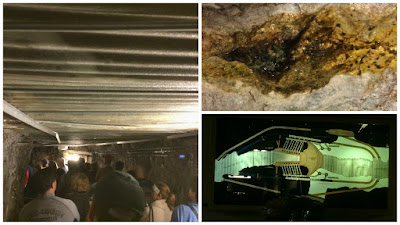 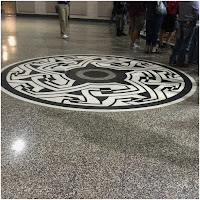 They offer two tours, one that takes you all over the dam inside and out and a short tour that takes you to one section of the dam. We took the short tour as there was a 2-hour wait for the full length tour. This tour takes you down a few levels in a small elevator to a mass of hallways that lead you to the generator room. You can see places where water has seeped in.  The rooms are actually very pretty with elaborate tile work. 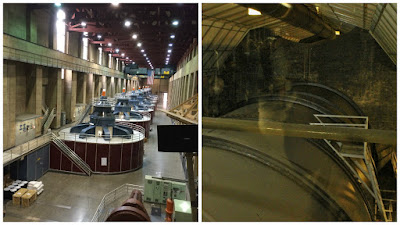 Once we were done with the tour we wandered on our own. They have an information room that takes you through the history of the dam with pictures, videos and displays. It was quite interesting.

There is an observation deck that gives you wonderful views of the dam, river and the bridge that crosses the river. You can walk out on the bridge for an even better view of the dam, but of course you all know that Nancy had no desire to do so. The electrical poles, which are enormous are tilted so that the wires won't touch the sides of the canyon. 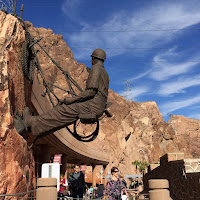 A larger-than-life bronze sculpture of a man scaling a rock wall greets you as you leave the parking structure.  It represents a "high-scaler" and was created in the 90's by sculptor Steven Liguori. It was based on a photo of one of the high-scalers still alive at the time, Joe Kine. Wouldn't it be wonderful to hear his stories! These men would dangle hundreds of feet in the air, armed with jackhammers and dynamite. One of the more dangerous jobs on site.
The "Winged Figures of the Republic" are on the Nevada side of the dam outside the original Visitor Center. Their wings are close to 30-feet tall and there has always been a debate as to whether they are angels or demons. Sculptor, Oskar Hanson used more than 4-tons of bronze to create them. They have weathered to a green patina, except the toes which have been rubbed by countless people for good luck. 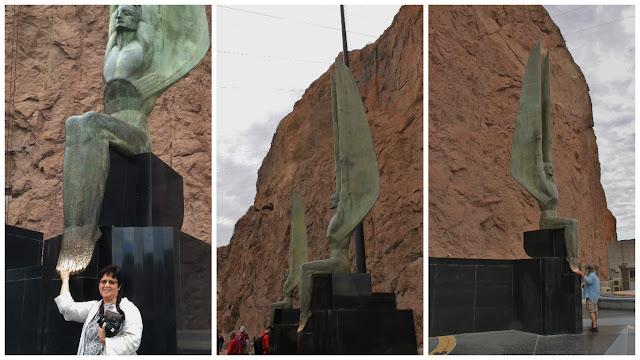 They are surrounded by a terrazzo floor with a celestial chart that shows the exact position of key stars on the day the Hoover Dam was dedicated by President Franklin Roosevelt on September 30, 1935. In front of the star chart are the emblems of each state that was effected by the dam. 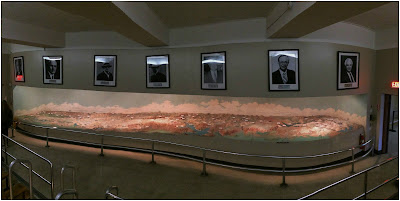 The original Visitor Center is a small building that at the time was considered spectacular but now is just a shadow of the new one. There is a diorama of the entire length of the river and surroundings cities and states, might be old school but still pretty cool to see.
You can walk across the dam which gives nice views to both sides. 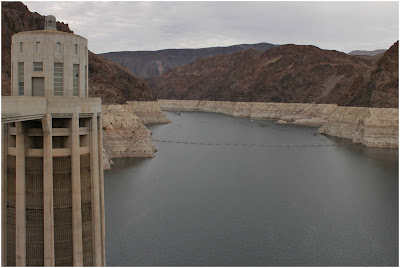 While heading back home we stopped at Hemenway Park, in Boulder City to see the mountain goats that come down from the mountains during the day. It was interesting watching the interaction between the goats and the people. Both are so used to the other being there they just ignore each other. You could certainly tell who the tourists were compared to the locals.

An amazing sunset finished off the day for us. 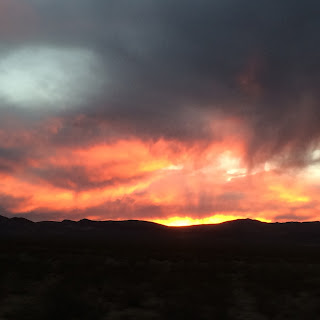 We headed both east to Kingman, AZ and west to Ludlow, CA on Route 66, but to keep this blog post from being even more ridiculously long we will share the details of that from the next blog where we finished Route 66 in Santa Monica, CA. So next up will be Lake Elsinore.

Happy Trails to You!!

Tips and things we have learned along the way
~ Watch your head! 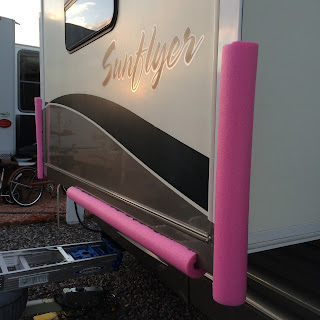 After hitting our head numerous times on the very sharp and hard edges of the slide out we got smart - yes it does take some time for that to happen. We now cover the edges with a pool noodle cut to slide on. Pink is not our favorite color but when you try to buy pool noodles in the winter you take what you can get. No more bruised and cut heads!