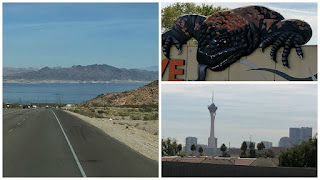 The drive on October 17, 2017 to Kingman, AZ took us through Las Vegas and past Lake Mead. We could see the "strip" off in the distance and this crazy creature was climbing over the wall of the expressway.
This was another two night stop where we didn't unhook the car. In fact all of the next stops will be short stays. Our mission was to get to Louisville by the weekend before Thanksgiving, we will leave the RV and the dog with family there while we drive the car to Michigan to spend Thanksgiving with Katrina and Steve. More on that from Cottonwood. 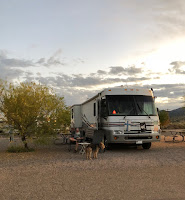 In January, we explored Kingman while driving Route 66 so there really wasn't much we hadn't seen. We stayed at the Blake Ranch RV Park. There are around 50 sites, a mix of back-in and pull-thru. 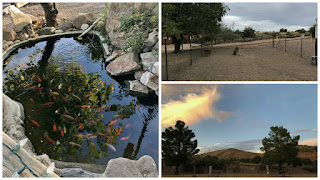 Our site was a pull-thru with full hook-ups, plenty long enough and very level. Laundry room and bathrooms were very clean, WiFi was spotty. There are two large dog parks and the park is well maintained. 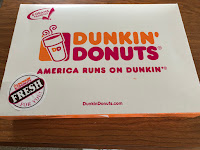 They have a pretty gold fish pond in front of the office. The view from our site was very nice. We celebrated Les's birthday here with one of his favorite things - Dunkin Donuts was just a short walk away! 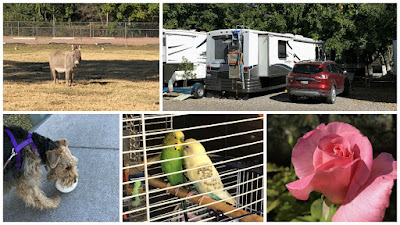 This was an interesting stop. Turquoise Triangle RV Park was the first surprise. We arrived here on October 19, 2017 and we knew when the driveway was barely wide enough to pull into that we were in for a treat. We were greeted by two love birds when we checked in. This is small park, with about 90% of it full time residents. The few spots that are for over-nighters are very narrow buddy sites and very short. The RV just barely fit into the spot. Pretty sure the lady parked in front of us thought we were going to hit her RV! We had to maneuver the tow-dolly along one side of the RV and park the car on the other side. Luckily the people next to us were never there because we would not have been able to park two cars. The site was not level and the sewer hook up was broken. They did come and fix that right away. The WiFi didn't work. We paid $35 a night for all of this fun. Morning dog walks took place off site as there was nowhere on site to walk her, we met a donkey and found a ball that we brought home with us. 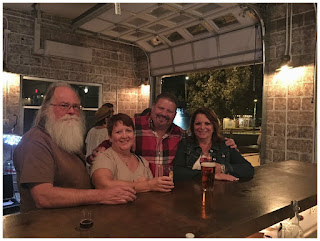 Cottonwood is about 20 minutes south of Sedona and we got to explore it with Chuck and Gina (Nancy's nephew and his wife).
There are a number of shops and art galleries along with restaurants and watering holes. We made a valiant attempt to hit them all. Les got to celebrate his birthday again. 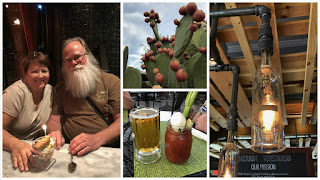 Chuck and Gina had to head back to Phoenix after breakfast on Saturday and our plan was to go to Sedona but we ended up in the local emergency room instead. Let's start with we are both fine. Les had not been feeling "just right" for a few days and Saturday was the worst. Short of breath and pressure and burning in his chest. We were trying to decide if we should head to Prescott to go to the VA Hospital (hour and a half away) when the pains in his chest started getting worse and going into his arm. So off to ER we went. He did not have a heart attack - thank God. They are not really sure what was going on, his blood pressure was through the roof. They wanted him to stay so he could see a cardiologist, but agreed that going to the VA was okay. They supplied us with copies of all of the test results and we mailed them off to his doctor in Asheville. After talking with him we decided to stick to our plan and head to Louisville, shortening each stop to just two nights so we would arrive by the 10th. Les will go to the VA Hospital in Louisville to have additional tests run. He still tires very quickly but no additional severe chest pains. 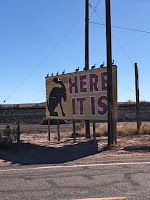 On our drive to St Johns on October 23, we made a stop at the Jack Rabbit Trading Post, in Joseph City, AZ.  Nancy collects pins to put on her canvas art bag and we had bought a Jack Rabbit pin that looks like their sign on our last stop here. She lost it somewhere in Alaska so we stopped to get another one. Also while getting gas we had to chuckle at the perfect placement of these two trucks. 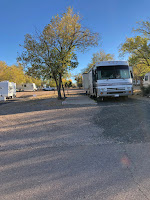 We do find ourselves in some pretty small places and St Johns is one of them. We stayed at the Moon Meadows RV Park. This park has seen better days, but for two nights it wasn't bad. There are a number of sites, most empty, some with full time residents. There is a mix of pull-through and back-in. We had a long pull-thru with full hook-ups. WiFi was poor but our Verizon signal was strong. We paid $20 a night with no discounts. We did have to unhook the car here as we needed to mail the test results from the hospital to Les's doctor and there were unauthorized charges on our debit card so we needed to fax papers to the bank. One really nice thing about small towns is you can always find a great breakfast place. Tlc's Family Kitchen is the one in this town. 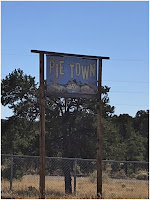 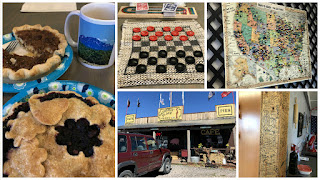 The drive on October 25 took us through Pie Town, NM. There is not much here except the Gatherin' Place Cafe that serves delicious pies. Of course we had to stop and try them. Pecan custard for Les and Blueberry for Nancy. 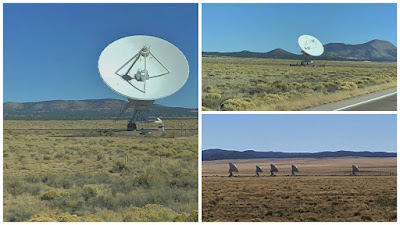 As we drove down Hwy 60 we could see the large satellite dishes  from the Very Large Array, The National Radio Astronomy Observatory. They are so big you could see them from miles away. 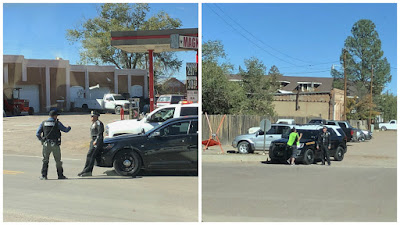 Then we had to take a detour from the highway in Magdalena as there appeared to be something going on downtown. The police had the road blocked and cars stationed along the detour.

After all of that we arrived in San Antonio, NM, not to be confused with the one in Texas. This one is a very small town with a bar, general store and produce stand. 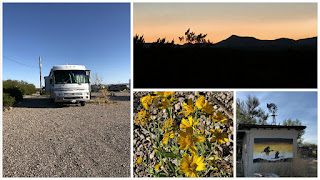 Bosque Birdwatchers RV Park was home for two nights. It is just outside of the Bosque del Apache National Wildlife Refuge  and if it wasn't for the loud train it would have been very quiet here. There are around 20 sites, all gravel and a mix of 30 and 50 amp electric. We were in Site 15, it was level and plenty long enough for the RV, tow-dolly and parking the car. We had full hookups, there is no WiFi and no laundry. There was lots of open space to let Mielikki run off lead. We paid $25 a night with no discounts. 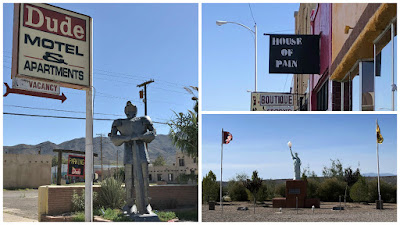 Truth or Consequences was just south of us so off we went. There is not much here to see but we love the name. A Knight in Shinning Armor greets guests at the Dude Motel and the Statue of Liberty stands guard at the Veteran's Memorial. We were not brave enough to venture into the House of Pain! 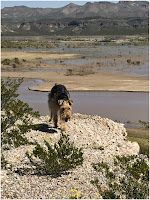 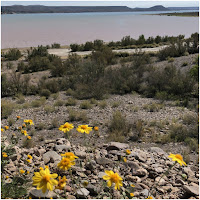 Elephant Butte State Park is just north of Truth or Consequences and we did enjoy our stop there. It is the largest state park in New Mexico. You can boat, fish and hike here. With Les not quite up to speed we enjoyed the views from one of the overlooks. 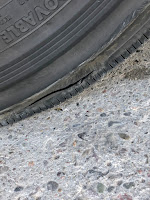 Our departure was delayed a few hours due to needing a new tire. Les discovered a crack in the front passenger tire while doing his drive day check of the outside of the RV.  Luckily, Socorro Tires in Socorro, just 15-minutes away had the tire we needed in stock. Once that was in place we hit the road. 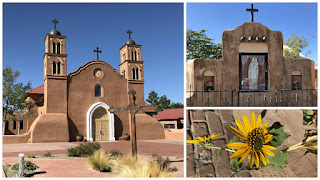 While waiting on the repair, Nancy and Mielikki explored the area and came across
this beautiful Mission church. 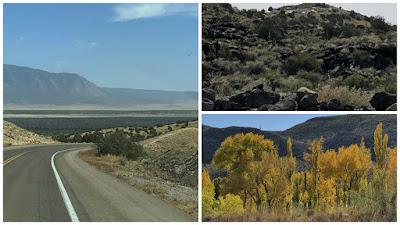 The drive on October 27, took us through a variety of scenery. Rolling hills, volcanic rock and a little bit of fall color.
This was our second time visiting the Aliens. In February 2016 we stayed here for a week. 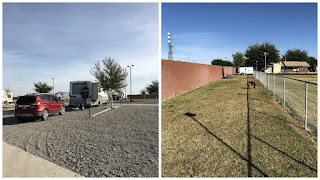 This time we stayed at the Town and Country RV Park. Large park and very well maintained. The back section, where we were is all gravel. The sites are long but on the narrow side. We had full-hooks and the WiFi actually worked. Nancy was so happy to be able to start getting caught up on the blog posts. They have a nice dog park, a pool and a clubhouse. 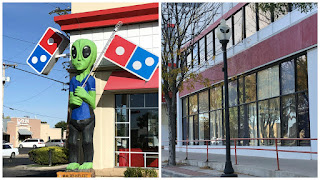 We did a little shopping in town, and once again somewhat disappointed in the lack of Alien stuff. Snapped a picture of a little green man, and we loved the "eyes" on the lamp shades.

Up next is Texas.

Tips and things we have learned along the way.
~ Be prepared
In a previous post we talked about Nancy's notebook that she keeps all of the campground information in as well as sights we want to see in the area. Her recommendation also included listing all of the local emergency information. Hospitals, both VA and regular, Urgent Care, and Veterinarians so if there should be an emergency we are prepared. Well, over the course of time we have gotten a little lazy about this and at the stop in Cottonwood we did not have this information and it would have saved some frustration and a few minutes of time. Lesson learned!