You may have heard the big sigh of relief from Nancy as we pulled into our campground in Clarksville, IN on November 10, 2017. It had been a long 20 days of worry since Les was in the ER in Cottonwood, AZ. More on the hospital visit in a moment.

While our family is in Mt. Washington, KY and the VA Hospital is in Louisville, KY our RV park was in Clarksville, IN. It was the closet park to the hospital, only about 15 minutes. 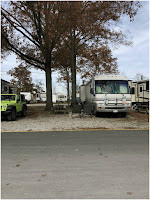 Add-More RV Park was home for almost a month. It is conveniently located close to all shopping, but far enough that it is pretty quiet.
The park is well maintained. The sites are narrow but long enough for the RV and tow-dolly.
The laundry room was adequate. WiFi was spotty and our Verizon signal was good. We paid $19.79 a day with the monthly discount. 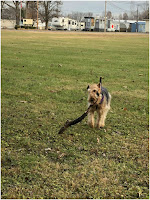 There are large open fields for walking the dog and for a little off lead running. Mielikki of course can always find a stick, or in this case a branch!

There were a few mornings that the temps got down into the high 20's which left everything covered in frost. 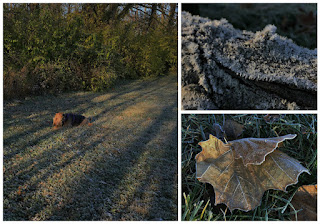 It was a bit cold, not that Mielikki noticed, but it did make for some great picture opportunities. 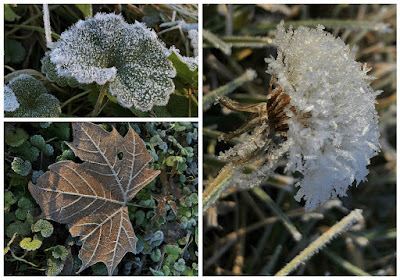 On Sunday, November 12, Les went into the ER of the Louisville VA Hospital. Because he is not assigned to this hospital he had to go through the ER. It didn't take long once he was checked in for the Dr's here to know he had suffered a heart attack in Cottonwood, AZ. They could tell as soon as they looked at the EKG results that the hospital there gave us. Imagine our surprise, as we had been told he didn't have a heart attack! So very thankful we made it all the way here without any additional problems - and that includes while he changed a flat tire along the way. Pretty sure his guardian angels were working overtime.
We could not have been more impressed with the staff at the Robley Rex VA Medical Center. Other than the intake person in the ER (Nancy really wanted to punch her), everyone from the janitors to the head of the cardiology department was fabulous. On Monday, Les underwent a heart cauterization which is when they discovered that one artery was 100% blocked and two others were around 40%. They placed a stint in the 100% blocked artery. 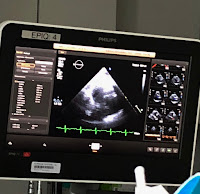 Tuesday, after a heart ultrasound was done and approved he was released, and the difference is like night and day. He feels so great and we are so grateful that he did not require by-pass surgery. He had a follow up appointment on Friday, December 1 and got the all clear to continue traveling, with a follow up appointment when we hit Asheville in the Spring. A huge thank you to everyone who was praying for him.

After the Dr's appointment on the 1st we went in search of Roadside Oddities. In Louisville we found the Louisville Water Tower. It was built in 1860 and is the oldest ornamental water tower in the world.

The Colgate Clock, on top of the former Colgate-Palmolive factory in Clarksville, IN is one of the largest clocks in the world with a diameter of 40-feet. The Santa Pot Guy stands on a corner in Jeffersonville, IN.

At Couch's Body Shop we found a Cadillac planted nose down into the ground. The maniquin that sits on top changes with the seasons and holidays. Pretty sure it wasn't 106 out that day! The metal lady is titled "I am Your Mother" and the Scale balances love. 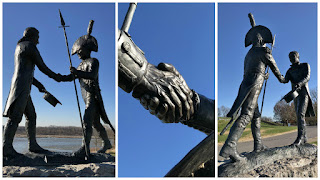 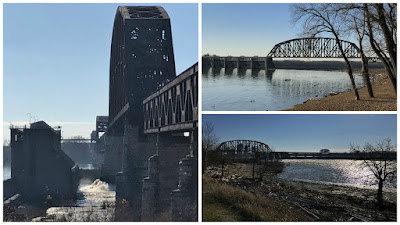 There is an interpretive center and the area is very popular for fishing, hiking and bird watching.

Right down the road from the Falls of Ohio we found the cutest coffee shop, The Widows Brew. Our niece Jennifer did point out that due to the name it was an interesting choice for our celebratory coffee and muffin after Les getting the all clear. The building is a beautiful painted lady and there is a great view of downtown Louisville. 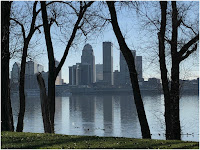 In downtown Jeffersonville, we found Thomas Jefferson celebrating the holidays, and we loved the painted electrical box.

With the Dr's approval we continued with our plan to go to Michigan to spend Thanksgiving with Katrina and Steve. We were there from November 19-26th, leaving the RV in Indiana and driving the car. 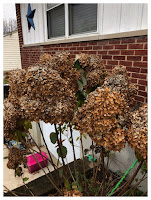 On the drive there we stopped in Alexandria, KY and had lunch with Lillian (our niece) and Larry. It is always great to be with them, we got to see their new house too! Didn't get pictures of them but did get some of Lillian's hydrangea bush - the biggest one we have ever seen.

Thanksgiving has always been our favorite holiday and once upon a time it was the whole family spending the day together. There were many years when we were feeding 40 or 50 people. Over the years the numbers have dwindled but not our love for the holiday. Family and food - what more could you ask for? 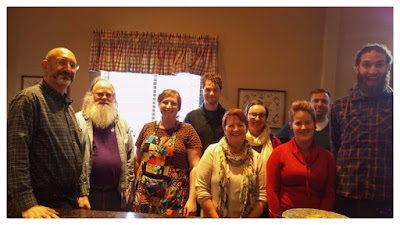 We were fortunate this year to spend it with the Fox family. Mike and Anne, Steve's parents, opened their home to all of us. What a wonderful day. Amazing food, great company and lots and lots of laughs while we played Telestrations. 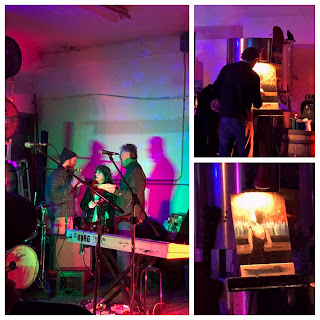 The week went by so fast. Les enjoyed lunch and breakfast with past co-workers, always great catching up with them. We had a blast with Katrina and Steve going to their favorite places. We enjoyed both the hard cider and the music of Social Bones at the Northville Winery. Nancy's favorite part may have been watching the artist.


Nancy brought along a bottle of wine from her nephew Chuck to share - it seems Katrina and Steve liked it. 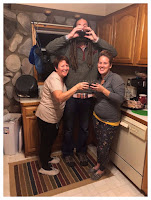 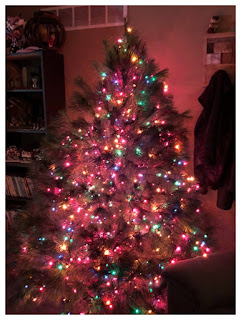 What fun it was helping them pick out their Christmas tree and we got to celebrate Christmas with them before we left. 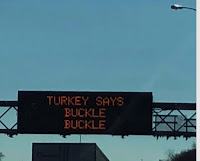 We always get a kick out of the sayings we see on the electronic signs - this one was in Cincinnati on our way back to Louisville.

While we spent the week in Michigan, Mielikki spent the week with Sherrie, Eric and Lilly. We weren't sure she was going to want to ever leave.
The night we left her she never whined, but the next morning when Eric left for work she was pretty devastated! Once again it was so nice not having to worry about her while we were gone, we knew she was getting plenty of love.


Eric and Sherrie showed us around Jeffersonville.


The Schimpff's Candy Store was a dangerous place and became a favorite while we were here. 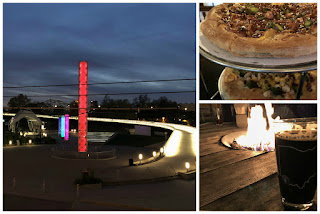 We also enjoyed delicious pizza for dinner at the Parlour and then relaxed with a beer by the fire at their brew pub. You get a nice view of the walking bridge that takes you to the Louisville side of the river.

Nancy and Sherrie were able to spend a couple of days just hanging out, something they rarely get to do. Craft shows, boutique shops, finding crazy things at the store, and breweries were some of the things they did. Of course they played numerous games of Upwords. 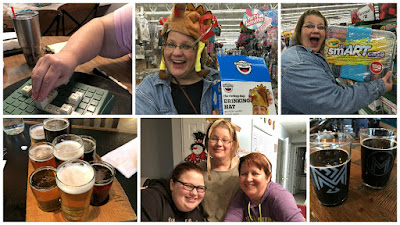 Lilly got some early Christmas presents and of course we had to wear the ribbons! 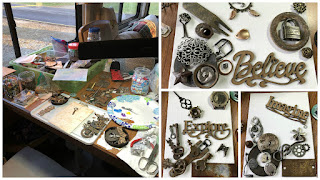 Nancy got a number of art days in on this stay, which always makes her happy. Plus, she took all of her "junk" (if you look close at the pictures you will see it really is junk!) to Sherries and they enjoyed an art day together.


Next up we start our travels to Florida with four stops along the way.

Tips and things we have learned along the way.
~ A while back one of our tips was suggesting that when making reservations at a campground you ask about the best way to get into the park. Many times GPS will take you on a route that is not the best for an RV - especially one with a tow-dolly.
Well, we want to extend that suggestion to ask whereever you may be taking the RV. A repair shop, propane station etc.
While in Clarksville we needed our propane tank filled. This means we have to pack up everything and drive the RV to the propane dealer. There was one not far from the campground so off we went. Unfortunately, when we talked to them to make sure they had propane. Another tip - don't assume they have it available as sometimes they are out, and sometimes the person who can pump it is not in.
Back to this tip - our GPS took us down a road that had an overpass that only had a 10' clearance. We are close to 13' tall - so you can see where the problem was. Luckily we did not have the tow dolly attached, and there was a driveway right behind us, so we were able to back up and turn around. The propane place was just on the other side of the bridge so it made sense to come this way - if you were in a car. If the tow-dolly and car had been attached this would have not been such an easy fix. Once again lesson learned.
Posted by Nancy B at 6:16 AM