Georgia and South Carolina - 2 stops in each

Damn it's cold! We would feel even worse about leaving Florida and having cold weather if it wasn't for the fact that Florida is freezing as well. Rain, sleet, snow, and some sunshine, we have had it all. 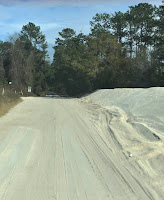 We left the "Sunshine State" on a cloudy chilly Wednesday. The back road we took out of Silver Springs went through a sand plant. We were a little confused at first and thought we had hit a dead end but thankfully it was just a short drive through sand until you hit pavement again.
This was on December 27, 2017 and Brunswick, GA was our destination. Golden Isles RV Park was home, it is a large park with over 140 sites. Some are permanent residents, most are well kept up. There is also an area for tent and a few cabins. 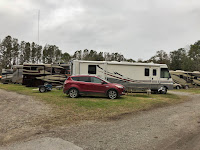 The sites are grass and level. We were in #42, an end site which gave us a little bit more room. It has full hook-ups and a picnic table. The RV with tow-dolly attached just fit in the site but there was room to park the car. The WiFi worked on our phones and tablets but we could not connect on our laptops. Verizon signal was low. We paid $31.00 a night with our Passport America discount. 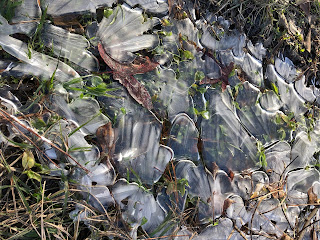 There was a service road that was perfect for dog walking, but a few mornings were a little chilly and icy. We spent New Years Eve here and it was quite loud with gun shots and large fireworks until 1:00 am, Mielikki was not a fan. 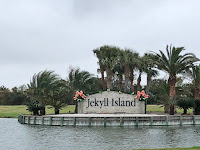 The park is about 15 minutes from Jekyll Island. What a cool place. There is a lot of history here, with a section of old hotels and shops left over from the exclusive resorts of days gone by.
Archaeological digs suggest that the island has been inhabited for more than 3,500 years and a popular hunting ground for Native Americans. In the 1500's French explorers arrived. In 1733, General James Oglethorpe founded the colony of Georgia and named the island after Sir Joseph Jekyll, his financier from England. In 1735, Major William Horton created a plantation that provided food for the soldiers at Fort Frederica. The house was constructed out of Tabby, a material composed of equal parts of sand, lime, oyster shells and water. It was mixed into a mortar and poured into forms. 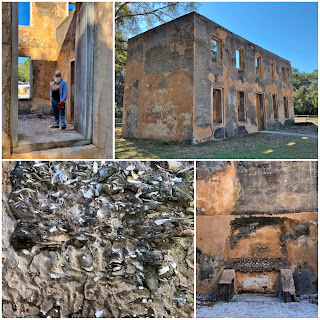 In 1742 as the Spanish Army retreated they burned the entire plantation down, both buildings and fields and confiscated the animals. Many battles were won and lost on the island. 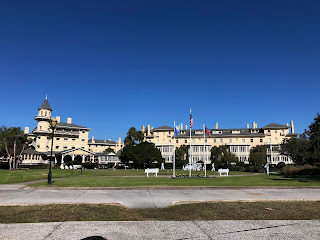 The DuBignon family from France held property on the island from the late 1700's until the late 1800's when it was purchased by the Jekyll Island Club and turned into a very exclusive resort. The Rockefellers, Vanderbilts and Pulitzers were among the rich and famous guests.

The forerunner of the Federal Reserve was created here and the first transcontinental telephone call in the US was made here. Presiding over the ceremonies by telephone were President Woodrow Wilson, in DC, Alexander Graham Bell in New York, Thomas Watson in San Francisco, Henry Higginson in Boston and AT&T President Theodore Newton Vail on Jekyll Island. We missed seeing the monument so borrowed a photo from the internet.
In 1947 the state purchased the island from the club and in 1948 it was opened to the public as a State Park. Access to the island at the time was across a drawbridge. Today a paved road takes you into the five beaches, the campground, hotels, and cabins. There are plenty of places to eat and shop and you can visit the turtles at the Georgia Sea Turtle Center. There are also a number of permanent residents on the island.

The shops in the resort area are filled with lots of local art which we always love. Our walk out to the wharf was at low tide and we had to chuckle at the boats sitting in the muck - hope no one wanted to go out in them. 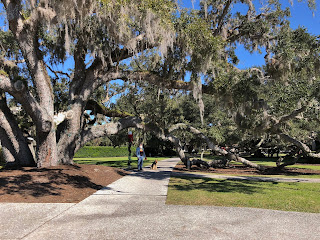 The trees are pretty amazing with their trunks stretching out across the ground and replanting themselves. It is like a giant octopus crawling across the land. 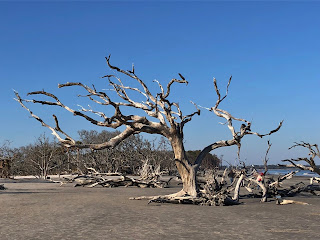 Driftwood Beach was by far our favorite. Your senses are overwhelmed by the full sized driftwood trees that line the beach. Some look like they were planted in their spots while others appear to have been tossed about before coming to rest. 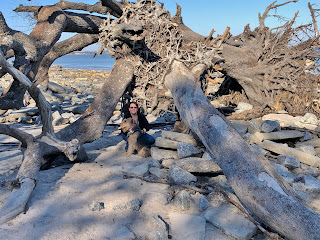 It is the most amazing sight to see. People were climbing on the trees, while others were finding a cozy spot to sit and watch the boats go by. 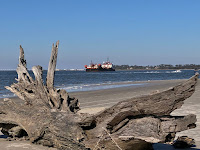 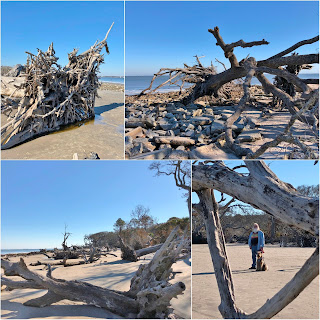 There are many perfect spots to hang a hammock for a little nap or reading time. Nancy took over 200 pictures on this beach alone. 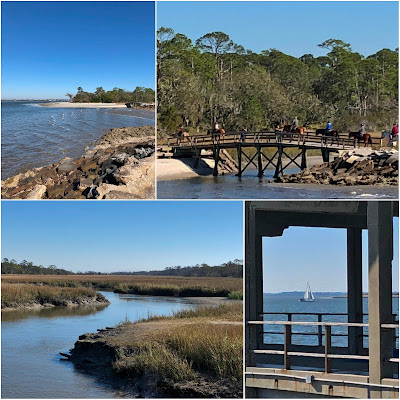 There were a ton of people on the Clam Creek Fishing Pier and beach but that didn't seem to bother the horses one single bit.


Brunswick is a cute town, to get there from the island you cross over the Sidney Lanier Bridge. It can be seen for miles due to its great height and while driving over it you can see for miles across the French Bluff Creek out into the ocean. 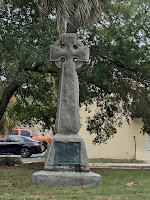 There are a number of small parks with benches and landscaping throughout downtown, one has a beautiful Celtic Cross. 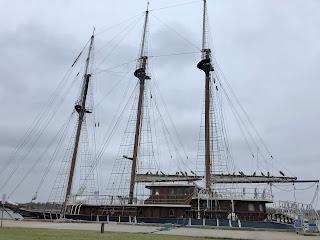 We found a Pirate Ship for sale, or what we thought of as a pirate ship. No, we are not planning on becoming pirates, but it is a fun thought. 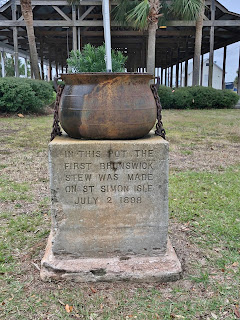 This Brunswick Stew Pot, is claimed to be the pot the first Brunswick Stew was made in on St Simon Isle on July 2, 1898. The original recipe probably called for squirrel, but the link will take you to a recipe that has chicken and/or pork in it. Just outside of downtown you will find every store you could want for shopping.

Our favorite sign of this trip sits outside the Me and My  Partner Antique Store in Woodbine and as you can tell the store was closed when we got there - or as they say shut!

St. Simons Island is just across the St. Simons Sound from Jekyll Island and is much more developed. The downtown area offers lots of places to eat along with an eclectic assortment of shops. 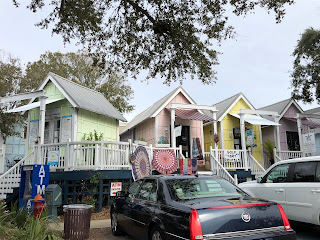 One section is tiny little "houses". They sit on a raised platform and each one is a different vendor. They really are adorable. You can't visit St. Simons Island without going to the lighthouse. The 3rd order Fresnel lens made in France has been guiding mariners into St. Simons Sound since 1872 when the lighthouse and keeper's dwelling were constructed. They replaced the original ones that were destroyed during the Civil War. Fort St. Simons and Fort Frederica were close by and used to protect the British troops in Charleston and Savannah from the Spanish Army. 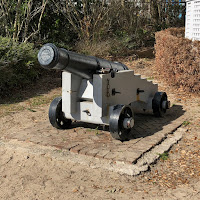 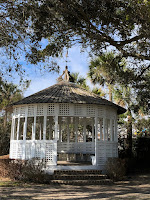 The Gazebo was once the ornamental cover for a water tank at the summer cottage of shipping magnate F.D.M. Strachan around 1910. It was moved here in 1989. The Cannon was forged around 1800 and is the type used by the U.S. Navy in the War of 1812. 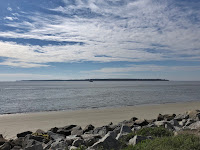 There is a lovely boardwalk along the water from which you can walk down onto the beach or just sit and relax while the kids play at the playground. You can see Jekyll Island from here. 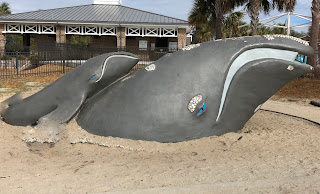 We found a Momma Whale and her baby, which is a popular climbing structure for the kids. 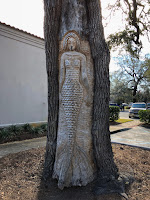 There are a number of Tree Spirits around the Island but unfortunately the Visitor Center where you can get a map was closed so the only we saw was in their parking lot. 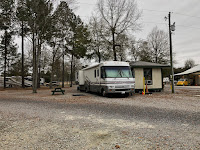 A one night stop over in St. George on January 2, 2018 broke up the drive to Greenville, SC. We stayed at the Jolly Acres Camp and Storage. It is a fairly small park, well maintained and really quiet. They have a fishing pond and some hiking trails but with all of the rain it was a little muddy so we didn't explore them. 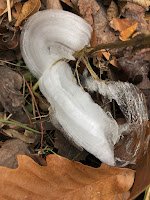 Plus, it was pretty cold, the weeds were frozen solid and looked a bit like Styrofoam.
Our site was a gravel pull through with only water and electric hook-ups. The WiFi was good and our Verizon signal was strong. We paid $35.95 with our Good Sam discount.

Greenville and Asheville, NC are what brought us north. We arrived at the Springwood RV Park on January 3, 2018. It is a combination RV park and mobile homes, but they are slowly getting rid of the mobile homes and making all the sites into RV sites. 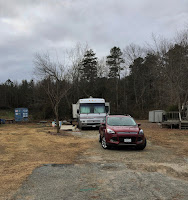 We were in Site #19 which was a back in with full hook-ups. Because Greenville was caught up in the across the country cold snap we had some issues with frozen water pipes - the campgrounds not ours. The maintenance guy was wonderful and johnny on the spot to fix things for us. The WiFi was a bit spotty and our Verizon signal was fair. There is a train track that runs through the middle of the park, but we only heard a few trains a day and the latest one was at 9 pm.
Our timing was perfect as the Greenville RV Show was happening while we were here, so we got to attend and do a little dreaming of an upgrade. We also had some work done on the RV, we finally found someone to put the heater core back in, so we now have heat while we drive. Sure missed it the past few weeks as the temps dropped into the 40's inside the RV while driving.
Nancy made a trip up to Asheville to see the eye doctor. She got the all clear, he ruled out anything serious that could be causing her blurry vision and believes it is because her left eye prescription has changed and her right eye has stayed the same. So her eyes are working harder to focus. So a new pair of glasses should fix things right up.
She stayed with our friend Janet which was great fun.

They visited a few of the new breweries that have opened since our last visit, ate some delicious food, drank good coffee and had lots of laughs. It was a much needed Asheville fix and should hold Nancy over till we get back in the Spring. 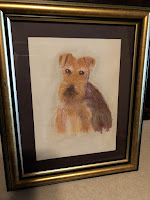 One morning while walking the dog a neighbor stopped Nancy and asked if his wife could take a picture of Mielikki. She draws animals and had never done an Airedale. So they chatted while she was taking the picture and found they had a great deal in common. Nancy left Janet one of her painted rocks before heading to Asheville and Janet drew this wonderful picture of Mielikki for us. This is one of the best things about our travels - meeting and connecting with new people. 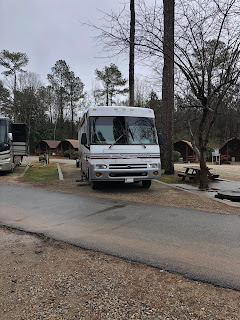 Another one night stop on our way to Alabama. We stayed at the Atlanta South RV Resort. A large park right off of I-75.  There is some road noise and a number of the sites are pretty close together. They have a pond, a pool and rec room along with onsite laundry which was very clean. WiFi was spotty and our Verizon signal was good. We paid $36.00 a night with our Good Sam Discount.

Next up is Alabama.


Tips and things we have learned along the way.
~ More toys. 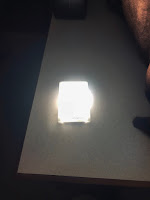 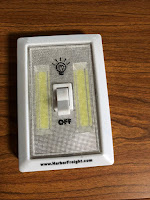 Going into Harbor Freight is a very dangerous activity. On this stop we found a really cool light switch/flashlight combo. It has a sticky back so you can put it anywhere inside or out. The light is extremely bright so it will light up even the darkest cubbyhole or closet.
Posted by Nancy B at 7:37 AM