December 14, 2017 is the day we arrived in Florida. Cottondale is in the panhandle so we still had a few chilly nights in the 30's but no snow and warmer days. 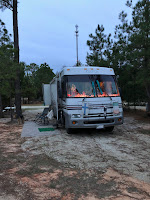 The Hitchin' Post Corral and Campground was home for a week. This is the second time we have stayed here. The first was back in June 2016 when we came to Florida for a family wedding. That blog post has lots of pictures of hikes and family. This stop was not quite as busy but we did have some fun. We love this campground, the owners are amazing and have done so much work on the place. 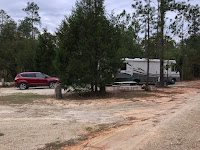 We were in Site # 8 which is a pull through end site that is fairly private. The campground has plenty to do - lawn bowling, ladder-ball, horseshoes, volleyball and a golf practice net. With two fenced dog parks there is always a place to play. The large field with a maze cut into the weeds and wildflowers allowed Nancy and Mielikki to get their mile walk in every morning and a couple of runs too. 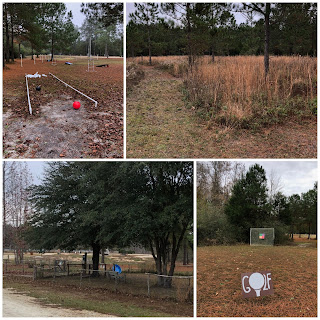 Some of the mornings were a little chilly but they offered some great morning dew picture opportunities. 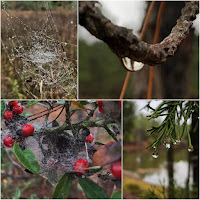 The lake is stocked and ready for you to go fishing, or you can enjoy a cruise around the lake in the paddle boat. There are signs warning of poisonous snakes so swimming is probably not a good idea. But it is a pretty spot to sit and relax, especially after a run on a humid morning. It took a number of attempts to get Mielikki to pose for these pictures.

A beautiful fairy garden and two white rabbits greet you when you arrive. Nancy painted a couple of rocks for them to add to their collection. 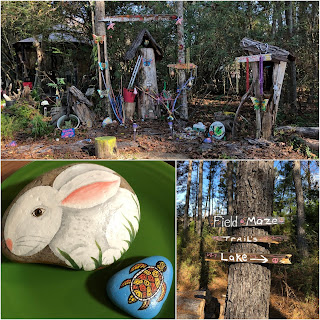 WiFi was good, Verizon signal strong (there is a tower on site). We paid $25.00 a night with our Passport America discount. We can't wait to go back.
We finished our Christmas decorating while here - it's a lot of work decorating these giant trees!

We did go back to the Falling Waters State Park, which is where the tallest waterfall in Florida is. If you are like us you didn't even know Florida had waterfalls.
It is a nice hike through the woods from the waterfall to the lake, where you can swim with the alligators. Oh wait, according to the sign at the beach you are not supposed to swim with the gators - ya think?! But, they do have a roped off swimming area, pretty sure the alligators never think to cross it. 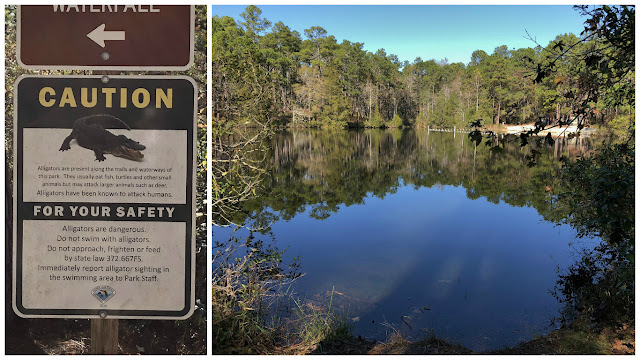 Along the way you pass what was once the county road, there is somewhat of a path left through the trees. We continued our hike past the beach and into the campground where we discovered some Michigan connections. We found bark shaped like the mitten (plus one that looks like a face) and the camp hosts are from Lansing! Unfortunately they were not around so we didn't get a chance to talk to them. As with just about every hike we take there are always stairs to climb. 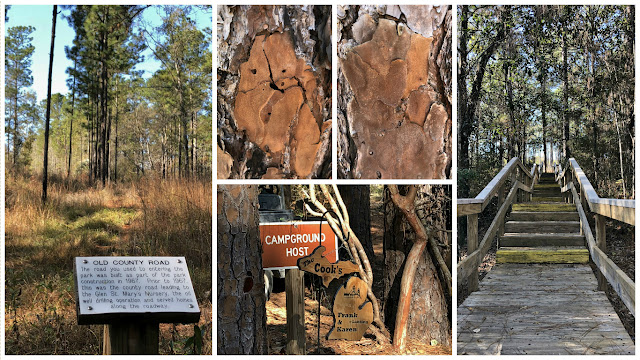 They have "picture posts" where you take a picture from eight different angles and then you can share the photos on their website. This is a project from the University of New Hampshire, which we love because it is where our daughter Katrina went for her master's degree. 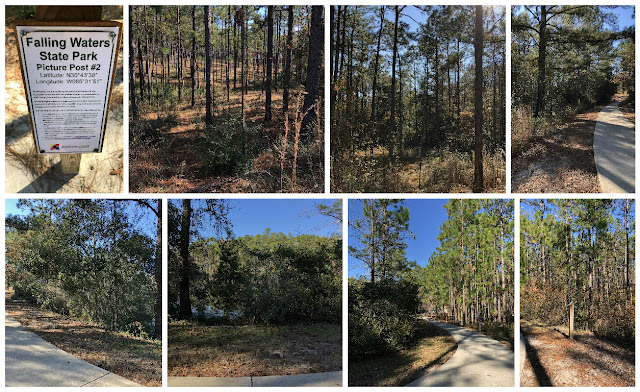 On our way back to the campground we could see this large smoke cloud so of course we had to investigate. We found a controlled burn happening in two fields. The smoke could be seen for miles. 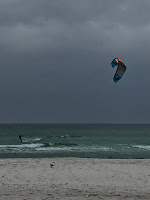 One day we headed north to Dothan, AL as we needed things from Camping World. Another day we headed south to Panama City and Panama City Beach, we picked the wrong day as it turned out cold and rainy. We did see one brave wind surfer. The link from June 2016 has lots of pictures from both places. 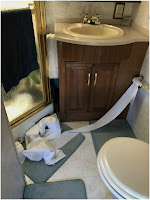 We left Cottondale and headed to Madison on December 21, 2017. When we landed at the Yogi Bear Jelly Stone Park and opened the bathroom door we discovered the toilet paper had unraveled itself - never had that happen before. 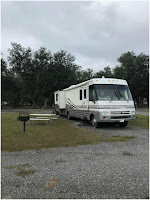 This is a very large park and offers everything you would expect from a Yogi Bear park. Swimming pools, a waterpark, beach, stocked lake, lots of lawn games, cabins, tent camping and full hook up RV sites. This time of year there was hardly anyone here. We had a wide pull through site that was plenty long enough for the RV, tow-dolly and parking the car.
There were plenty of places for Nancy and Mielikki to get their mile walk/run in every morning. It was so very peaceful walking the path around the lake and through the Spanish Moss tunnels, and watching the cranes and herons look for breakfast. 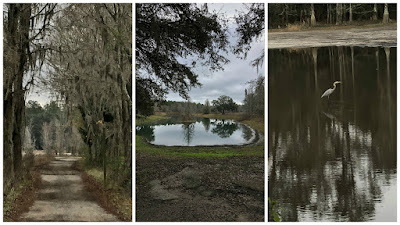 The Wifi was good, Verizon signal was strong. The park is pretty quiet even though you are right off of I-10. We paid $30.00 a night with our Passport America discount.

Madison is quite a nice little town. Very well kept up, with a beautiful court house and a lovely central park that was decorated for the holidays.
It is also where you will find the Four Freedoms Monument. It was designed by Walter Russell and on June 14, 1944 it was dedicated in memory of Captain Colin P. Kelly Jr, a WWII hero. The Four Freedoms were stated by President Franklin D Roosevelt in his Message to Congress on January 6, 1941. Freedom of speech and expression, freedom of worship, freedom from want and freedom from fear everywhere in the world.

You know if there is an old cemetery we are going to explore it. The Madison Oak Ridge Cemetery dates back to the late 1800's. 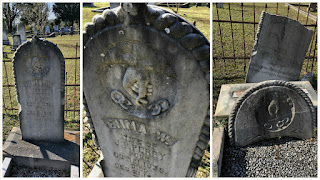 There were some of the usual images such as hands pointing to the heavens but no clasped hands. We did find one we haven't seen in a while. A hand breaking a chain. We have seen the broken chain but not the hand with it. 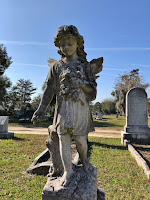 Angels and lambs are always found, as well as bibles, but this time there was one with a hand holding the bible open. 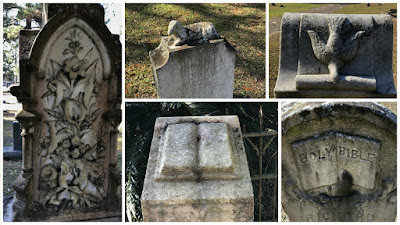 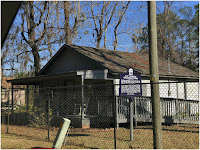 Greenville, FL is just down the road and the birthplace and childhood home of musician Ray Charles. There is a statue of him in the town park and the house he grew up in has been restored. While you can arrange a tour of it we opted for just a photo.

The Sunrise Cafe is such a charming place. The tables and chairs are all old antiques and your pastries are served on an eclectic assortment of china with beautiful silverware and cloth napkins. 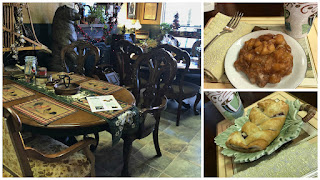 Nancy painted a few more rocks to leave behind at various places we stay. There is a large rock painting movement, not only with RVers but a number of towns as well. You can find Facebook pages for a lot of them, the one we follow is RVing Rocks! 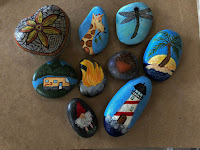 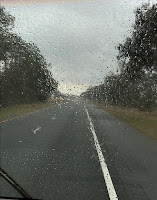 A rainy Christmas Eve day was moving day to Silver Springs, FL.
This is where Nancy's brother Bob and his wife Bonnie live. Once we got settled in at the Robin's Nest RV Park we enjoyed a lovely dinner with them. The RV park leaves a lot to be desired. 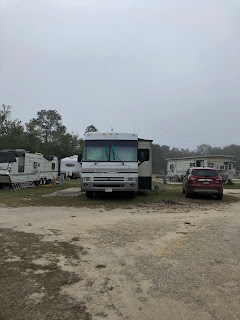 It is a combination RV Park and Mobil Home Park. The current owner has only had it for about 6-months and even though he says his first priority is cleaning the place up it is hard to believe him as there is trash everywhere. A tenant had been evicted and there were large piles of their belongings still laying on the site. There is no WiFi. We paid $30.00 a night with a military discount.
Christmas Day we carried on our tradition of seeing a movie. This year it was just one. The Last Jedi, we both loved it. 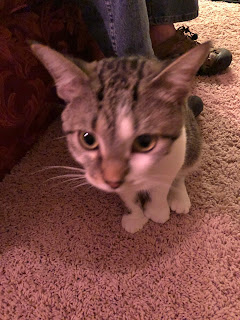 After the movie we enjoyed a nice evening with Bob and Bonnie. Forgot to get pictures of them, but did get some of their kitty. Check out the paws, she has six fingers just like her Momma, who was hiding from us.

We made a change of plans while staying here. Originally we were going to head down the east coast to Key West then back up the west coast. That was until we discovered that we couldn't find any place to stay that was under $100 a night, and that was IF they had openings. Plus, Nancy is experiencing some issues with her eyesight, some blurry vision. So we are heading north back to Asheville for an eye doctor appointment. A bittersweet decision, while it will be nice to hit Asheville for a day or two we are missing out on seeing friends and additional family in Florida. People we have met along the way and friends we haven't seen in almost 40 years.

Next, stop is Brunswick, GA and Jekyll Island.

Tips and things we have learned along the way.
~ More gadgets to play with. 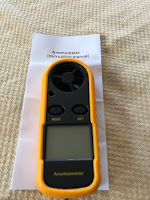 The Anemometer is for testing air flow coming through your vents. This way you can tell the strength of air flow for the heater and air conditioner. Which helps in determining if there is a blockage in the passage way and/or the strength of the fans.