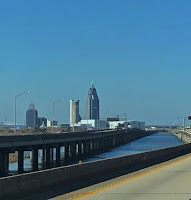 The trip on January 21, 2018 took us through Mobile, AL. It is such a cool drive as you head west into town with the water surrounding you. 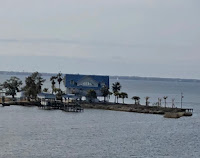 We also passed a number of houses that seem to be the perfect place to live. Well, unless of course there is a hurricane or tropical storm!

Pass Christian RV Park was our destination. It is a small park, mostly permanent residents, but well kept up and very quiet. 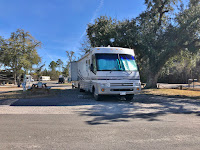 It is a no frills park but there are bathrooms and a laundry room, all of which were clean. We had a pull through site, average width, with full hook-ups. There is very little traffic on the road and some empty fields along the way so lots of places for dog walking. We paid $14.98 a night with our Passport America discount. Michele, the manager was fantastic, we had all of Les's meds from the VA shipped to her office in Gulfport and she even offered to have them delivered to us.
Roadside Oddities were everywhere along the bay.
In Ocean Springs we finally got a picture of the Mississippi Peter "Wolf" Toth Indian, except it's not really a Toth carving. The original Indian, Crooked Feather, was destroyed by rot and termites and the city powers that be thought that Peter Toth had died. So in 1999 they commissioned local sculptor Thomas King to carve a new one. Sad that we didn't get to see an original but glad they replaced it and still honor the Trail of  Whispering Giants. 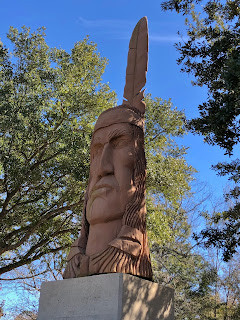 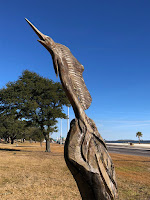 All along E. Beach Blvd/Hwy 90 are trees that died during the hurricane that have been turned into art pieces. They have been carved into birds and sea animals. 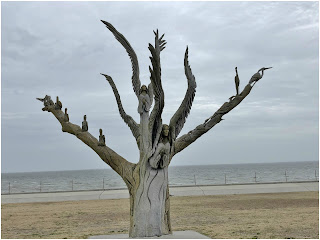 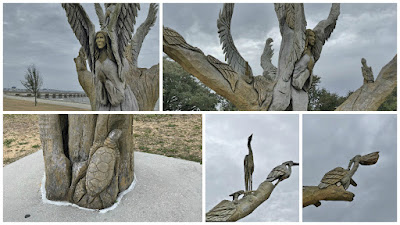 There is one in Bay St. Louis that has been carved with three angels. Each one represents the three people who clung to this tree during the hurricane and survived.


There are a number of memorials to Hurricane Katrina but the one in Biloxi was the most touching. 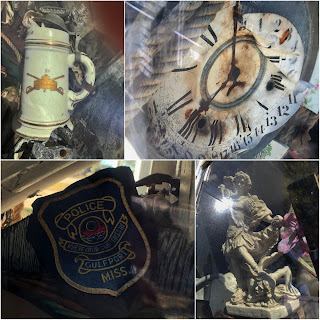 The wall lists the names of the people lost and the glass case is filled with personal items that were found in the clean up. Seeing all of these items, some broken, most dirty just speaks volumes as to the impact on so many lives.

We found a few quirky roadsides as well. In Biloxi we found a Gater Mouth and a Shark Mouth, both are entrances to souvenir shops. The Pig on a Car is of course outside of a BBQ place. 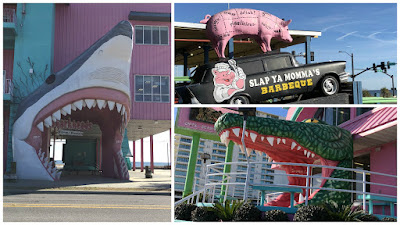 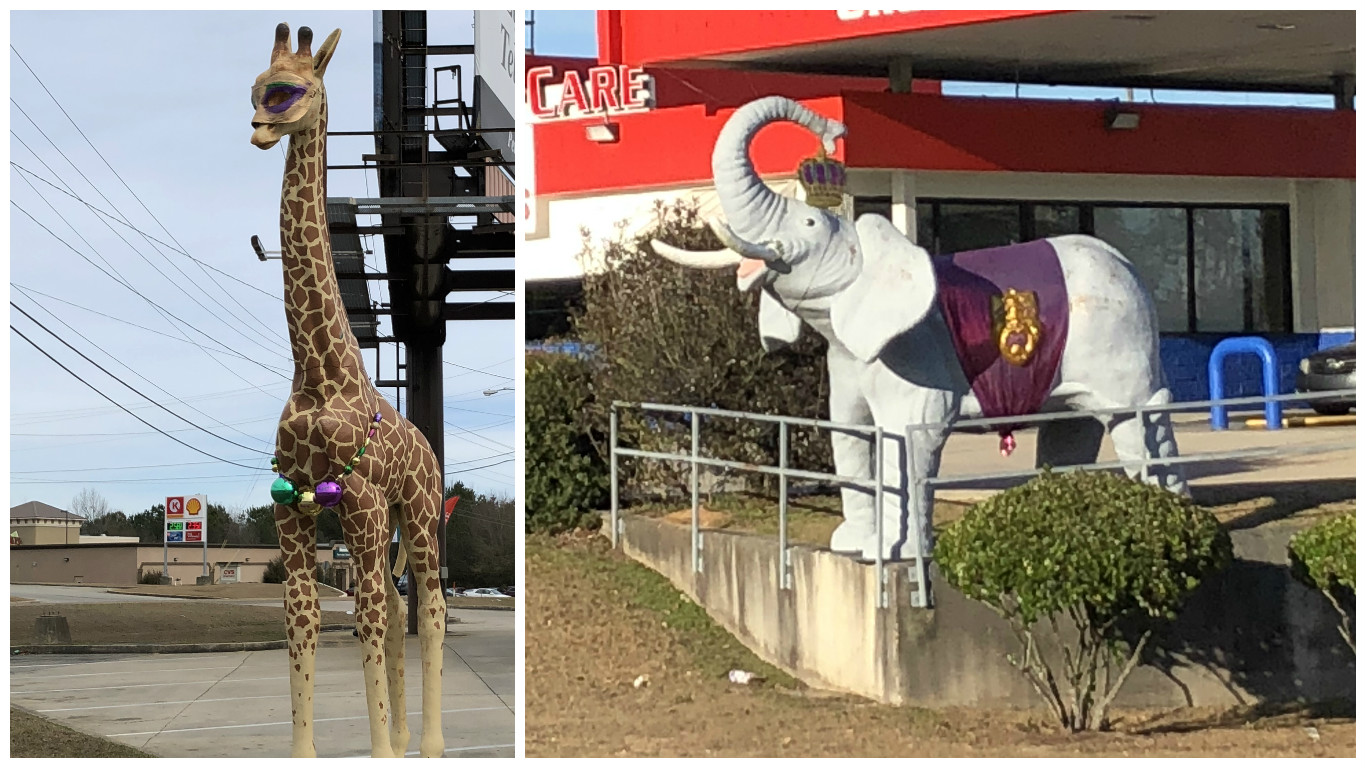 Both the Giraffe and Elephant, outside a gas station in Gulfport, were ready for Mardi Gras. 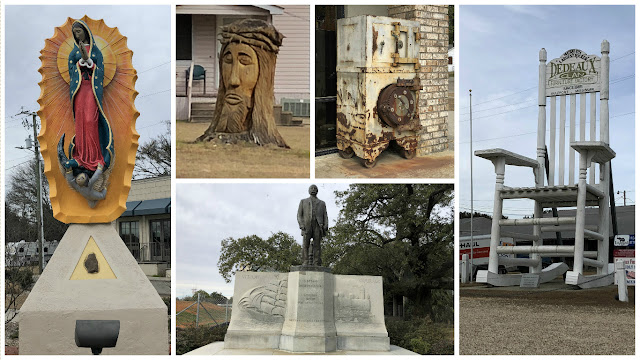 Also, in Gulfport there is a Giant Rocking Chair, an Old Safe, a Weeping Jesus that was carved after the hurricane, a tribute to Our Lady of Guadalupe and a statue of Joseph T. Jones, the "father" of Gulfport.


While in search of the oddities in Gulfport we found the Busted Wrench Garage. 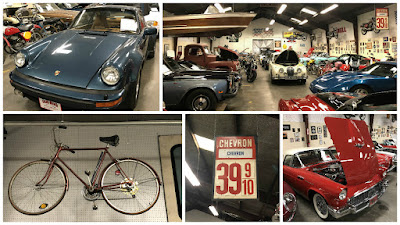 The owner who restores cars has quite the collection of old cars, bikes and boats. Wouldn't you love to see gas at that price? 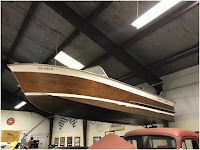 The wood Chris Craft is very similar to one Nancy's folks had when she was a kid.
They put it up for sale in a neighbors driveway and in the middle of the night someone stole it. Our neighbor, Mrs Rudy, tried chasing them down the road in her nightgown. Poor thing she was so upset she couldn't catch them. 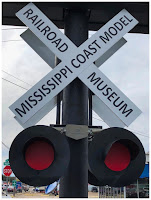 Another fun place was the Model Train Museum, we wished our son-in-law Steve had been with us, he would have loved it.

They have close to 200 years of history in their displays which cover four different rooms, one of which is a playroom with wooden train tables and a small riding train. The train gauges run from Z through G scale models. 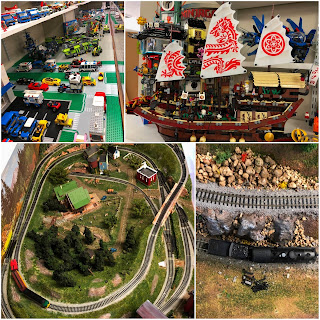 There are two Lego train layouts that have almost a million Lego pieces! Imagine those across your living room floor.
Large and small layouts fill the cases as well as a ceiling mounted track. 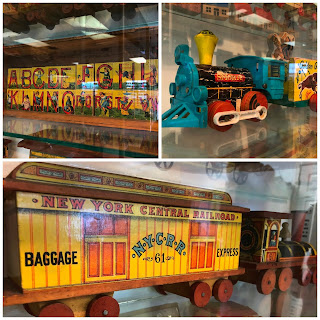 One whole wall is glass showcases filled with trains some close to 200 years old.

We met the "conductor" aka the owner, and he was thrilled to tell us about them. He then insisted we had to go for a train ride and of course it would have been rude not to. 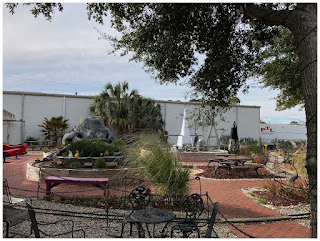 The LG scale riding trains cover the entire outside area. The brick path lets you wander past the displays and at the picnic area you can enjoy all the trains going by. 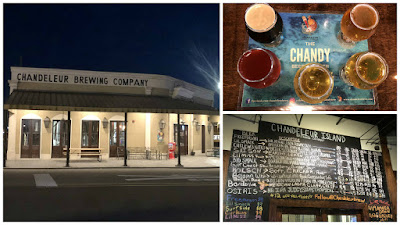 We also found a brewery in Gulfport, The Chandelier Brewery. It is dog friendly so we stopped for a flight. We had planned on just a quick visit, but ended up being there for a couple of hours. The lady sitting down the bar from us was originally from North Carolina so we struck up a conversation with her. We then discovered Amy now lives in New Orleans, so we picked her brain for things to do and found out she was going to be in a Mardi Gras parade while we were there. Her and Les found they have a great deal in common as she is in Human Resources, which is his background. What a great time we had with her, we exchanged contact info and hope to see her in New Orleans.

Being on the coast of the Gulf of Mexico we came across some lighthouses. One in Gulfport and one in Biloxi.

Both Biloxi and Bay St. Louis have old cemeteries that we explored, both with headstones from the mid 1800's. 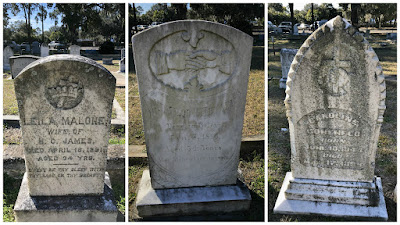 In the Old Biloxi Cemetery we found a number of headstones with a cross and crown, which we haven't seen in awhile, the ever popular clasped hands and a hand holding a cross. Of course we always find angels, this time one cut from wood. 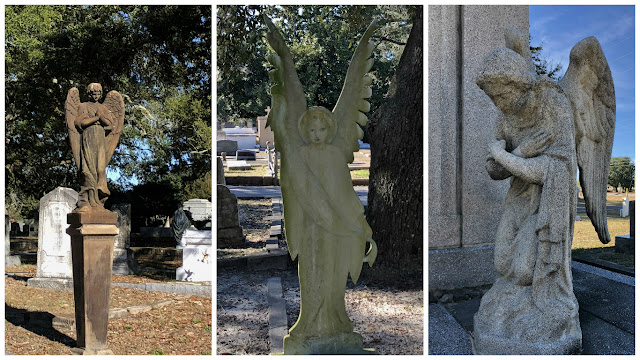 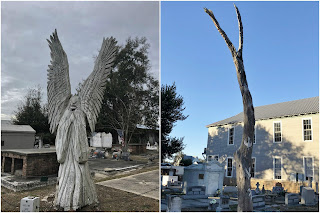 Bay St. Louis Cemetery also had a number of angels, two of them carved from trees. There were a few more with the hand holding a cross and a couple with fingers pointing the the heavens.
This is the most Woodmen of the World headstones we have ever found in one cemetery. We found 10 and a couple others that we think had the logo but they were so worn we weren't sure. In researching them we discovered it is a fraternal order. The link will give you a little history. The biggest surprise was the wooden headstone, and still in fairly good condition considering how much moisture there is here. 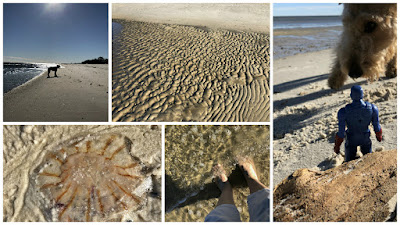 Much to Nancy's delight we spent an afternoon walking the beach in Bay St. Louis. Mielikki was pretty happy too, as this is one of the few beaches in the area that allow dogs.
We found this interesting sea creature - jellyfish maybe?

We walked barefoot in the sand and enjoyed the sunshine. Of course Nancy had to put her feet in the water. Yes, we brought half the sand from beach home with us! 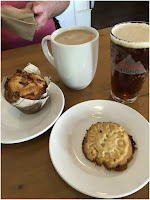 After enjoying a yummy break of coffee and beer -
it was a coffee stout, not a Coors Light, we watched the sunset over the gulf. A perfect way to end our last day here. 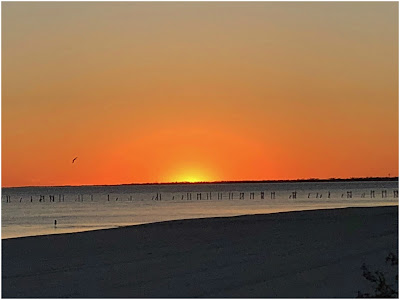 Up next is New Orleans with Katrina and Steve.

Tips and things we have learned along the way
~ Sorry because we are so far behind in blog posts we are skipping the tip this time - unless once again we tell you to not let yourself get so far behind in things!