Our much anticipated stop in New Orleans started on January 30, 2018. With Katrina and Steve flying in on January 31st to spend five days with us. We had so much fun with them. 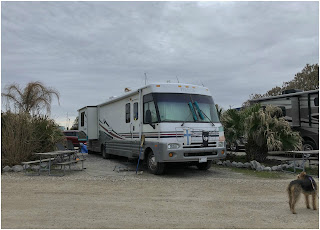 We stayed at the Pontchartrain Landing RV Resort, which is on a canal off of Lake Pontchartrain. It is a large park, about 12 minutes from the French Quarter, unless you are driving in rush hour traffic which we seemed to do a lot. The sites are a little on the narrow side but there are palms planted in between each site that offers nice privacy. They are level and have full hook ups. You can also rent cabins and houseboats. There are lots of places for dog walking and a nice fenced in dog park. We paid $48.30 a night with our Good Sam discount.
Mississippi River Paddle Boats are always pretty but especially at night and with a full moon. These were just across the canal from the RV Park. There were tons of parakeets in the park - it seemed so strange to see them at the bird feeders 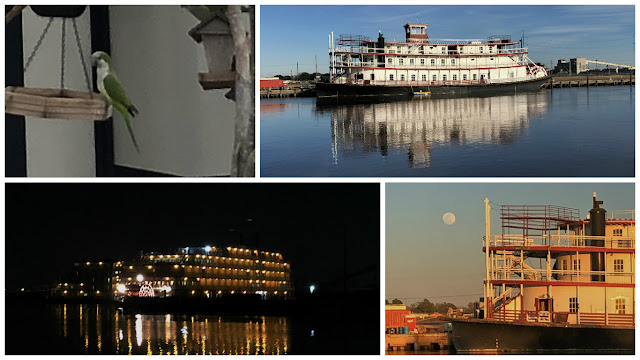 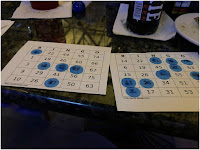 The Lighthouse Landing is the onsite restaurant. We enjoyed some adult beverages the first night Kat and Steve were with us, and dinner another night. The night we went for dinner was "bingo night" and yes, all four us groaned a little. But it turns out we were all a little competitive during the Bingo game and actually had fun even though none of us won.

The five days flew by but we packed as much as we could into them. Our first day out started with breakfast at the New Orleans Cake Cafe & Bakery - it was so good we went back another day. 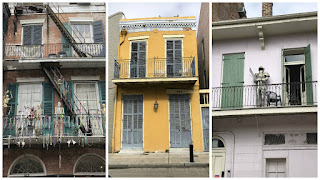 Wandering the French Quarter is always fun. Katrina has been here a few of times, and showed us some of her favorite spots. We walked and walked and walked some more which was a good thing as we ate and drank a lot. 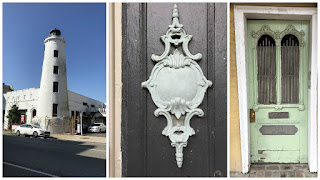 The architecture of this town is so beautiful. It doesn't matter what street you are on, you will find lovely iron work and an assortment of colors that will make you smile. 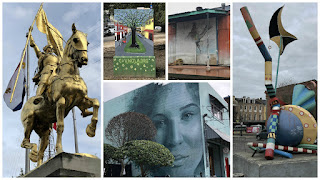 There is also art and sculptures every where. Not surprisingly the market sculpture was found at the French Market, which is an open air market filled to the brim with crafts, food and more.
We visited New Orleans back in March 2016 and that blog post has many more pictures of the city. 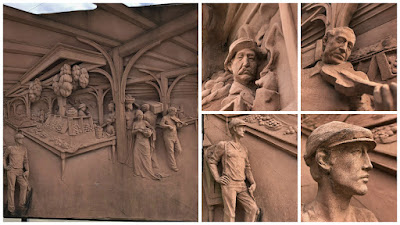 After wandering in and out of all the shops you need a little refreshment. Cafe Du Monde for Beignets is a must.
Of course Breweries were on our to-do list.
We enjoyed an assortment of craft beer at Second Line, The Courtyard Brewery which has a large screen TV with a live feed of insects, Urban South and our two favorites NOLA Brewing, more on that later and Brieux Carre' Brewing.

There is nothing like a really good cup of coffee and we found a few places to get some. French Truck Coffee was one of the best, Spitfire Coffee and Pulp and Grind were also very good.

Did we mention food? There is no shortage of that either. The highlights were delicious Po-Boys at Mahony's. Absolute amazing BBQ from McClures at the NOLA Brewery - BBQ Poutine on Waffle Fries, oh man it was good. It would be worth going back to New Orleans just for that. 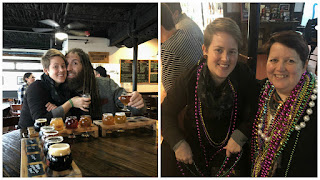 While at NOLA Brewery we decided to take a tour. As you can imagine this was not the first brewery tour we have ever been on. Our tour guide was a hoot and just a little tipsy. Pretty sure Kat or Steve could have given more info! 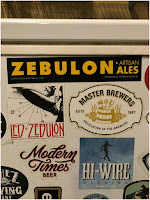 We loved seeing Zebulon and Hi-Wire stickers, both from the Asheville area.

They were in the process of putting the finishing touches on their parade floats and Nancy loved the mural and all of the metal pieces from the tanks. 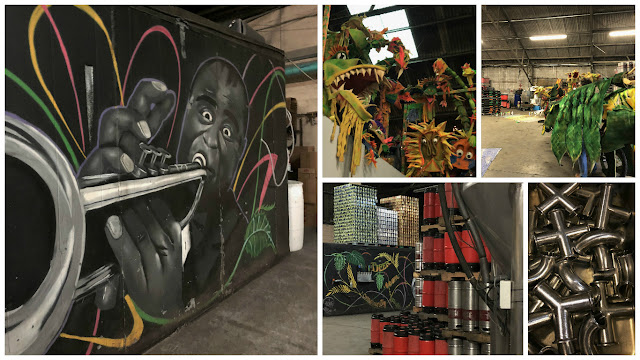 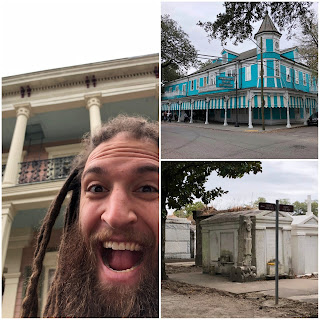 The Garden District tour was entertaining and a little bit disappointing as well. It was supposed to include a tour of the Lafayette Cemetery but it closed two hours earlier than expected so we couldn't get in.
If you look behind Steve's head in this picture (he loves to do this to Nancy) you will see that the ceiling of the porch is painted blue. All of the houses had this to keep the wasps from building nests as they think it is the sky. Will have to remember this if we ever have a porch again. 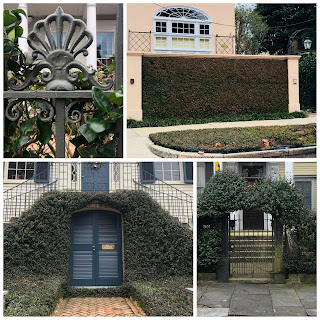 The tour guide was good and shared lots of stories and tidbits. Houses of the rich and famous and not so famous are included in the tour.
The fences and gates were almost as interesting as the houses. In the upper right picture the hedge is growing inside the wall, the bottom left is a split staircase. Designed so that the women could go up one side and the men up the other so they would not see the woman's ankle when she lifted her skirts to climb the stairs. 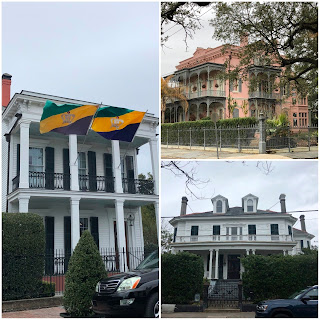 The flags flying on this house are not your ordinary Mardi Gras flags. These are special flags for former Queens of Mardi Gras, two flags fly at this house as both mother and daughter have been Queens.

One of the houses had a fence with signs all over it pertaining to dogs. These three were our favorites. 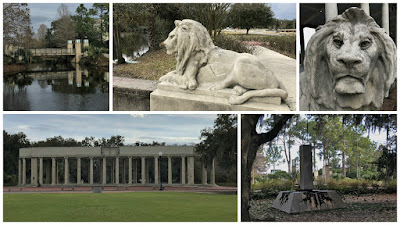 Katrina and Steve had never been to City Park, so we took them there and wandered the Sculpture Garden and then walked through the Historic Oak Grove with trees over 100 years old. It is the largest collection of mature oaks in the world and it is breath taking. 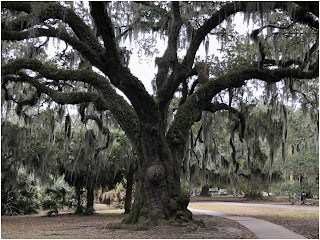 This beautiful park was once the site of the Allard Plantation. The 1300 acres include a Botanical Garden, a Carousal, tennis courts, hiking trails, paddle boats, horse stables, a stadium, golf course, soccer fields, an Art Museum and more. During the Great Depression, 20,000 men and women were employed through the Works Progress Program to build the roads, bridges, gardens, fountains and the stadium. During Huricane Katrina 95% of the park was flooded and damages exceed $45 million. Much work has been done to repair and improve the park. 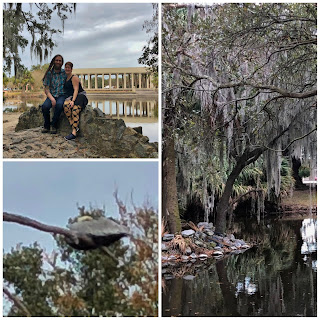 The Spanish Moss on the trees is so pretty. The bottom Left picture is a pelican sitting on the branch

While trying to get a picture of Kat and Steve on one of the stone bridges they got photo bombed by ducks!

Mardi Gras was starting to crank up while we were here - wow it was crazy. Can't imagine what the actual week of Mardi Gras is like. 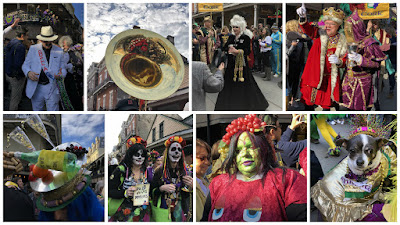 We saw a number of parades starting with the Krewe of Cork. Amy,  whom we met in Gulfport, MS was in this parade.

What a hoot, people dressed in all number of costumes and of course there were bands. We saw gansters, the King and Queen of Cork, crazy hats, Day of the Dead, grapes and even a dog.

There was also corks and openers and unicorns blowing bubbles.

The couple in the cork clothing were quite elegant. Winnie the Pooh and pirates made an appearance and even the crowd watching was pretty colorful. 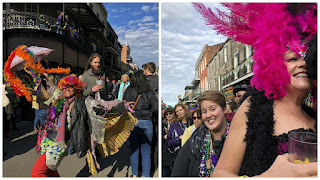 Pretty sure this lady would have danced with Steve if he had let her and Katrina looks so little next to the feather lady.

Steve does seem to find interesting places to hang out. 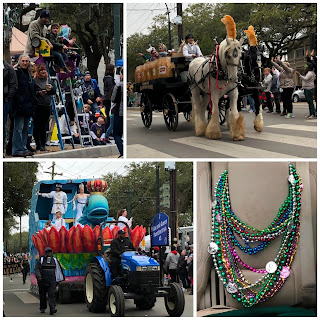 After the Garden District tour we walked a few blocks to see the Krewe of Pontchartrain parade. We didn't stay for all of it as it was starting to rain but long enough to see some bands, horses and few floats. Of course more beads.

We saw more of the floats as they headed back to storage, while we were enjoying a beer and BBQ at the NOLA Brewery. More beads were acquired from these floats too. 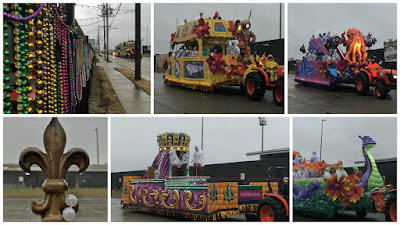 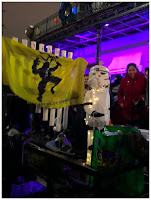 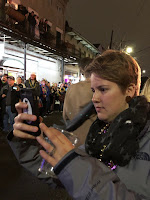 The day wasn't done, we then got to see the best parade ever. The Krewe of Chewbacha, a nerd parade! Katrina was in heaven. 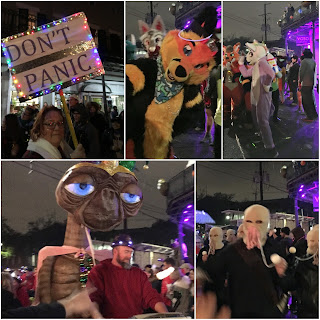 It was so much fun. Every nerdy, geeky thing you can think of was represented.
Star Wars, Pokemon, ET, Browncoats, Aliens and so much more. 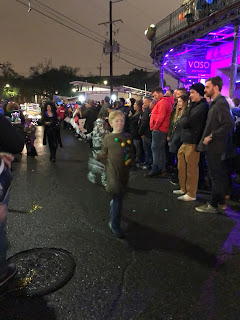 Not sure if we were more excited about the parade itself or all of the young kids involved in it - future nerds!!


Wonder Woman, in all shapes, sizes, colors and ages showed up. Yes girls, the world is waiting for you. 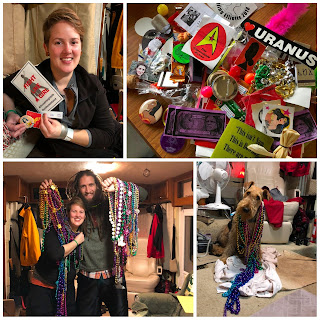 We not only got a ton more beads we also received a plethora of other items, stickers, pins, dolls, magnets, books and candy. Katrina was thrilled with her Fight Like a Girl card.
Mielikki wasn't quite as excited about all the beads as we were.


The Krewe of Barkus was our least favorite parade. 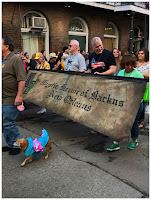 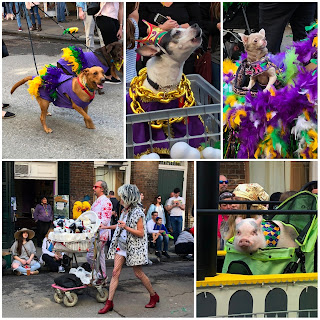 It moved pretty slow and had way to many large gaps in it. The dogs we saw were very cute and there was even a pig, but we didn't stay for the whole thing. Went in search of a cup of coffee instead.

Jazz is everywhere in New Orleans, lots of street musicians and music drifting out of every building. The Spotted Cat is one of Katrina's favorite places, a small place with big sounds. So much fun listening to the bands.


It was such an amazing time and we also got to celebrate Steve's 30th birthday. We are so blessed to have him as a part of our family. Can't wait till we are all together again.

Now we start our trek to Dallas for a family wedding. Up next is Hattiesburg, MS.

Tips and things we have learned along the way.
~ Just like having a house
We have commented more than once that living in an RV is not that much different than living in a house - well except for the size. A few of our last tips were about gadgets we have to help us with different things. Well, we made another trip to Harbor Freight - it is as dangerous for Les to go there as it is for Nancy to go to Michaels Craft store! 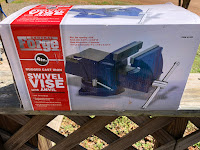 On this shopping spree Les picked up a vice, as he had worked on a few projects that would have been easier with one. It is small but study and at some point will be attached to the tongue of our tow dolly. Our next tip will show a project he used it for.
Posted by Nancy B at 6:49 AM