The Road Home to Asheville - Part 1: Arkansas and Mississippi

On March 11, 2018 we headed to Lake Village, AR and the Pecan Grove RV Park. Sadly all of the rain has turned many of the farm fields into lakes. 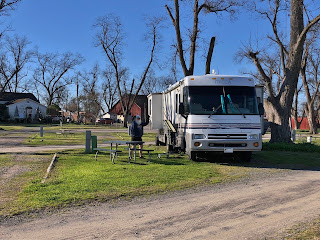 We stayed here back in February 2016 after diamond mining in Murfreesboro. The park is a mix of permanent residents and overnighters. As the name suggests it is a Pecan Grove and they sell shelled pecans in their gift shop. All of the sites are pull-throughs with full hook-ups and are about average width. Seeing we explored the area on our last visit we spent this time working on some projects and catching up on the blog. 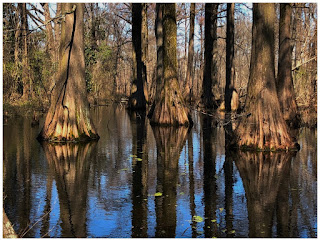 We did venture out to do some grocery shopping in Greenville, MS, which is just across the Mississippi River, and made a stop at the Cypress Preserve Trail. The blog from last time has lots of pictures. It is a beautiful preserve with trails and wooden bridges that take you across the sloughs.

Nancy would love to have a house that looks like the Greenville Visitor Center. 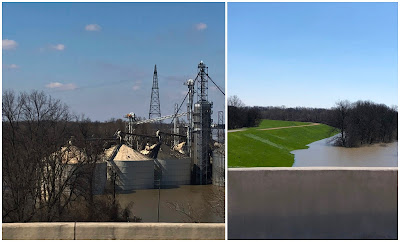 As we crossed the Mississippi River we were so surprised to see how high the water is. It is working its way to the top of the berm which is close to a mile away from the river, and the grain elevator is already underwater. 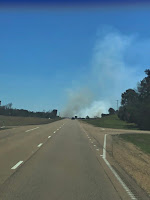 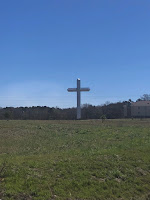 We passed a Giant Cross in Winona, MS and it always makes us a little nervous when it appears we are driving into a fire. It was actually to the south quite a ways so we don't know what was burning.


We stayed three nights at the Island Road RV Park. This is a small, no frills, eight site park just minutes from downtown. The sites are all gravel back-ins. Plenty long enough for our rig, tow-dolly and parking the car. They are average width with the exception of Site #6 which we were in, it is nice and wide. There is no WiFi but our Verizon signal was good. 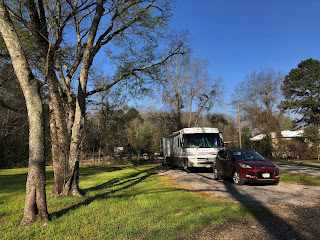 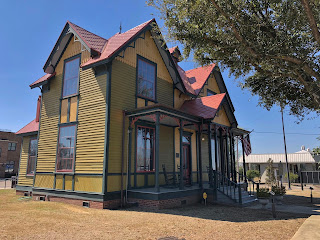 Downtown Columbus has a number of shops and restaurants. It is also where you will find the Tennessee Williams Visitor Center. He was born here on March 26, 1911. He spent the first few years of his life living with his grandparents. His maternal Grandfather, Reverend Walter Dakin, was the rector of St. Paul's Episcopal Church.  Tennessee, along with his mother, Edwina and sister, Rose lived in this house for three years while his father traveled for business. Then the family moved to St. Louis.
This house was the church rectory and was moved a few blocks north to this location when the church expanded. It was originally white, the Historical Society was granted permission to use these colors as they were used during the time Tennessee lived here.
The house is furnished with period pieces, some of them from the family.

Our visit there included a wonderful conversation with Carolyn, we hope we are remembering the name correctly. She shared some great historical stories with us and gave us lots of information of things to do.


One of the upstairs rooms has been turned into a library. The walls are lined with photos and a running tale of Tennessee's life. He was actually born Thomas Lanier Williams. When he went away to college in Iowa his southern accent earned him the nickname Tennessee and it stuck. 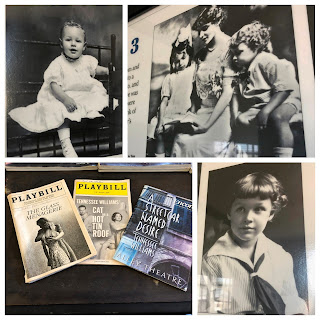 Top left picture is Tennessee as a toddler - right is him and his sister Rose, with their mother. He is 5-years old in the bottom right picture.


This stop turned out to be the cemetery tour stop. As you know we love old cemeteries and we found three in the area.
Two of them were in Aberdeen, which is about a half-hour north of Columbus.
The Old Aberdeen Cemetery is what we went in search of and once there we found another one right across the street.
It is believed the cemetery started in 1838 when Abel Pierson was buried on his friends property. No records of a public cemetery can be found until 1845. A number of the sculpted monuments in all three cemeteries were done by the Miller brothers, Richard and Cornelius from Columbus. 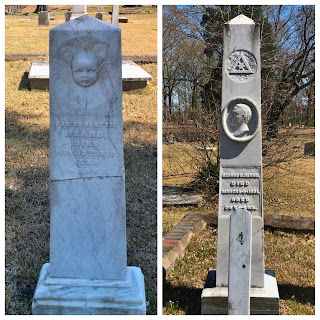 These two are father and son - Dr. George C. Heard and James Beattie Heard who passed away at only 14 days old. There was one other obelisk for the wife/mother, but there was nothing sculpted on hers. 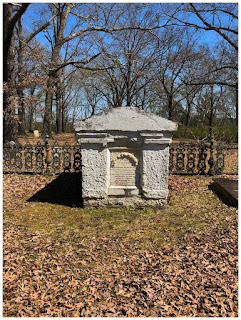 Two of the more unique graves is what brought us here. The only tomb in the cemetery is for Mrs. Whitfield, who supposedly is buried sitting in her favorite rocking chair. The iron fence surrounding the tomb has Willow Trees with two lambs resting underneath it. 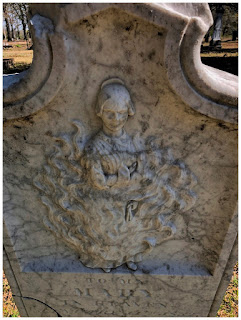 The other interesting tombstone is for Mary Points. She died in 1852 when her skirt caught on fire, and her husband ordered a carving of her in flames. Not sure that is how we would want to remember a loved one. 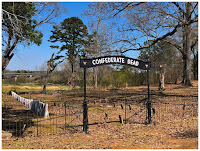 There is a fenced in area for the Confederate Dead. Many of the headstones are Unknown Soldiers.


Across the street is the Odd Fellows Resting Place. This is a much larger cemetery and still in use today.

We of course found angels of all sizes and shapes.

The Weeping Angel seems to sum up the feelings of the death of a loved one perfectly.
This was the first of two we found. 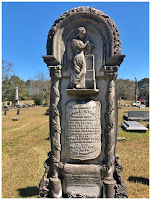 The Reynolds family had more than their share of loss. There is a large headstone for Morgian E. Reynolds, wife and mother. She died in December 1858, just months after her third child passed.
The three beautifully carved headstones are all young Reynolds children. Such heartache.

The Friendship Cemetery is in Columbus. It was founded in 1849 and is credited as the forerunner of  Decoration Day, or as we now call it Memorial Day. On April 25, 1866, four Columbus women decorated the graves of both the Confederate and Union soldiers with flowers.They felt bad for the families of the Union soldiers, not knowing what happened to their loved ones. 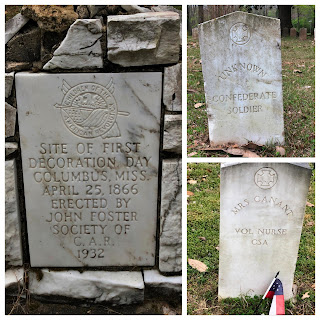 The impartiality of the women, all who lost Confederate family in the war was honored in a poem written by poet Frances White Finch, "The Blue and the Gray". During the towns Spring Pilgrimage, students in the high school honor program, pick a person from local history and research them and then become that person during the festival, performing in costume during the tour of the cemetery. 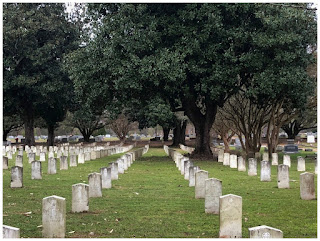 It is a rather poignant image as you look out across the rows of tombstones belonging to the soldiers. So many died that they needed two sections for all the graves. 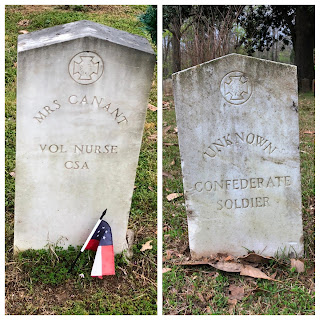 There are 2,194 graves, the majority of them are unknown soldiers. Only 47 of the Confederate dead were identified until 1976 when a record book was found in the attic of the caretakers office. It listed grave numbers and names of 298 soldiers and one volunteer nurse. New headstones were put in place. There were 32 unknown Union Soldiers buried here, but in 1867 they were reinterred in the Corinth National Cemetery.

Once again, of course we found crosses, one that is a little different than normal. A tree stump and a cross together, and one very large one with an angel.

There were a number of other interesting ones. 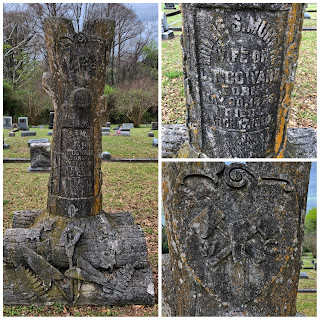 We thought this tree would have been a Woodmen of America, but to our surprise it was not and it is for a women. 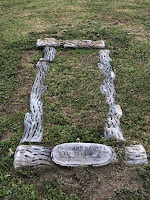 The outline of Miss Ann Bartee's plot is made from cement "logs". 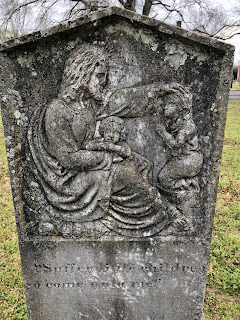 There was another touching one for a small child. Jesus sitting with children is carved into the headstone.

This is also where we found the second Weeping Angel, or as it is sometimes called The Angel of Grief. It is draped over the headstone of Rev. Thomas Teasdale. He relocated here from Massachusetts and was the pastor of the First Baptist Church. The congregation was so deeply saddened when he passed they ordered the angel and stated that "When he died, even the angels cried."

Never intended for this blog to be comsumed by cemeteries but that's what happens when you find three wonderful old cemeteries to explore. So much history, heartbreak and even success is shared in them.

Next we head through Alabama and Georgia.

Tips and things we have learned along the way.
~ Clearing the tanks
Keeping our tanks, grey water and black water cleared is rather important. On a recent stop the sewer connection was so low into the ground that it was hard to attach our hose. 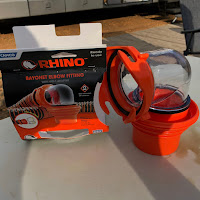 It seems this is a common occurrence as there is a solution to this problem. This handy gadget helps to raise the connection so the hose sits where it should and empties without problems.
Posted by Nancy B at 5:24 AM