On February 20, 2018, we headed to Simsboro, LA. and the Antique Village RV Park. Our original plan was to stay for 5 nights but changed our minds when we found out the weekly rate was $125.00 and nightly is $30.00. There are 65 sites, 80% of them are permanent residents, most are kept up but some are a little rough. It is very quiet, except for the train that runs throughout the day.
Our site, B-36 was perfect.

It is a pull through with full hook ups and fairly level. It sits on a hill and there is a large raised wooden deck with a picnic table that overlooks the stocked lake. The laundry and bathrooms were clean. The WiFi was very weak, and our Verizon signal was not all that strong either.
After our family weekend in Dallas we ended up back here from March 8-11, 2018 as we work our way back to Asheville, NC. That stop was pretty low key, with some shopping and checking out Grambling State University. We were in the same site and paid the $30 a night with no discounts.

Roadside Oddities and Shreveport were on our to-do list. Once again we had more days of rain than not so hiking was out of the question. It rained so hard for over 24 hours we were glad that we were on the hill and not at the bottom of it. 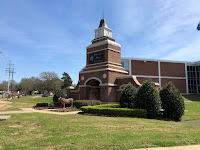 Grambling State University is just a few minutes from the campground. It was founded in 1901, and at the time was called the Colored Industrial and Agricultural School. It emerged from the desire of African-American farmers in rural north Louisiana who wanted to educate other African Americans. It became Grambling College in 1946 and gained University status in 1974.
They have a very interesting football field, it is below ground with the stands built into the hill. 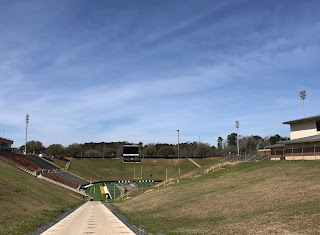 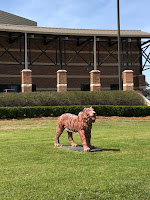 The next two towns west of the campground are famous for their connection to the ambush of Bonnie and Clyde. 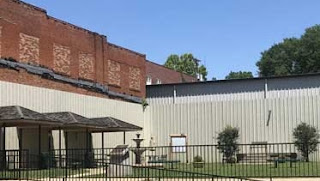 The funeral home that was used to embalm the couple was in Arcadia, LA. It has since burned down and now there is a small park where the building stood. 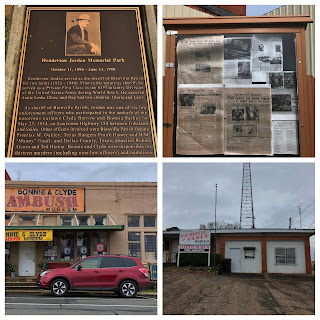 A plaque commemorates the police officers involved and there is a sign board with copies of the local newspapers that told the story of the ambush.

In Gibsland, LA you will find not one but two Bonnie and Clyde museums. 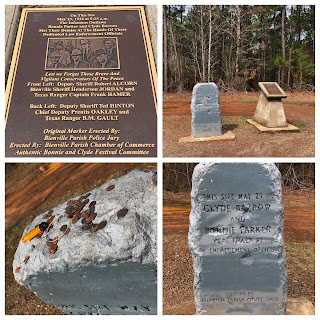 Driving south about 5-miles will take you to the spot where the ambush took place. There is a headstone type marker, complete with bullet holes, and a plaque that describes the events and the officers who shot the couple. People have left money and trinkets on top of the marker. 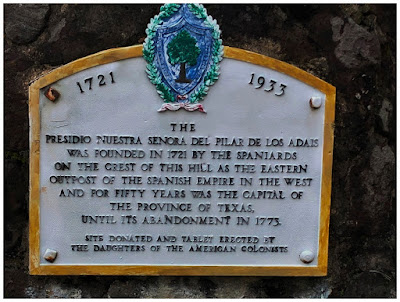 We continued to head south from there to Robeline, LA which was the Capital of Texas from 1721 - 1773. Who knew? The sign is in the Los Adaes State Historic Site which is on the El Camino Real Historic Trail.

On our way to Robeline we passed through Natchitoches, pronounced Nack-a-tish. It is the original French colony in Louisiana. If you are a Steel Magnolias fan, then you might want to visit here, as this is where you will find the house from the movie. 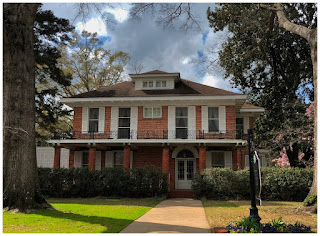 We never know what we will come across in our travels, this time we found a Cowboy who has seen much better days. He kind of looks like something out of a sci-fi movie. 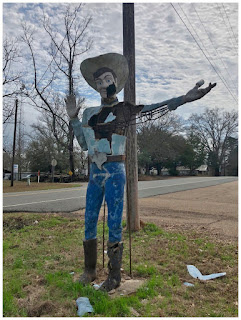 We also found this cute Gorilla holding a palm tree. It was outside of a thrift store and you know we would have gone in if it had been open. But, it is only open the second week of each month - seemed like strange hours to us. 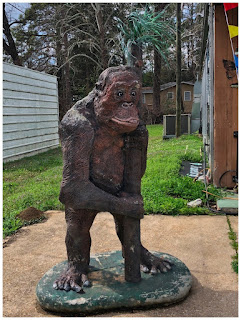 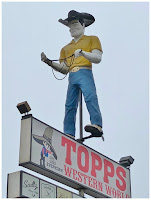 In Houghton, just east of Shreveport we found the Tall Skinny Cross, it makes the church and playground seem rather small.
In Bossier City we found Bubba the Cowboy Muffler Man.

Shreveport, LA held some surprises for us. First, we expected it to be a lot more active. The downtown was pretty dead with a number of empty store fronts. Both sides of the Red River have been built up with casinos, which of course has a tendency to run other businesses out. We did find a number of murals and street art. 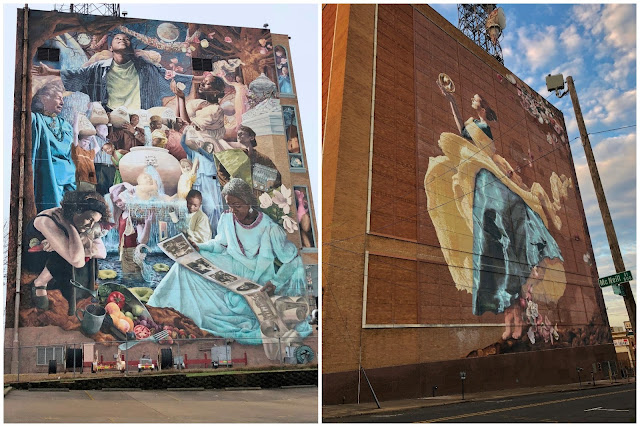 These two amazing 14-story murals are both on the same building. The funny thing is we took the pictures on two different days and didn't realize it was the same building until we were heading out of town in the RV and saw it from the bridge over the river.

We found four more as we drove through the town.
Some of the murals are abstracts and some with quite a lot of detail. Nancy loved the Alice In Wonderland one. 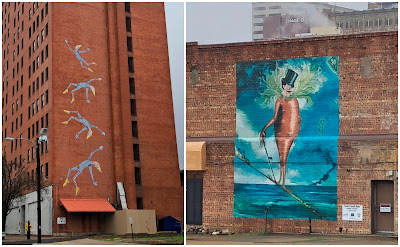 In October 1954 Elvis Presley played on stage at the Shreveport Municipal Memorial Auditorium. It was considered to be his first big break. Fifty years later a statue was unveiled on the lawn of the Auditorium. 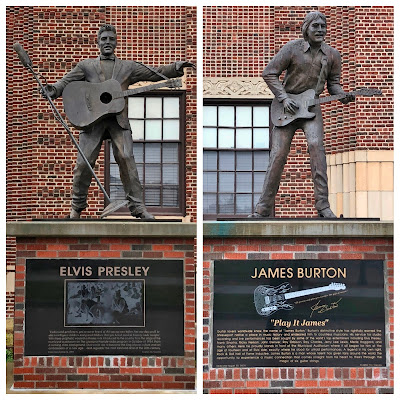 Next to the Elvis statue is one of James Burton. He was born and raised in the area. He is considered to be one of the greatest guitar players and was inducted into the Rock n' Roll Hall of Fame in 2001. He played guitar on all most all of Ricky Nelson's songs, along with numerous other artists and the guitar solo on the song Suzie Q. His band, The TCB Band, backed Elvis Presley from 1969 until his death in 1977. He has played with many popular rock and country groups over the years and moved back to Shreveport in 1990. In 2005, he started the annual James Burton International Guitar Festival to raise money for his charitable foundation. The foundation supports music education for those in need. They have given away thousands of guitars, and provide musical instruction in hospitals and schools to children, young adults and veterans.

There are a number of these Large Framed Weaving's all over town. The frames are as interesting as the weaving's. 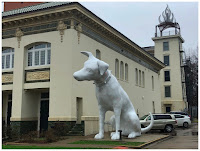 Our favorite was the 19-foot Dalmatian. Back in the early 80's we had a Dalmatian whom we called Koira. Which is Finnish for dog. She died of kidney failure when she was just four, so we have always had a soft spot in our hearts for Dalmatians. 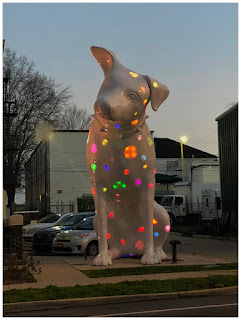 This giant is filled with LED lights and once it is dark he puts on quite the show. It was fun to sit and watch him as the sun went down.

When we were first married, Les worked for the Detroit Water Department so when we discovered the Shreveport Water Works Museum we had to visit it. 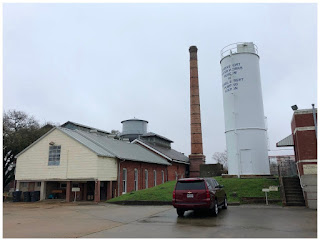 The McNeill Street Pumping Station opened in 1887 as the city's first water plant, it added filtration in 1890, unusual technology for the time period. In 1911 it was among the earliest facilities in the nation to use chlorine in the treatment process. The steam pumps were not fully retired until 1980. 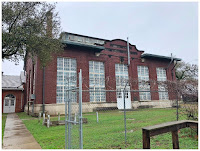 You enter in through the Machine Shop, where you see various pieces of equipment that were used. 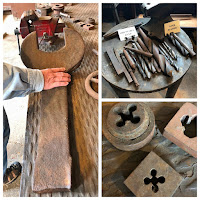 This was an important part of the plant as many parts had to be fabricated here after manufacturers quit supporting the machines. Have you ever seen such a big wrench before? 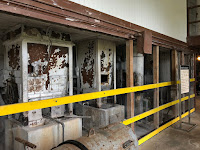 This is also where the chutes are where the alum and lime feed were mixed and added to the raw water as it headed to the settling basins.
The Steam Whistle once sat on the roof of the High Service Pump Room. It was manufactured in the early 1900's in Cincinnati, OH by the Lunkenheimer Company, which is still in business today.

It is a No. 446 Fire Alarm Whistle and they sold for around $100. It was rarely used and only for fires or air raids. There is another whistle above the Boiler room that was used during the day to note milestones and at 9pm for the teenagers curfew. 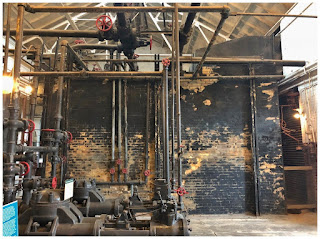 The Boiler Room is part of the original 1887 structure. All of the water pumps in the plant were powered by steam engines, and all the steam came from here.

The gold eagle and nameplate were a trademark  of the manufacturer, the Heine Company in St Louis.

These boilers were installed in 1917 and were in use for 63 years until 1980 with only regular maintenance and one rebuild in 1938. 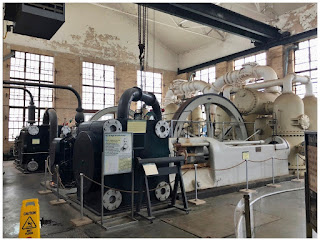 The Main Pump Room is where all the magic happens. The water begins and ends its journey through the purification process here. This room was added in 1921. It all started with the low service pumps, their job was to pump in the raw water and send it to the first step in the process.


This is the oldest pump, installed in 1898. They are mounted above shafts that are 47-feet deep. 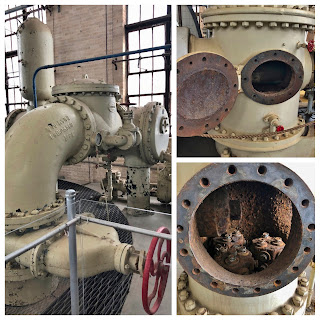 The cylindrical water pumps have been opened so you can see inside. 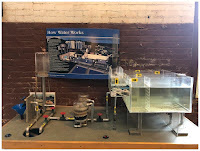 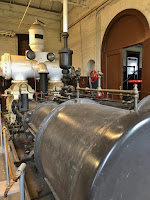 The High Service Pump Room housed the Worthing Steam Pump from 1900.  There are a number of small displays through out the museum showing how the operation worked.

The Laboratory is in an octagon shaped building that sits under the water tank and over the underground storage tanks. 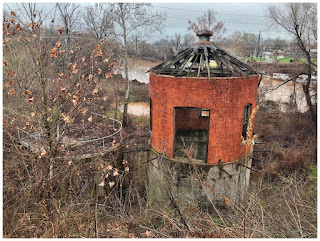 The raw water used here was pumped in from the Cross Bayou through a pipeline built in 1911. This building housed one of the pumps.


We continue our trek to Dallas with a quick stop in Tyler, TX. So the next blog will be our three stops in TX, which will include pictures from our nephews wedding.

Tips and things we have learned along the way.
~ Remembering dates can be hard - okay really remembering much of anything these days can be hard! 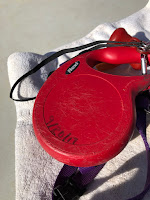 Back in November 2015 our tip was about how we remember when we install a new water filter so we know when it needs to be changed. This tip is about remembering dates for warranty issues. We use a Flexi retractable dog lead and if something should happen to them in a 2-year time period they will replace it. So we wrote the purchase date on the lead with a permanent marker so we will always know when we bought it.
Posted by Nancy B at 8:53 AM