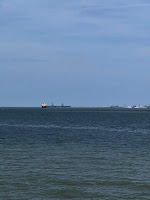 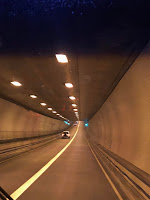 May 20, 2018 was moving day to Williamsburg, VA. The end of our drive took us not only across the James River on I-664 but it also took us under the river

Williamsburg Campark was home for a week.
It is a very large park but most of it is no longer in use. The property is owned by the Williamsburg Pottery Company and they are trying to sell it. It was developed in the 70's as an Air Stream Park. 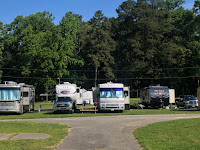 For the first few days our site was nice and wide, until they moved people into the sites on both sides of us. Then we were a little cramped. We weren't home much so it wasn't all that bad.
Our site was a grass pull through and level. We had full hook-ups and a picnic table. The park is well maintained and quiet. The pool is small but clean, and there are no chairs or tables around it. There is no laundry on site and we didn't use the bathrooms. The WiFi was decent. Verizon signal was strong. We paid $27.75 a night with our Passport America discount. 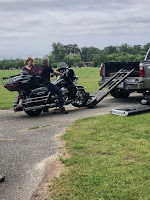 Jim and Sharon are one couple we met at this park. They are just starting their full time adventures.
We sat and talked with them for quite awhile and we got to see how they travel with their motorcycle. The automatic ramp is a pretty cool.

We were just minutes from Colonial Williamsburg. You can spend the whole day wandering the the village and seeing all the sites without spending a penny.

There is no charge to enter, only if you want to tour inside the homes and buildings, or take a carriage ride. We think it is wonderful that places do this so everyone can enjoy it without worrying about the cost.
The Colonial Williamsburg Foundation is a private, not-for-profit education institution. It started in the late 1920's when Rev. Dr. Goodwin, pastor of the Bruton Parish Church shared his dream of preserving the history of the city with John D. Rockefeller Jr. More than 80 of the structures are original buildings. Dozens of people live in some of the historic homes, 75 of the houses are rented through the foundation and the people either work at Colonial Williamsburg or at the nearby College of William and Mary. That would certainly make for a short commute.

The entrance bridge into the village is lined with metal plaques noting a time in history. They line both sides of the bridge and the history goes back in time as you enter the park,

and forward in time as you leave the park. We loved the saying on the last marker. "What difference will you make?"  It is a very interesting start and finish to your day.

The Great Hopes Plantation is a recreation of a typical Virginia plantation of the 1700's. 90% of Virginians, both free and enslaved lived on farms similar to this one. The average plantation was 100-200 acres and primarily grew one crop, mostly tobacco, for sale and export. Any food grown was strictly for the family and workers. 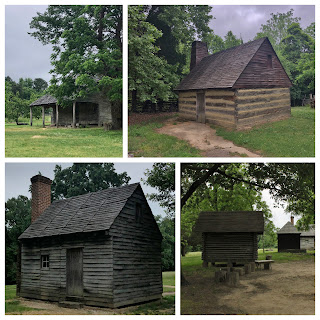 On these smaller plantations the planter and his family worked along side any enslaved workers.
Most plantations consisted of the planters house, a modest structure (still to be built here); a tobacco drying house (top left), sometimes the largest building on the property; a kitchen house and smoke house (bottom row); and slave quarters (top right). The walkway that takes you through the exhibit is lined with informational signs describing what life was like here.


The Governor's Palace was home to five Royal Lieutenant-Governors, two Royal Governors, and the first two Governors of the Commonwealth of Virginia, Patrick Henry and Thomas Jefferson. 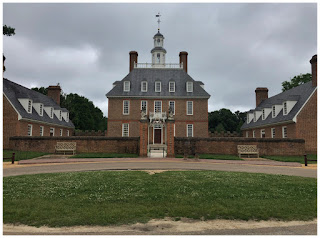 Construction of the palace was completed in 1722, and was destroyed by a fire in 1781 while it was being used as a hospital for Americans wounded at the battle of Yorktown. It was reconstructed on its original foundations in the 1930's, and is furnished as it was when it was home to the last British Royal Governor of Virginia, John Murray, the fourth Earl of Dunmore. 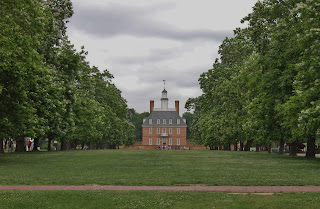 Each side of the Palace Green is lined with houses and storefronts, some set up like they were at the time and others set up for today's tourists.

The Bruton Parish Church is still an active church with weekly services. It has quite the history. It was first built across the street in 1684 and very quickly became inadequate as the congregation grew rapidly. In 1706 the current church was built and prospered for many years. By the end of the Revolution the church was barely surviving and the building fell into disrepair. In 1862 it served as a hospital for Confederate soldiers.  In the late 1820's an attempt to "modernize" the building left it unrecognizable from its glory days.  In the early 1900's restoration started on the church to bring it back to its original status. By 1939 the complete renovation was done and it is now an authentic replica of the original church. 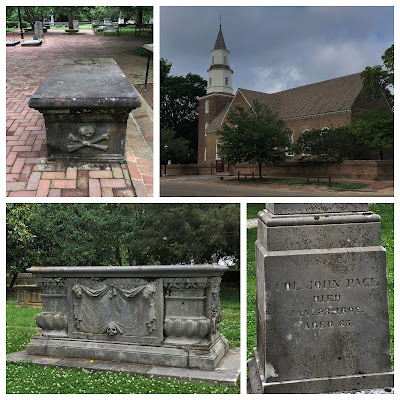 It is surrounded by a cemetery with graves dating back to the late 1600's. Many of the tombstones were repaired during the reconstruction. Colonel John Pace, died in 1692, it is the oldest to date that we have seen in our travels. Oh, to think what life was like for this person? 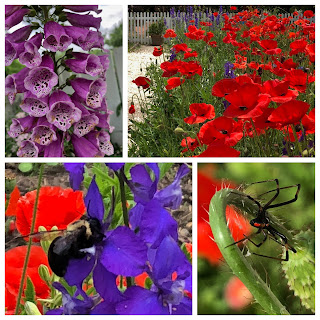 The Colonial Gardens are beautifully laid out, with flowers and herbs. You can actually get your hands dirty and use tools from the time period. The poppies were a favorite for us, we used to grow them at our first house in Detroit. The spider was a fun find.

The Courthouse and Market are directly across the street from each other. We met a couple from Ann Arbor, MI while at the Market, and their gentle giant Obie. 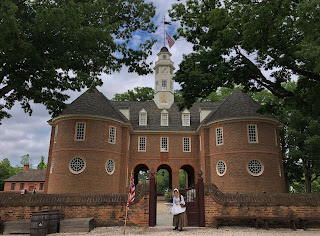 The Capitol Building is not nearly as impressive as the Governors Palace but not too shabby either.
The House of Burgesses of the Colony of Virgina met here from 1705, when the capitol was relocated from Jamestown, until 1779. Two buildings served the colony on this site, the first from 1705 to 1747, when it was destroyed by fire. The second from 1753 to 1779.
This reconstruction, built in the early 1930's, is of the first capitol building.

The College of William and Mary was founded by King William and Queen Mary II. It is the second oldest institution of higher education after Harvard. Our third, fifth and tenth presidents, Thomas Jefferson, James Monroe and John Tyler along with many other key figures of the day attended the college.
There is a statue of Thomas Jefferson on the campus that is fondly called the "Dead-beat Student". We don't know about dead-beat but the pose could be of any current college student.
There is also a statue of James Monroe. 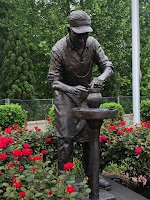 Two other roadsides that we found in the area were a statue of Jimmy Maloney who started the Williamsburg Pottery Company and an interesting speed limit sign - do speedometers even show a 1/2 speed? 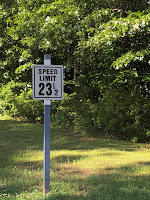 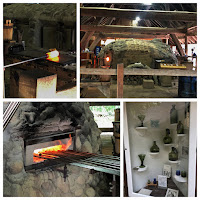 On our visit to Historic Jamestown we stopped at the Jamestown Glass House. They do live glass blowing demonstrations throughout the day and there is a nice selection of glass items to purchase. Nancy got a beautiful cobalt blue glass and we picked up a fun shaker for our friend Anne who shares Nancy's love of blue glass. 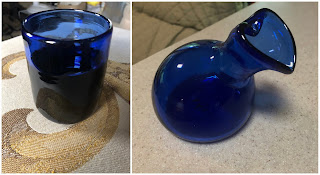 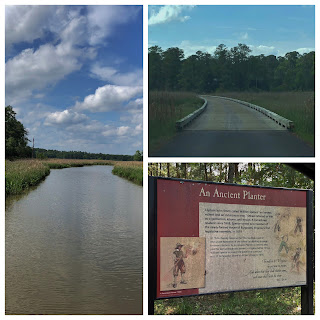 As you drive through the park it is hard to imagine living here as there is so much water everywhere. There are pull offs along the road that have informational signs about the history of the area. At Jamestown Rediscovery Village, you can see what life was like here back in Colonial days.

Part two will have more history and fun roadsides.

Tips and things we have learned along the way.
~ tip will be included in part two.