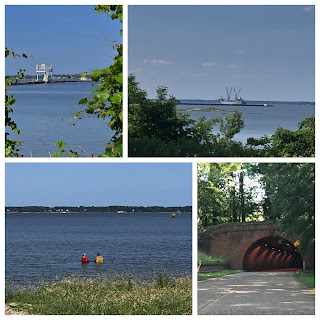 The Colonial Parkway reminded us of the Blue Ridge Parkway in Asheville and Hines Drive in Michigan. It is 23-miles long, stretching from the York River in Yorktown to the James River in Jamestown. There are stops along the way where you can hike, picnic or just learn a little bit of history.
Along the York River portion there are a couple of Naval stations and stops with beach access. A number of people were taking advantage of the nice day and cooling off in the river. 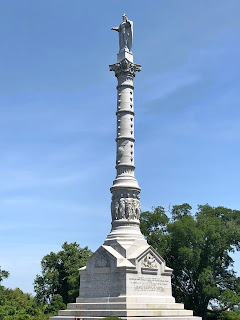 At the entrance to Historical Yorktown stands the Victory Monument. This monument was authorized on October 29, 1781 commemorating the surrender of Cornwallis to George Washington. Actual construction didn't begin for 100 years, it was completed in 1884. It seems the government has always moved slowly! 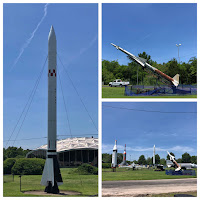 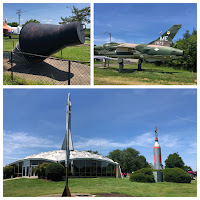 Hampton, VA is south of Yorktown and home to the Air Power Park. The park is filled with airplanes and missiles as well as the Mercury Test Capsule. 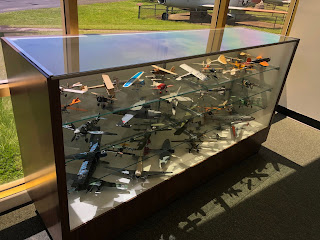 In the museum there are a number of cases of model airplanes, some donated from plane enthusiasts, others made by engineers. One room is dedicated to woman in space with a model of Colonel Eileen Marie Collins. She is a veteran of four space flights and she logged in over 872 hours in space. 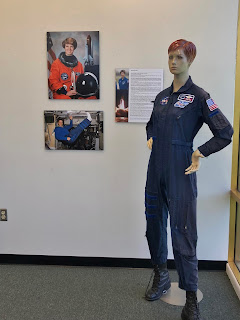 As we walked on the boardwalk adjacent to the park there were signs everywhere that said "Crabbing is Prohibited". When we got to the center of the inlet the signs made sense.
The ground was covered with hundreds of crabs. 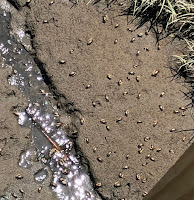 We continued on to Newport News in search of other oddities. We found a Muffler Man outside of an auto repair shop. Leif Erickson, a Giant Propeller and a Metal Horse reside at the Mariners Museum Park. 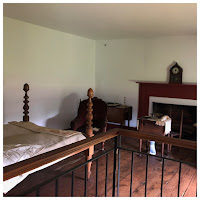 John and Virginia, our neighbors for the week were originally from Fredricksburg, VA and they encouraged us to visit there and we are glad we did. Of course the town is overflowing with history. Our first stop was at the Stonewall Jackson Shrine. Here you can see the actual bed that Jackson died in and some of the blankets are the original ones.

On the night of May 2, 1863 at the Battle of Chancellorsville he was mistakenly shot by his own men. His arm was amputated at the scene and was later buried nearby in a family cemetery. 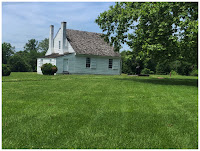 He was sent here to Guinea Station, it was the 740-acre plantation of  Thomas Chandler, which was well behind friendly lines and close to the railroad so he could be transported to Richmond after resting. He never made it to Richmond. Much of the railroad was destroyed and he was never strong enough to be moved. He passed away in the office building of the plantation on Sunday, May 10, 1863.

We enjoyed downtown Fredricksburg, there are a number of unique shops and of course plenty of places to eat, many of them in historic buildings. It makes you stop and think when you realize that George Washington walked these streets. Pretty sure they weren't as crowded back then.
You can do a walking or driving tour, with maps in hand from the well stocked Visitor Center. 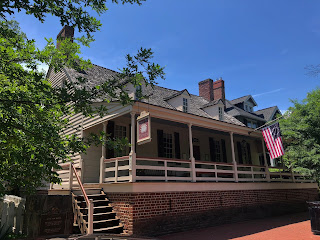 The Rising Sun Tavern was built around 1760 by Charles, George's youngest brother, as his home. It became a tavern in 1792 when it was purchased by the Wallace family.

The Hugh Mercer Apothecary was built in the early 1770's. Dr. Mercer treated the citizens of Fredericksburg with medicines and treatments of the time. Leeches, lancets, snakeroot, and crab claws were just some of his remedies. He used a variety of herbs, many of which are still growing in the garden behind the house. George's mother, Mary was among his many patients.

There is a large memorial for his mother, Mary Ball Washington and it is placed in front of Meditation Rock. Mary would go here daily to meditate and pray for George. 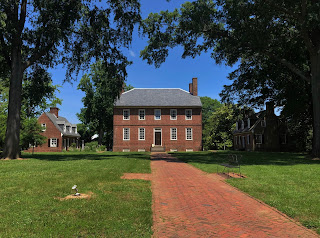 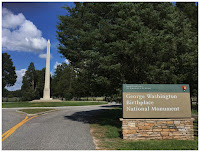 Our last stop of the day was at the George Washington Birthplace National Monument.
George was the first child of Augustine Washington and his second wife, Mary. He was born at their plantation on Popes Creek, on February 11, 1731, according to the Julian calendar, or February 22,1732 according to the Gregorian calendar. His great-great grandfather, John Washington, immigrated to Virginia in 1656 and began accumulating land. John's son Lawrence and grandson Augustine continued the practice. George's family was considered moderately prosperous. 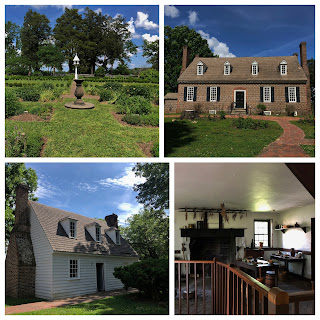 The foundation of the original house was discovered by archaeologists along with some silverware, buttons, and belt buckles. They have outlined where the house sat, it had been added onto over the years. The house was destroyed by fire in 1779.
The idea of the park was born in 1923. When the Memorial House (top right), the Gardens (top left) and the Colonial Kitchen (bottom row) were built it was believed that this is what the structures looked like on the plantation. They actually bear little resemblance to the original buildings. These early efforts to recognize Washington's birthplace led to the designation of this being the first historic site in the National Park System in 1930. Later, with the addition of the farm and farm workshop, this became a working colonial farm. 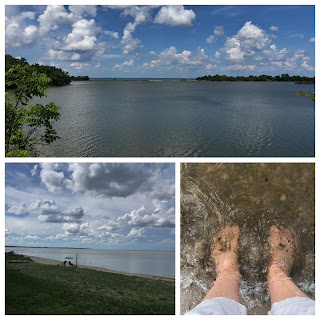 The plantation sits on Popes Creek, right at the opening to the Potomac River (top picture). At one end of the park there is a beach on the Potomac River, a popular place for the locals. Nancy of course had to put her feet in the river.

Washington was one of seven surviving children of Augustine's two marriages. He had two older half-brothers Lawrence and Augustine from his father's first marriage to Jane Butler Washington who passed away. His full siblings were Samuel, Elizabeth, John Augustine and Charles. Two siblings died in infancy and one half-sister Jane, died at age 12 when George was only 2
When he was 3, the family left Popes Creek and moved to Epsewasson, a plantation on the bluffs of the Potomac River. It would later be renamed Mount Vernon by George's brother Lawrence after he inherited it.
There is a small family cemetery on the property. Three generations of Washington's forebears are buried here. The first burials were made in 1668 when Anne, John Washington's wife and two small children died. Over the next thirty years twenty-nine more were interred here, including his father and grandparents. The cemetery today looks nothing like the one George visited during his youth. In 1930, the Wakefield National Memorial Association constructed the wall around the grounds, and consolidated the graves into a single casket, and interred the remains in the center vault. 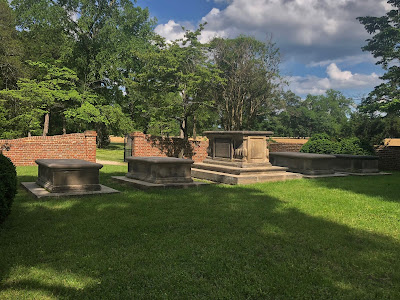 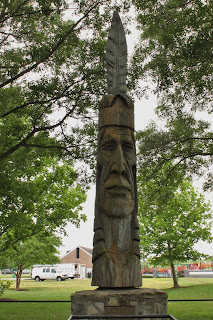 Virginia Beach is home to the Virginia, Peter "Wolf" Toth Indian. He sits at the entrance to Mt. Trashmore Park - yes that is really the name, and as you probably guessed it was once an active landfill.
This is the 19th carving on the "Trail of Whispering Giants", it was carved in 1976 out of Cypress. He is titled Indian Chief and he stands 24-feet tall. 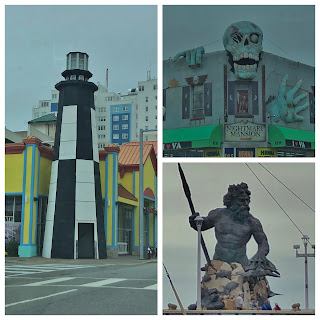 Virginia Beach itself is a little touristy for us but we drove through it and enjoyed some of the people watching. There weren't any shark head door entrances but there was a Light House and of course a Haunted Museum. Neptune guards one of the beach entrances.


The Edgar Casey's A.R.E. (Association for Research and Enlightenment) is in Virginia Beach. There is a bookstore and the grounds include a holistic health center and spa. 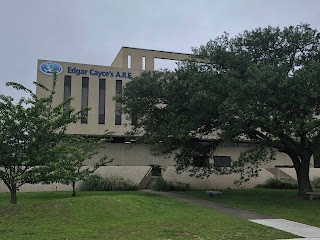 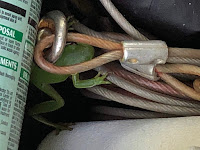 Les found another stowaway while setting up. This is the fifth frog we have found hitching a ride. We are not sure where they came from, we left four of them in Chocowinity, NC. This poor guy is all by himself and we hope he can make a home here! He hopped away pretty quickly once he was out of the RV. 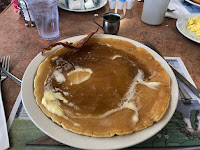 On our way to Colonial Williamsburg we drove past a restaurant called Astronomical Pancakes and Waffles. Well, with a name like that you know we had to give it a try. The pancakes are as big as the plates! They were pretty tasty too! No, we couldn't finish it all. 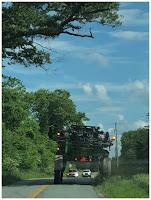 While driving home one day we came across a true roadside oddity, or I guess you would call this a on the road oddity. We were wondering if we could just drive under it! Luckily he pulled over so we didn't have to try.


Next up Clarksburg, MD and more American history. 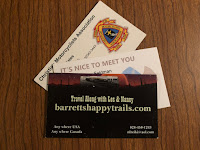 We have commented many times about the great people we have met on our travels. A number of them have become friends and we keep in touch with them. Before we headed out we had business cards made that list our name, email address, phone and blog address. This way we could easily share our contact info.
We are not the only ones, and it sure makes it easy to remember everyone. There are a number of places you can order cards, they can be plain or very fancy or anything in between. We used Vista Print, good quality and inexpensive.