We don't know what we were thinking, driving on Memorial Day. Good grief we are crazy. A drive that should have been a little over 2 hours, took 5-hours. 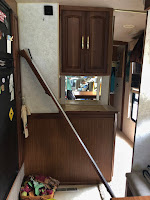 Not only did we have lots of traffic, we also had a little mishap inside. The edging to our living room slide out fell off! Apparently the screws had worked themselves loose. Fortunately it was a fairly easy fix and nothing got broken.

We were so glad to pull into the Little Bennett Campground. It did take us awhile to set up as the site was not even close to level. Once we were settled in we loved this place. The sites are set wide apart with lots and lots of trees in between, and it was super quiet. 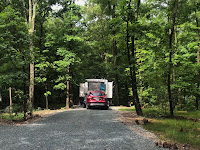 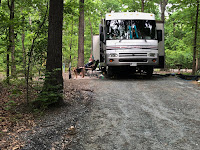 Site D-51 is a very long gravel pull through with full hookups. We did need to go and buy another section of sewer hose as ours was not long enough and getting the water turned on was tricky. There is a ring underneath the faucet that needs to be pulled down in order for the water to run, one of our neighbors knew the trick and helped us out. We had a picnic table and a fire ring. 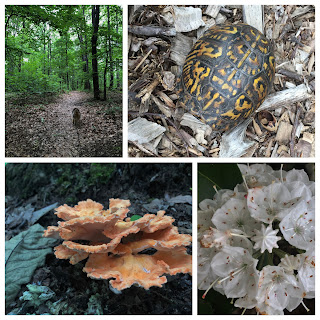 The city run campground has lots of activities for kids, a general store and trails for hiking that Mielikki loved. Les found a turtle on one of his walks and Nancy found flowers and mushrooms. The laundry and bathrooms were clean. There is no WiFi but our Verizon signal was strong. We paid $36.00 a night with our Passport America discount.

Frederick, MD is a small town just north of Clarksburg. It is full of art, shops, restaurants and history. This is actually the first town that Nancy has found in our travels that could almost be home - it still doesn't beat Asheville, but close. 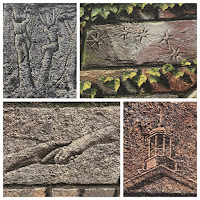 The Trompe-l'oeil Painted Bridge , or Community Bridge, is absolutely amazing. It is extremely hard to tell it is a flat surface, we had to keep touching it over and over again. It took William M. Cochran, a local professional public artist and trompe l'oeil master, and a team of assistants five years to created this illusion.
The "bricks" are so life like and there are a number of hidden pictures. Warning: A lot of pictures to follow!

It was hard to tell where the real bricks and stones start and end. 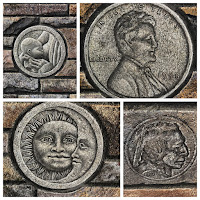 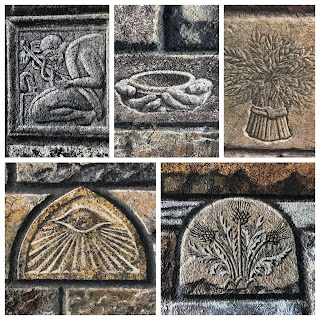 Most of the hidden objects have a special meaning to the artist and/or the community and history of the town. Some of the ideas for the symbols came from around the world.


We found a lot of them but know we also missed some as well.

The walls on each side of the river have different items painted on them. The north side has a statue and a fountain. The south side an iron gate, it looks like you can open it and walk right through.

You have to go into the Art Center in order to see the angel at the right angle for her to not look distorted. 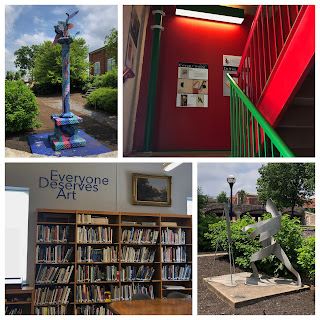 The shoe print was rather special to us as it reminded us of Nancy's dad. When Katrina was little he cemented his patio and made impressions in the wet cement of Katrina's gyms shoes, which were about this size at the time.

The Delaplaine Visual Arts Education Center is free and filled with great local and regional art. They are very active in the community and offer lots of classes and events. Their library is filled with how-to and art history books, Nancy could have spent the day in there.
Each level of the stairwell is painted a different vibrant color and the walls are lined with posters of art history. 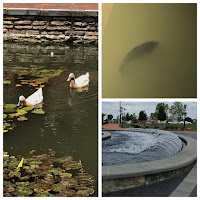 The river walk, Carrol Creek Linear Park, began as a flood control project in the late 1970's. Today it is a beautiful escape in the city.
The river is lined with art, places to rest, flower gardens, fountains and history. It is also home to some ducks and very large fish. There are businesses and residential buildings just off the walkway. 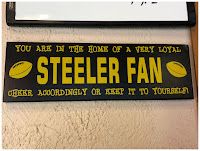 We fueled up with some coffee and bagels at the Bean and Bagel, the Steeler Fan sign made us think of our son-in-law, Steve. Then we headed off on a Historic Walk to find churches, homes, statues and more tromepe l'oeil paintings.


The 90-foot bell tower of the Calvary United Methodist Church houses eight peal bells. It is one of only forty in North America to have a tower like this. 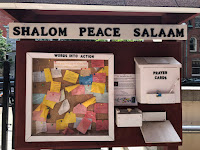 Next to the Evangelical Reformed Church is a Peace Station. There are post-it-notes available to write your answer to the question - "What will you do to make this world a more peaceful place?" There are also prayer cards, where you can request prayers or give thanks for prayers answered. 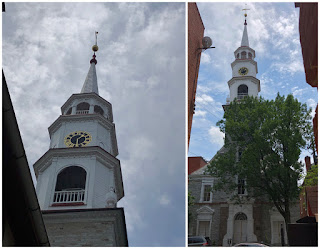 The stone tower of the Trinity Chapel is all that remains of the original church built in 1763. Its 1807 steeple holds the town clock. The original clockworks are in the Smithsonian Institution. 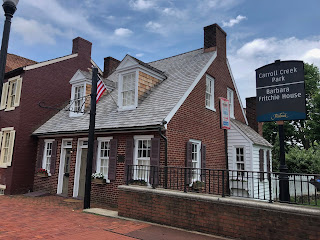 On September 10, 1862 the Confederate Army marched through Frederick. Many local Unionist showed their defiance by waving the Stars and Stripes at them. It is claimed that Barbara Fritchie waved her flag from the upper window of her house as the army marched by. She was immortalized a year later in a poem, The Ballad of Barbara Fritchie, by poet John Greenleaf Whittier. Historians have since pointed out that Jackson's army probably didn't pass her house. No one really knows for sure, but the poem helped to lift the spirits throughout the Union. 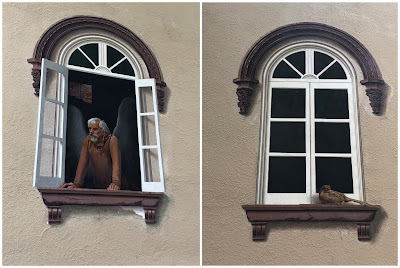 Earthbound is one of three "Angels in the Architecture" murals, also painted by William M. Cochran. 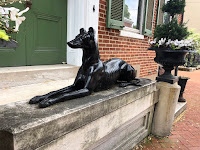 Outside the home of Dr. John Tyler sits a cast Iron Dog sculpture that almost didn't survive - he was stolen by the Confederate army to melt down for bullets, but fortunately he was saved. Dr. Tyler was one of the first ophthalmologists in the United States, and also one of first to perform cataract surgery. 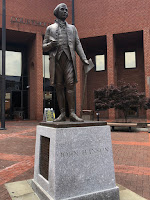 Mount Olivet Cemetery is where Francis Scott Key, the author of our national anthem, is buried. He passed away at his daughter's home in Baltimore on January 11, 1843, and was buried nearby. In 1855, Key's family moved his remains to a plot in this cemetery where he could lie as he wished in the shadow of Catoctin Mountain. In 1898 he was moved one last time. The Key Monument Association re-interned Key and his wife Mary to the front of the cemetery and erected this monument over their graves.

We found some other interesting headstones. Pointing hands on headstones and pillars, lots of crosses and crowns and very well preserved willow trees. 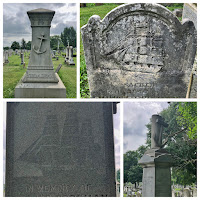 Anchors and ships were quite popular as well, and of course angels and statues. 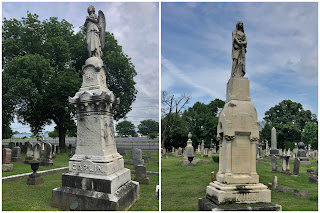 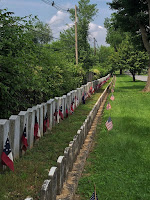 Frederick County was central to the Civil War military campaigns of 1862, 63 and 64, and Frederick City served as a major hospital for soldiers of both armies. Hundreds of men died here. Many Confederate soldiers could not be sent home and a number of them were unidentified and needed to be buried here. There are 275 identified soldiers and 29 unknown buried in the famed "Confederate Row." 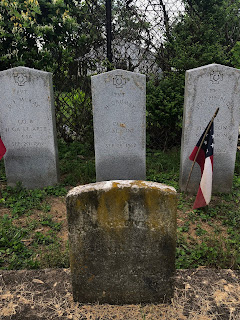 There are two rows, as new headstones have been made for each solider so their names and dates can be read.
Union soldiers that were originally buried here, were later honored with reburial at the nearby Antietam National Cemetery


While in Frederick we did some early Christmas shopping when we stopped in at the Dragon Distillery. Because of the dog we couldn't take a tour, but the owners were very informative and even let us sample some of their spirits. 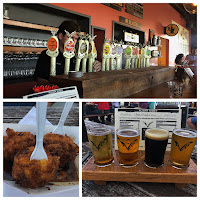 The Flying Dog Brewery is a quick drive down the road, in fact the two places have collaborated together for beer and bourbon.
They are dog friendly which always makes us happy. The beer was good, service was great and the Mac and Cheese Fritters from the food truck were amazing.


You know we went in search of Roadside Oddities.
In Frederick we found the Jug Bridge. It was an engineering marvel for early America. In 1800, traveling was not easy, you needed to ford rivers or use ferries when they were available and they could prove to be dangerous. 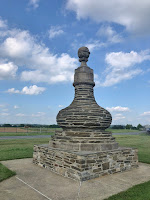 The Baltimore and Frederick-Town Turnpike Company revolutionized American roads, when they built the first leg of the National Road in 1805. In 1808, at the cost of $55,000 Leonard Harbaugh built a bridge in Frederick over the Monocracy River.
A distinctive stone "demijohn" (a popular bulbous, thin-necked bottle that often held whiskey), was placed on the bridge's east end. This gave the bridge its name. Rumors persisted that a real jug of whiskey was planted inside the stone version. The bridge, held by the Union Army, played a critical role in the Civil War.
The Jug Bridge stood well into the automobile era, but collapsed in 1942, leading to a new bridge being built. The Jug was moved down the road a bit to this location, to make room for the larger road and bridge. 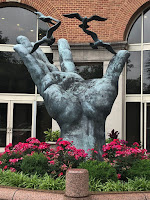 In Silver Springs, MD we found a Giant Acorn, the nut shaped gazebo has been used for picnics and weddings. 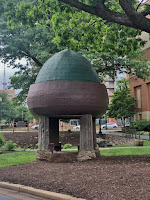 The Hand of NOAA sculpture sits at the entrance to the National Oceanic and Atmospheric Administration building. The hand is releasing seagulls to the ocean, representing the mission of the agency of protecting and recording the environment. 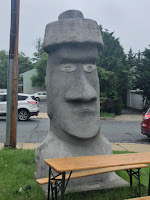 The Easter Island Head in Kensington, MD looks like he is ready for a picnic, which seems fitting as he sits right next to a food truck. 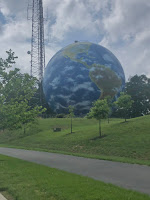 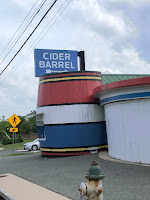 In Germantown, MD we enjoyed a little shopping at the Lancaster County Dutch Market and we found an old Cider Barrel that serves cold drinks in the summer and a Water Tower painted like the earth.


Francis Scott Key Fitzgerald (yes, he was named after is famous 2nd cousin, 3 times removed) and his wife, Zelda are buried in the St. Mary's Cemetery in Rockville, MD. Fitzgerald's life turned out much like his character in The Great Gatsby. He died penniless at the age of 44. At that time the catholic church refused to bury him. He was buried at a nearby cemetery with about 2 dozen people in attendance. There was no money for a headstone. Seven years later, Zelda died in a fire at the asylum she was institutionalized at. She was buried next to Fitzgerald. 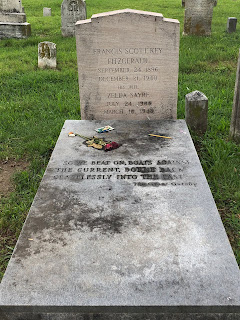 Thirty years later a local woman's group contacted their daughter, Scottie, and asked if they could erect a plaque. They approached the church once more about burying them there, and this time the church agreed to let them be moved to the Fitzgerald family plot.
Scottie chose the headstone and the inscription. The last words of The Great Gatsby, "So we beat on, boats against the current, borne back ceaselessly into the past."

Most of the other headstones in the cemetery had crosses, many with additional symbols. There were crosses and flowers, crosses with hearts and anchors and one that covered all their bases. It had a cross, flowers and a willow tree!

Tips and things we have learned along the way.
~ Tip will be in part two.