We headed to Quakertown, PA on June 14, 2018. Quakerwoods Campground was home for four nights. It is a large campground with over 150 sites, that include tents, cabins and RV sites. 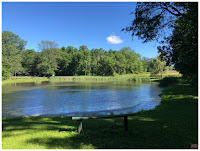 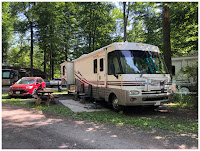 We were in Site 118, which is an end site, it was level with full hook ups. The park has a run down feel to it, a number of permanent and seasonal sites that are not kept up very well. There is a pool and a number of activities for kids. There is a stocked fishing pond at the front of the park. WiFi was spotty and our Verizon signal was okay. We paid $32.00 a night with no discount.

We picked this spot as a stop over to our next destination in New York, and to visit with a friend from Asheville. There really wasn't a whole lot to do in this area so Roadside Oddities were our main focus, and once again they took us to a number of small towns we would never have gone to otherwise. 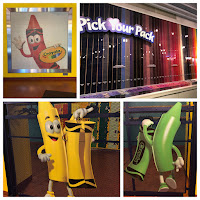 The Crayola Experience in Easton, PA was tops on Nancy's list of things to do. She has a rather odd obsession with crayons and only Crayola will do! You can take a tour and see how the crayons are made, but when we got there the next few tour slots were full, but Nancy was pretty happy to just wander the gift shop and read all about the process. She even picked up a few little gifts for the other crayon lovers in her family.

The alley way that boarders the building seems like a perfect fit. The one wall is painted to look like old store fronts. There is an art gallery, coffee shop and general store, along with a metal sculpture of the "Hear no Evil, See no Evil, Speak no Evil" Monkeys 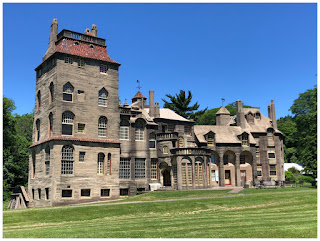 Fonthill Castle, in Doylestown, PA was the home of Henry Mercer (1856-1930), he was an Archaeologist, Anthropologist, Ceramist, Scholar and collector of early American artifacts. He built Fonthill from poured concrete, to keep down the risk of fire and because even though he was very wealthy, he was also very cheap. Upon his death he left his concrete "Castle for the New World" in trust as a museum for the decorative tiles and prints. He gave life rights to his housekeeper and her husband, Laura and Frank Swain. She resided in the house and gave tours until her death in 1975. The trust has kept the house open for tours since then. 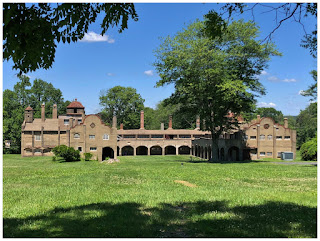 On the same property is the Moravian Tile Works, it is an active workshop. You can also tour the workshop and there is a gift shop with the handmade items for sale. Many festivals are held on the grounds throughout the year.

Across town is the third poured cement building that Mercer constructed. This one is the Mercer Cement Museum. It is filled with a collection of 40,000 objects documenting the lives of early Americans. There are 55 exhibit rooms and alcoves that display the tools or products of an early American craft, trade or occupation. 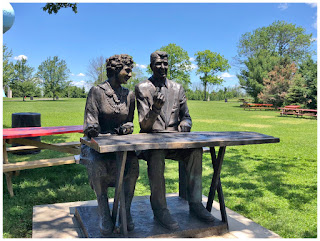 In 1984 President Reagan visited the Polish-American Festival held on the grounds of The National Shrine of Our Lady of Czestochowa, just outside of Doylestown. Reagan was quoted as saying "Thank God for Pope John Paul II", before biting into his potato pancake. In 2006, a local building contractor, Joseph Laudanski commissioned an artist in Poland to create the statue based on a photograph taken that day. He feared that the potato pancake in Reagan's fingers might block his face so he ordered it to be left out of the sculpture.  The lady sitting next to Reagan is the festival host, Jennie Gowaty.

Bethlehem, PA is home to the Peeps factory. Just Born is the ninth largest candy company in the country. Not only do they make Peeps, they also produce Mike and Ike and Hot Tamales here. 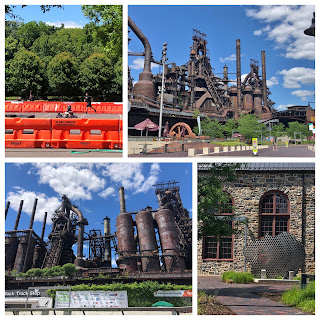 It is also where you will find the old Bethlehem Steel Works. The doors closed in 1995 after over 100-years of operation. The Sands Casino, operates a slots parlor in a reclaimed portion of the plant. This is the first of many projects planned for the future. The casino has paid to illuminate the intricate pipes and tanks at night with red spotlights, simulating the long extinguished furnaces. There is a stage for concerts in front of the building  and a go-kart track off to the side. 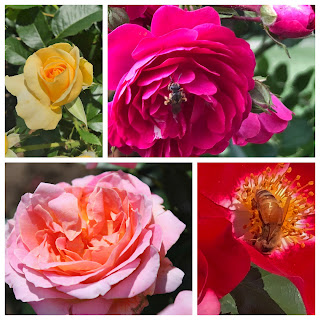 You may have heard about Allentown, if you are a fan of Billy Joel. We didn't see him but we did enjoy the Rose Garden while we were there. 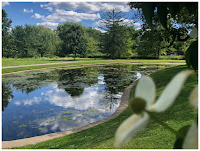 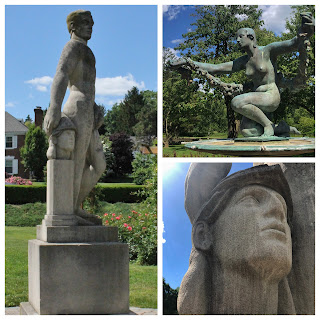 The Oldest Drive-In is in Orefield, PA on Shankweiler Rd. It is the oldest still-operating drive-in movie theater in America and the 2nd to be opened. It was opened by Wilson Shankweiler in 1934. The first to open was in Camden, NJ in 1933. The first movie was shown here on April 15, 1934. In researching April 1934 movies only one came up and it was released after the 15th. Only two other movies were released prior to April, both in January. Dinner at Eight with John Barrymore and Jean Harlow and a Shirley Temple movie called Pardon my Pups. Wonder if one of these was shown? 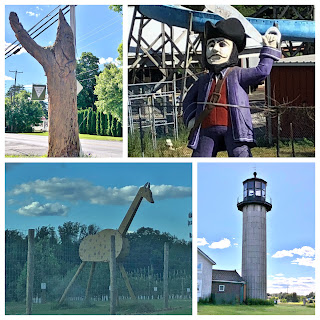 Head west a few miles down the road and you will see a Lighthouse, okay it's actually a silo that looks like one.

A Gnome Tree  lives in Kutztown, PA and the Peg Leg Pirate is in Breinigsville, PA. The amusement park he stands guard of is for sale if you are interested.
This random Metal Giraffe stands in a field in Spinnerstown, PA. 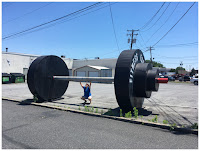 Quakertown had two oddities for us. Nancy tried flexing her muscles at a local gym, but the Giant Bar-Bells were just a tad heavy. 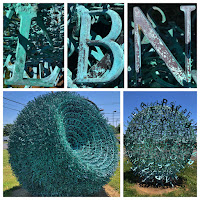 Tobin Studios is in an industrial park north of town.  The entire yard is filled with metal sculptures. We had so much fun wandering around all of them. 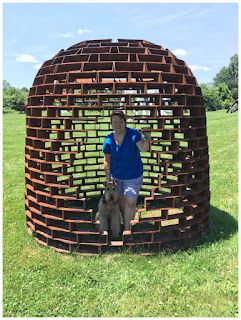 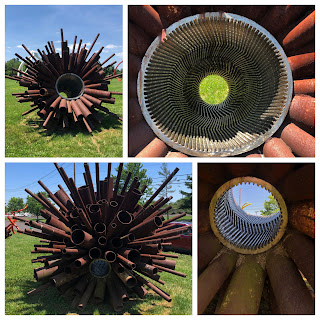 There are a few crosses that might make some people a little uneasy, but art has a way of doing that sometimes.

As mentioned we have a friend from Asheville who lives in the area. Kim Fox was one of our favorite bartenders at the Thirsty Monk. Seeing that is where we went every Wednesday for Pint Glass Night, the year our daughter got married we got to know the staff pretty well. Kim moved back home to PA right about the time we started our journey. We have kept up with each other via FaceBook. It was so so great to see her. 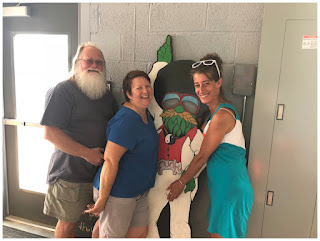 The first night we joined her at work at The Pub On Main Macungie. Then on Sunday we met her and her friend Matt for a couple of beers in her hometown of Emmaus. First at Yergey Brewery where we sampled some great beer, then at the Funk Brewery for some more yummy beer and great conversation. Thanks Kim for showing us such a good time.

Up next is Wurtsboro, NY for a visit with Franklin D. Roosevelt and more friends.

Tips and things we have learned along the way.
~ How can two people have so many shoes? 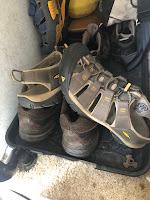 You would think a whole lot of people lived here based on the pile of shoes at the door. We are forever digging through the pile to find the pair we need. 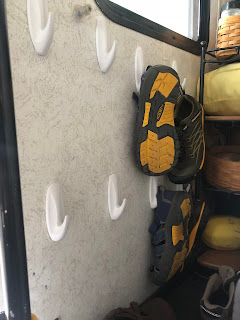 The solution to this is
3-M Command hooks. We have mentioned our many uses of these before. Now we use them to hang up our shoes. Keeping the shoe mat for just our hiking boots. Nice and neat and easy to get to.
Posted by Nancy B at 5:41 AM