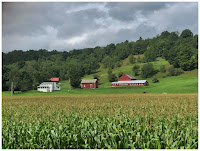 This trip to Dolgeville, NY on August 13, 2018 was the start of working our way to Michigan. The drive was so pretty. The farms surrounded by the mountains just seem so peaceful. 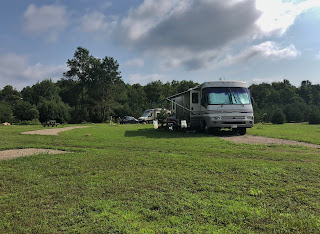 We stayed at the Spruce Creek Campground. It is a beautiful place, 20 acres in total. A mix of RV and tent sites, from primitive to full hook ups. We were in Site 88, a level gravel pull through with full hookups. The sites are a little wider than normal. There was no WiFi, the laundry room was very clean and the park is well maintained. 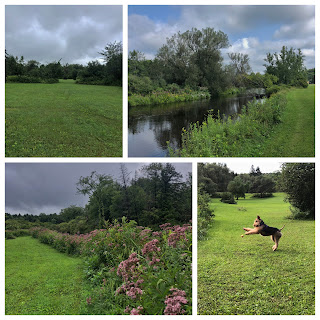 There are cleared paths for walking, some that take you along Spruce Creek. Lots of flowers and bird houses too.
Nancy and Mielikki had fun exploring every morning. The apple trees lost a number of apples after a storm and Mielikki had a blast playing with them. The storm also treated us to a rainbow. 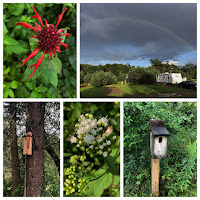 The Salisbury Center Covered Bridge was just down the road from the campground. 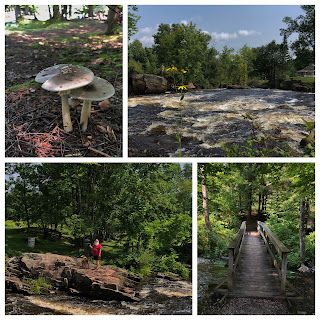 It crosses the Spruce Creek. Built in 1875 by Alvah Hopson, it is the only covered bridge in Herkimer County and one of only 29 in the state. It is a Wood Burr Truss bridge, 42-feet long and 16-feet wide.
There is a park on one side and paths on the other. Mielikki loved all the rock hopping. 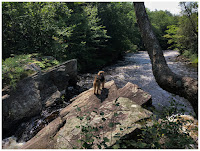 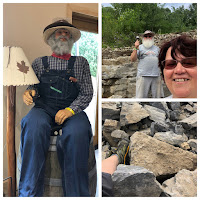 We went diamond mining one day at the Herkimer Diamond Mine.

Herkimer Diamonds are double-terminated quartz crystals. Various sized crystals are found in the rocks. It was a hot dusty day but a lot of fun. We only found tiny crystals but Nancy is excited to make a necklace from them. A fire in October 2017 destroyed their historic barn that housed their store and museum, they are working hard to recreate it.


What is now the Saratoga Springs Visitor Center started out in 1915 as a trolley station for the Hudson Valley Railway Company. The Beaux-Art design building was considered the gateway to the city. Many people traveled here for the medicinal properties of the spring waters.
With the increase of automobiles the trolley business slowed to a crawl and the station was closed. In 1941, New York State bought the building and turned it into a "drink hall", but not for alcohol. After entering through a turnstile, visitors could buy bottled, state owned mineral waters. Different waters were recommended at different times of day. The drink hall closed in 1965 and the property was deeded to the city, who later turned it into the Visitor Center.
This is another city we recommend spending some time in. There is lots to do, art galleries, shopping and dining and it is also home to the Saratoga Race Track.

The Yaddo Gardens  in Saratoga Springs, NY was a gift from Spencer Trask to his wife Katrina in 1899. With her name being Katrina only made us want to go more. 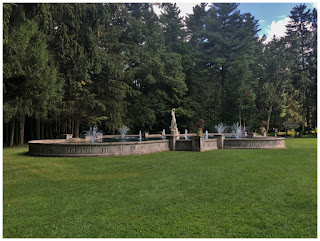 The gardens are free and open year round. As you approach the entrance you pass a beautiful fountain.
The lower section includes the rose garden and the upper section has a pergola with a woodland garden behind it. 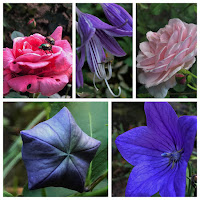 Both gardens have fountains. There are a number of statues throughout the gardens as well as benches and places to sit and enjoy the beauty.
The goldfish in the rose garden fountain looked as if they were swimming in the clouds. 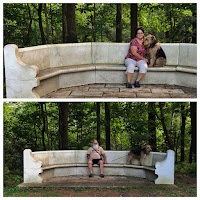 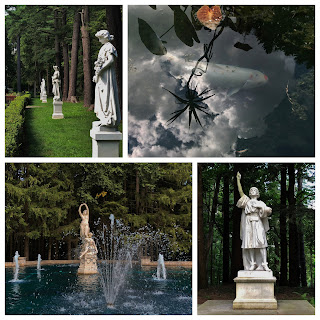 Stepping into the woodland gardens was like stepping into another world. Shaded and quiet with large ferns and beautiful wildflowers flowers, pretty sure there were some fairies as well. 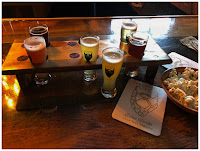 After the gardens, we enjoyed some refreshments at the Artisanal Brew Works. Good beer and good people.


Roadside Oddities ran from Superheroes to Muffler Men.
Leather Guy calls Vail Mills, NY home. He started off as a replica of Steve Alvord, who owned the leather shop he stood outside of. 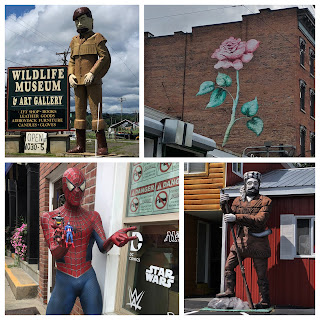 Then he was gone for awhile and Marty Greco bought him and restored him so he could advertise his log home business which also closed up. Now the 24-foot tall, 975 pound statue greets visitors at the Wildlife Museum.
Mountain Man is just a little north in Gloversville, NY. He also has been the greeter at a number of places that have gone out of business. Currently he is at the Adirondack Animal Land. The Rose Mural is on the side of a building in Albany, NY.
Nancy was so excited to get a picture of Spiderman in Johnstown, NY, along with her Batman, Spiderman and Captain America hanging out in his hand. 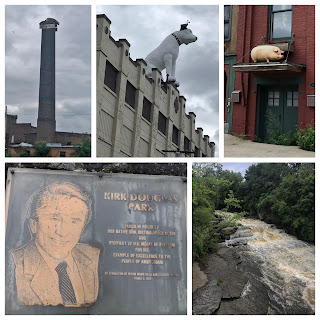 Kirk Douglas was born in Amsterdam, NY and the park named after him has a pretty waterfall. It is also where you will find the Car on a Smokestack.
Nipper the RCA Dog and the Pig over the door are in Albany, NY.

Albany is the capitol of New York so we headed there on a Saturday as it makes taking pictures so much easier. The capitol building is part of the Empire State Plaza.


Construction started in 1867 and was completed in 1899 at a cost of 25 million dollars. It was the most expensive building of its time. 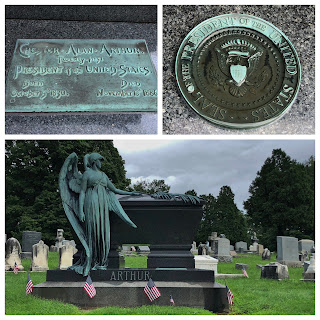 Chester Alan Arthur (1829-1886) was the 21st President of the United States. He is buried in the Albany Rural Cemetery just north of downtown.


Just north of Troy, NY is the Cohoes Falls on the Mohawk River. There is a park at the bottom of the falls with different levels of viewing points. The falls are 90-feet high and 1,000-feet wide. Niagara Falls are 830-feet wide. They range in height from 75-feet on the north side to 90-feet on the south end. Much of the flow is diverted for power generation. 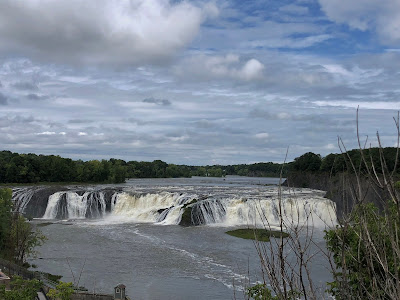 Up next is Bath, NY. The last stop before visiting family in Ohio.


Happy Trails to You!


Tips and things we have learned along the way.
~ Tank sensors
The black water, grey water and fresh water tanks have sensors in them so that you can tell how full or empty they are. Well, at some point every RVer complains about their tank sensors not working.
In August 2016 we told you about chemicals that are designed to clean and deodorizer your tanks. There are a few other things you can do to help keep your sensors working for a longer period of time.
1 - Don't dump your tanks too often. Waiting until the tanks are full or at least 2/3 full helps to keep things liquid and not drying up in the tank and on the walls of the tank. So when you finally dump everything comes out.
2 - Dump your black tank first, then your grey tank. This way the cleanest of the dirty water is running through your hose last.
3 - Use lots and lots of water. This really helps to keep things from drying out in the tank. We also occasionally will add water with a hose into the tank after dumping to rinse it out and then flush again. Back in December 2016 we talked about a spray hose that we got that helps to clean off the walls. 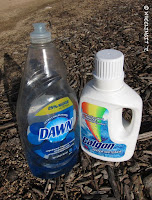 4 - Clean with the GEO method. No one really knows where the name came from but this home-made method has been around for decades. Use 1-cup Calgon Water Softener - not fabric softener and 1-cup Dawn Dishwashing detergent. Put this into your tanks just before a drive and dump when you arrive at the next stop,  or if you are stationary leave it until you dump again. If you are diving you can also add a couple of bags of ice cubes to help the agitation.