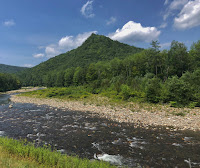 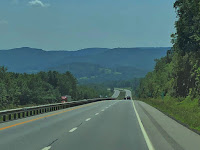 August 6, 2018 was moving day.
It was a beautiful drive around the mountains and along the White River.

The Dorset RV Park was home for a week. The park has 33 sites, and a large tent area. It is well maintained. We were in Site 18, a level, gravel pull through with full hook-ups. The sites are a little narrow, with a patch of grass, a picnic table and fire ring with a grill. WiFi was good, Verizon signal was strong. The laundry and bathrooms were clean. We paid $45 a night with no discount.


Once again the plan was to do some hiking. Dorset has a number of trails and a few that hook up with the Appalachian Trail. But, unfortunately Nancy's back didn't cooperate. She would love to say she hurt it again doing something exciting but the truth is she sneezed while bent over and could hardly stand up again! Good grief it's a bitch getting old.
So no hiking but we did have fun.

Just about a mile from the campground is a swimming hole at an old Marble Quarry. It was the first Marble Quarry in the US, opening in 1785. Nancy and Mielikki walked here one morning. Yes, that was a bad idea with her back but she did it anyways. Getting there early is the best time to get pictures without a ton of people around. Every time we drove past it was packed with people. It is a beautiful area, the water is actually on the warm side. We didn't swim but Nancy put her feet in. 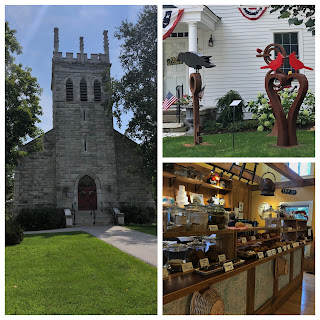 Dorset is a tiny town, mostly touristy with a beautiful church, a great General Store and some fun art galleries. One had metal sculptures out front, Cardinals, Les's favorite and a Raven, Nancy's favorite. We had breakfast one morning at the Rising Sun Cafe. Great food and service, we went back again for an afternoon treat another day. 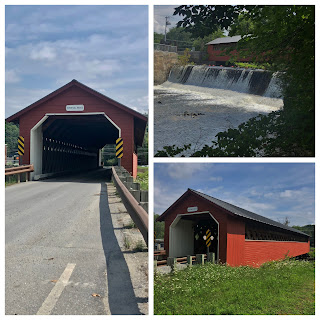 One day we drove south to Bennington, VT. We found two covered bridges. First up was the Paper Mill Covered Bridge, built in 1889 it crosses the Walloomsac River. It is a single span Town Lattice Truss structure, 125-feet long and 18.5-feet wide. Open to road traffic, it is a one lane bridge with the roadway width of 15-feet.

Down the river is the Burt Henry Covered Bridge. It is also a Town Lattice Truss bridge originally built around 1840, it was rebuilt in 1889. The bridge is 121-feet long and 18.5-feet wide, with a single traffic lane of 15-feet wide. There is a nice park next to the bridge which made getting pictures of the side much easier.

The American poet, Robert Frost, was born in California in 1874, and lived in many places including Europe before settling down in Bennington, VT. He taught classes in Ripton, VT at the Bread Loaf School of English for 42 years, and at the University of Michigan in Ann Arbor, MI for 7 years. Like many northerners he split his time between Vermont and Florida. He died in Boston in 1963 and is buried in the Old First Church Cemetery in Bennington.  One of our favorite passages of his is: "Two roads diverged in a wood, and I took the one less traveled by, and that has made all the difference in the world." 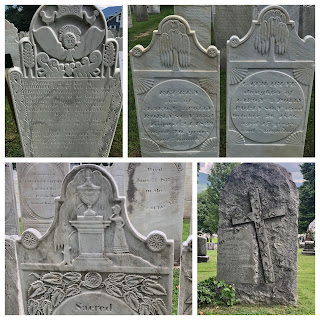 There are a number of other interesting headstones in the cemetery. Many with the Carved Faces that we first saw in Connecticut. Along with Willow Trees and Crosses.
The most interesting is the large boulder used for a family plot. On one side the name Loring is carved with four headstones in front of it, the oldest for Joseph Henry, 1853.
On the other side is the name Bingham, with three headstones. One for Loring Dewey Bingham. 1904, and another for Fannie Loring Bingham, 1922.

We popped into New York for a quick stop at the Big Moose Deli, in Hoosick. 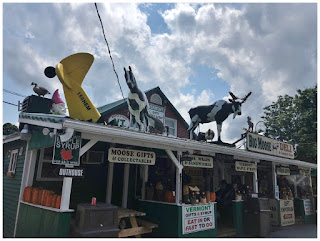 Honestly this is the only way we have seen moose since we have been in the northeast. Starting to think they don't really exist anymore. This Deli/General Store was a hoot. The outside has so many statues it was hard to know where to look first. We got a kick out of the fact that most are painted like cows - even the gnome. A few statues were left as is, of course Superman and Batman were some of our favorites and the Hot Dog was just strange! 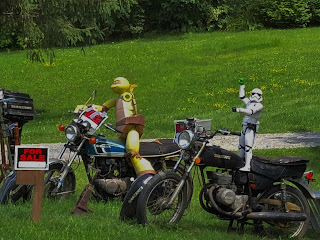 We had to get a picture of the motorcycles for sale. A Ninja Turtle and a Storm Trooper, wonder if they come with the bikes.


Could you resist stopping at a place called the Chocolate Barn? Well, we couldn't. It's even painted chocolate brown. It is a combination gift shop and chocolate store. 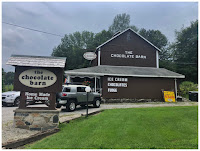 On our way to Bennington we stumbled upon the Southern Vermont Arts Center, in Manchester. It is a multi use center. The grounds have trails for hiking and cross country skiing. There are multiple art galleries, artist studios, a performance center and classes are taught here. Plus, a Japanese restaurant. 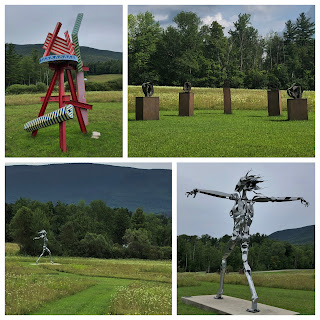 The Giant Running Woman caught our eye as we drove by. Les turned around and we drove through the park, it was a little rainy that day so we choose to come back another day to walk the grounds. 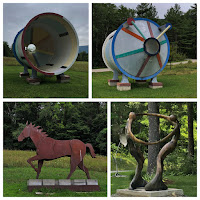 There are paths cut in the grass from one art piece to the next. The sculptures are from all different mediums, wood, bronze, metal, and iron. 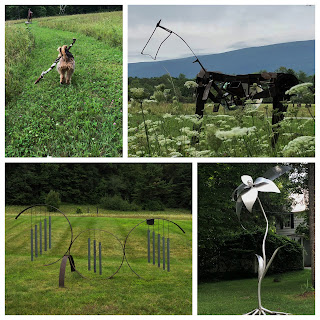 Even Mielikki enjoyed them, okay she probably enjoyed the large stick more than the art but...

We headed back to Bennington a few days later for the Hemmings Classic Car Show. Well, when we got there we found a sign out front of their gas station and gift shop that said the show had been canceled due to road construction. We weren't the only ones who didn't get the memo. 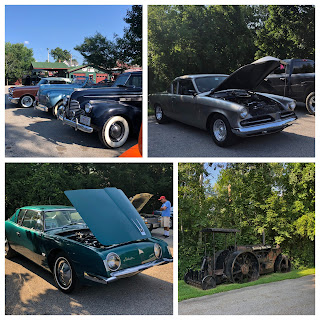 A lot of cars showed up, some not very happy that it had been canceled. There was nothing on Hemmings website about the cancellation and many had come quite a distance for the show.
We enjoyed seeing the cars that were there but disappointed there weren't more and that the Hemmings Museum wasn't opened as advertised. The garage door to the museum has a fabulous Trompe-l'oeil painting on it. 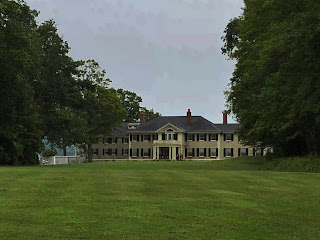 Robert Todd, the oldest son of President Lincoln and Mary Todd Lincoln had a house in Manchester, VT. He became very fond of the area and this was his summer home for over 20 years. He died here on July 25, 1926.


Equinox Mountain Road, or Skyline Drive as it is also called is a toll road that takes you to the top of Equinox Mountain, an elevation of 3,848-feet. We did not drive it but one day as we passed it there was a Vintage Car Race taking place. The link takes you to information about the race and the road.

The Stone Valley Byway is a portion of Highway 30 from Manchester to Salisbury. It is the road that our campground was on. The drive takes you through a number of small towns in the valley and past beautiful farm land. It was so picturesque with the mountains as a back drop.
The farms are actually how we had pictured Vermont to be. 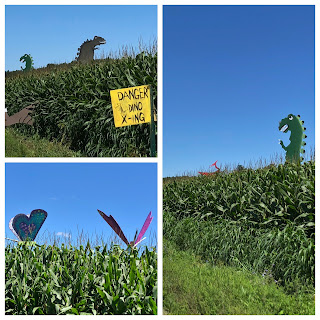 There were some Roadside Oddities along the way. This farmer certainly has a sense of humor! The Dino Crossing was a fun find, you would never expect to see Dinosaurs and Giant Butterflies in a corn field. 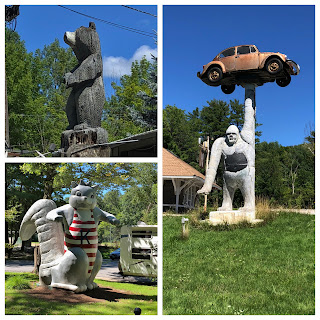 The Black Bear was outside a small general store that we drove by. The Giant Ape holding the VW is outside a now closed auto shop on Hwy 7. The Giant Squirrel that is ready for a swim greets you at a campground on Lake Dunmore, both in Salisbury. 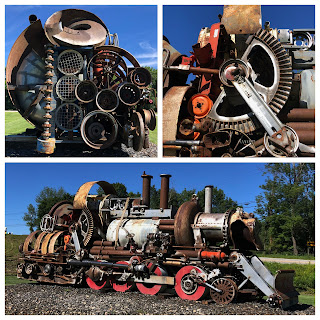 In West Rutland we found another Art Park. The Steampunk Train is what we came for and we were not disappointed with it or the rest of the sculptures.


"Hope" is just too cute in their rainbow overalls. 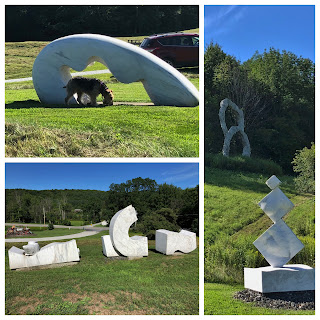 Like the sculptures at the Southern Vermont Art Center these are a mix of mediums. Granite, iron and metal. At the end of the road through the park is a large building - not quite sure if it is someones home or what it is. 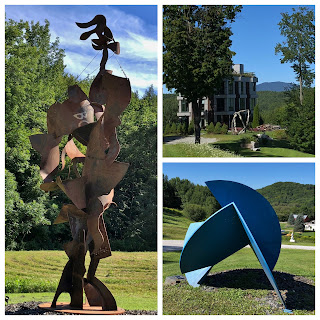 The marble "Dancer" was a favorite. You can feel the movement of the piece.

Up next is Dolgeville, NY where we went diamond mining in Herkimer.

Tips and things we have learned along the way.
~ Collapsible products save space
RV's and campers are notorious for their lack of storage place. But, there is help for that.

You can get just about everything in Collapsible form now. Coffee pots and tea kettles, pot and pans, wagons, bowls and buckets, plus more.