Who knew there was so much to do in Indiana!

The last blog post covered food, drinks and the odd places we visited, now we will share the wild side.

While in the Wabash area for a haircut and donuts we went to Salamonie River State Forest in hopes of seeing some eagles. Sadly we did not, but the spillway and river and were very pretty.
We were able to walk quite a ways down the river - found some interesting flowers and tree roots. 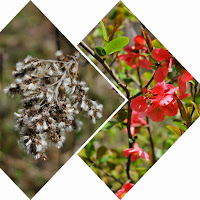 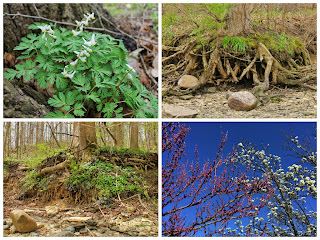 Mielikki loved running in and out of the water and playing with the rocks.

There is also a Nature Preserve in the state park so we hiked off the donuts we ate. As we entered the trail we saw this sign and of course immediately thought 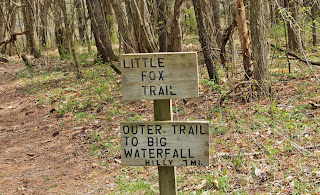 of Katrina and Steve. Then we chuckled when we saw the sign to the Big Waterfall - really how big can a waterfall be in Indiana? So, of course we headed that way to find out. It was a very pretty fall, but by North Carolina standards not all that big. 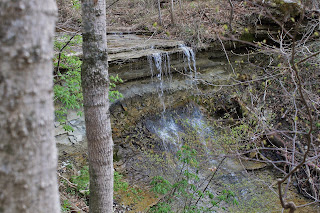 We stumbled upon a few other interesting things on the hike - actually stumbled once or twice too. An electrical pole that lost its battle with Mother Nature. Beautiful fields of flowers, creeks, a chimney, old farm house walls, and of course tree stumps. 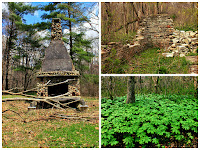 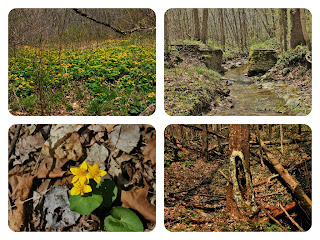 The ever present flight of stairs, a pretty blue outhouse and a trail that sounds like it could be dangerous. 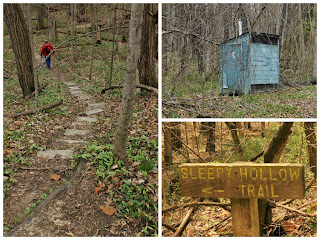 It had rained the day before so the trail was pretty muddy, which of course meant that the puppy was very muddy. We found a 24 hour, Do-It-Yourself dog wash. Big metal tubs with a shower hose attached at one end and a ramp at the other. Of course, Mielikki was terrified and wouldn't walk up the ramp. Les got her in the tub and $4.00 later we had a clean and fluffy puppy, they even have blow dryers. She hated every moment of it. She was so unhappy she wouldn't even eat her treat. We were thrilled that she felt and smelled so much better.

We discovered a covered bridge in Roann and a mill. While Nancy was in the field taking pictures of the bridge two ladies walked through and yelled down and asked what she was taking pictures of - she replied the bridge and they both started to chuckle and said Oh - duh! You do take for granted things that are always around you.


On the recommendation of Mike and Dawn, we went to Turkey Run State Park to do the covered bridge tour. There are over 30 bridges in the area, most of which you can still drive across. We got to nine of them. 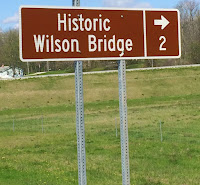 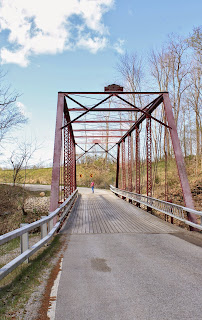 On the way there we came across a sign for the Historic Wilson Bridge. It was built in 1898 by the Lafayette Bridge Co. Seems fitting that it is red. 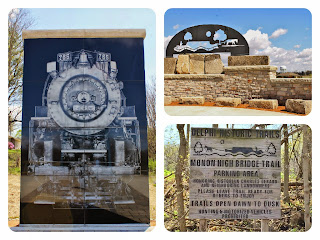 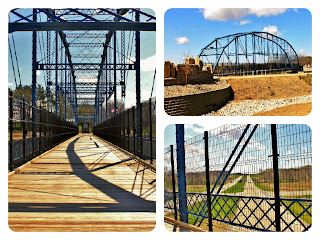 While stopped at the Wilson Bridge, we came across a trail to the Monon High Bridge. It is a walking bridge over Highway 31 and it connects the Wabash and Erie Canal Trails, which follows the old rail road right-of-way.

It was a little chilly but a beautiful blue sky and sunny day. 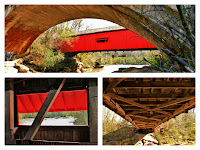 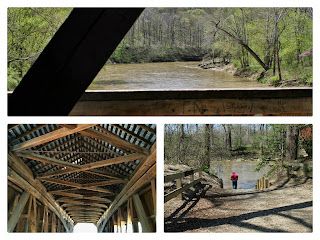 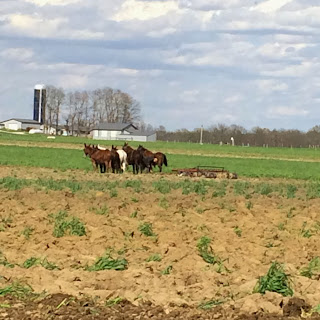 While traveling the back roads to all of the bridges we came across an Amish farm, the farmer was plowing the fields using a team of six horses to pull his plow.
This scene confirmed the feeling Nancy has been sharing all week while driving along all of the back roads There is such a mix of old and new here. Old farms being run with the latest equipment to farms being run like they were a 100 years or more ago. We joke about the flat lands but there is some comfort in them as well. Looking across the fields and seeing small sections of tress clustered around a home, protecting it from the winds and sun brings a sense of peace with it. 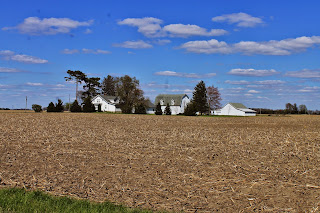 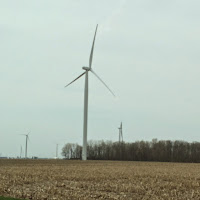 The other thing that has fascinated Nancy all week is the giant windmills, or wind turbines if you will. There is a large wind farm just north of Indianapolis. Nancy's imagination gets carried away every time we drive by it. She sees them as large giants, crossing the fields, scooping up animals and giving them rides. They seem rather majestic to her. 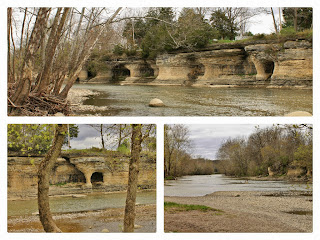 Seven Pillars is just down the road from our campsite, and recommended by everyone we talked to. They are a series of stream-carved sandstone bluffs, some 25 feet high. The water has created small alcove-like rooms looking out on the Mississinewa River. This was a significant gathering place for the Miami Indians. If the river had been a little lower and a lot warmer we would have crossed and explored them a bit more.

Heading indoors but staying on the wild side, we visited the Circus Museum in downtown Peru. 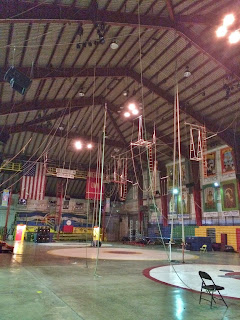 What an incredible place. They have a large arena where they put on a full circus during the Circus City Festival held every July. This years is July 11 - 18th, with a number of events leading up to the circus. The performers are children ages 7 - 21, who are trained by an all volunteer staff. They also have a room filled with memorabilia from years of circuses. Old photos, costumes and props are on display. 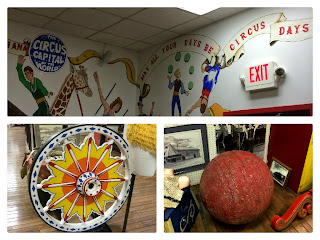 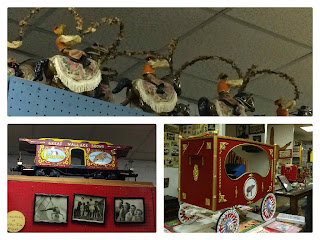 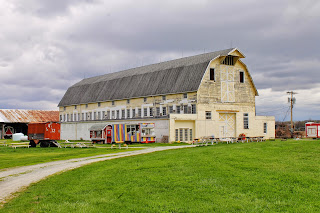 Just outside of town there is the Circus Hall of Fame, it opens on May 1st so we couldn't go in, but we were able to walk the grounds. It is fun imagining what the town must have been like when all of the circus performers were there during the winter. 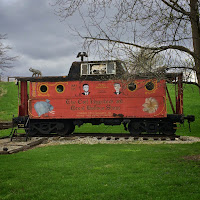 A few last random thoughts and pictures from Indiana.

We discovered we still had ants, a lot of them. So every cupboard was emptied, everything in them cleaned, the cupboards then sprayed and let sit for hours then everything put back. The edge of every room was sprayed as well. We have a super clean RV and hopefully no more ants. 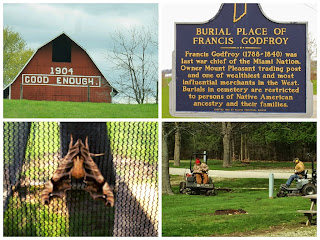 Once again we saw historical markers, these in reference to the Indian tribes from this area.

This tree moth lived on our screen tent all week.

Cutting grass in the rain is something that has always puzzled us - this is one reason why you shouldn't. This lady got her mower stuck half a dozen times in the wet muddy grass and had to be towed out.

We so wanted to get a look inside this round house and barn.

These cement pillars are every where. They are next to the fields - in some cases the current owner is using them, but most are just random pillars here there and everywhere. Our guess is they are old fence posts. Anyone else have a guess? 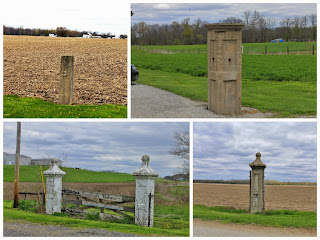 Nancy is so glad she brought her sewing machine along, (all her paints and stuff too), she was able to use drapes from our house to make black out curtains for the bedroom that hang perfectly under the valances. Love a really dark room for sleeping.


Indiana was great fun, even with the issues we had. After 30 days on the road we still want to keep going. Nancy has gotten her down days to rest and create which make her a much happier person. This in turn makes Les a happier person. So a win-win.

Next stop is Holland, MI so until then...

Tips and things we have learned along the way
~ again, if you see some ants assume you have many many more and spray everything before you fill your RV up with your belongings - it will make your life easier.
~ bring some of your favorite things with you, if you have a hobby, don't stop doing it. You may have to adjust it somewhat but be true to yourself. You will be happier for it.