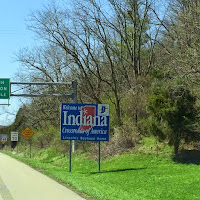 First stop was in Brookville, IN. We stayed at the Mounds State Park on Brookville Lake. The trip here from Newport was rather uneventful. Mielikki handle this trip much better, she laid under Nancy's feet the whole time and wasn't nearly as scared. We are taking this as a good sign. When we pulled in, there were only a few other campers, it didn't take long for the weekend warriors to arrive and it was a full house until Sunday afternoon when there was only 3 of us left. The park was beautiful with lots of hiking trails and trees.

Our first adventure was to explore the entire park. We started at the overlook, from here you can see most of the lake and the entire dam as well as downtown Brookville in the valley.

Next stop was the dam itself. We were able to walk across it and see down into the spillway and out across the lake. There were a dozen or so turkey vultures circling the park below and landing on the railings. One posed for us with its wings spread out for the longest time.


To get a closer look at the spillway we drove into the park it runs through.It was amazing, the power of the water coming through it was pretty spectacular to watch. As the water was spilling out it was hitting a levee and coming back onto its self and creating large crashing waves. The roar was so loud we could hardly hear each other talk. 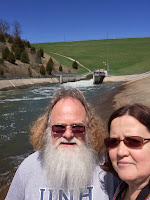 We always think of Indiana as being very flat, guess that comes from entering it from the Michigan border all the time. We were pleasantly surprised at all of the rolling hills and valleys.
Brookville is in many ways just like any other small town, except this one is full of ceramic Roosters - more on that in a bit but first, lets talk food. We had lunch at the Ye Old Shack, which used to be a wooden cabin (there are still some of the walls from the cabin) that served the canal people as they came through town transporting goods south down the canal. They have really good burgers and nice large mason jars of sweet tea.
After all of the fun it was time for some mundane things like grocery shopping, which confirmed something for Nancy that she has always suspected - she is definitely a grocery store snob and is sad to admit a small town store just doesn't do it for her.
Continuing to explore the area we discovered Wolf Creek Habitat. They care for wolfs that have been rescued in the wild after being hurt or in some cases as cubs after their mothers have been killed. They do amazing work here and take very good care of the animals and it is truly something to be grateful for that there are people like this willing to dedicate their time and money to helping animals.They do make it possible for you to interact with the animals and Nancy's original plan was to do just that but choose not to as there were a number of people in the pen and it was a hot and sunny day so the wolves were pretty much sleeping.

We went from wolves to roosters. As mentioned earlier the town is full of large ceramic roosters, most businesses have one out front. They are painted, and in most cases to reflect the business. While taking a picture of "Ben Franklin" in front of an antique store an elderly gentleman shared with me why they have them. Brookville was in the Genius Book of World Records for having the largest serving of fried chicken and sponsoring a rooster helped to fund the dinner. We went into the antique store and the owner of the store shared more details. They hold a Canoefest every June and always serve fried chicken so in 2010 they decided to try for the world record and got it. They served the 1600+ pounds of fried chicken in an Osagian canoe, made special just for this occasion.They held the record until a year ago when KFC took it in Japan. In case your wondering, this years Canoefest is June 26 and 27 and claims to be the biggest canoe race in Indiana.

Another great little town just west of Brookville, is Metamora. It is only a few blocks long but they pack a lot in such a small place. Most of it was still closed when we were there as we were pre-season. One end of town is the grist mill, the mill actually works and you can buy ground flours there. 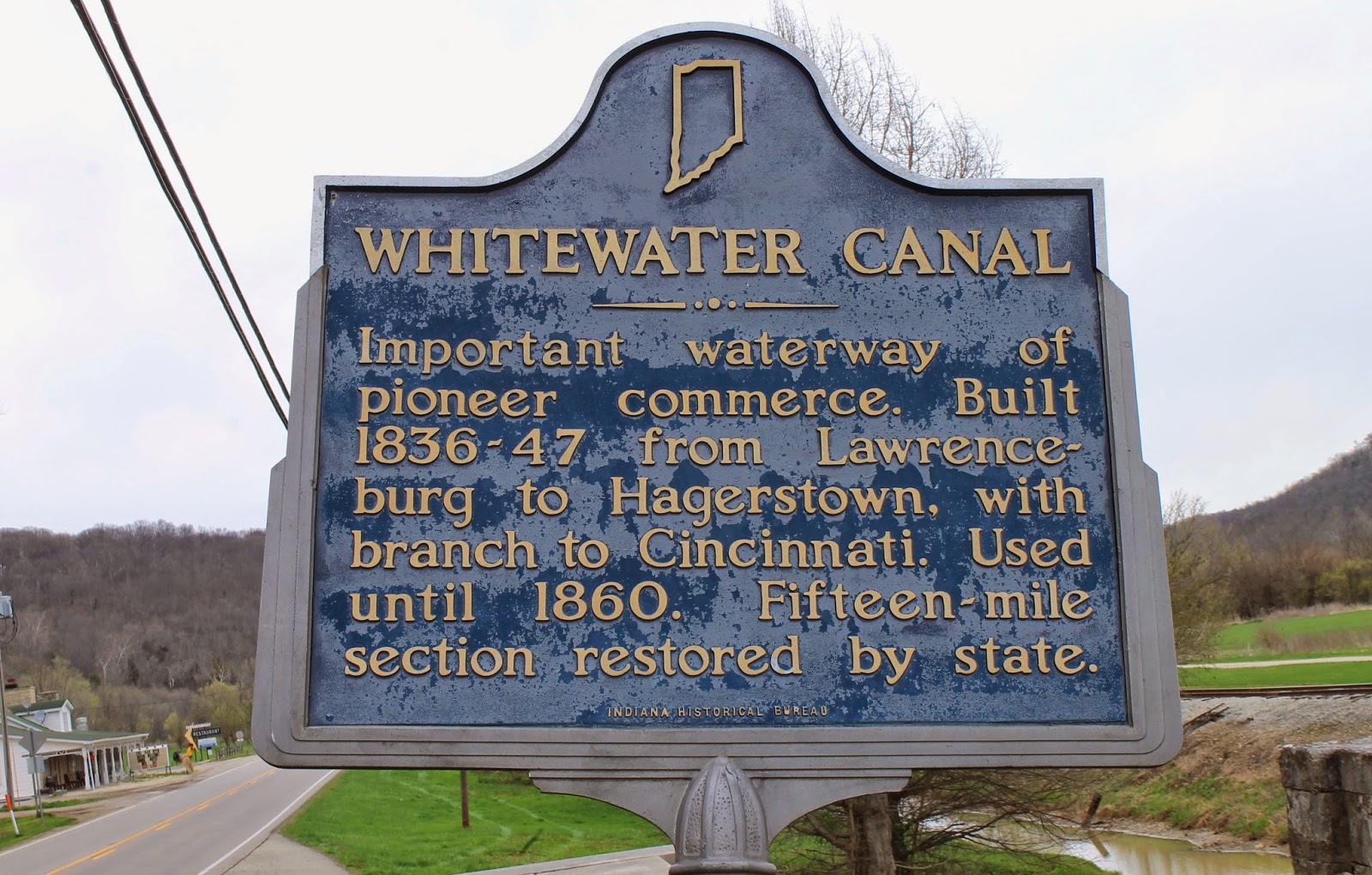 The other end of town is one of the locks that was used to control the canal, back in the shipping days. 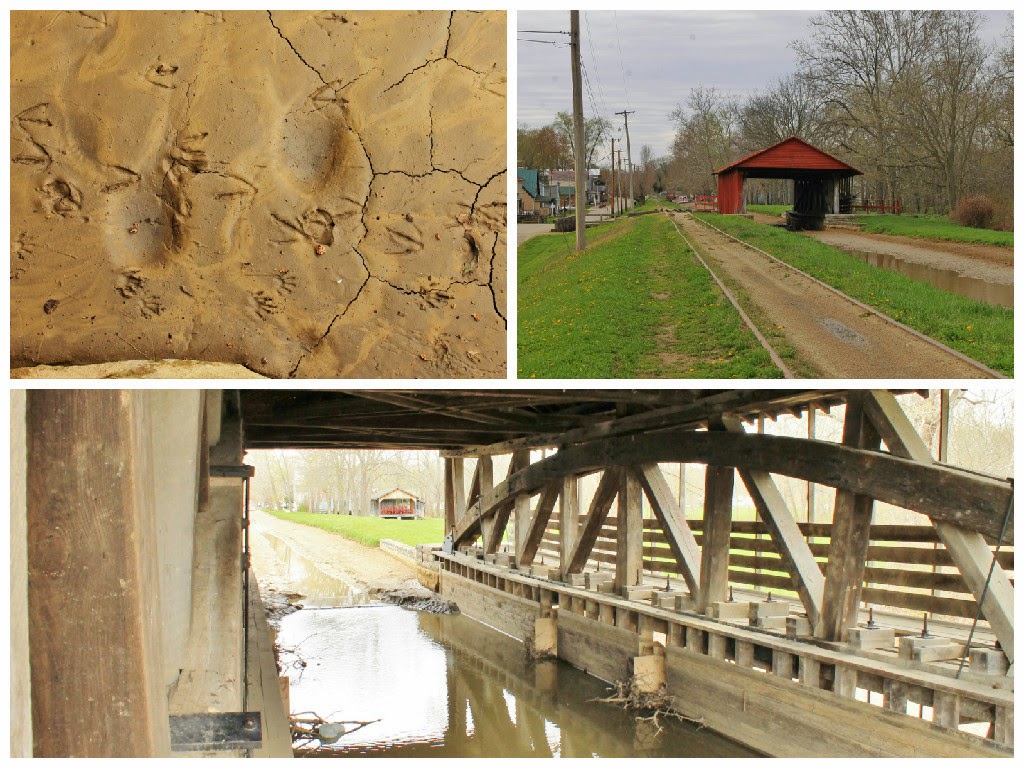 In between, the canal runs through the town. There is a wooden boat that you can ride on, that is pulled by a team of horses. 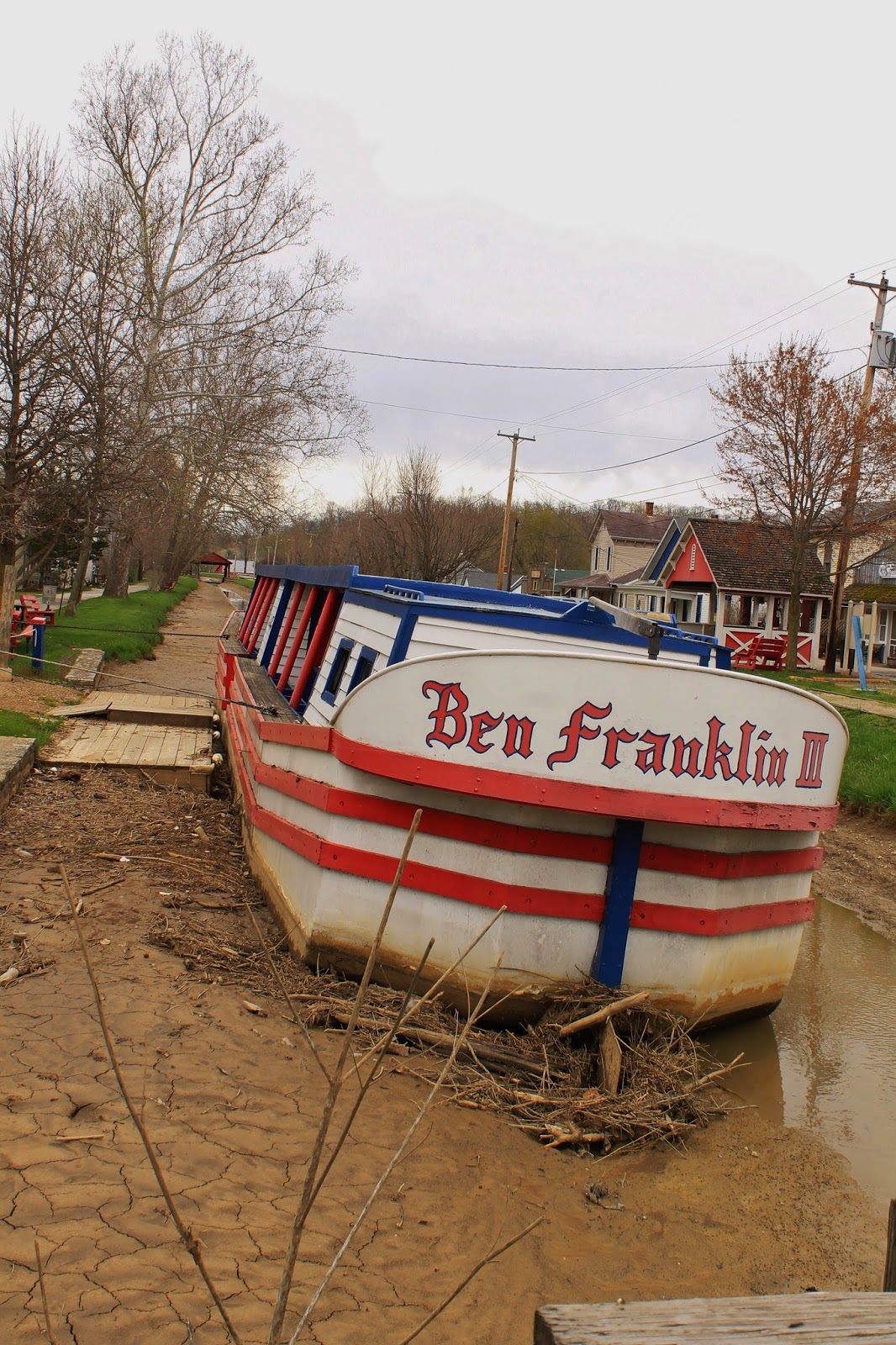 There are also a number of places we would have loved to go into. Lots of cute little shops and plenty of choices of places to eat. One place that was open was Grannies Cookie Jars and Ice Cream Parlor. She has over 1000 cookie jars and salt and pepper shakers. When you step through the front door you just have to stop and stare. Every available inch of space is covered with cookies jars in every shape, color, size, and character you can imagine and in between the cookie jars are salt and pepper shakers. 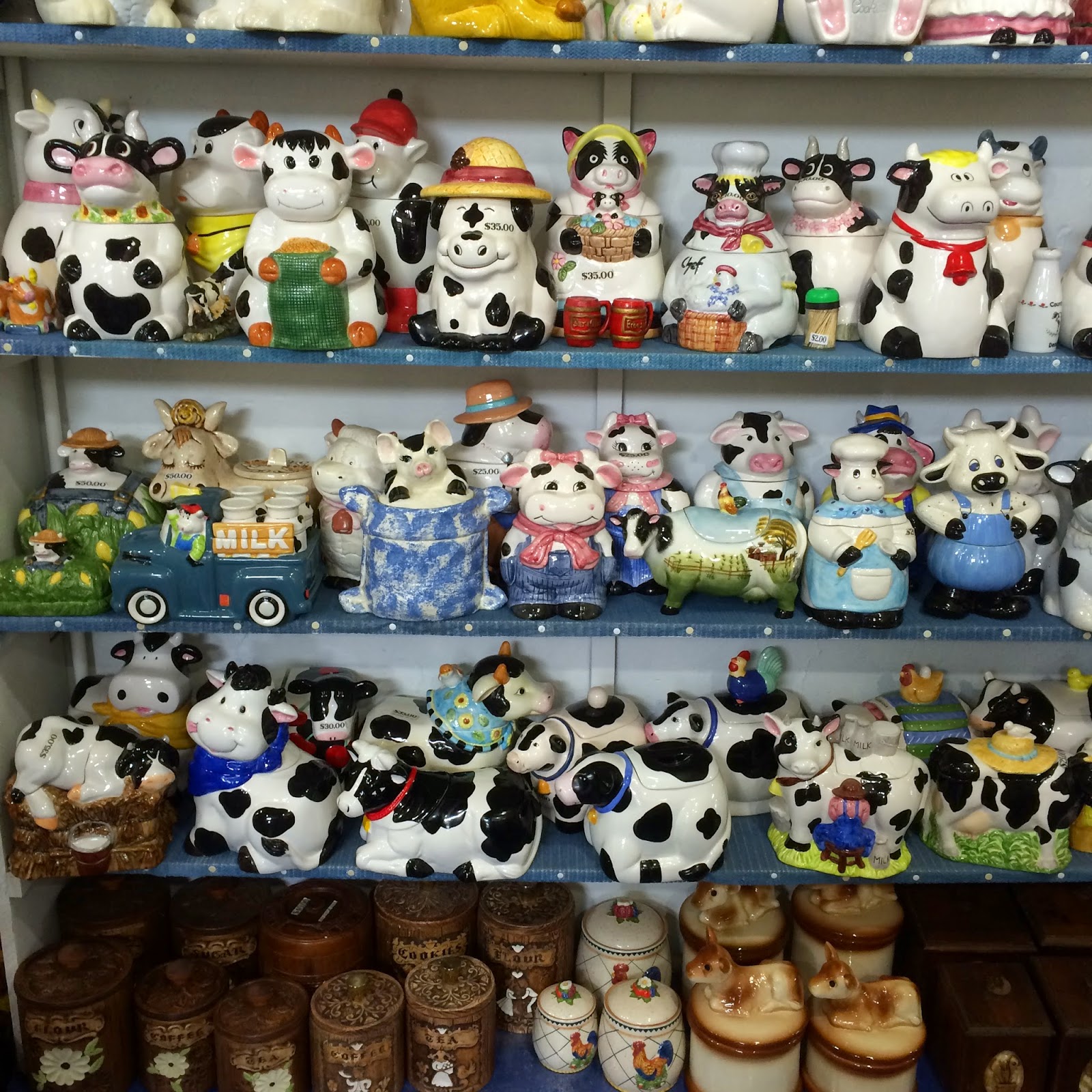 As you walk across the old wooden floor you can hear the tinkling of the glass jars hitting each other. We were terrified we were going to break one, and as the sign said "You break it - You buy it" and some of the jars were hundreds of dollars. It was such a fun place to wander and look. The owners father started selling them back in the 1980's after he had an accident and couldn't work. They had a few in their house along with other old dishes and he sold them at a flea market and people loved the cookie jars. He started getting more and selling more and the rest as they say is history. The ice cream was pretty good too!

There is a walking trail that takes you past all of the old locks - they keep them in repair for the historical value of them. Along the first part of the trail is an exercise path that has really nice gym equipment every 50 yards or so. Nancy decided to try her luck on the balance board - it was quite a hoot. When she turned around she realized that a DNR worker was sitting in his truck watching her - opps she didn't know she had an audience! 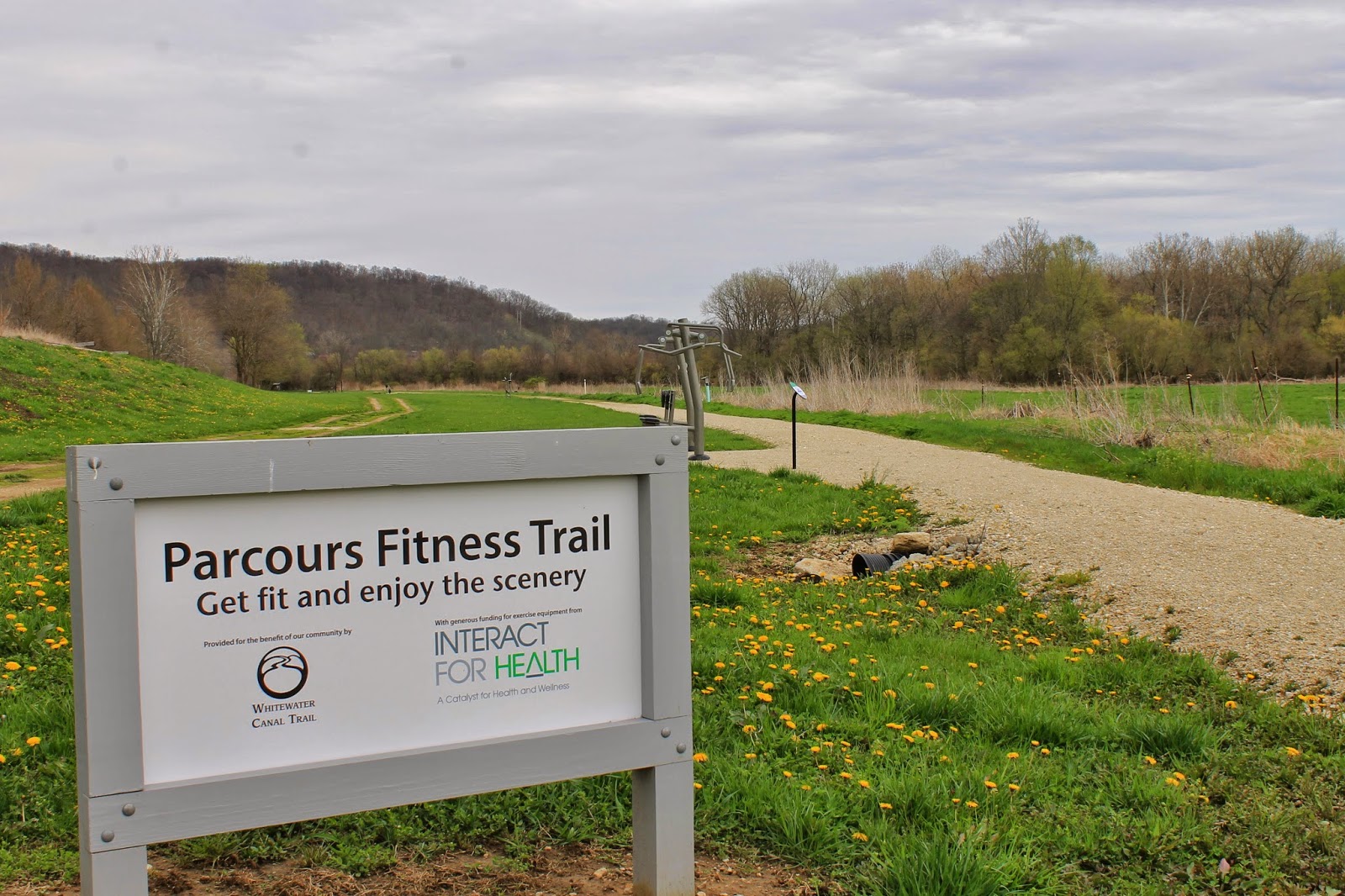 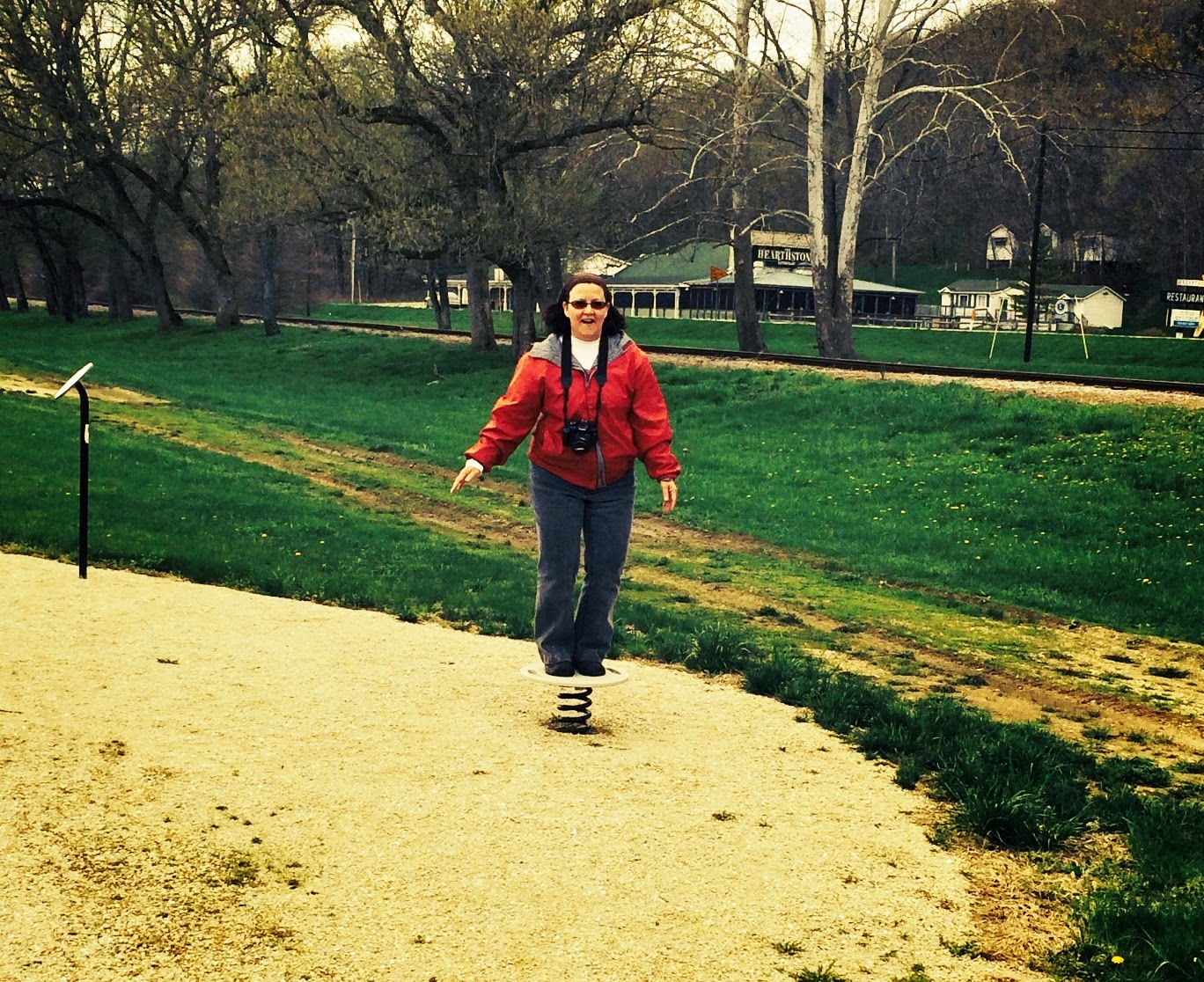 The canal runs along one side of the path and horse pastures are on the other side. We didn't quite make the whole 6 miles but the part we did cover was beautiful. The locks were pretty interesting and makes you wonder how hard it must have been to operate them. The items that some people leave behind make you wonder as well.

One morning before we headed out, Nancy decided to try out the gas stove for the first time (never in her life has she cooked on a gas stove) and was making bacon. She discovered that you need to drain the grease more often and turn the vent fan on, as she set every smoke alarm in the RV off! Once the excitement of the bacon was done we headed out to Oxford, OH, home of  Miami University, Katina's alma mater. There is so much that is still the same and so much more that has changed. The campus is growing by leaps and bounds, lots of new buildings but just as beautiful as it was. We drove past all of the places we remember going with Katrina, all of her dorm buildings, including Tappen Hall, her first dorm. It brought back a wave of memories of the day we left her there and how sad we were and how small and lost she looked in our rearview mirror. It was a rough first year but then she loved it.Other than a few store changes, uptown Oxford looks just the same. Our favorite Mexican restaurant, Fiesta Charra, was still there, but has expanded and now serves beer and wine. We took pictures with the pigs in the town square. Somewhere I have a family picture from Katrina's graduation. 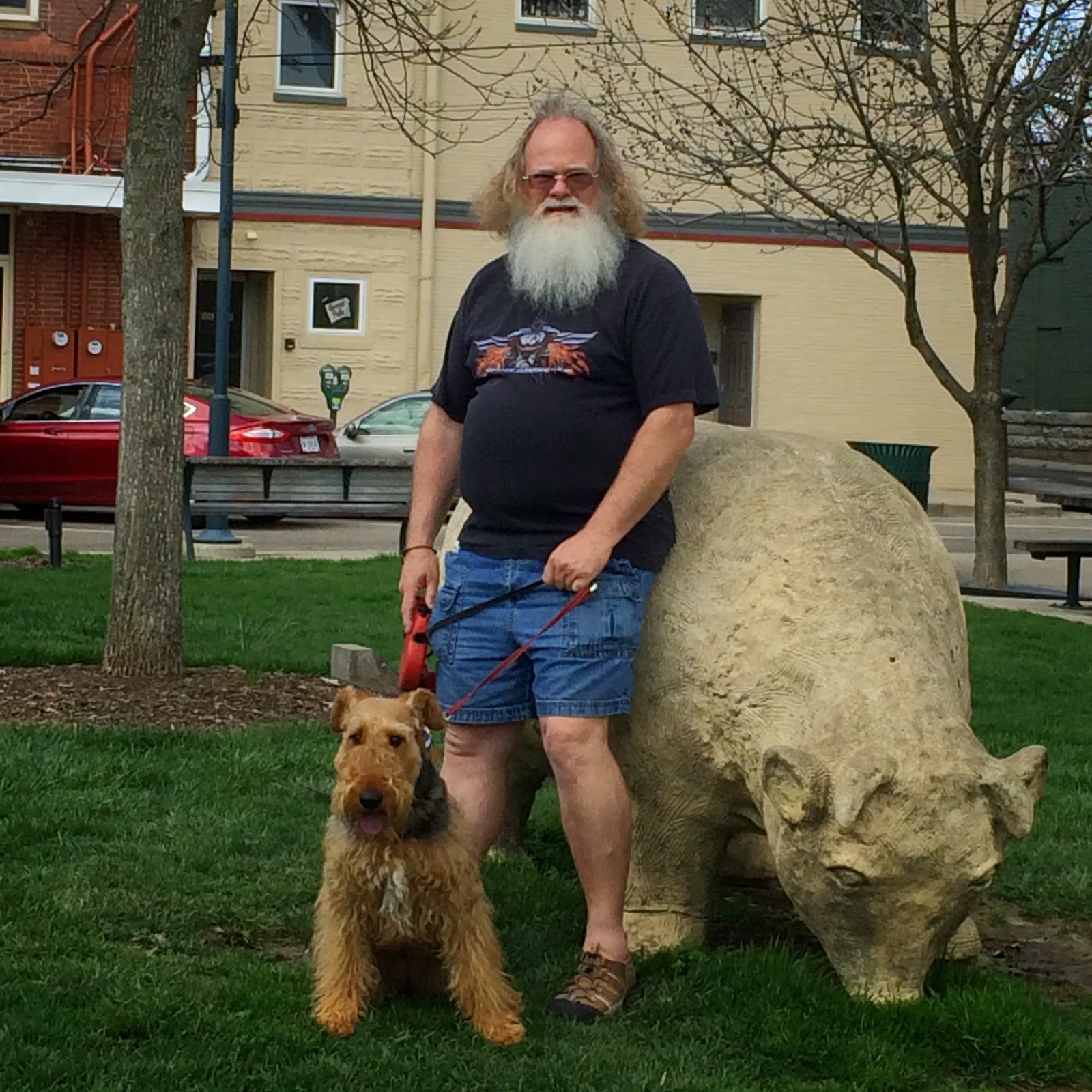 If you find yourself in Liberty, IN, stop in at the Liberty Bell restaurant for breakfast. They have the best biscuits and gravy Nancy has ever eaten and she has lived in the south! We went there on our last full day in Brookville and we were sorry that we hadn't found it sooner.

In case anyone wonders we really really dislike ants. We saw a few after we got the RV back from having the washer and dryer installed, killed those and didn't think much more about it. Saw a few again while it was sitting in Newport, KY, again killed those and didn't think much about it. Well, we should have thought about it - we are killing them at an alarming rate here in Brookville, we have sprayed and sprayed and I think we will be buying stock in an ant trap company. Let's hope we have gotten them all this time.

Tips and things we have learned so far
~ you should always have a cooler of some sort in your car with ice packs in it - not only for water to drink while exploring but for any goodies you buy along the way
~ engage with the locals, the shop keepers and others, after all they live here, they know the good places to shop, and eat, and the fun places to go.
~ when you see ants - assume there are more