Holland Michigan
We are so glad we decided to stay in Holland an extra week, as there is so much to see and do, even so we still didn't get it all in.

Now that it is officially "in season", we did run into a bit of a problem getting into the park, as we did not have a Michigan State Park Passport. We didn't needed one up to this point, so it came as a surprise that we needed one now. On top of the $350.00 we had spent for our sites we had to spend an additional $62.00 for passports (non-resident) so we could get into the park to our RV. We needed one for the RV and one for our car. We were not exactly thrilled about this. In Indiana, our campground receipt got us into every state park at no additional cost, which just makes sense.

We had many days of rain, which put a damper (pun intended) on exploring. But it did create some great fog. Nancy loves the fog, it brings back some fond memories of fog walks at her cottage when she was a kid. So walk we did. We walked out onto the pier where the canal leads from Lake Michigan into Lake Macatawa. Like most fog it would come in in waves and then clear almost as quickly as it arrived. 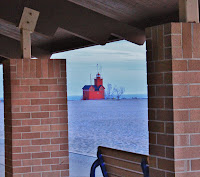 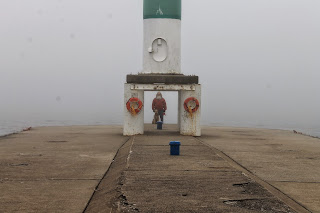 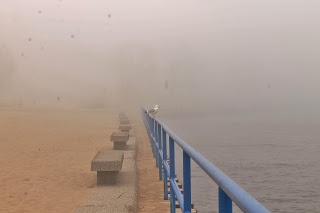 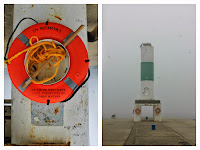 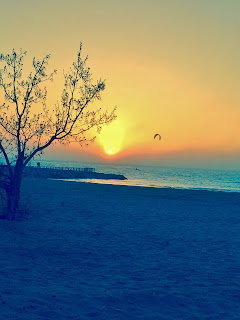 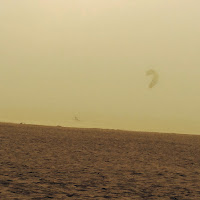 One of the foggy nights we saw a wind surfer, he was spectacular. He would sail out so far we could hardly see him and then he would float into view through the fog, lift and spin like a top and smoothly land down on the water. We were freezing just walking, and even though he was in a wet suit he had to be cold. 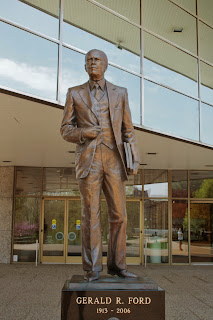 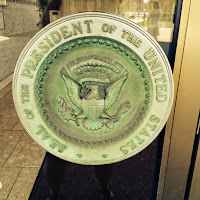 We took advantage of one of the nice days and headed to Grand Rapids. Our last few visits there had been during Art Prize (held in September and if you haven't been you need to go) so this was a much different visit, not as many people walking the streets. We went to the Gerald Ford Presidential Museum. It was laid out very nicely, and while some of it was somber due to the circumstances of his presidency it all was very informative. 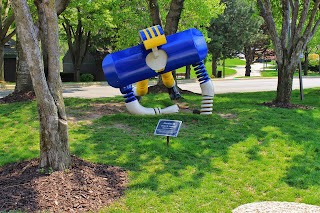 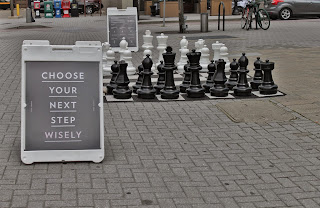 We meandered our way around town, choosing our steps wisely, and enjoyed some of the art work and buildings. 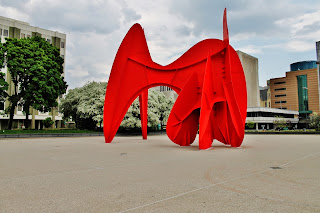 We saw the La Grande Vitesse, which is French for "the great swiftness" or "the grand rapids".  It was done by French artist Alexander Calder in 1969.


Accoding to the editor of the New York Sun in 1884. Grand Rapids was the first city of labor in Michigan. Who knew!
The Spirit of Solidarity Fountain, which was created to honer the bravery of the striking immigrant workers in 1911, sits in the Ah Nab Awen Park. Which is a former site of a native village. There are three distinct grassy mounds that represent Native American burial grounds. 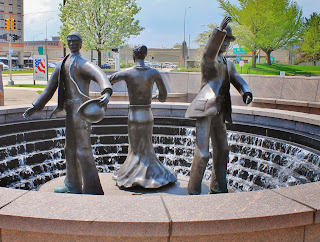 The woman in the sculpture represents the wives of the workers who supported the strike despite real personal hardships.  Careful, she's hiding rocks under her long skirt, just like the women did all those years ago in the one violent event that took place during the strike.
The older male figure waving his fist represents a Dutch Protestant worker who united with his fellow workers despite years of statements from church leaders that tried to use religion as a method to separate workers.
The third figure represents the immigrant Catholic workers (Poles, Germans and Lithuanians) who brought the value of solidarity with them from Europe and with waving hat in hand enthusiastically invited people to join the movement and march for the rights of all working people. (Borrowed from the MichiganLiberal.com page) 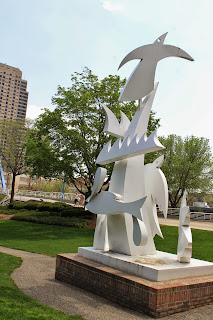 The Rivers Edge by James Clover, almost all of his sculptures are white. We found some interesting buildings and trees along the way and did some "reflecting" as well.


Again, we found ample places to fill our bellies and wet our whistles. In Grand Haven we tried out the beer at Odd Side Brewery. A favorite was the Chocolade Koffie Stout. This is in an old building along with a coffee shop we stopped at a few days ago, and a hat shop, Les got a new hat this time. There was a strange door in the hallway, must need extra security or something! 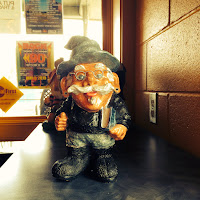 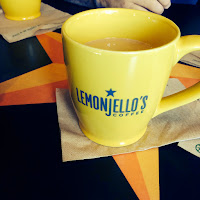 In Holland we enjoyed coffee more than once at Lemonjello's, a cute little coffee shop, with lots of table space, a nice window counter and an outside patio. The coffee was good and the nibbles were great. They even have a hip gnome to keep you company. We found the best breakfast place not far from the campground. deBoer's Bakery and Restaurant. Their corned beef hash was excellent, as well as the vanilla sugar bread french toast. The service was great. They have a bakery that has every Dutch item you can think of and the raspberry coffee cake was the best. 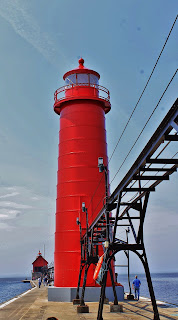 While in Grand Haven for beer tasting we explored the Grand Haven lighthouse, this is where the Grand River starts at Lake Michigan. For Nancy, who has lived her whole life by the "Grand River" - both

river and road - this was pretty cool to see. The walk out to the lighthouse takes you through a row of black iron trusses. Nancy felt like she was walking in Wonderland while under them. At one point we came across a group of high-schoolers that had spent the night in their hammocks suspended under the trusses. Oh to be young again! 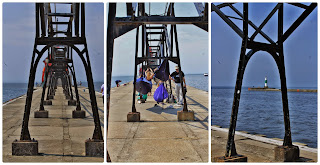 We have continued our search for Oddities or Roadside Attractions. We found a few of our own plus ones listed at RoadsideAmerica. 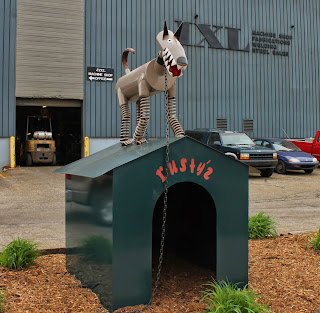 Rusty the Dog is one of many metal sculptures in Holland but the only one listed on Roadside America. 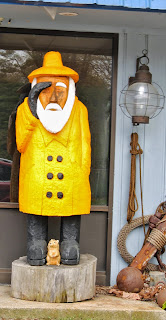 We really liked the old sailor dude in front of one of the marina's so had to include him in our pictures.

We did a walking and driving tour of Holland to see all of the art work and sculptures they have all over town. 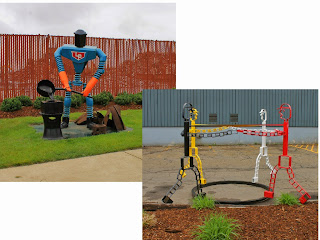 These are the other metal sculptures - they line Pine Ave as you come into town across the Unity Bridge. 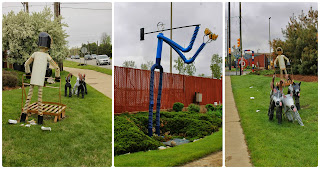 There are so many beautiful pieces throughout town and all the settings for them seem perfect. 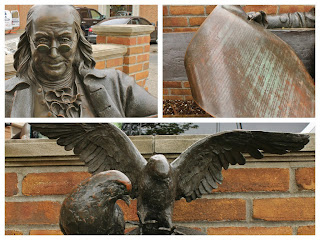 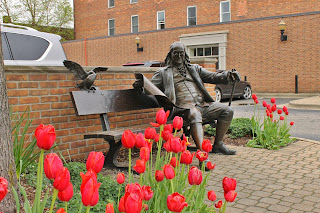 Ben Franklin hanging out with the birds and Les and Mielikki.

We also got to enjoy the Tulip Festival Parade and wander the carnival to watch all the crazy rides safely from the ground. 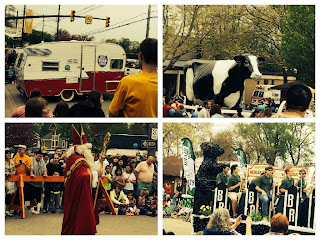 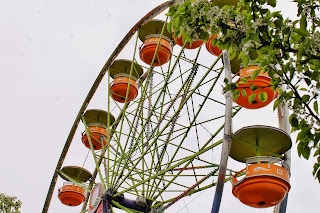 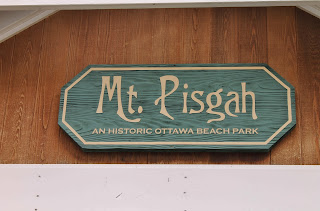 There is an overlook next to the Beach Campground that we found the name of very amusing. It is called Mt. Pisgah and it is a large sand dune. It is 157 feet up with a staircase of 230 stairs, everyone talked about it as if it was so high - which it is - but coming from Asheville where Mt. Pisgah is a 5,721-foot summit it just doesn't seem that high! 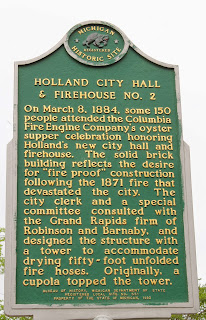 
One more name of a friend sign as well.


This wraps up our stay in Holland. We did encounter one more hiccup with the RV while here. We had to move to another site while in the Beach Campground. Not a problem, the jacks worked this time so we thought great no more issues. Well, we backed into our new spot, Les shut her down and then we decided to back her up a bit more and the RV would not start - dead - done and over. Turns out it was a simple fix - just needed to clean the battery connections and tighten them down. Snoopy dance was done when we figured that out!

Headed to the East side of Michigan next, to explore the southeast and spend some time with family and friends.


Happy Trails to you!


Tips and things we have learned along the way
- verify what you need to get into the state parks so there are no surprises half way through.
- check your battery cables before heading out and clean and tighten them so you don't scare yourself half to death when your RV won't start.
- when using a laundromat go in and check it out before hauling all your clothes in - that way when you discover it is disgusting you just leave and find the nice one in town. With no water we couldn't use our washer and dryer, so the second tip would be to wash cloths before you pull out from a place that does have water.
Posted by Nancy B at 9:06 AM