Drove to Chatham, IL on July 25, 2016. We were just south of Springfield, the land of Lincoln and portions of Route 66. We stayed at the Double J Campground. It is on the service drive of I-55 so there was some road noise, but very convenient for those just stopping overnight. 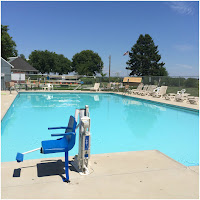 The sites are great, gravel but very level, wider than normal so not on top of your neighbor and very ample in length. There is a picnic table and a fire pit. 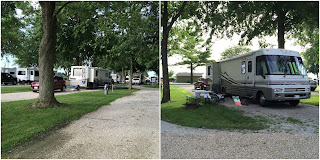 The campground has over 100 sites, some permanent, but well kept. There is a dog area, not fenced but a large area for walking. The laundry room and bathrooms were very clean. WIFI was good, and our Verizon service was strong. The pool was very nice, large with lots of chairs and a handicap lift chair. We paid $40 a night with our Good Sam discount. 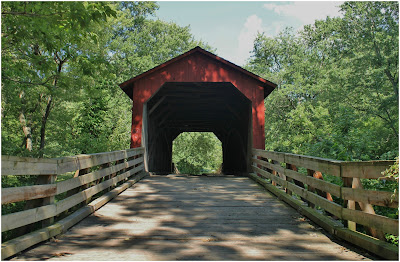 Sugar Creek Covered Bridge is just south of the campground. It sits in a small public park.


Abraham Lincoln was born in 1809 in Kentucky and at the age of 7 his family moved to Indiana. In 1837 he moved to Springfield, IL. The Lincoln Museum and Library is here as well as a number of other historical sites.

The museum was very nice, it is laid out in loops. 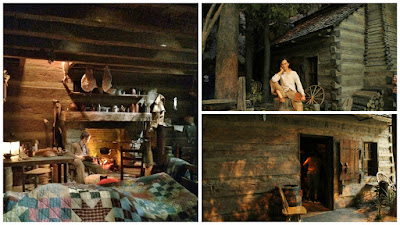 The first one takes you from his childhood home to his Presidential election. 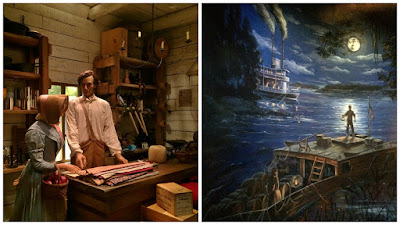 As a teenager he was restless and wanted to explore past the frontier. He built a raft and made his first money transporting people and products down the river. One trip took him to New Orleans which gave him his first glimpse of slavery and there was never a time in his life, he observed later, when slavery did not have the power to make him miserable. 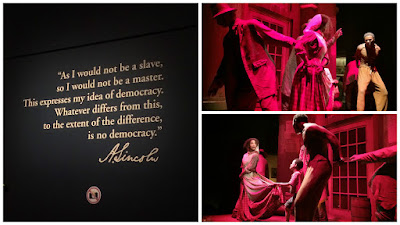 Abe met Mary Todd in 1840 while she was in Springfield vising family. They married in 1842. Willie and Tad, their two youngest sons, were given a great deal of freedom. Lincoln's law partner, William Herndon was quoted as saying "These children would come to our office - take down books - empty buckets - coal ashes - inkstands - gold pens and put them in a pile then dance on the pile. Lincoln would say nothing, so blinded was he to his children's faults." 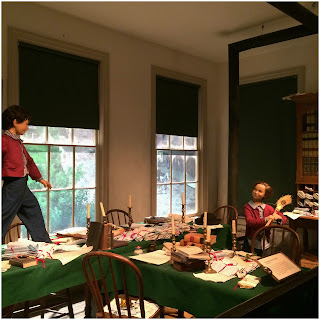 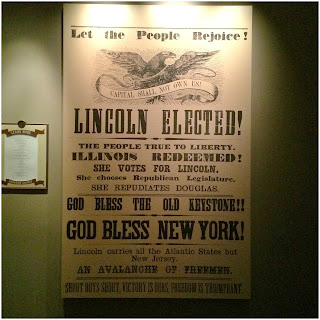 The second loop is the White House and takes you through his presidency and all of the turmoil of the time. 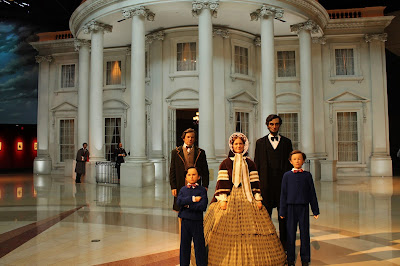 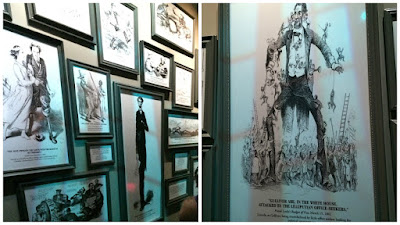 Like today there was no shortage of opinions from the press and the public. A whole room was depictions of newspapers articles and cartoons. 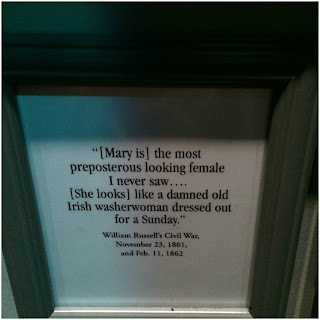 Also, very much like today the first lady could never do right! 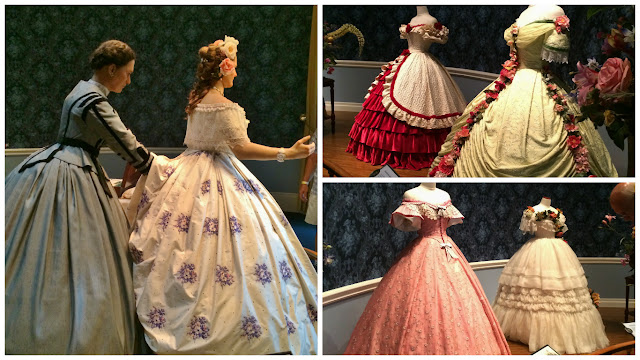 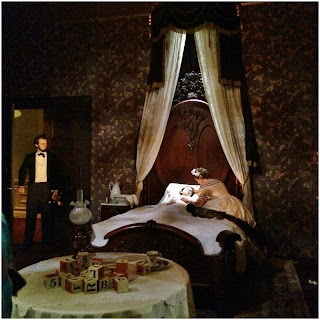 The festive night of the Presidential Ball was tempered with fear as young Willie was into the second week of being very ill, he passed away just weeks later.

Of course the Emancipation was the biggest news of the day. Can you imagine what TV news reports would have been like? Yikes!

The war took it's toll on the whole country. 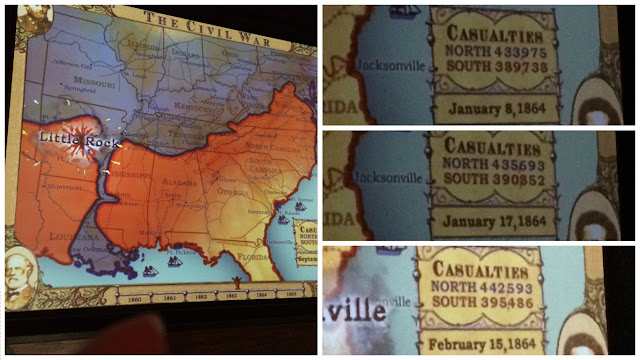 It also took a heavy toll on Lincoln. He visited the telegraph office many times a day to follow the news of the war. 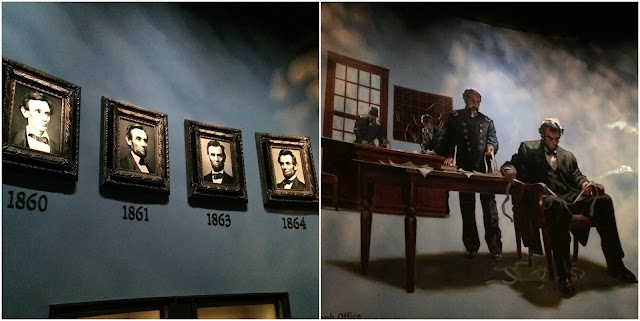 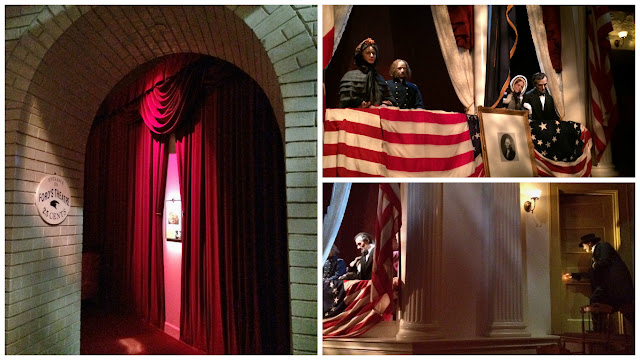 In between the loops are an art gallery and two movie theaters, both movies were very informative, there is also a gift shop. 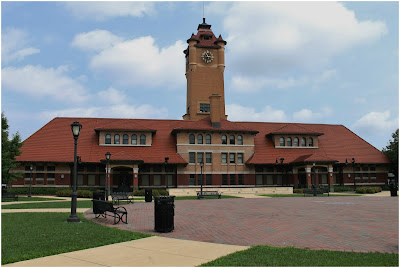 Union Station has also been turned into a museum. The exhibit is rather small and is strictly about Stephen Spielberg's movie Lincoln that came out in 2012. We bought the combination ticket packet that got us into this exhibit and the museum, in all honesty we would have been a little disappointed if we had paid $12 to see just this. 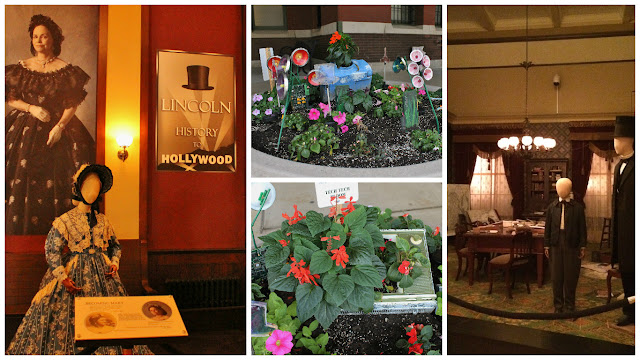 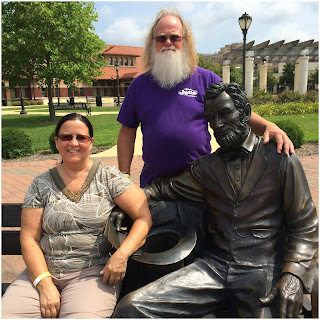 The building is beautiful as are the surrounding grounds, with interesting flower pots and additional statues. 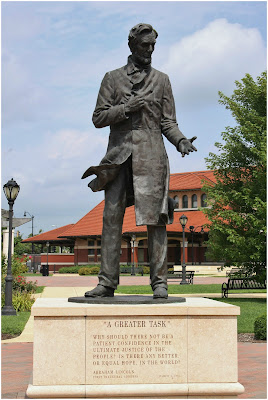 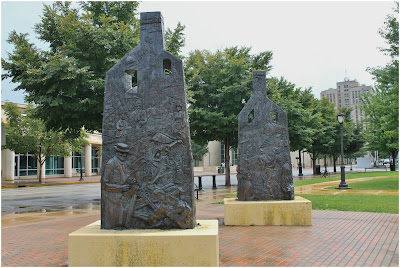 The two "charred" chimneys represent the ruins left after the race riots in August 1908. 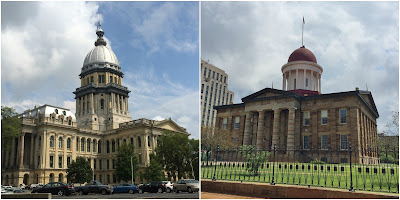 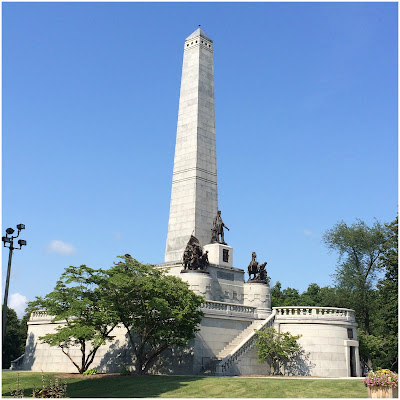 Lincoln's Tomb is located in the Oakridge Cemetery. It is a large tomb that has a number of statues and displays in it. You cannot go past the first level, as the railings no longer meet the safety requirements for height. 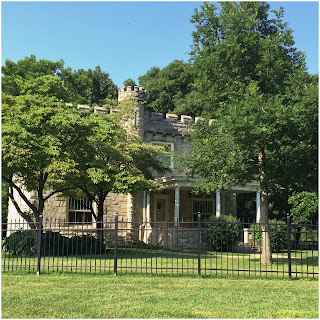 At one time the caretakers family lived next to the tomb. There house was a small castle. We thought it looked like a pretty cool place to live.


We toured the Dana Thomas House, it is the 72nd house designed and built by Franklin Lloyd Wright, and his first "blank check" commission. The 12,000 square foot home has 3 main levels and 16 varying levels. It has the largest collection of site-specific original Wright art glass and furniture. It was built in 1902 for forward thinking socialite, Susan Lawrence Dana.

Springfield has a number of Roadside Oddities and we had great fun finding them. 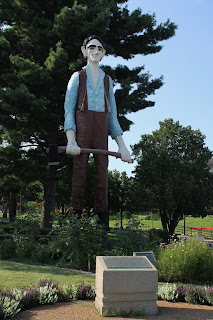 Of course there were some of Abe. A young Abe greets you at the entrance to the State Fairgrounds.


There is also a very tall Abe Totem Pole and a pixel mural on the side of a building. 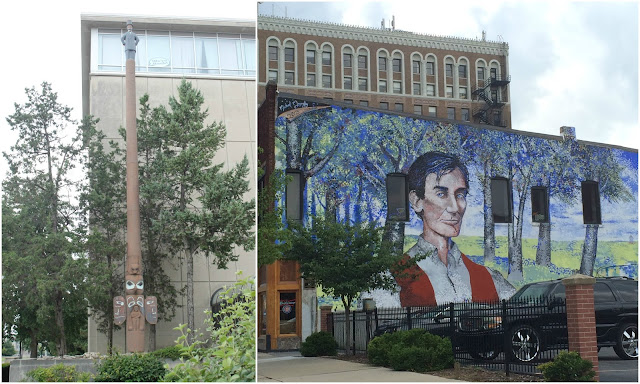 Next up is Utica, IL

Tips and things we have learned along the way.
~ Keeping connected 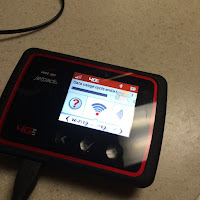 While most campgrounds offer a free WiFi service, not all do, and not all WiFi is created equal. In a number of campgrounds you really need to be sitting in their office to get the WiFi to work!
We admit that we cannot go without WiFi. We do not watch TV, so the internet is our connection to the world, as well as friends and family.
The hotspot on our Apple phone was our go to last year, and while Verizon signal is pretty strong in most places there are a few spots where it is not and the hotspot doesn't always work.
This year we got a Verizon Jetpack and it works much better than the hotspot when we have less signal. So we can keep up with all that is happening in the world, and play a game or two!