Nancy's sister Linda lives in Warren along with her niece Becky and her family, husband Jeff and two boys Luke and Grant. We had a great visit with all of them. 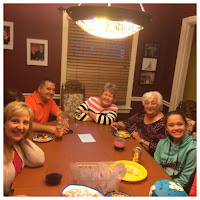 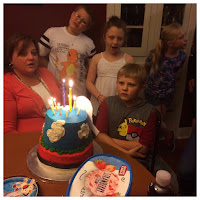 We were fortunate enough to arrive on June 9, 2017 which just happened to be Grants 9th birthday. Becky had a family barbecue to celebrate.
Fun was had by all. Grant can be a bit shy at times but his brother Luke makes up for that!
Grant received a new gaming system for his birthday and when he opened it he looked at Luke and said "Look what we got". Luke then received a set of controllers and was beyond excited.

The party extended into the wee hours for Linda, Becky and Nancy - yes they paid for it the next day. Poor Linda and Becky had to go to work! 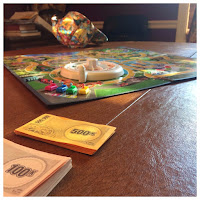 We really enjoyed the down time just hanging out chatting and drinking coffee. Game night with the boys was a hoot, and Nancy didn't realize she should have dressed in character!


Kathy, Jeff's mom let us park our RV on her farm. We were so grateful to have a safe place to leave it.

Home at last. While we now refer to Asheville as home, Michigan will always hold that title as well. 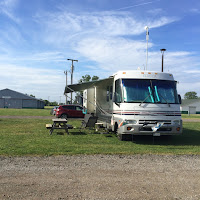 We stayed at the Wayne County Fairgrounds in Belleville arriving on June 13, 2017. The park is off of the I-94 service drive but set back far enough that the road noise is minimal. This is your basic fairgrounds park, gravel sites with a strip of grass. The sites are pretty narrow, and you can request a picnic table and fire ring if you want them. We had full hook-ups and the WiFi was pretty good. We paid $35.10 a night with our Good Sam Discount.
One week is just not long enough but we take what we can get. It makes it impossible to see everyone we want to see and of course our main focus is Katrina and Steve. There were a few lunches - pretty sure we gained some weight on this stop. 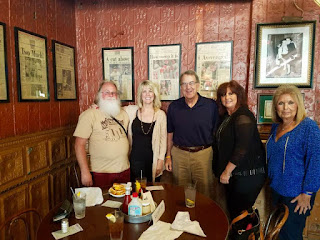 Les had lunch with the staff from Teamsters Local 214 and ran into Coach Carr while there. If you are like Nancy and have to be told who that is - he was the coach at University of Michigan.

Nancy had coffee with Terry, they met while she was the secretary at St Paul's Lutheran School where Katrina attended. Then she sold PartyLite with Nancy for a number of years. No picture but we had a great time catching up with each other. 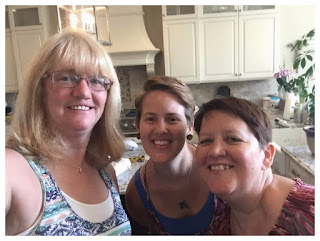 Both Nancy and Katrina got to tour Lynne and Tom's new home while enjoying lunch with Lynne and Gail. Nancy and Gail have known each other since Kindergarten - yes, that is a very long time. It is always wonderful to spend time with them. 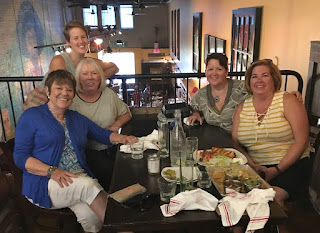 We also laughed really hard at the memories brought up at lunch with Mary Ellen, Lee Anne and Erika, another group that goes way back almost 30 years. These women were a big part of Katrina's childhood and for that we are both grateful.

The Bryson family came for dinner one night. Les's niece Jennifer, her husband Jim along with Sophia and Barrett. So nice to hang out and just chat. Sophia is just back from 5 months in Honduras and Costa Rica so it was great to hear her stories. Barrett just got engaged and we did have to laugh at his proposal story. Once again we didn't get any pictures - this is now becoming a family joke!

We always save at least one day with just Katrina and Steve and this time we spent a wonderful day downtown Detroit with them. There are a lot of people who do not like going to Detroit, but we love it. 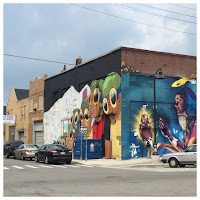 Eastern Market has always been a favorite place so we hit that first. Sampled lots of yummy food and bought a ton of fruit and veggies.
Then we walked along the RiverWalk.  Wow!! They have done such an amazing job on it. So happy to see this. In our travels we have been in a number of cities that have created such cool places along their river fronts and we have always been sad that Detroit never used theirs to its full potential. Well, it has now.
The wide walkway gives ample space for walkers, joggers, strollers, wheel chairs and bikes. So many people out enjoying a beautiful day on the river.
There is a carousal, beach volleyball court and a food area along with plenty of places to sit and relax. Lounge chairs, benches and Adirondack chairs line the entire river. 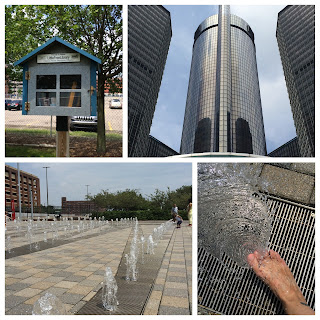 Our walk started at the Ren Cen. There are water fountains to cool off and play in. We saw a number of small library house. They were filled with both adult and children's books. As lovers of books this made us very happy. 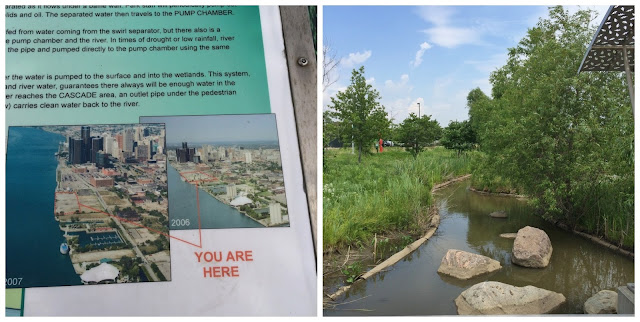 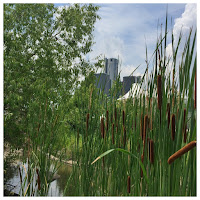 Green space everywhere, including a wetlands. Yes, wetlands where once there was a cement factory. As you wander the path there are places you can cross the river that is home to turtles, fish, frogs and birds. Never did we imagine that you could take a picture of the Ren Cen with cattails in it!
Art work dots the landscape as well. 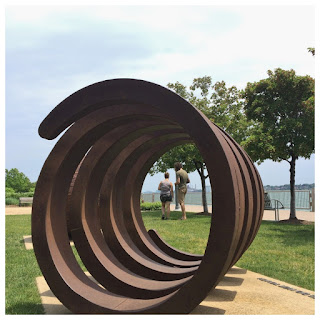 We were treated to a display from the fire boat. Brought back lots of childhood memories for Nancy. 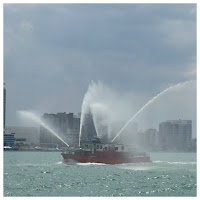 Just when you think it can't get any better you come across the Outdoor Adventure Center. 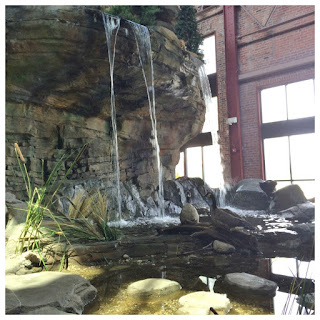 The theme is Bringing "up north" to downtown Detroit. They have accomplished this and more. A space that gives urban kids a chance to see, touch, and hear parts of nature they may not other wise experience. We all had great fun playing along with all the kids! 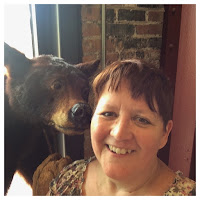 There is a large crop plane to climb in, swinging bridges to cross, rocks across the river to hop and bikes, kayaks, and snowmobiles to ride.


In one section you can "catch" fish and another has recordings of bird calls and the bird lights up on the wall. 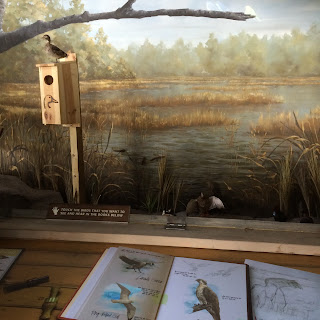 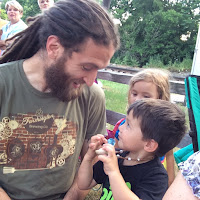 Then we enjoyed a Beatles's music review at the Northville Winery while catching up with Amy. Amy and Nancy met 17-years ago while working at Scott Publications. Sharing stories and hard cider made for a perfect evening. Didn't get any pictures of Amy but did get some of Steve and his new friends and Kat and Steve. These two little kids were enamored with Steve's dreadlocks and chatted non stop. They were pretty darn cute. 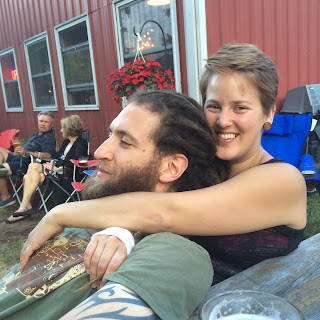 The day wasn't done yet as we headed to the 40th birthday party for Nancy's nephew Michael. We missed the surprise part but as it turns out it wasn't much of a surprise as Michael came home early from work.

We did get to see a number of Michael and Becky's friends that we got to watch grow up. 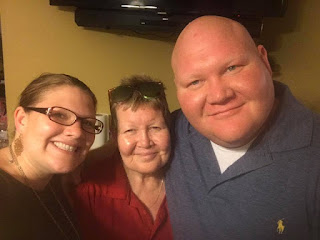 Of course Linda and Becky again!


A big thank you to Becky for capturing the moments so I could steal her pictures to use here.

On Sunday, Les drove to London, Canada to see his family there and join in the reveal of the Roadster. His Uncle Don built the roadster almost 40 years ago for his daughters wedding. When Aunt Pat passed away the roadster was put in storage and hasn't been taken out for the last 18 years.
Steve, Don's son pulled it out and refurbished it and started it back up on  Farther's Day. Uncle Don and Aunt Pat have always been a big part of Les's life so it was perfect that he was there for this big event. 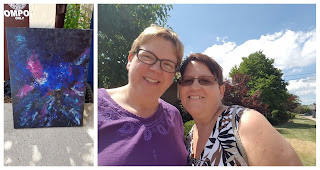 Nancy and Connie got to do some art work while catching up with each other. The galaxy painting is to be used at her daughter Kim's graduation party for the guests to sign.

Then Nancy joined the Fox family for a picnic at Kensington State Park. A family favorite park since Nancy was a child and continued with Katrina.
We met at the Nature Center where we enjoyed watching the large snapping turtles and checking out the displays. 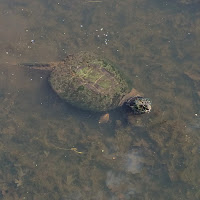 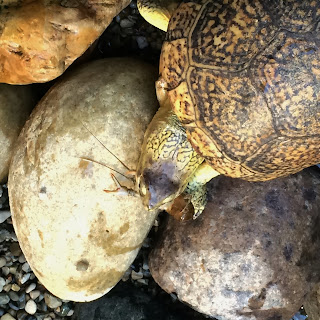 Our timing was perfect as we were able to watch this guy eat his lunch of crawfish. Steve's nieces Cora and Sydel were especially thrilled as was his mom, Anne. Turtles and tortuous are here favorites.

Then we enjoyed a delicious picnic and some down time. We celebrated Nigel and Mike as it was Father's Day. Les was in Canada so he missed out on this part. A big thank you to Anne for letting me use her pictures from the picnic.

It was the perfect day, blue skies with fluffy white clouds and a nice breeze to keep us cool.


We are truly blessed to be able to call these people family.


Good-byes are always so hard but as we say without them we wouldn't have been together.

Now we kick it into gear and make a mad dash to Colorado.

Tips and things we have learned along the way
~ Keeping our cool
We have discussed a number ways that we use to keep the RV cool on hot days. With very little insulation it can heat up pretty quickly. One way is the vent covers we purchased at Camping World. Table top fans help a lot as do the small fans we attached to the vents. We have also shared how we cover the windows with aluminum sun shades. Since the original tip we have improved on the design. Our large front window brings in a lot of heat on a sunny day. But sometimes the sun is only coming in one side of the window and we hate not being able to see outside all the time.
The solution was to cut the shade into four separate pieces. Now we can can cover individual sections at a time. We use 3M-Command hooks and Velcro strips to hold it in place. 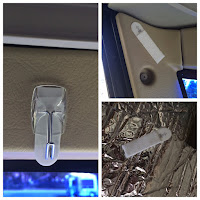 Being in sections also make storing them easier. They fold up flat and fit behind the sofa. 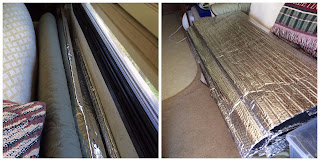 We have made one to fit every window in the RV including the door. 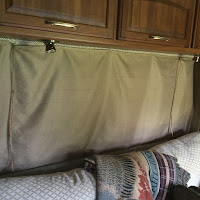 They slide over the pull down shades and by cutting a slit in the bottom the shade knobs hold them in place. The black out curtains that Nancy has made pull down in front of them. This gives us three layers of protection not only from heat but from cold as well. 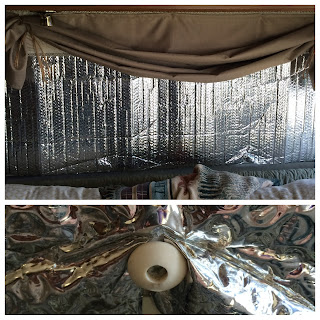