Greenwood is about 20 minutes west of Charlottesville, VA and where we landed on May 29, 2017. 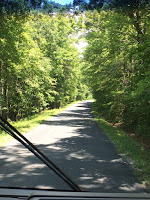 It was quite the drive. Lots of back roads which sometimes can be a challenge for a vehicle as big as ours. If that wasn't enough to make us nervous the black smoke billowing out of the rear drivers tire well did the trick.
We were about 5-miles from camp on a narrow road that was next to impossible to pass anyone coming from the opposite direction let alone stop and pull over. Every time Les hit the brakes more smoke came out. Just as we pulled into the campground our smoke detector started screaming. Les immediately went to check it out and there was a great deal of heat coming from the area but no fire could be spotted. Luckily there was a local mobile RV mechanic. Richard from Bell Performance Enterprise LLC (dba Mobile Mechanic) came out to take a look at it. He discovered that when we had the brakes done in Texas they must have damaged the seal on the half-shaft and it finally broke and fluid started leaking. It did catch fire but because we only were using the brakes intermittently it never got a chance to get going strong. If it had the whole thing may have gone up in smoke. We are so thankful that we didn't lose everything. We are truly very lucky and someone was watching out for us that day. 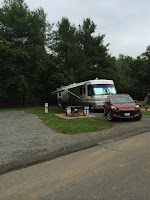 We stayed at the Misty Mountain Camp Resort and got one of their last open spots that was available for a whole week. The site was a back in and right on the road so there was a fair amount of road noise. All sites are gravel with an average width patch of a grass, and behind our RV was a large grassy area. There is a cement patio with picnic table and also a fire ring. The camp is quite beautiful and large. There are four different sections from full hook-ups to primitive camping. 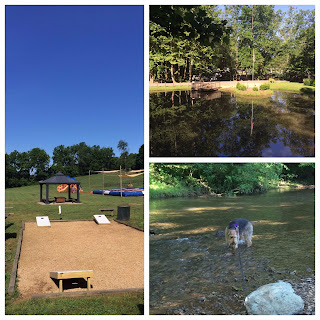 A creek runs through the camp and there is a small pond. They have a large open field with two playgrounds, a large air pillow for jumping, corn hole, and a stage. The dog run is good sized and shaded by trees. The laundry and bathrooms were very clean. The general store has all your basic needs. WiFi was okay when the camp wasn't full but didn't work at all over the weekend. Verizon signal was strong. We paid $52.47 a night with our Good Sam discount.

You would be hard pressed to throw a rock around here and not hit an historical site. We hit quite a few, well not with a rock but...

James Madison Montpelier was first up. His grandfather, Ambrose Madison received a patent for 4, 675 acres of land in 1723. Little did he know that his grandson would later be a part of the revolution on that very land. The property now covers 240 acres.
Not only can you tour the house but there are over 8-miles of trails that take you to exhibits and through the Demonstration Forest. There you will find trees dating back to Madison's days here. 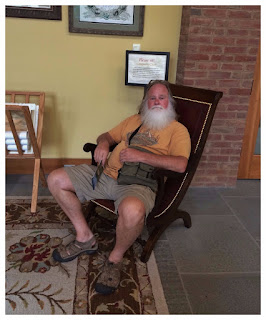 You start off in the Visitor Center where there is a gift shop and a cafe. Les found a comfortable place to sit and view the map of the property.  The Campeachy Chair was the former president's favorite seat. They really are quite comfortable.
From there we took the trail to the families graveyard and the slave cemetery.  Madison's headstone is a large obelisk but nothing out of the ordinary for the time. 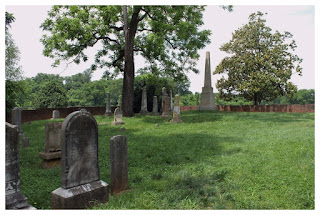 Once again the slave cemetery, like all the others has no grave markings, it is just a large field covered in grass now. 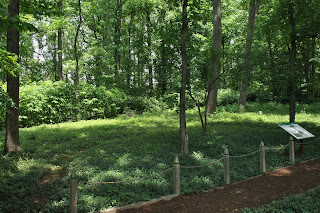 It is hard to understand how the men who built this country continued to keep slaves. Madison, like Jefferson was troubled by this and even called for slavery to be abolished but never acted personally to end it on his own property. 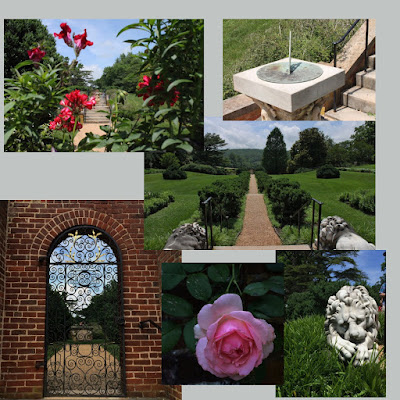 The Annie Dupont Formal Gardens are named after Annie Dupont who owned the home in 1900. As you walk through the beautiful iron gates you enter a 2-acre oasis of boxwood's, trees and flowers of every type. 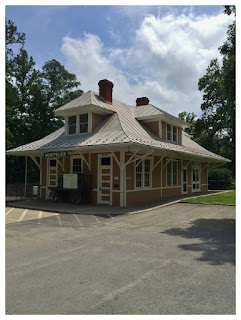 Just outside the gates of Montpelier is the 1910 Train Depot. It has been restored to the way it was in 1910 to document a time of legalized segregation. It also serves as the current post office. 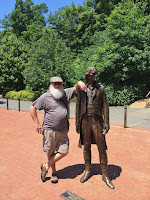 Thomas Jefferson's Monticello is the whole reason we came to this area. Jefferson is Les's favorite president and we both have read a great deal of his work and books about him. We spent a whole day here. The Visitor Center area holds the ticket office, gift shop, cafe, movie theater and a museum. 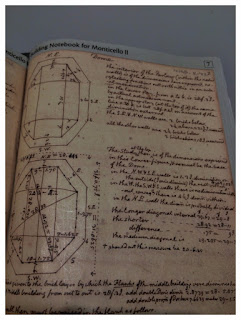 In the museum there are copies of Jefferson's journals which were very interesting to flip through.
You can pick up the shuttle to take you up the mountain to the house or walk the trails. We took the shuttle up and walked back down.

You only tour a small portion of the house, our tour guide, Tom (yep, that was his name) was so good. Like every other place, no pictures are allowed inside the house. It was interesting seeing the things that he surrounded himself with.  As an avid reader and constant learner books were number one. There is only a handful of his original books as he sold his library to the government, which is how the library of congress got its start.

Under the house is a large ice house and tunnels that take you to the beer and wine cellars. He had dumb waiters installed along side the chimneys so wine bottles could be easily delivered to the upper floors 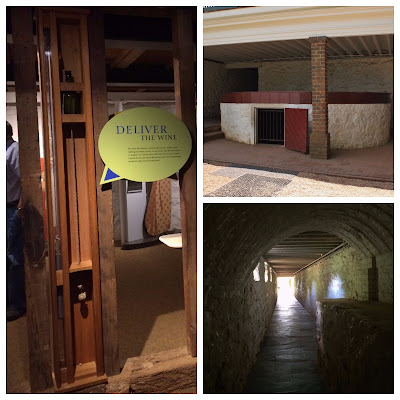 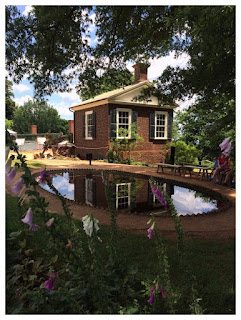 While the main house was being built he and his wife lived in a very small house which is now called the south pavilion. It is right next to the fishing pond that on this day was filled with 100's of tiny tadpoles. 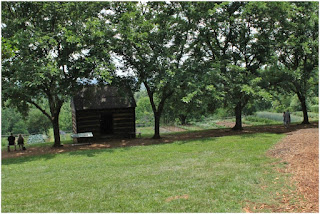 Mulberry Row is where the slave quarters were, there is only one building left but there are ongoing archaeological digs here as well. A number of the slaves learned trades that they used once they were freed.

The Jefferson Family Grave is a short distance from the home. It holds 19 graves from the late 1700's to the early 1800's. The oldest grave is Jane Randolph Jefferson (1720-1776), Jefferson's mother. The latest grave was from the 1990's as current descendants are still buried here.

Jefferson left explicit instructions for what was to be put on his headstone. The three things that he felt were his most important accomplishments. He drew a sketch of what it should look like and what it should say
...on the face of the Obelisk the following inscription, & not a word more:
Here was buried
Thomas Jefferson
Author of the Declaration of American Independence
of the Statute of Virginia for Religious Freedom
& Father of the University of Virginia 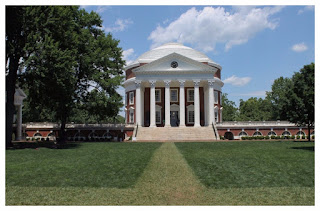 When he designed the University he made the Library the center of it, unlike other universities of the day which had the chapel as the center focus. 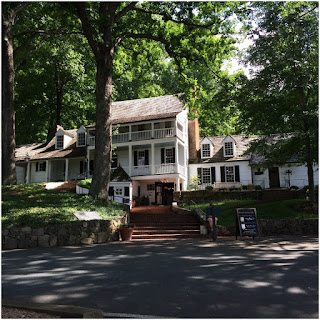 Our stop at Michie's Tavern wasn't exactly what we thought it would be, but enjoyable anyways. When you purchase lunch you get a discount on the tour, which is what we thought we had done but apparently the $60 we spent for lunch didn't include the tour. By the time we realized it Nancy was so frustrated that lunch was so expensive that we didn't go back in for tour tickets. Lunch was good - a "Southern Fare Buffet", but not worth the price. Corporal William Michie opened the tavern - called an Ordinary at the time - in 1784. It was a popular place for travelers coming to the nearby courthouse. There was always lively political conversation as Michie was a strong supporter of the revolution.

Crabtree Falls was our nature day on this stop. It is the highest vertical-drop cascading waterfall east of the Mississippi River. There are a series of five major cascades and a number of smaller ones that fall a total distance of 1,200-feet. The first overlook is just a few hundred feet from the parking lot on a paved trail so anyone can get to it. 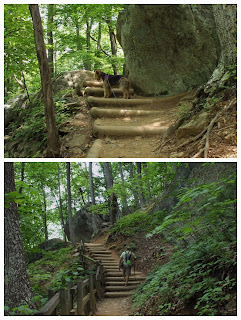 The rest of the trail, 3-miles round trip with a 1,200-foot incline/decline is a bit more adventurous. While it is a very rocky path with lots of tree roots, it was so beautiful we just kept pushing ourselves to go farther. 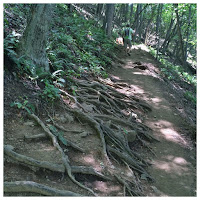 There were a number of interesting things for Nancy to stop and take pictures of - always a good excuse to stop and rest. 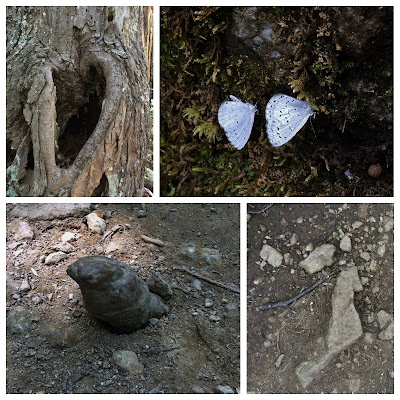 Tree trunks with hearts in them, pretty moths, a tree root that looks like a bird and a rock that made us think of a seahorse where just some of our finds. 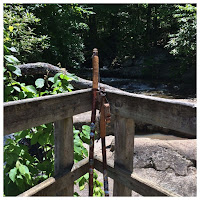 We were very glad we had our walking sticks with us, especially coming back down the trail. 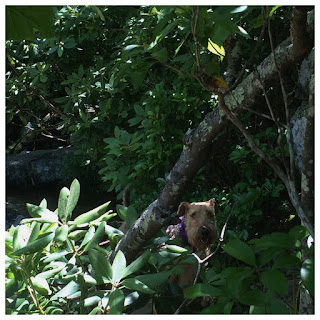 Mielikki had a blast in the water and is smart enough to search out shade whenever possible.

Nancy was wishing that the Captain was carrying her instead of the other way around. 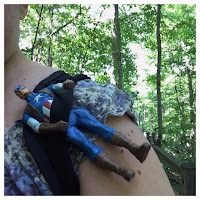 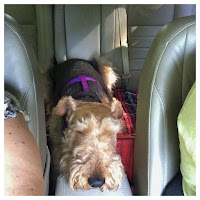 All three of us were pretty worn out when we were done. Mielikki even slept in the car on the way home, something she never does.

Woodrow Wilson's Museum and Library are in Stauton, VA. With Nancy's maiden name being Wilson we of course had to go there. It is said that when Nancy's grandfather came to America from Finland he changed their name from Sjöblom to Wilson (who was president at the time) to become more American. The Museum complex is in the middle of a neighborhood and encompasses three old houses. 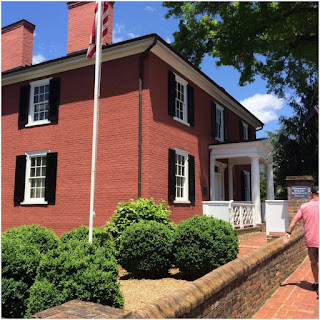 One of which is where Wilson was born, you tour the home but once again no pictures are allowed.  Behind the houses is a large garden that at one time was filled with boxwood's but they had to be removed due to disease. The current plans for the garden are still in the planning stage.
The museum is actually pretty small but does highlight Wilson's life and career. 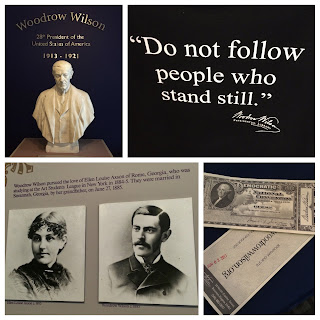 The basement has been turned into a war bunker which even includes sound effects. 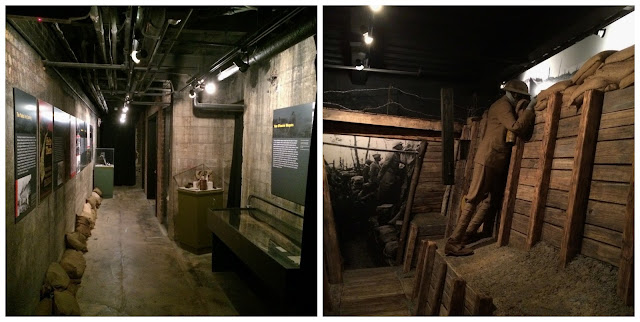 Next up is Elkins, WV and then Newel, WV for two night stays each before time with family.


Tips and things we learned along the way
~ Be prepared while hiking.
Most State and National Parks have informational boards at their trail-heads. These boards offer maps and trail details. They also usually include emergency contact information. We take a picture of the contact information with our phone. This way if we should encounter an emergency we have easy access to the info. We also pay attention to mile posts or other trail markers so that if we should need to direct emergency personal to a spot we can narrow down where they need to go. 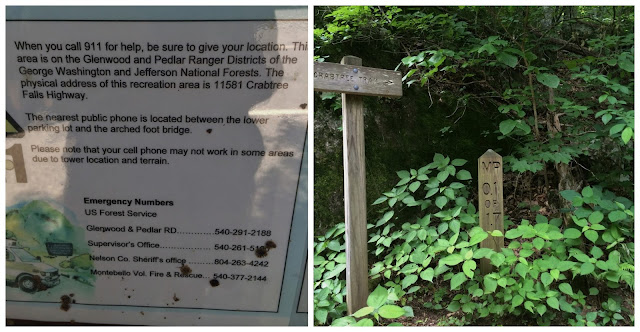